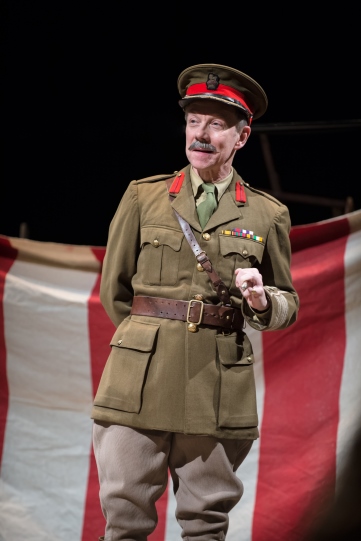 In this hundredth year after the outbreak of World War I, there has been no shortage of art inspired by the anniversary. The installation of poppies at the Tower was clearly the most salient, widely praised for being brilliant and yet transient. By contrast, and despite how much it infuriates Feedback correspondents, we’re stuck with Radio 4’s ongoing Home Front series for the next three years. ‘And they said it would be “over by Christmas”…’

In short, the arts scene is already saturated with war-inspired work and now critics may readily dismiss the arrival of any more. And yet into this hostile environment, like army generals sending their men over the top, the RSC pushes its latest production.

Named as it is, The Christmas Truce unsurprisingly centres on the great and doubtless highly romanticised episode in the Great War, when Tommy and his enemy lay down their weapons, if only for only a day. Here – in this telling sans £1 chocolate bar – Phil Porter draws on the experiences of the Royal Warwickshire Regiment from recruitment in the haze of an English summer to the resumption of battle in the coldness of Boxing Day. 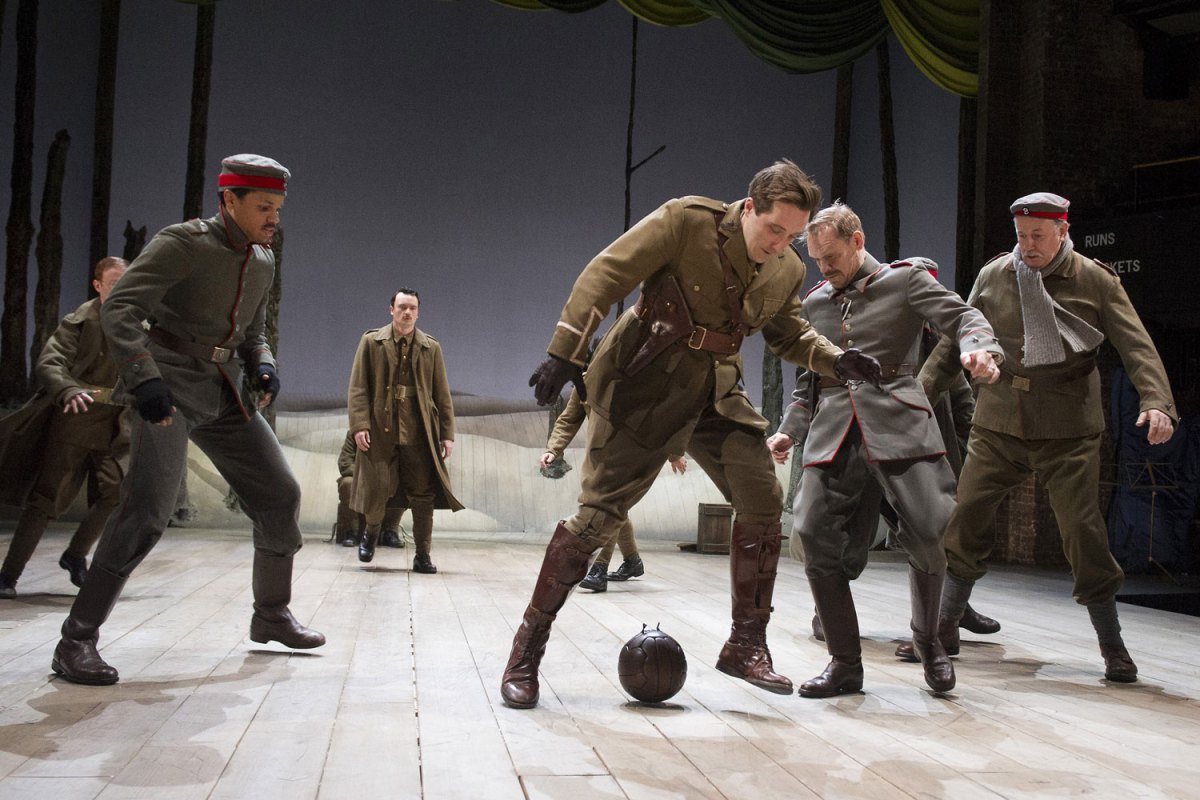 The RSC’s production of ‘The Christmas Truce’ centres on the well-known act of peace between fighting soldiers.
[PHOTO: Alastair Muir] 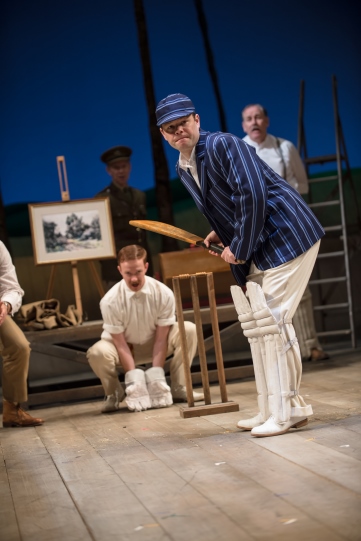 A fairly common trick, if not tiresome gimmick, in contemporary theatre is for the cast to directly involve audience members whilst the house is still filling. The Royal Shakespeare Theatre’s wonderful thrust stage particularly lends itself to this device: thus, one by one, boys (and eventually a couple of the girls) bravely made their way up to the village fair coconut-shy on stage, all giving it their best shot. To be fair to the RSC, I think here the contrivance worked – it built up the sense of conviviality, ready to be torn down by the abrupt arrival of war – but it is nonetheless a technique I am already beginning to find clichéd and overdone.

An enlistment exercise introduces us to the play’s hero, Second Lieutenant Bruce Bairnsfather, on whose cartoons and memoir Porter’s script is based. Superbly played by Joseph Kloska, he is shown as a kind and friendly officer, intensely likeable, and equally respected by colonels and privates alike: it is for this reason that, at the end of the Truce, military commanders give him the command to instruct the soldiers to return to the trenches. “They’d take it better, coming from you,” Faulkner (Jamie Newall) admits with humility.

There are many clever moments. Early on, the quaint Warwickshire cricket match at the summer fete introduces a motif that runs through the play: a bowling motion comes to symbolise each death of a regiment member. Wonderful original composition by Sam Kenyon, performed live by an ensemble stage-left, skilfully advances the story – while the quiet notes of Stille Nacht, sent drifting over the wideness of the rivals’ chasm, are capture tender emotion. When, in no man’s land, the German Leutnant Kohler (Nick Haverson) asks Bairnsfather why he refuses to shake hands, it puts the futility of war in terms that even the youngest of audience members can comprehend. 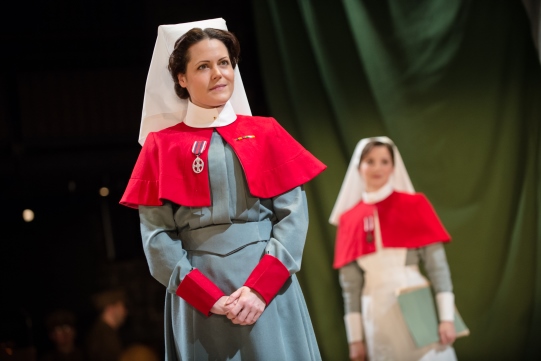 Worth special mention is the casting of Gerard Horan, who perfectly personifies the moustachioed Old Bill of Bairnsfather’s sketches with a warm and caring demeanour. Equally excellent are the girls in the Clearing Hospital – Matron (Leah Whitaker) and reserve nurse Phoebe Bishop (Frances McNamee) clash when the latter makes Christmas decorations out of bandages.

The show is delightfully funny too, in parts. Suggesting a shared game between the two sides, one Tommy soldier (loyal to his home county) suggests rugby, and then proceeds to describe in enormous detail the complicated game. “Or ve could play Football”, suggests the confused Jerry. Later, even the permanently sulky Smith – who until this point refuses to participate in the Truce – finds an opposite number to whom he can relate. Reluctantly telling the enemy his name, Smith’s morose German counterpart introduces himself in reply: “Schmidt”.

The play is not without its failings, however. Despite a programme footnote asking audiences “if the football lands near your feet, throw it back in!”, one would expect the cast to be a little more skilled this late into a run. Allowing the ball to roll into the stalls, not just once but twice, would be rather inexcusable, if it were not unreasonable to expect the cast to be fine footballers as well as dynamic dramatists and surprisingly good singers. Also sloppy: Franz (Tunji Kasim) running off down the catwalk bridges, to exit through the rear of the audience, singing “Deutschland, Deutschland über alles” – then finding himself still with some distance to cover but not knowing the rest of the German national anthem, so continuing – “laa-la laa-la la la-la laa” as he continued his exeunt.

These minor points can be overlooked, though, for the success of the rest of the play. Intelligent, poignant, and yet highly accessible, it’s a show I’m very pleased to have seen.

The Christmas Truce is in rep at the Royal Shakespeare Theatre until 31 January 2014. (rsc.org.uk)
Advertisement