Whenever there’s a big news story, everyone flocks like vultures to somehow be a part of it. Witness, in the aftermath of Mandela’s death (yes, that again…), every political leader from Cameron to Mike Sonko rushed to weave themselves into the story.

This piece is by no means any attempt of mine to do that. But hear me out. 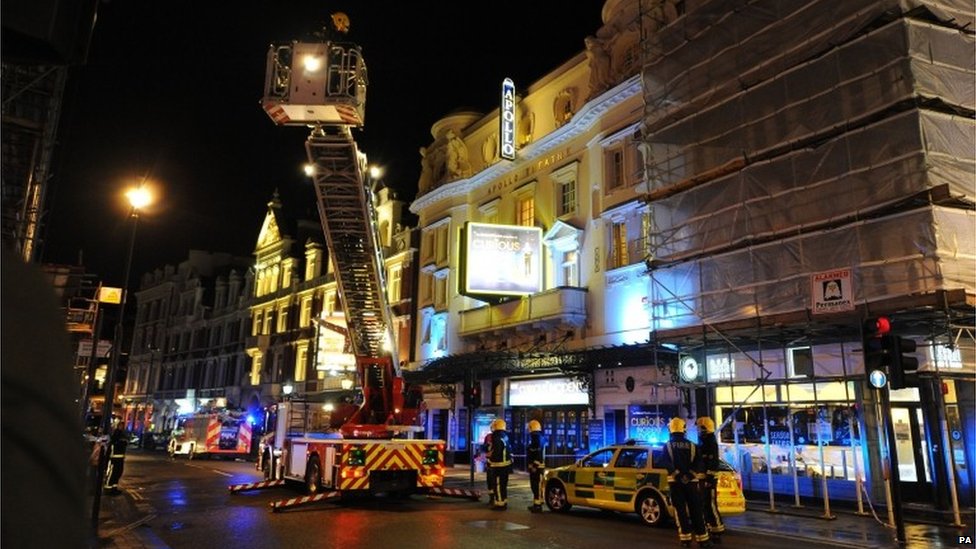 London Fire Brigade inspect the roof of the theatre from an aerial ladder platform.

Last night, I walked down Shaftesbury Avenue with my parents. We were going to the theatre. Just past the Apollo – where, only a couple of months ago, we’d watched The Curious Incident of the Dog in the Night-Time – I commented on a tucked-away fire-station that I’d never previously noticed. We kept walking until we reached the Shaftesbury Theatre, where my parents and I watched Tim Rice’s new musical. As usual, we asked for a seat upgrade, moving us from the top balcony to a slightly lower one.

It was a lovely end-of-term treat.

News is still coming through of scenes of chaos in Shaftesbury Avenue tonight. At the Apollo, during this evening’s performance of Curious Incident, an upper balcony is thought to have collapsed. Everything went black, dust flew “everywhere”, and children started to scream.

This, clearly, wasn’t in the script. Martin Bostock, speaking to BBC News, said: “I thought, ‘That’s not quite right, and then everything came down around us.'”

“We saw all the actors reacting; looking up above us and pointing, looking horrified, and then things started falling […] and I thought it was part of the show until something hit me on the head very hard.”

I can only imagine the horror – the fear – of the audience members; the not-knowing-what-to-do. I feel so desperately sorry for those people who’d gone to Town for end-of-term treats, as we ourselves had done yesterday, and I pray especially for the “four seriously-injured” who now face very different Christmases to that which they’d planned.

One miracle is that the close-proximity of the fire-station meant rescue workers were able to get to the scene within minutes of their attention being raised.

I’ll tell you what, though. When you start thinking how a few simple switches of circumstance could have put me in those seats for that show, it makes you think.

It really makes you think.