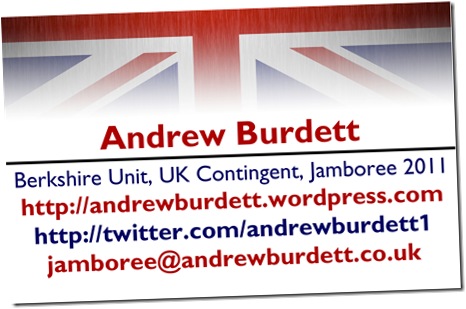 The day is here, the time is nigh, our Jamboree adventure starts now. Sort of.

Momentarily, I’ll be driven to a Scout hut in Slough where – despite the overwhelming excitement – we’ll try and catch forty winks. That’s because the real start of the Jamboree for UK contingent members is tomorrow, but as our flight leaves Heathrow at 6:50am, we’re travelling together in the middle of the night.

The flight will take us from London Heathrow (LHR) to Copenhagen (CPH), arriving at 9:40am. We’ll spend a few days in Copenhagen, waiting for other UK contingent members (there simply aren’t enough flights out of the UK on any single day). Activities we’ll enjoy whilst in Copenhagen include a trip to Tivoli Gardens and a beach party with fellow UK participants.

On 27 July, we’ll transfer by coach from Copenhagen to the Jamboree site in Sweden, where the theme is ‘Simply Scouting’. There are three concepts that the Swedish organisers have built into the design of the experience. These are ‘Meetings and Gatherings’, encouraging meetings between participants from different cultures, religions, countries, and contingents; ‘Nature’, giving food-for-thought about our impact on the environment; and ‘Solidarity’, promoting the unity of Scouts from around the world, helping us see we share a common responsibility to our world and to each other.

The Jamboree site will be made up of four main ‘towns’, named after the seasons of the year. We are in the Winter Town, and within that are a number of sub-camps. Our sub-camp is called ‘Polcirkeln’, and will also have Scouts in it from Austria, Belgium, Brazil, Finland, France, Germany, Iceland, Ireland, Italy, Japan, Luxembourg, Mexico, the Netherlands, Norway, Poland, Korea, South Africa, Spain, Sweden, Switzerland, and the USA. Fortunately, all attendants speak either French or English, or both, so adhering to the organisers’ plea of conversing with each other won’t be quite as hard as one may at first imagine.

During our time at the Jamboree, we’ll enjoy a ‘camp-in-camp’ or ‘hike-in-camp’, off-site with Swedish Scouts, giving us a flavour of how their Scout groups operate.

On 7 August, we’ll transfer by coach to Stockholm, where we will catch the overnight ferry to Turku port in Finland. We’ll depart at 7:30pm, and arrive at 7:00am on 8 August. Once in Finland, the Berkshire Unit will split up and stay with families in that country. I’ll be with my Assistant Patrol Leader Alec Banner, who I get on well with, with the Juhanoja family. I managed to email them before I came, and they sent me the below picture of them. 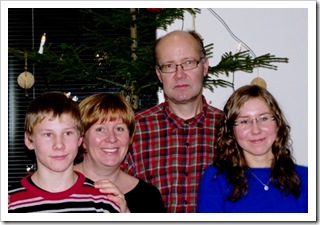 On 11 August, we transfer to Helsinki for the flight home, leaving at 5:55pm and arriving at 7:00pm. As our Jamboree adventure comes to an end, they’ll be an awful lot of washing to do – and, in my case specifically, an awful lot of video-editing to do, plus the writing of the mother of all blogs!

A Note on the Upkeep of My Web Presence

This year’s Jamboree (like the Royal Wedding) has been dubbed "the first interactive one", and the organisers have even made an iPhone app. There’s three webcams, a Facebook page, and a Twitter hashtag #jamboree. The Jamboree site has Free Wi-Fi access in all the ‘Town Squares’, but despite this, I may not be able to maintain a high-profile web-presence whilst I’m there. That’s because we’re not sure what power facilities will be available, so whilst I may have an iPod Touch and my phone, I won’t be able to use it to connect if I can’t charge the batteries. The popular feature-blog Photo of the Week, may not be updated for the next few weeks, but then again, it may. I just don’t know.

We’ll see how we go… I’m sure I’ll make at least one or two posts or Tweets (@andrewburdett1), but there’ll definitely be a full report on my return.