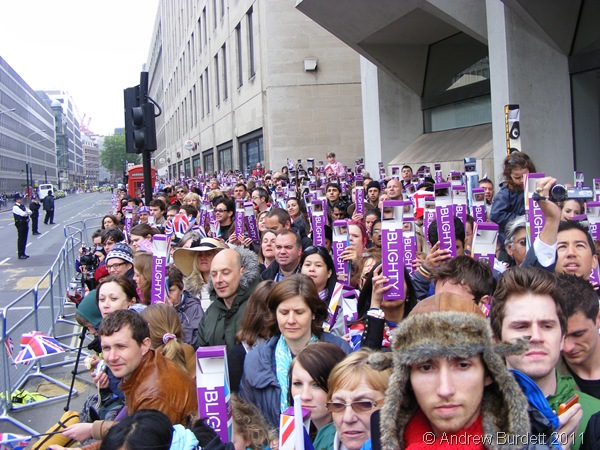 After last Sunday’s Easter special, this week sees a Royal Wedding picture in the spotlight!

Rather than showing the happy couple, this photo – like almost all of my pictures from that day – shows the atmosphere: people holding cameras up, leaning out over barriers, and watching through periscopes supplied by British TV channel Blighty. I like how you can see the eyes of the periscope-users in the mirror, like the eyes of the world looking out to Westminster Abbey. I also like the contrast of the densely-populated footpath, and the sparsely-populated road (a mere three police officers are in shot).

Most of the people in this photo won’t have seen a thing that day (unless they watched the highlights when they got home, of course). But, like everyone else, they were part of the atmosphere. They were part of the “estimated one million well-wishers gathered in London for the wedding”. Their children/grandchildren will be told of the day they watched “the King and Queen marry” – however long it takes for that day to come.

You can read my account of the day (and night before) in a blog I wrote on Friday evening or watch my experiences in this YouTube video. There’s also a post from this afternoon, as I look back over three Royal Wedding-themed UK political cartoons.