Anyone who knows me knows I’m a Scout, and if you’ve been following my Twitter feed (either on the right hand side of this blog, on www.andrewburdett.co.uk, or @andrewburdett1) you’ll know briefly what I got up to today.

For many years now, the Scouts in the Maidenhead District – along with other ‘districts’ up and down the country – have celebrated England’s Patron Saint with a St George’s Day Parade. 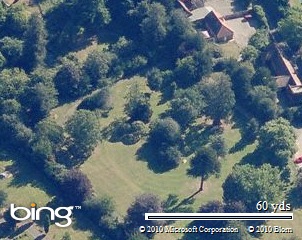 A Bird’s Eye View of our venue, provided by Bing Mapping

In the past, this has always been a walk from the Town Hall car park to the Leisure Centre where a service/show has been laid on. This year however, things were slightly different! While we all congregated as usual at the Town Hall car park at 2:00pm, we then walked to Braywick Park down a back alley. This involved passing the Maidenhead Sewage Works, much to the disgust of many of the younger Beavers, Cubs, and even some of the Scouts!

When we finally arrived at our venue for the afternoon, as shown on the left in an embedded Bing Map, the elder Scouts had to become part of a Chinese Dragon, which was made up of multiple bed sheets, painted by the younger units to have scales and the like.

It proceeded to make its way around the immediate vicinity for a while, before it was finally defeated by St George, and the Scouts went back to their respective groups.

It was then time to do a very Scouting thing; renewing the promises. When you join Scouts, you have to make a promise effectively saying you’re going to be nice to everyone, especially God and the Queen. Annually, though, this promise is meant to be renewed, so this took place in the remaining time.

But by 3:30pm, almost everything was complete, so while the rest of my troop walked to the nearby Pub Car Park for collection by parents, I walked back to town, where I had parked my bike.

I enjoyed a leisurely Sunday Afternoon in town, and after buying a McFlurry from McDonalds, I felt entitled to use their ‘Cloud’ Wi-Fi, before heading home for Roast Beef and Yorkshire Puddings, lovingly cooked by Dad as ever, for our weekly Sunday Roast!