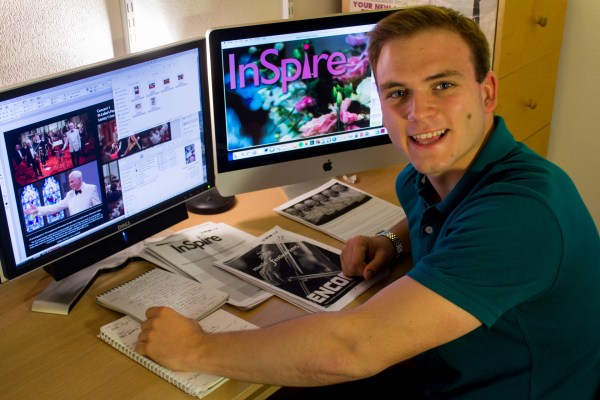 Andrew Burdett left InSpire after five years as its editor. Here, he is seen putting the finishing touches to his thirteenth (and final) edition.
[PHOTO: © Andrew Burdett 2015 | REF: LRxprt-IMG_3368_ARB]

Gaining experience in journalism, magazine photography, and page layout, I transformed the parish magazine of St Luke’s Church, Maidenhead, and in the process grew its readership two-fold.

After taking over the Editorship in 2010, I produced thirteen issues, with a total of 332 pages. To keep costs down on what were relatively low volumes, the paper editions were printed on the church office’s own full-colour digital photocopier. Online, the digital editions amassed quite a following, even among those not at all connected with the church.

The early editions were compiled on Apple Pages, but for the Autumn 2013 edition onwards I moved to Adobe InDesign. In response to reader feedback, I put an emphasis on the pictorial content, and made sure to capture high-quality images at many church events.

I was pleased to receive compliments from, among others, the then-Bishop of Oxford who described InSpire as “one of the finest magazines in the Diocese… and probably, too, one of the best in the country”.