Familiar, now, is my annual urge for reflection. Equally familiar, to those who know me and love me, is my annual episode of rattiness and defeatism.

“Right, that’s it,” I told my long-suffering wife on Monday: “I can’t be bothered. The script’s dreadful, there’s no decent music… and I still haven’t even filmed anything yet.”

Bearing in mind it was now 3pm, on New Year’s Eve eve, this was rather a problem. We had precious little daylight to get something ‘in the can’ before the year was out; sunset was in an hour, and I hadn’t even chosen a location where we would shoot my links. 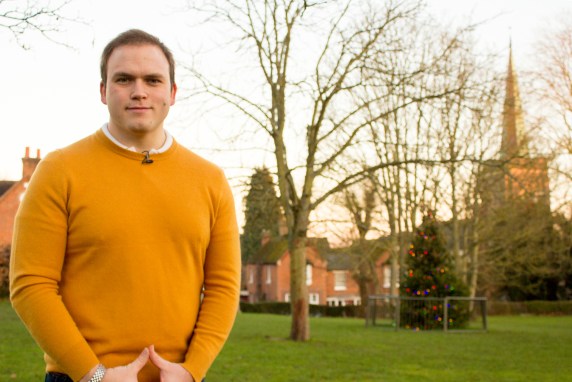 Andrew Burdett returned to Taplow Village Green for this year’s REVIEW video; St Nicolas’ Church behind him was the setting of his wedding in April.

Taplow (where we got married in April) therefore became our obvious setting, by absence of any more creative ideas and indeed through a complete lack of time. Happily the choice seemed to work — the last shot was gathered beneath a glorious wintery-orange sky, which my battered DSLR did its humble best to capture.

Working through my own material, from the course of the year, took long enough: stored across a range of devices, the first challenge was simply to get everything in order. Only then could the long edit begin – all set to Something Unreal by The Script.

There were three key events that were critical to highlight: the wedding, the new baby (not mine), and the new job. I hope I’ve done them all justice.

Oddly it is the last of these, rather than the first, that feels like this year’s biggest pivot-point. Getting married actually changed very little in mine and Kristen’s relationship, as we went straight back to living 200 miles apart, immediately after our honeymoon. It was the new post at ITN that gave me the chance to return south — and for the two of us to begin some kind of ‘conventional’ marriage.

That, though, meant leaving dear colleagues – and a job I loved – in Leeds. I hope I have shown them, and the good ship Calendar, just how fondly I shall forever treasure that (as it now turns out, short) period of my life.

In the days leading up to New Year’s Eve, there was a little flurry of ’10 Year Challenge’ posts on social media. The idea was to show the passage of time on the faces of friends, by sharing pictures taken a decade apart. It was something I’d been considering anyway, for the opening sequence. To vary the theme, I decided to show photographs from our, rather formulaic, family Christmas meal. This seemed an appropriate way to lightly acknowledge the end of the decade without dwelling too much on pre-2019 material. I’d anticipated the pictures charting the gentle addition of girlfriends and boyfriends, for me and my siblings. This wasn’t quite as effective as I’d hoped – but does include my grandfather at our 2009 Christmas lunch – rather poignant, as he didn’t quite make it to the 2010 repeat.

One final note on tone, which again proved a continual source of worry. How much do I temper my enthusiasm for a (personally fantastic) year, to reflect the pain and anguish that others may have felt? For those whose cards have been dealt less generously, how might a buoyant broadcast declaring optimism and hope land? Thankfully a reflective Facebook post, by a friend who was recently widowed at far too young an age, appeared to reach much the same conclusion as I do in the video. Namely: let’s embrace whatever ‘new normal’ we find for ourselves; crossing fingers for a happier new year, and brighter decade ahead.

As ever, huge thanks to those who’ve patiently pondered: ‘When’s the video coming out?’. (Drew Kendell, Ben Perkins, Jay Brickell, Gemma Murphy, and the ever-loyal Josh Kaplan, among others.) The support has really helped to get it across the line. It’s four days later than planned, but still way ahead of my embarrassingly delayed 2017 effort.

I hope this lives up to the expectations of the cult following, which these films have inexplicably acquired.