“Seek out togetherness, friendship, and love”: the closing words from my latest yearly REVIEW film.

It gave an air of optimism on which to end, following a year which, nationally, had felt particularly dour. “The news never gets any better,” I commented, “so you must instead make your own good news to share.” By this, I meant not the ‘fake news’ that litters Facebook timelines, or magazine gossip derived from baseless tittle-tattle. I meant the ‘news’ of our lives — the information that takes us from one day to the next, and through which we share life’s great journey.

So here’s my own ‘good news to share’: I’m engaged! 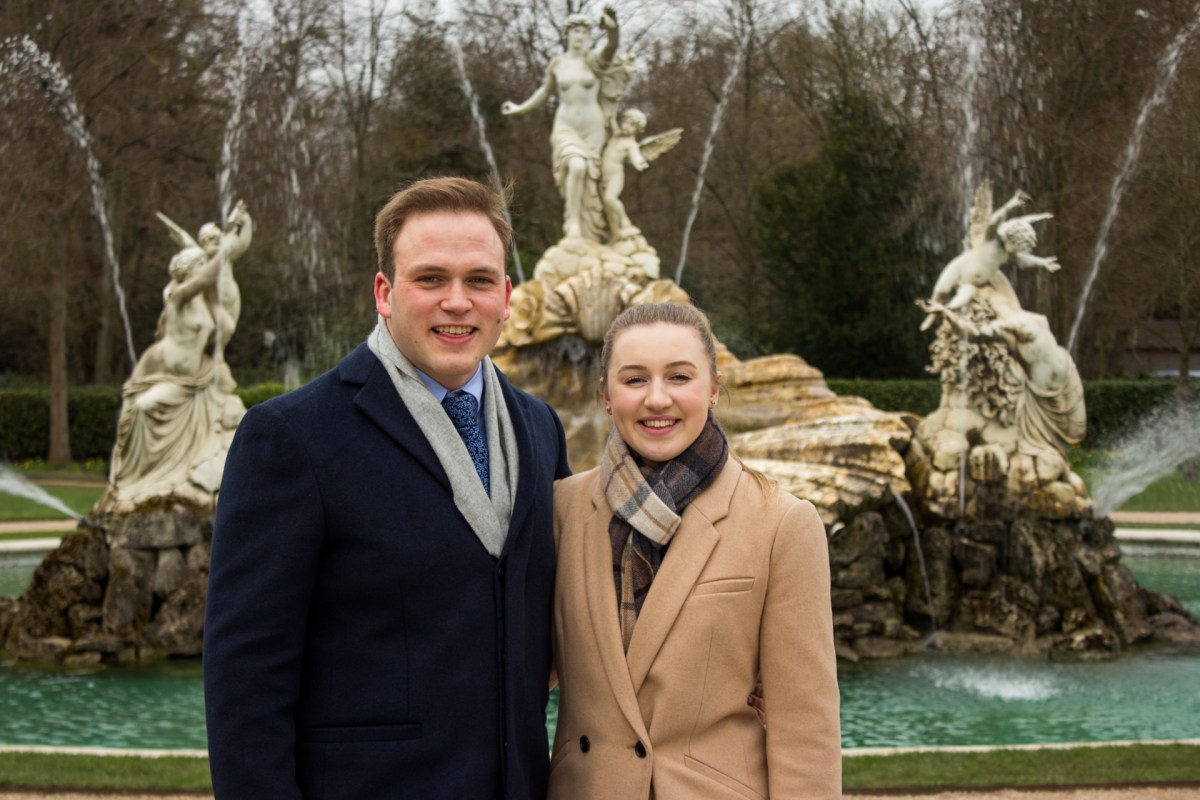 Andrew and Kristen in front of the Fountain of Love at Cliveden.

Kristen, my dearly beloved, said “yes” when I proposed at Cliveden on Easter Day. It was a joyous afternoon, surrounded by our families in a place we both love – and all the more delightful for the fact it came as a total surprise to her. 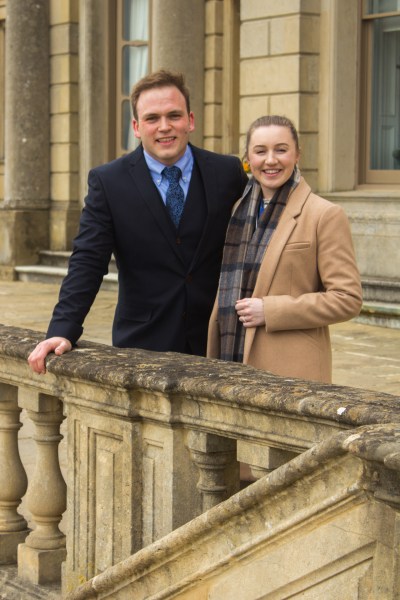 Andrew and Kristen at Cliveden immediately after the engagement.

I know some readers will want ‘the full story’… so here, for them, and for prosperity, is how I did it.

We had, of course, talked a lot about ‘us’ in the three years we’d known each other. In that time, and especially over these last twelve months, it became ever more apparent that marriage was somewhere on the horizon. We spoke at first in vague terms, but then with rather more certainty, of the hymns we would choose and the outfits we’d wear. In the run-up to my brother’s own wedding last December, we discussed his and his wife’s latest plans, secretly making notes of their best ideas which we could steal, when our own time came!

Over Christmas, I was pleased to accept invitations to the full array of Kristen’s family traditions, and was genuinely touched by how welcome I’d been made to feel. Likewise, Kristen slipped frictionlessly into everything: from making teas at our Christmas Lights open-house weekend, to entertaining my relatives over theNew Year. Life is blissfully easy, I realise, when a relationship has the full backing and support of the whole family.

And so, full of confidence in what they would say anyway, I went around to Marlow, one night in February, to formally seek her parents’ blessing. Being an ‘equal opportunities’ kind of chap, it was important that Kristen’s mum was there as well as her dad. Having said my piece, Andrea instantly responded with “yes”, stealing Graeme’s one opportunity to make me sweat through faux hesitation. “Hey,” he said, turning to his wife, “it’s my bit… it’s my job to respond!”. Needless to say, he gave his approval too, remarking that I complemented his “very special” daughter. I concurred with that fine description of my darling girl, and then disappeared quickly lest Kristen return to see my car on the driveway.

Simply organising this secret meet-up with Kristen’s parents had proved exceptionally tricky. Since she lives at home (only commuting in to Oxford on days when she has classes), opportunities to find her parents alone are exceptionally rare. My good fortune – perhaps through an act of divine intervention – was that Kristen had a university choir practice on the night I’d had a job interview in London. Initially she’d offered to skip the rehearsal, as that way I’d get to see her before I went back to Sheffield the following morning. “No no, dear,” I replied, with apparent selflessness: “You go to your choir practice; I’ll just have to wait and see you next time.” It bought me a precious half-hour in her absence — just enough time to nip around, still in my best suit from earlier in the day. 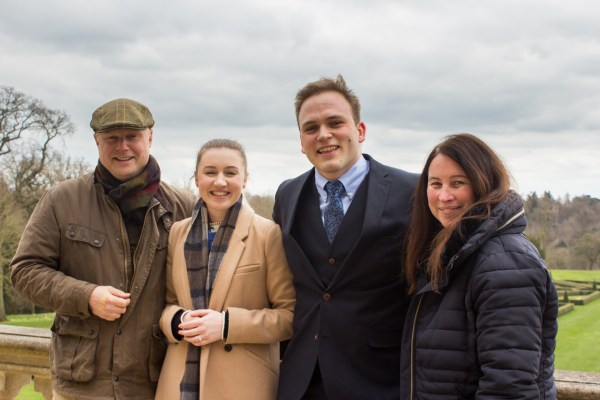 Andrea and Graeme did an extraordinary job of keeping schtum in the five weeks between then and now. One amusing quirk was how they had been forced to feign fresh interest in Kristen’s retelling of my job interview debrief, despite having already been told (by me, in person!) just a few hours earlier.

Meanwhile, back in South Yorkshire, I was endlessly dreaming, scheming, and planning how I would propose. Whilst pounding the lanes during my daily swims, I devoted a lot of thought to what words I would say. The ring had been ordered and my five housemates (all girls) imbued increasing excitement as the time neared.

My initial intention had been to propose on Palm Sunday, but Kristen was then assigned a nursing shift for that date, which forced me to rethink and reschedule. I can’t say I wasn’t disappointed. More than anything, what crushed me was the gloomy forecast for the following week’s weather: rain every day. And not just light showers. We’re talking the full three-raindrop-and-big-black-cloud icon. Every. Single. Day.

Kristen, who is usually so sympathetic to my woes, couldn’t understand my paddy over one missed sunny day. I could hardly tell her: ‘Well actually darling, it’s because I was going to propose…’ So I had to let it pass.

On Wednesday we went for lunch along the same stretch of the Thames where we’d strolled on our first date, and the heavy rain (briefly) lulled. But with Kristen’s parents on holiday in Devon, it wouldn’t be fair to propose, as they would be left to learn the news down a glitchy phone-line. Instead, I wanted them to be much, much closer to the action. 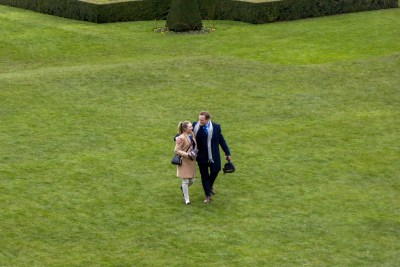 Joyfully walking back to the watching families.

Easter Day, then, was set as ‘the date’. It turned out to be a far more emotionally charged day than I’d envisaged. Soon after returning from the 6am dawn service, I learnt the news of the death of a dear congregation member and friend. Announced to all before the 10am Eucharist, it is not difficult to consider the added poignancy of Thine be the glory, with its closing words “Thou o’er death hast won”. I could only laugh when the organ piped up with Charles-Marie Widor’s magnificent Toccata; the self same joyous voluntary that ended each of my respective grandparents’ funerals.

Once home, and with lunch cooking, Mother’s famous Easter Egg Hunt set a brighter mood for the rest of the day. This year seemed far harder than previous years, in part because new eggs continued to be hidden, even after we’d begun. Thus it was not good enough to work systematically through the flowerbeds; the elusive golden egg might well have since been replaced in previously-searched areas. As a result, we sat down for our meal half an hour late, delaying my timings with Team Paskins. 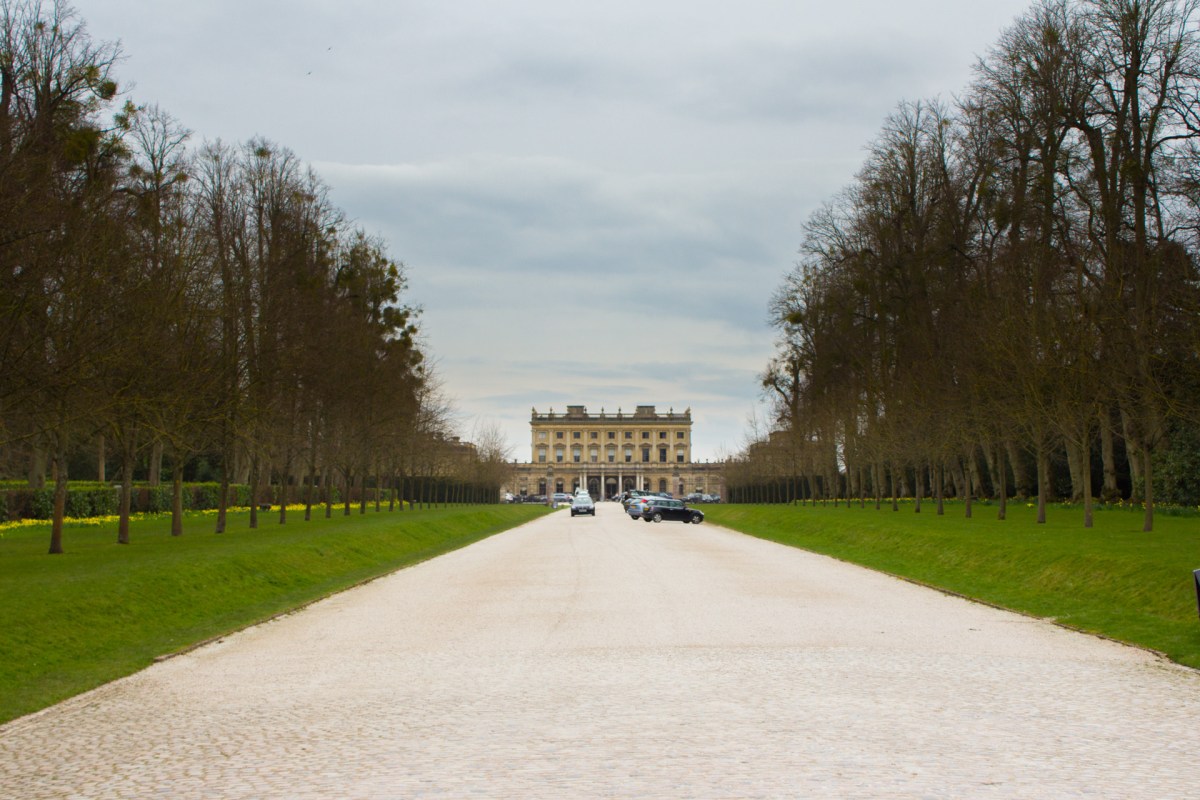 My plan was for Kristen’s parents to secretly meet mine at Cliveden, ready to celebrate with us immediately after our news. Over in Marlow, Andrea was secretly fielding my texts, giving sitreps on the latest from Burdett Towers. Initially forgiving of the hold-up, I could sense her concern as Cliveden’s 4pm closing time loomed – with us remaining still stuck in Maidenhead. 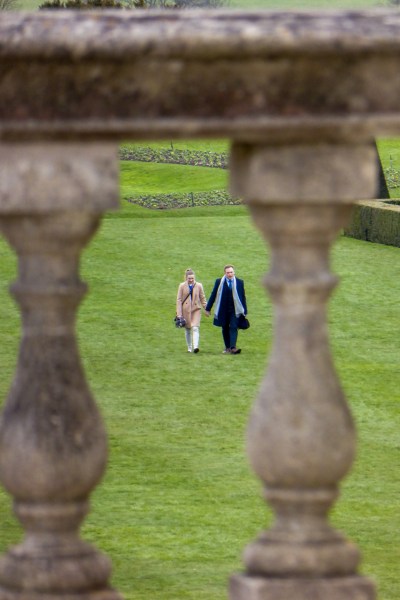 Spotted walking in Cliveden together.

Then, at 3:09pm, the clanger: “Help! Matthew’s going through his whole wedding album!”. This was a real nightmare! My carefully-laid plans were about to be derailed by my brother and sister-in-law’s (perfectly understandable) desire to share the recently printed pictures of their own big day. They didn’t know the hurry I was in! I tried to race them through the pages, only to have my hand slapped away for turning too quickly.

I needed to think quickly. In the end I gave an excuse, and quickly loaded the car. Kristen politely made her goodbyes, and we sped over to Cliveden.

Hot on our tail were my parents, with my sister Harriet and Matthew & Clare given scant details to entice them out too. Whilst strolling with my beloved, I was slyly coordinating Kristen’s parents to meet my family. (I can’t have looked like I was showing much interest in poor Kristen, constantly texting away!)

A walk down the riverside steps prompted Kristen to look out across the still water, declaring: “This would be a lovely spot to propose.” Either she was subconsciously detecting something in my manner, or so far removed from that possibility that she had genuinely no idea that my proposal was so imminent.

We walked back up the steps and made our way onto the Long Garden, the family now scattered across the parterre to avoid drawing her attention.

And it was there, on that luscious lawn, that I got down on one knee.

“Kristen, will you marry me?”, I asked, opening the ring box which had, until then, been slickly concealed in my camera bag. 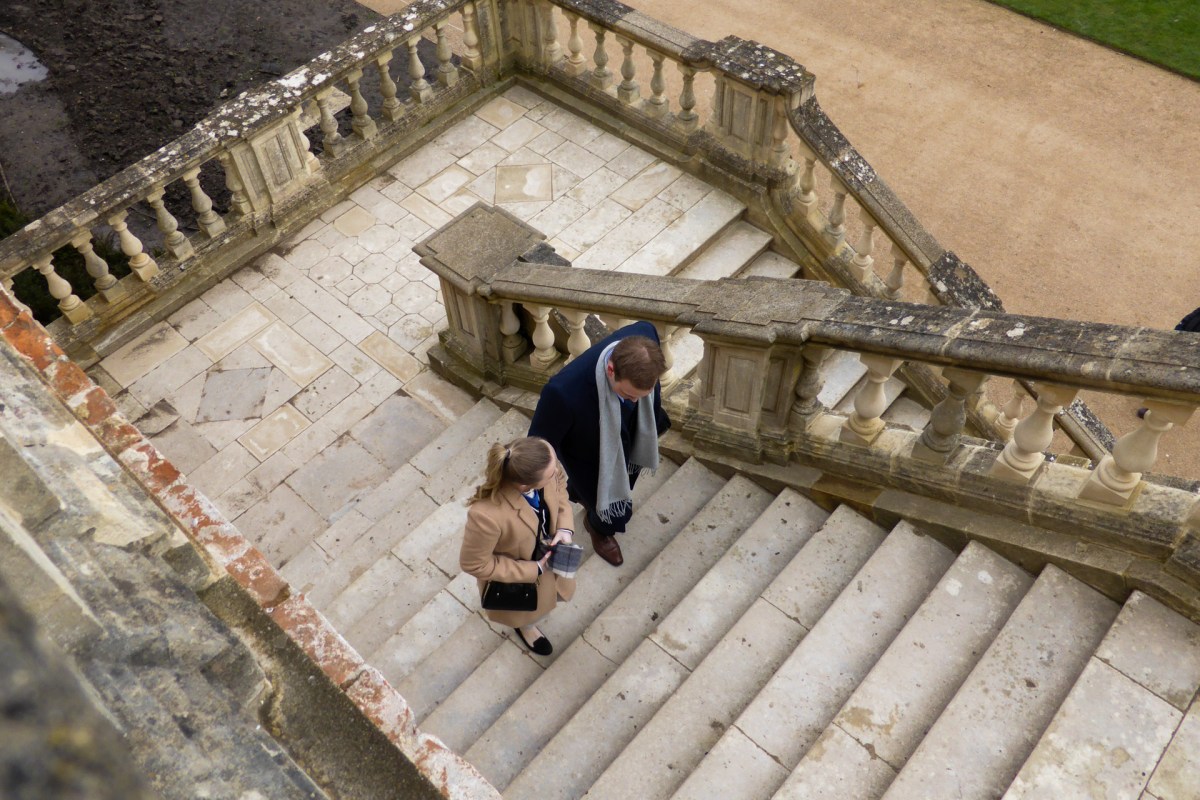 Heading up the parterre steps to the onlooking families. 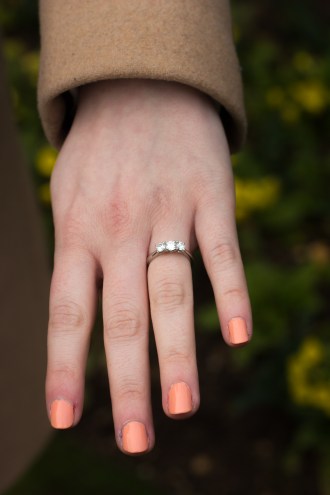 Three diamonds are set on a platinum band.

Cheers and whoops erupted up on the patio, and I gestured to our onlooking families. I’m not sure what came as more of a surprise to Kristen: the proposal itself, or the fact I’d orchestrated the whole thing without arousing her suspicions.

We walked up the steps and smiled for photographs, before I said: “Well now we must celebrate in the only way we know how, with tea in the Orangery!”

Given the slim pickings remaining on the cakes counter, it came as no surprise that Father had prepared a tupperware lunchbox with baking from home. His Simnel cake was the best I’ve ever had, and we all enjoyed chatting over tea. 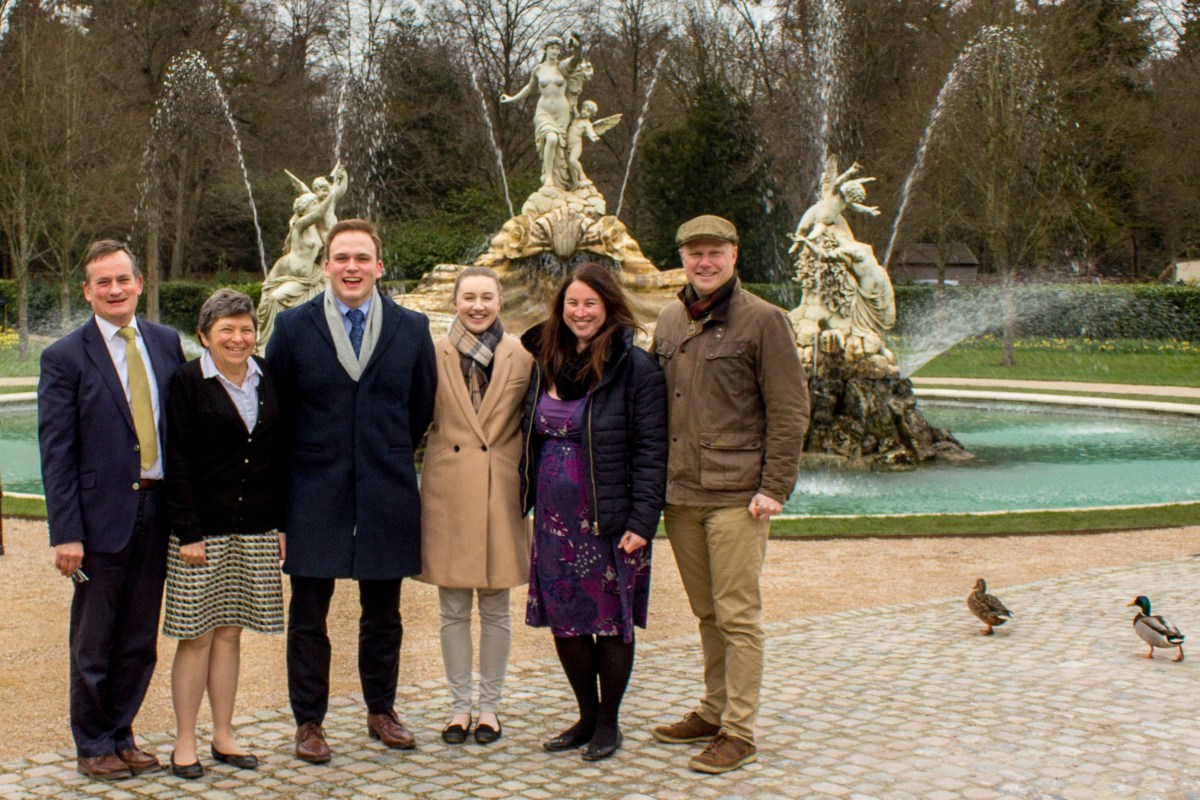 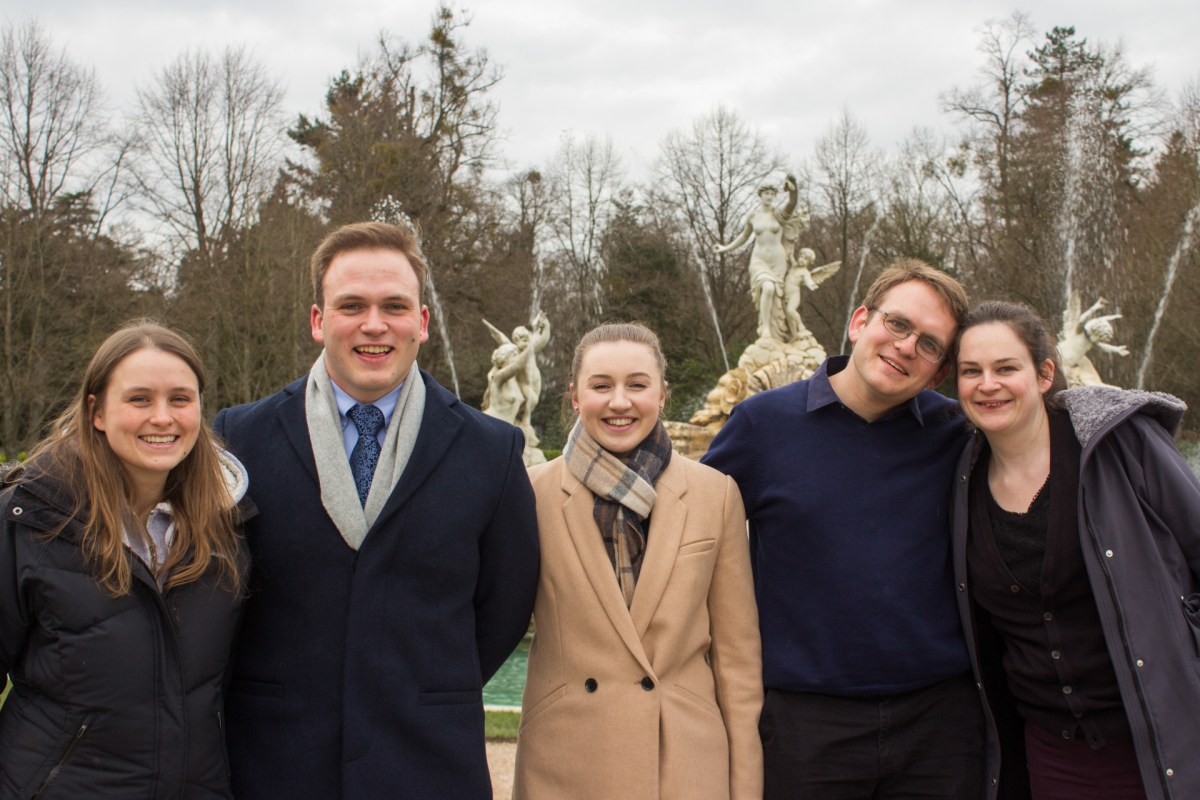 For everyone else this wrapped up the day, but for Kristen and me it was just the start. We toured her grandparents’ houses and visited Gillian Dibden, the conductor in whose choirs we had met. Such joy, and thrill, and unbridled happiness, wherever we went.

We are both relishing the prospect of a lifetime spent together. 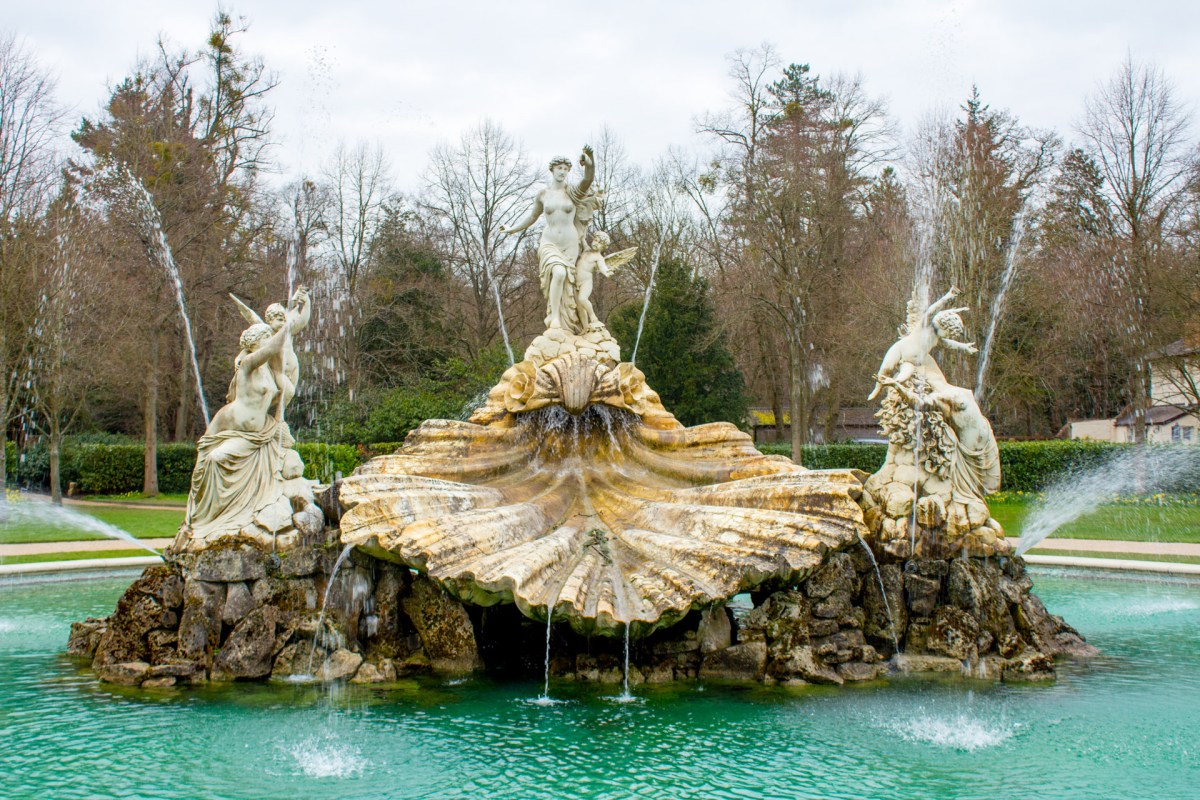 The famous Fountain of Love, at the bottom of the Cliveden driveway, was the perfect setting to end our day.

We are both so happy to announce we’re engaged. 💍 . . . (Full story on my blog, if you really want it; link in bio.) #engagement