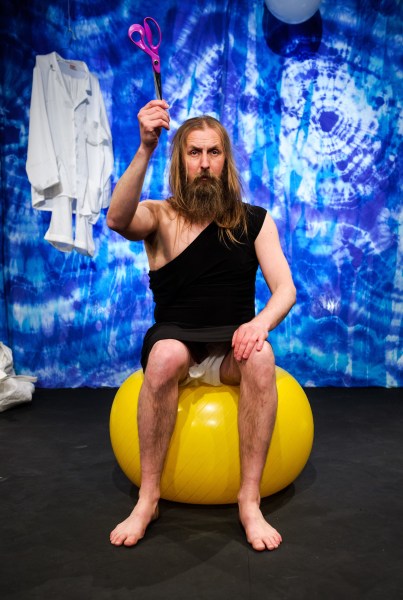 At one point in the show, Jamie Wood invites the audience to cut off parts of his clothing.
[PHOTO: © Alex Brenner]

Written and performed by Jamie Wood

I went home from O No!, Jamie Wood’s charming yet utterly surreal show, wondering whether it had all really happened.

Indeed, when I then described it to m’Lady, she was convinced I was making it up.

“He started by passing this orange orb around the audience”, I explained. “And then he invited us to cut away pieces of his dress. And then he turned all the lights off, and invited us to touch one other.”

I tried hard to assure Kristen that there was nothing inappropriate about it — it was all just, well… rather lovely. Slowly, I began to persuade her of the gentle bohemian spirit of the show. I was winning her round.

“Oh,” I added, “and then he asked for a volunteer to get naked with him in a bag.”

The one-man show debuted at the Edinburgh Fringe in 2015, and received generally very positive reviews. It’s Fringe gold: a little awkward at first, perhaps, and zany throughout, for sure, but rather delightful in its own way. 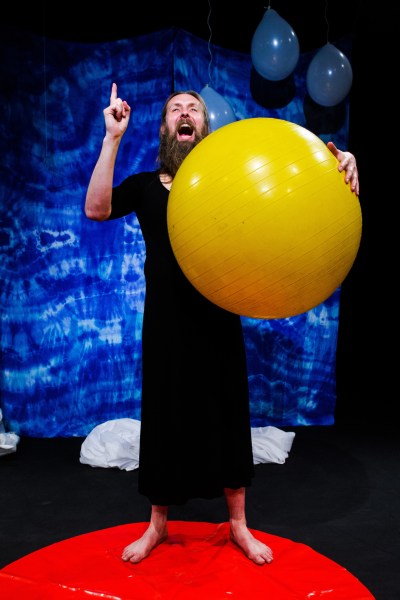 At one point in the show, the performer presents the crowd with his yellow sun.
[PHOTO: © Alex Brenner]

Whatever your thoughts on avant-gardism (no, it’s not normally my cup of tea either), it’s hard not to warm to Wood.

After launching his giant yellow ‘sun’ into the crowd, he traces colours and patterns from audience member to audience member, like a psychedelic astronomer drawing consolations in a night’s sky. It’s this that is the real ice-breaker.

When Wood sees a man, sat just behind me, with neatly-trimmed facial hair, he senses a connection and asks if he can touch it. A moment’s pause from the gentleman, aged about 65, but then a reluctant yes.

Wood clambers over the tiered seating and then proceeds: not by grabbing it with his hands, but instead by brushing his own, rather dishevelled, beard up against the nonplussed chap’s. The man smiles and the ripple of laughter turns from embarrassment to enrapture.

When you strip it back, Wood’s performance is just clownery. I say “just”, but to build up that rapport makes the clown one of the hardest roles in entertainment. Beneath the calm, hippyish persona, Wood works hard to keep his audience guessing ‘What’s he going to do next?’. We never work it out.

The whole show bounces along, with various references to the woman from whom the show takes its name (Yoko Ono / O No!… geddit?). It’s not all fun and frivolity – the recurring motif of gunshots is a reminder of Lennon’s tragic end – but on the whole, O No! is a triumph of abstract trance.