Your first day at university is a strange affair.

Dreams of endless parties, heady nights, and parent-free living seem only hours away from being realised. But such thoughts are brought back down to Earth by the long list of drab domestic tasks that need completing first.

Carrying in the abundance of stuff from your dad’s car; making up a bed for, likely, the first time in your life; and setting up your devices on the always terrible Eduroam Wi-Fi. All are difficult yet essential parts of Day One.

But first and foremost of all is, surely, the fridge-shelf landgrab.

Unlike most mistakes commonly made in freshers’ first terms, there is no second chance to get it right. Resits will take care of disappointing exam results, and reading week will enable you to catch-up on all the work you should have been doing before you discovered Corp Wednesdays.

But at no point will you get the opportunity to correct your bad choice of refrigerated storage. You’re stuck with it for the year.

Think wisely, then, and assess the options before committing. If you go for the farthest fridge, you’ll forever begrudge the miles of extra footsteps accumulated across the year. But pick the fridge too close to the kettle and you’ll lose litres of milk over the next nine months.

It’s a tough call, unless you’re fortunate enough to have three fridges. In this case, obviously, you should follow Gautuma Buddha’s teachings and opt for The Middle Fridge.

With this sorted, bagging the highest shelf is usually the top prize. Doing so avoids the risk of one day finding your packet of bacon covered in the remnants of your flatmate’s spilt jar of pesto. 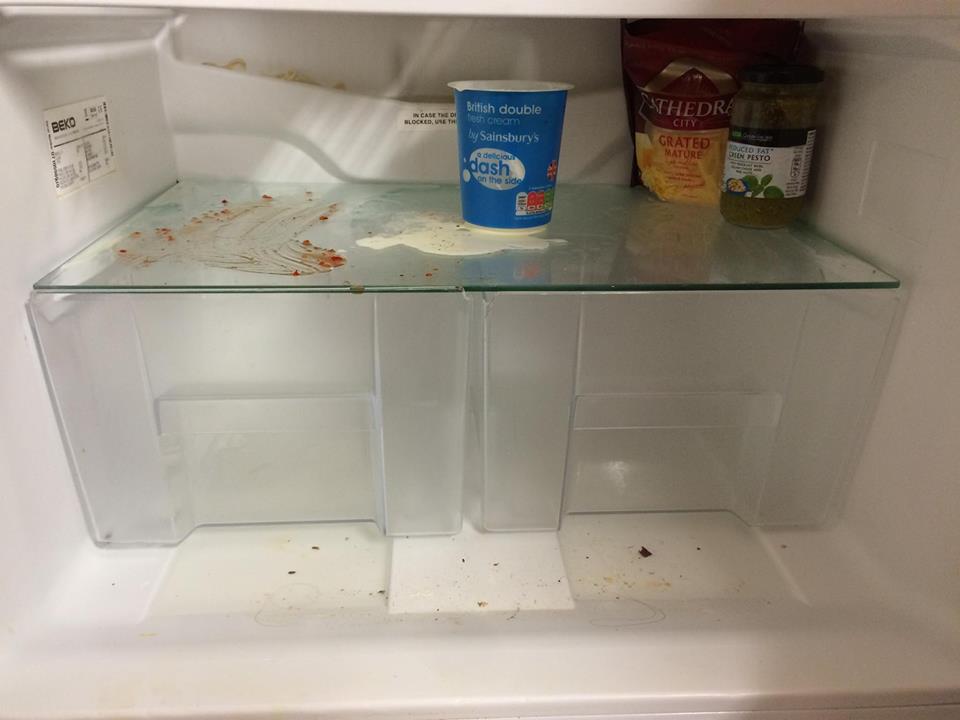 The higher, the better – avoid the salad drawers at all costs.
[PHOTO: The Tab]

Pity those on whom Darwin has not shone, and therefore have no choice but to take a lower shelf. Your shortest flatmate is automatically resigned to a year of pesto and bacon pasta – but, as a bonus, will discover other new and exciting flavour combinations. Orange-juice yoghurt, anyone?

Woe betide the fool that consciously picks the salad drawers in the bottom. The glass layer above them is no protection for the leaking fluids that, like rivers to the estuary, will always find a way of dribbling down the back and filling the bottom of those Perspex trays. 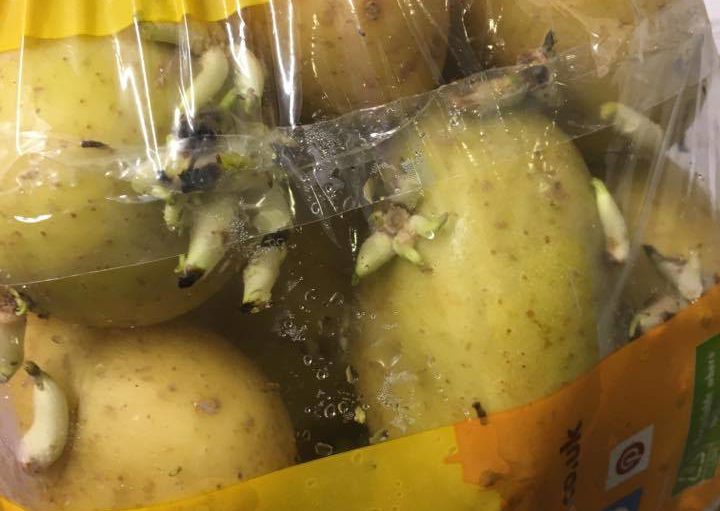 When your spuds have more eyes than Gallaxhar, it’s time to throw them away.
[PHOTO: Andrew Burdett 2016]

If the gap between shelves leaves you with little space for your mountains of fresh food, a little cunning should help. There’s normally more shelf-hooks than shelves, so simply rearrange the others below; thus compressing your flatmates’ fridge capacity down, but doubling the proportions of your own pantry.

Do this before your new friends have even thought about their first food-shop, and you’re a step ahead for the year.

In the 1970s the then-Education Secretary Margaret Thatcher scrapped the national provision of milk, provided freely to schoolchildren since 1946.

In the process, she earned herself the nickname ‘Milk-Snatcher’, a moniker she struggled to shake off for the remainder of her parliamentary career. Even at her funeral forty years later, protestors – still bitter about their ‘thieved’ supply of calcium supplements – waved milk bottles at the passing hearse; a last, aggrieved jeer at the woman they had resented for so long. 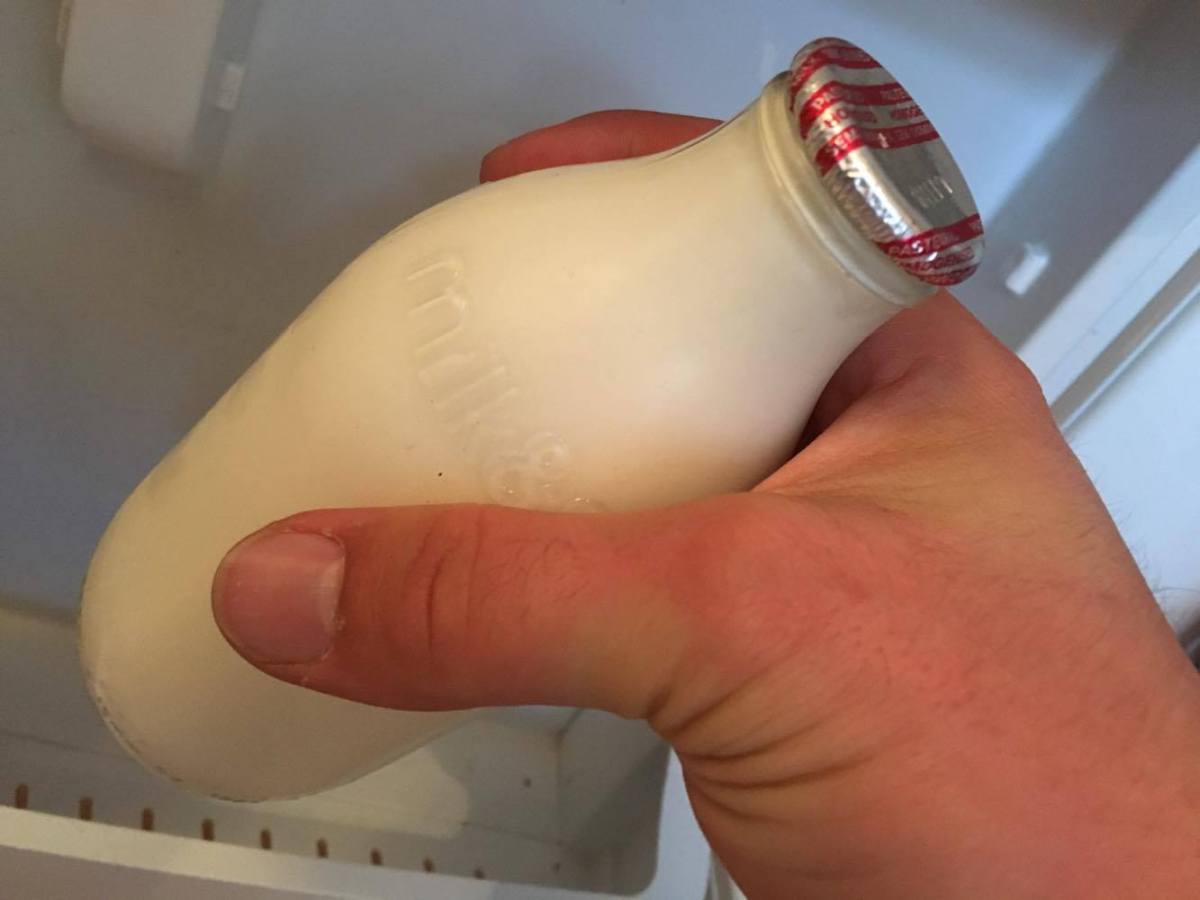 In this city in particular, Thatcher fans are few and far between. Fresh young southerners are therefore advised to avoid anything that could draw unfortunate comparisons. Keeping your hands off your flatmates’ bottle of semi-skimmed – even just the drop needed for a one-off mug of tea – is critical.

The kitchen speaks of the cook

However witty and charming you pretend to be in those awkward first-day chats, a truer, fuller picture of you will naturally emerge every time your flatmates go to the kitchen. A sure-fire way to invoke envy is to fill your fridge shelves with appetising food, when your flatmates have nothing.
[PHOTO: Andrew Burdett 2016]

This extends to the food itself. It’s hard to resist looking down on those who tolerate PG Tips with red-cap milk; those who think mild cheddar of Number One strength is sufficiently flavoursome.

But the jealousy is crushing when your posh flatmate from St Alban’s returns from a weekend at home with a hamper of homemade produce. You look back up to your shelf. Yep. All you’ve got left is that half-empty tin of baked beans – not even a slice of bread for toast.

Be a stalwart, not a warrior 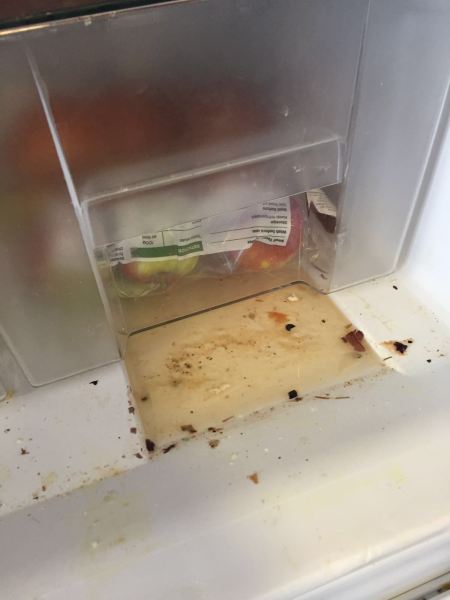 Try to sort things out before things get this bad.
[PHOTO: The Tab]

A word to the wise: like communal living areas, it’s a good idea to keep your fridge clean and tidy.

If your flatmate’s food is starting to smell, it’s going to stink out your whole fridge within hours. Isolate the offending item and, if necessary, dispose of it.

If no one takes responsibility for an unexplained spillage in the refrigerated village, don’t leave it to fester on principle. Get a cloth and sort it out.

And if Rachel’s gone home for Christmas, it’s fair game to bin her already-mouldy cream cheese without ringing her up to check first.

But don’t take such advice to the extremes. Just because something on the shelf below has passed its sell-by date doesn’t give you the right to chuck it out. Get real: your uni fridge is never going to smell of roses.

Be civil and never – repeat: NEVER – leave a passive-aggressive Post-It stuck to the fridge door.

A version of this article was originally written for The Tab.