Writing from university in Sheffield, Andrew Burdett describes an evening with Nadia Bolz-Weber.

This evening, my church here in Sheffield (St Mark’s, in the Broomhill district) hosted an evening with Nadia Bolz-Weber. She’s an American lady: a Lutheran pastor, middle-aged, two children… and nothing like you’d imagine.

Heavily-tattooed, muscular, and six-feet tall, she says she felt her calling in 2004, whilst giving the eulogy for a friend who’d committed suicide. Herself still in recovery for a drink and drug addition, she realised her fellow addicts (none of whom had any form of religion themselves) needed a pastor; someone to ground their dysfunctional community, particularly during such testing times. “Oh s**t, I guess that person’s got to be me.” 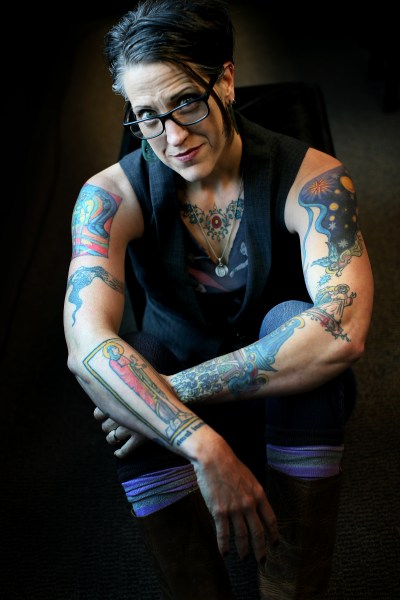 Lutheran pastor Nadia Bolz-Weber, who welcomes all at her Denver church, The House for All Sinners and Saints.
[PHOTO: Courtney Perry]

Yes, she swears, not ridiculous amounts, but certainly far more than I’m used to hearing from a dais. Her manner is disarmingly funny and instantly engaging — skills presumably honed during her stint as a stand-up comic, prior to ordination in 2008.

Straight away, she set about establishing her Denver church, calling it the House for All Sinners and Saints. The name is inherently more accepting than the more traditional likes of just ‘All Saints’, and welcomes those historically rejected by the Church. A third of her congregation is LGBTQ, though she warns against tokenistic inclusion schemes.

The House faces many of the same problems as any other church, especially in terms of its finances. Fortunately for Bolz-Weber, her PCC includes Stuart, a drag queen she calls her ‘Minister of Fabulousness’. She once asked him for ideas for their upcoming stewardship campaign, and he suggested making up a T-shirt.

There she has us again, roaring with laughter. We’d be rolling in the aisles if only there were the space. Tickets sold out within days, as word quickly spread throughout the city that this internationally-renowned preacher was coming to Sheffield.

Refreshingly, the vast majority of the audience are not regular St Mark’s congregants; her very name seems to pull people from all over. It is as if she has a sort of rock star following: not quite of full-blown Ronnie Wood standard, but perhaps more like the crowd you’d expect to find for Rick Astley’s set during Cookham’s Let’s Rock The Moor.

The evening concludes with a message of love and the communal singing of Amazing Grace. By the last verse, we were belting it from the pews — proud Christians, completely reinvigorated, all of us. I’ve never experienced a ‘sermon’ like it.

A version of this article appeared in the December 2016 edition of InSpire, the parish magazine of St Luke’s Church, Maidenhead. This post was back-dated, having been first published on 1 December 2016.