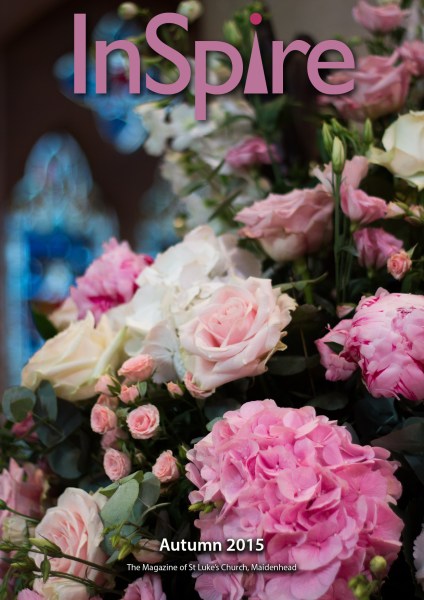 The front cover of the Autumn 2015 edition of InSpire, the St Luke’s Church magazine.

Today, in its own small and unmarked way, was for me the end of an era. Since 2010, I’ve been in charge of InSpire, the church magazine of St Luke’s, Maidenhead, and in that time I’ve produced thirteen issues, with a total of 332 pages and very nearly 125,000 words. My final edition went on sale today, and quickly sold out of the initial batch we’d printed.

As with the last issue, this Autumn 2015 edition features a floral display on the front cover — one with which I was particularly taken at an evening service in June. My friend Sally Somerville and I stood staring at it for a good few minutes before she said: “The only way I can describe it – and this doesn’t really do it justice – is as being like meringue.” I knew exactly what she meant: it was delicate, intricate, and beautiful. On the inside cover, a single line attributes it simply as being “seen at the end of the church’s Music Festival”. In fact, Joan Harnby (our flower organiser) informed me this morning that it had been put in to celebrate the golden wedding anniversary of John and Rita Salter, something marked with a mention in the From the Registers box on Page 25.

So it wasn’t, strictly, part of the Music Festival at all… but coverage of that fortnight-long series of concerts and events is not lacking elsewhere. Alongside 37 full-colour photos from the concerts themselves, there are also a couple of stories from ‘behind the scenes’. My father, Richard Burdett, recounts the sweaty afternoon we spent hiring a van, collecting the choral risers from Norden Farm, and then lugging the whole lot into church when a castor snapped off a trolley. I am also most grateful to Jean Tyrwhitt-Drake, who dropped everything when I phoned up a couple of days ago, pleading desperately for a piece on the journey she made to collect the interval wine. “Thank you so much”, I said, giving her a warm hug when I saw her today. “You know what you owe me?”, she said with a smile: “The two hours’ gardening I was going to do on Friday afternoon!”.

Yes, yet again, this issue came together only just in time for today’s publication. The write-up of the ‘In Conversation with John Rutter’ headline event had barely been started at midnight last night. There wasn’t enough space to go into anything like as much detail as I’d have liked, so I decided to publish a full version on my website, with a shorter abridgement in the printed magazine. This meant I had to write the long version first, and then shorten its 2,950 words to the 1,195 that appear in print. Eventually, When John Met John was finished at about 3:30am this morning. You can read my full account of their hour-long interview here.

Particular highlights in this latest magazine include a page about the fledgling St Luke’s Relatively Young People (SLRYP) group, an obituary to Rita Buckland in the form of Revd Sally’s funeral address, and photos from the summer fair (warning: regurgitated content alert! It’s a reworking of my earlier blogpost). There’s also a book review of John Leach’s God’s Upgrades… My Adventures, discussion of the hymn Thy Hand, O God, Has Guided, and a guide to building prayer into our everyday lives.

For the first time, I tried to build a vaguely logical order into the article layout. Beginning with ‘the God stuff’ (vicar’s column › my column › curate’s column › ordinand-in-training’s column), the magazine progresses to reports, features, and then the ‘regulars’. Right in the middle resides the aforementioned content from the Music Festival, designed as a special twelve-page souvenir pullout.

Here’s a few more thoughts I’ve had about this issue:

Now, with my move to the University of Sheffield just one week away, it’s time to say goodbye to the publication I’ve loved editing for the last half-decade. As I say on the penultimate page, in a piece entitled Last Word, taking on InSpire “I was sure would provide useful experience for my long-dreamed career in journalism”. Indeed it has — and “it’s in pursuit of that career that I now leave” for a university Journalism Studies course. I was touched when an admissions tutor at Southampton Solent University (my ‘insurance’ choice, if I’d failed to get in to Sheffield) commented on how impressive he found the magazine. “It’s absolutely brilliant”, he told me, having looked in detail at several recent issues. His words meant a lot, but the fact he’d taken such an interest in InSpire meant even more. For five years it’s been my baby — the congregation’s magazine, but very much in my care. I really am genuinely excited to see the new direction that my successors take it in.

Here it is, the latest (and my final) edition of InSpire: Autumn 2015. 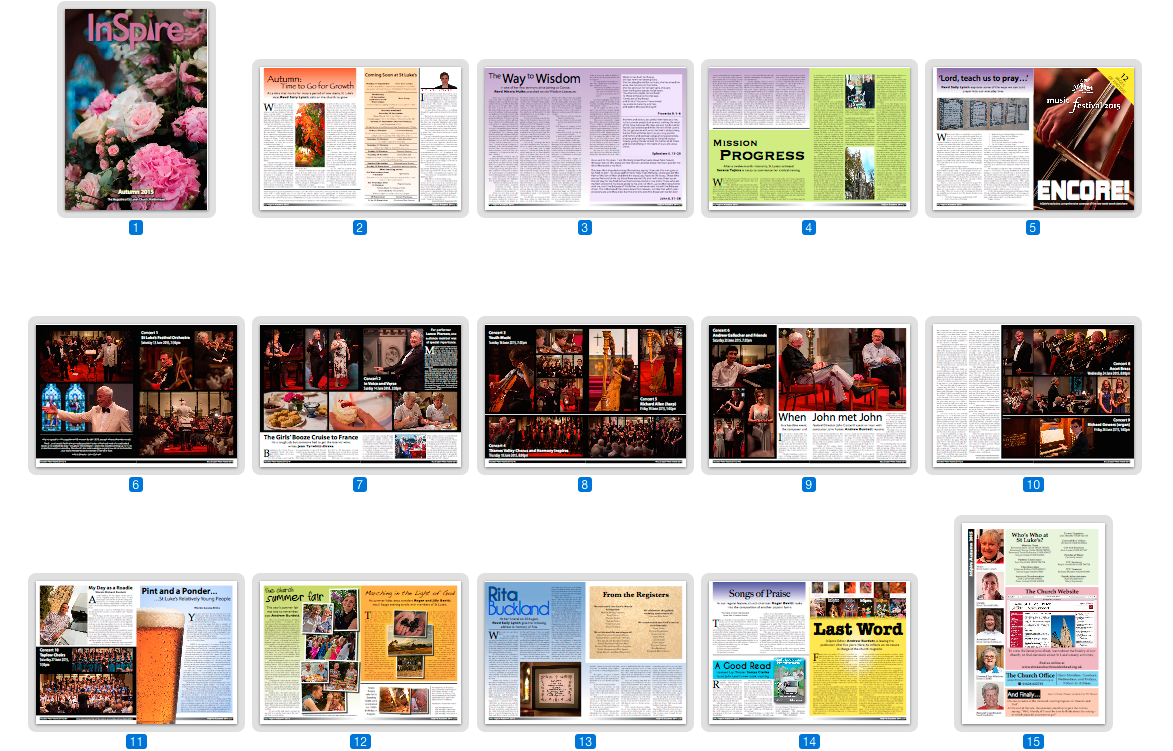 Thumbnails of the pages from the Autumn 2015 edition of InSpire – the St Luke’s Church, Maidenhead, parish magazine.

I’ve written before about how hard it can be to be a Christian in today’s world. This time last year, I remember being newly troubled by the unfolding horrors of the so-called Islamic State, percolating at last into the public’s consciousness. The world suddenly became aware of an unprecedented level of evil, integral to that organisation’s very being.

It’s one thing being aware of something, though. It’s quite another being directly affected by it.

But that, in simple terms, is where we’re at now. As the ripples of the Syrian conflict spread out across the planet, this summer’s narrative has been one of people displaced, and people arguing what to do about it all. As flimsy little boats continue to be launched into the Mediterranean, refugee camps are bursting at the seams.

People are desperate to be safe — and, yes, to many that means they’re desperate to reach Britain’s borders. I recently attended a journalism conference at which the writer AA Gill was a speaker. He openly admitted – in words that are perhaps best left out of the church magazine – that he’s a divisive figure. Some people love his unique brand of snarling critique, others find his acidic reviews unnecessarily unkind.

“I understand that that style of my writing is the marketable side of me,” he explained, “but it’s not the side I wish to be judged on.” Referring to the Sunday Times pieces he occasionally writes about life inside slummy refugee camps, he added: “I hope that people will judge me instead on the serious stories I do too.”

At this point, he made a fascinating point.

“The story of our time is one of people moving: people holidaying, people forced to move, people seeking a better life.” None of this – to this extent, certainly – was possible in a bygone time.

That statistic made me really sit up.

In many ways, it’s easy to feel blessed that we live in a time in which, for us, travel is so easy. Personally, though, I struggle to balance that feeling of being ‘blessed’ against the reality of, for example, the refugees’ plights. How narrow-minded it seems to unquestioningly ‘give thanks and praise’ to our Lord when it is religion forcing others to leave their homes and the ones they love.

I don’t have the solutions, but – for what it’s worth – I pray for those who do.

InSpire’s Editor, Andrew Burdett, is leaving the publication after five years. Here, he reflects on his tenure in charge of the church magazine.

Forgive me, dear reader, if I allow myself this last page to say goodbye. Yes, for me it’ll be tear-sodden and sentimental, and you’re perfectly entitled to, at this point, flip over, read the back-page joke, and put the magazine on the pile in the living room.

But this, the thirteenth InSpire I’ve compiled, is to be my last. That’s five years’ worth of editions, with 332 pages and something like 124,991 words. I’ve been fortunate to be able to rely on a small but committed band of regular contributors, as well as a wider pool of writers able to be called upon to offer their perspective on certain events. To all those who’ve written for InSpire over the last half-decade: thank you. It’s you who’ve made it what it is — a record of church activity; a source of reflection and, perhaps, inspiration; and a guide to some of the events, services, and provisions in the parish.

I owe a lot, too, to my predecessor, former vicar Richard Holroyd. He took advantage of desktop publishing and colour printing to create the stand-out publication I took on in 2010. I hope the design changes I have introduced in my time have built upon what was already a great magazine.

Certainly, the magazine today features a lot more photography than ever before — in many ways, InSpire has provided me with a mandate for my otherwise obsessive picture-taking. I hope that with the ubiquity of the smartphone – containing in one package the tools to take a great picture and immediately email it off to the magazine inbox – photography can remain a key part of InSpire. There’s truth, you know, in the old saying that ‘a picture says a thousand words’.

You’d probably expect me to modestly say that taking on the reigns to InSpire just sort of happened, rather than being part of a premeditated plan. In fact, no. It was an unashamed land-grab, through and through. Richard’s departure as vicar left a vacancy in the magazine editor’s chair: a vacancy I was sure would provide useful experience for my long-dreamed career in journalism.

It’s in pursuit of that career that I now leave InSpire — my next step, on what will surely be a very long pathway, is to the University of Sheffield’s Journalism Studies course. People ask: ‘Why don’t you just edit it in the holidays? You students get long enough, don’t you?’. Well, this is true… but whist it’s a technical possibility, it would be difficult to continue pouring love into a publication produced at a church from which, for a lot of the year, I’ll be absent.

And besides, it’s time to go. I’ve had my stint; now it is time to leave my baby in the very capable hands of James and Louisa Ellins. It’s worth remembering, though, that they’ll have another, rather more important, baby on their hands from mid-October. My best wishes go to them at this exciting time.

I shall continue to read InSpire, following with interest any new direction that the Ellinses take it in. Sitting down with them recently, I realised they’re buzzing with brilliant ideas; they made suggestions for material that I can’t help wishing I’d commissioned during my time!

With them now at the helm, InSpire will surely remain – in the words of the former Bishop of Oxford, John Pritchard – “one of the finest magazines in the Diocese… and probably, too, one of the best in the country”. 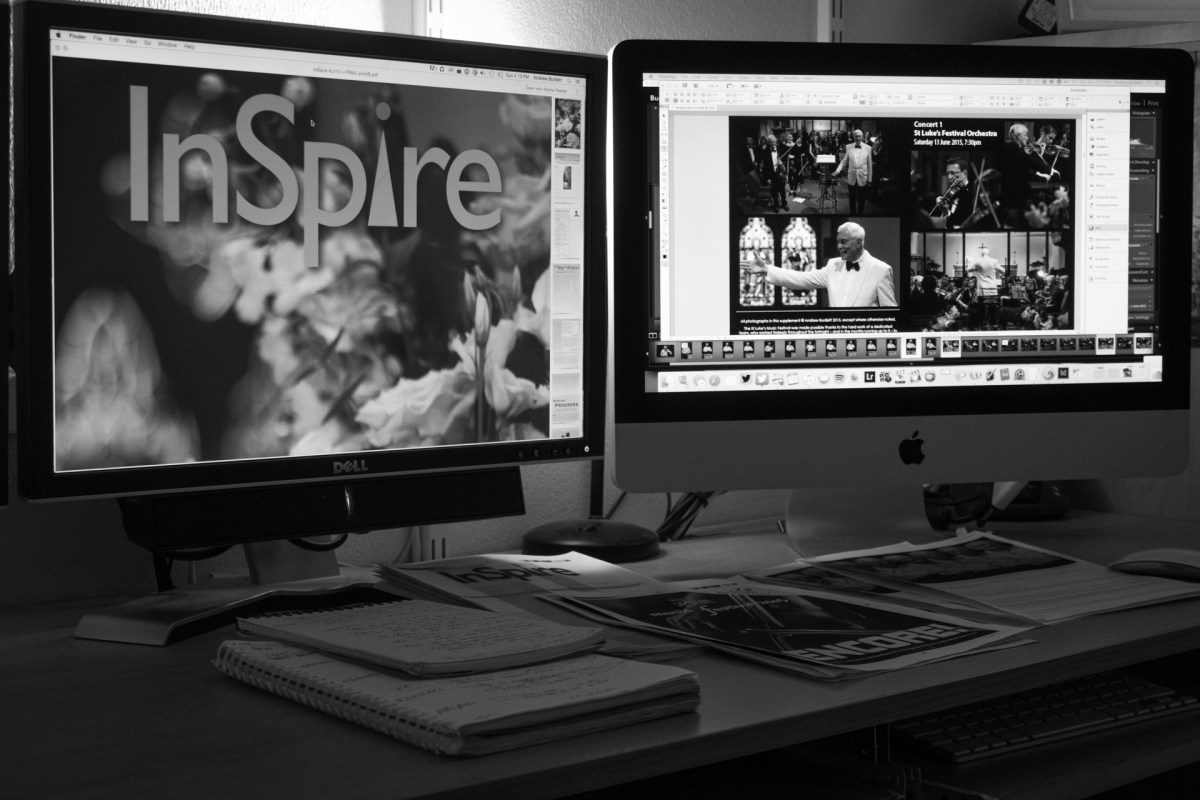