Today at noon, I found myself at White Waltham Airfield in Berkshire, reporting to reception for an introductory flying lesson. 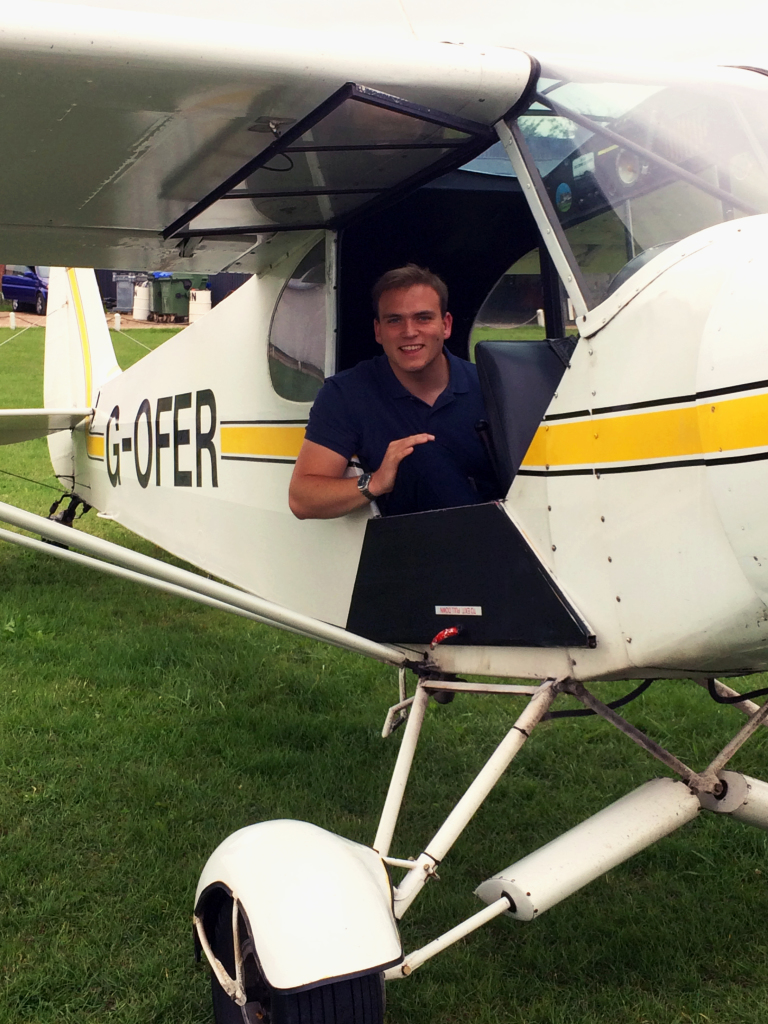 Andrew Burdett sat in the passenger seat of a PA-18 150 Super Cub. He had just landed at White Waltham Airfield after enjoying a half-hour introductory flying lesson.
[PHOTO: Kristen Paskins 2015]

The gift of my friends and neighbours, Kate and Andrew Richards, I had originally been hoping to use my voucher at the end of last summer. Circumstances meant, though, that this wasn’t possible until early-November. The long-awaited day started bright but by the scheduled three o’clock departure, the wind had picked up. A phone call from the airfield team confirmed my fears: the flight was off.

I saw no sense in rebooking it until after the winter, as the unreliable weather would likely lead only to further disappointment. Instead, I waited until mid-April: it would be something to look forward to amid the post-Prague blues, after my return from the Taplow Youth Choir tour earlier that week.

Fortunately, the pleasant spring weather looked much more promising. Unfortunately, the plane was broken and thus out-of-action. Once more, the voice on the phone rang to break the bad news, and to invite me to rebook again.

So finally, today, more than a year after being given the voucher (supposedly valid for just six months), I made my way out to the aircraft under the direction of flying instructor David Coe.

“You must be a veteran of this, then?”, I offered cheerfully. “No, not really,” his dry response: “They found me at the Job Centre this morning and offered me a role flying planes.”

His wry humour belies the fact that Coe is a long-standing committee member of the West London Aero Club, the largest flying club in the UK. Based at White Waltham, they operate a number of different aircraft and provide teaching to novices like me, as well as to those preparing to go solo. For today’s half-hour introductory lesson, Coe led me to a Piper PA-18 150 Super Cub monoplane.

The history of this light utility aircraft is fascinating. 15,000 Super Cubs are believed to have been produced over its nearly 50-year-long production run. Used for everything from spraying cropfields to towing gliders – and, with slight adaptation, capable of landing on the toughest of terrains: snow, sea, and sand – the PA-18 and its variants became the backbone of the flying stable. Interestingly the plane’s forefather, the Piper J-3 Cub, had an even greater production run: in less than a decade, 20,000 were built, and at its peak one was being produced every 20 minutes. For this reason, as well as its simplicity and affordability, the original Cub has long-drawn comparisons to the Ford Model T.

Its military background is also worth mention: the L-4 variant of the J-3 was used extensively towards the end of World War II as a spotter plane. During Operation Overlord in 1944, its low-level manoeuvrability and greenhouse-like glazing made it perfect for identifying the siting of waiting German tanks. Theoretical weight capacities were not always observed; heavy radio communication equipment often tipped the balance, as did the improvised racks of bazookas packed in case of infantry ground attack.

Fortunately for me (and for instructor David) the Super Cub was built with a slightly increased weight load, and we both fitted comfortably into its two-seat pod. Sat behind him, I was unable to see any of the gauges and meters, but I did have my own control stick which replicated David’s actions. Once up in the air, he challenged me to turn “around the town of Henley”, something I rather struggled with. Part of the problem lay in the fact that I was too eager — I pulled to the left too soon. “Wait until you’ve gone past all of the rows of houses, then do the manoeuvre.”, David explained. He straightened it up and let me have another go, and seemed rather pleased with my second attempt.

Over wide fields we passed; busy road networks and the ribboning Thames below. Still persists the childlike wonder of seeing from above the places one thinks one knows so well.

As we approached Reading, David pointed out the site of the recent bank-holiday-weekend music festival: “They’re still clearing it up, look, more than a week later.” Over the internal comms, we briefly discussed the good homes to which abandoned tents will be sent.

Back down on the ground, Kristen, my girlfriend, and my father were sipping tea in the Aero Club bar. The flying experience came bundled with temporary membership of the seemingly prestigious organisation, allowing for full refreshment whilst I was up in the air. Father later described how gloriously time-trapped the establishment is: sepia-toned pictures hang on the walls, whilst lunch is served to the present generation of air enthusiasts and their friends.

My half-hour in the sky passed quickly, and soon I realised we were preparing for landing. David allowed me to hold the replica control stick whilst he did the landing, but warned against gripping too hard: “The last thing you want to do is override me with this bit”. I can cope relatively well with a bit of a rough ride, but I was glad David warned me in advance to expect a certain amount of bumpiness, as the little wheels met the grass runway. 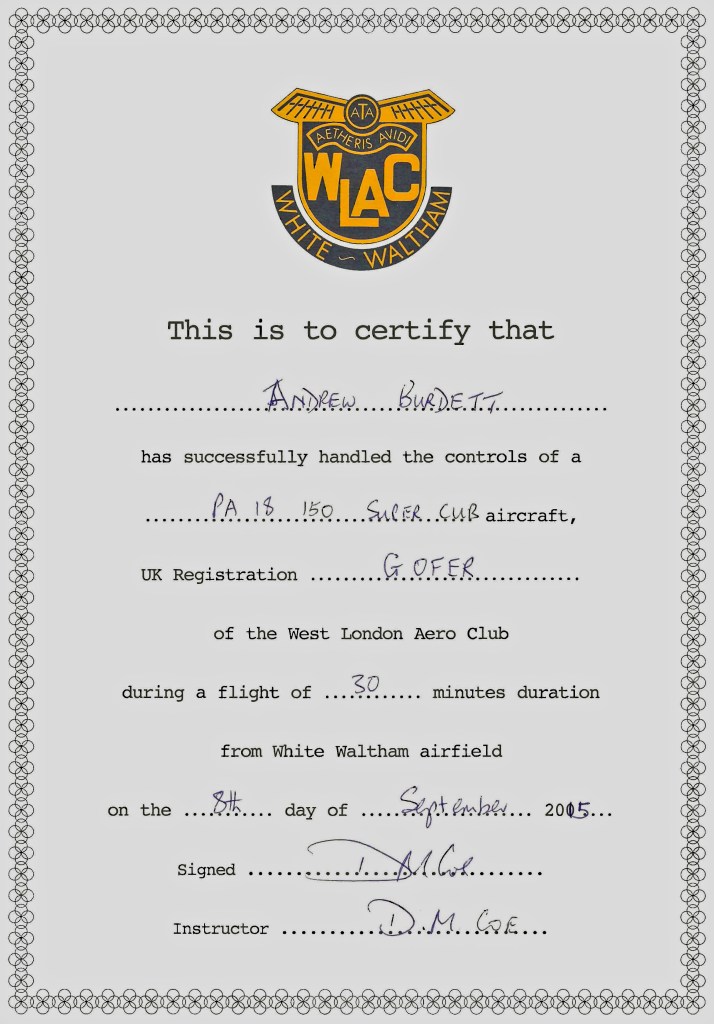 Andrew Burdett’s certificate, issued by his pilot and instructor David Coe, on completing an introductory flying lesson in a Super Cub aircraft.

Soon I was back in the clubhouse, awaiting David’s return from the airfield, where he was finishing his post-flight checks. After about five minutes, he came bearing a certificate — proof of my time in the sky. On the back, he wrote a series of details, many of which were merely abbreviations. It made no sense to me at all, until he explained: “This –. This is the first entry in your pilot logbook. You can copy in the flying-hours if you ever take piloting further.”.

Have I got the bug? I’m not sure. I certainly enjoyed the experience – loved it, in fact – but the idea of me being a pilot just seems so unlikely. Who knows, though? In time to come, today may well be a day I look back on with a desperation to try again. It’s perfectly possible that, a couple of years down the line, I might seriously consider taking flying lessons — after all, the sky, as they say, is the limit.

During my hour at White Waltham Airfield, I had time to record enough footage to create a video record of my experience.

The edited film can be seen in this separate post, which also includes a Production Notes article about how I made it.