Earlier today, whilst again at the helm of the church summer fair’s sound system, I tried to work out how many years I’ve been doing it. I reckon the first time was in 2007 and, breaking only in 2013 when I was away on the school’s Yorkshire Three Peaks weekend, this was my eighth year on the mic.

Despite seemingly bringing more equipment down than in previous years, it was actually a simpler rig than it’s tended to have been in the past. My friend Jake Smith – who usually helps me out with the setting-up as well as with the controls during the day – had lent me three high-quality professional speakers, replacing the hodgepodge selection of reclaimed hi-fis that we used to use. Borrowed from Daryl Mills, a couple of passive speakers and an amplifier, enabling total site coverage without any one part of the garden being ridiculously loud.

I was quietly pleased to draw several kind compliments as the day went on. One lady asked if I did this sort of thing professionally: when I replied to say that I didn’t, she earnestly encouraged me to pursue it as a career. Another, slightly older, gentleman was impressed by my music choices, asking the name of a track by indie-folk band First Aid Kit; a pleasant surprise, as in doing so he verified my picks as being to the tastes of all audiences.

One of my favourite parts of the event is when I get to walk around the garden and talk to the stallholders and attendees. I remember doing this one year and speaking to a mischievous Rob Baughan, whose father was tucked away behind the barbecue. To his horror, through the PA, he heard his son announce: “Well, Andrew, the part of the fair I’m most looking forward to is Dad’s morris-dancing display at quarter-to-three.”. Of course, no dancing had ever been planned, and it was left to Kevin to apologise to the couple who’d stuck around especially.

This year, though: quite the reverse. Reprising a role he’d played first at this January’s social evening, Ian Gilchrist led a number of folk-dances for willing participants. Kevin was, sadly, a no-show, but his daughter Ruth watched on from her face-painting stall, which did a roaring trade all day.

More entertainment came in the form of a small choir of angelic voices from St Luke’s Primary School. Led by acting deputy head Bethany Greenwood, it was something of a reunion for me: a former teacher at Courthouse Junior School, Miss Greenwood remembered me instantly from my own Year 4 days. (Alas, I took a moment longer to recognise her, although in my defence a decade has passed since she last taught me.)

Congregation member Rachel Beaumont brought along a couple of dancing friends, giving a wonderful tap display at 2:15pm, and there were a good deal of sideshows and attractions to keep the punters happy.

Despite all of this, this year’s fete felt a little quieter than previous fairs — a shame, as Michelle Lane had clearly worked so hard to make it a success. It is regrettable that factors outside of her control (most notably the absence of the dance-school, which has, in the past, brought a lot of lunchtime traffic) took a large hit at the event’s financial accounts. Nonetheless, we must be grateful for what there was: fun, sun, and smiles.

The Summer Fair and the Plant Sale held in May raised a combined total of £1,254.94.

My gallery of shots from today’s summer fair follows. Richard Burdett prepares to take a shot on the coconut shy. Phyllis Sigsworth takes a bite out of a toffee apple. [PHOTO: © Andrew Burdett 2015] 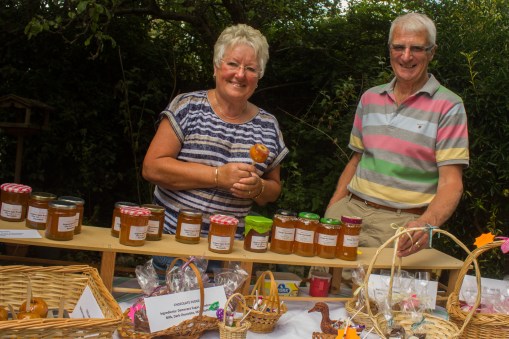 Marmalades and other homemade produce on offer at the St Luke’s fair. [PHOTO: © Andrew Burdett 2015] 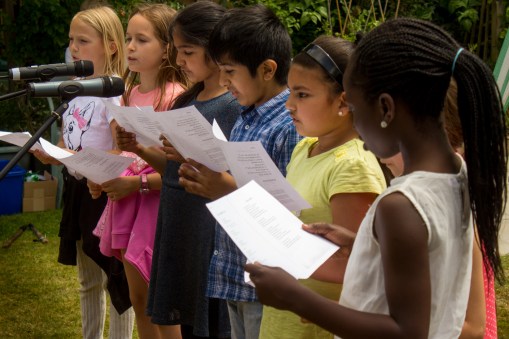 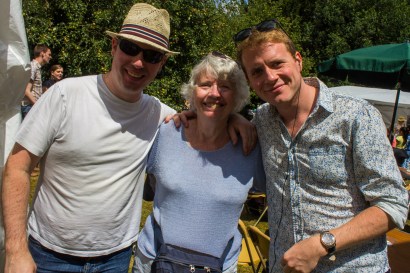 Some congregation members volunteered to participate in the first dance, taking place in the garden at quarter-to-two. [PHOTO: © Andrew Burdett 2015] St Luke’s Church’s new curate, having only been officially installed in the parish a week ago, got involved with the folk dance. [PHOTO: © Andrew Burdett 2015] Tony Lane took care of the barbecue all afternoon, cooking up a storm. [PHOTO: © Andrew Burdett 2015] Traditional diktat was relaxed, as women paired with women and men with men, during the free folk dancing. [PHOTO: © Andrew Burdett 2015] With face-paint still fresh on their faces, Nicola Hulks and Ben Darracott danced in the vicarage garden. [PHOTO: © Andrew Burdett 2015] 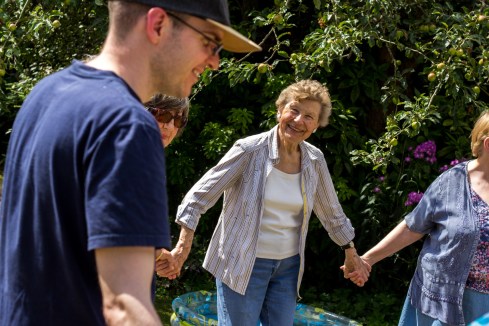 Joan Harnby and James Ellins joined arms for one of the dances. [PHOTO: © Andrew Burdett 2015] Sally Lynch delighted the crowds by participating in the dance. [PHOTO: © Andrew Burdett 2015] 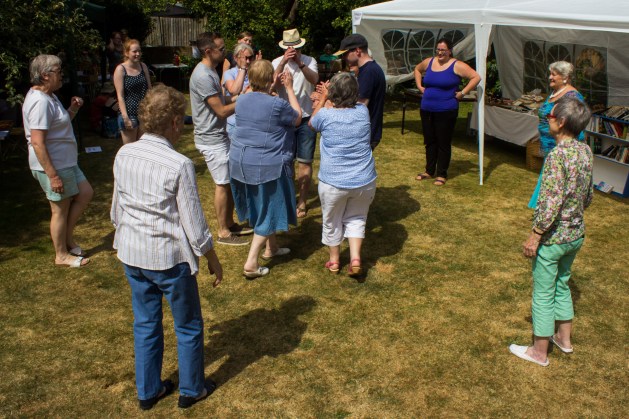 One final dance, after the raffle had been called, took place at 3:15pm – and many of the people who’d made the fair happen took part. [PHOTO: © Andrew Burdett 2015]