Residents of a Maidenhead housing estate could be forgiven for thinking they’d missed an invite to a belated VE Day street celebration this morning, when they woke to the sound of piano music wafting across their common green.

In fact, it was me, banging away at a 1979 Knight upright, just before I lifted it into my brother’s house. 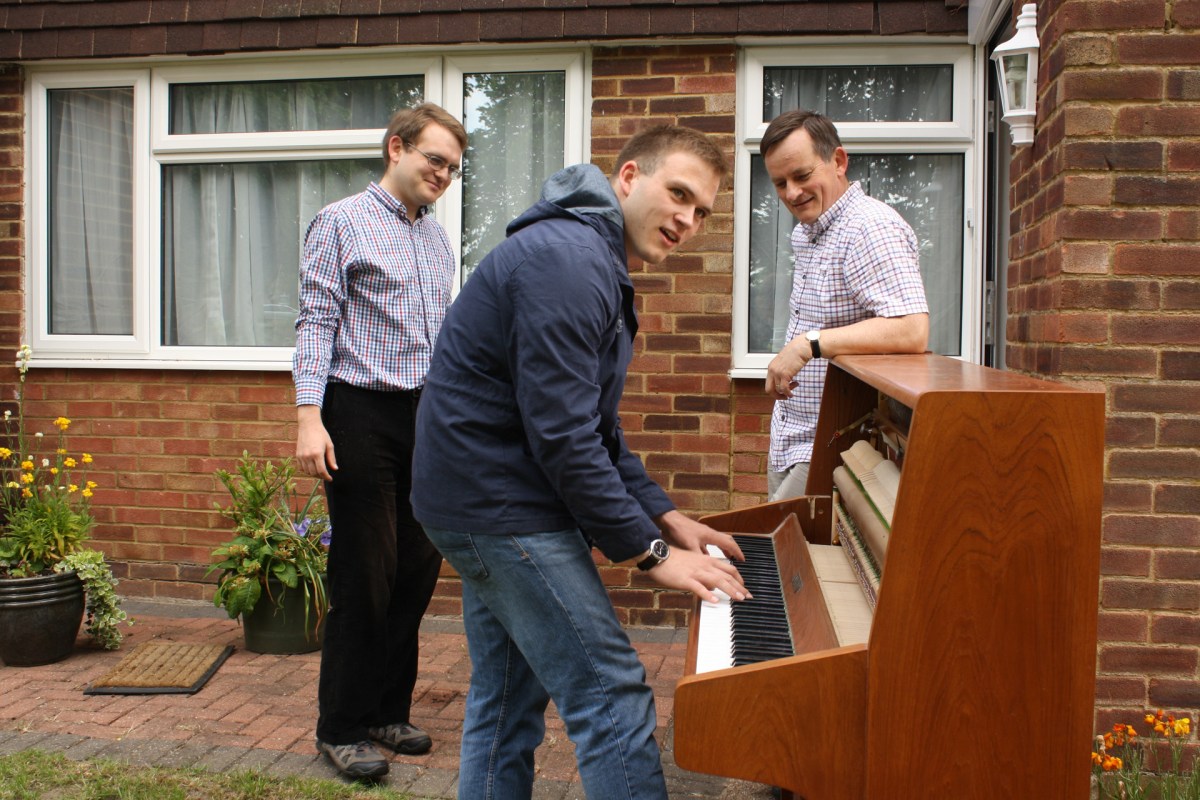 Let me start at the beginning. Nine months ago, Matthew bought his first house: coincidentally, a few doors down from the house my father bought when he first moved down to Maidenhead, and just around the corner from a very active family at church. The matriarch of this family – a wonderful, patient, and extremely generous lady – has, very sadly, recently fallen rather ill, and before she can leave hospital a medical bed must be installed in her downstairs sitting-room.

As a result, the space that the family piano had long called its domain was requisitioned, and there was no choice but to get rid of the instrument. A local piano specialist apparently refused to buy it, or even remove it, leaving the elephant (or rather the piano) still in the room. With a sorry end looming for the decades-old clavier, the family offered it to Matthew at no cost.

If it had been me, I’d have jumped at the opportunity. Personally, nothing serves as stress relief as much as twenty minutes sat at a keyboard. I’m not delusional, mind: I don’t think of myself as a great pianist. No, if the truth be known, I’m actually pretty poor. But there’s something about the power one commands when sat on a piano-stool: suddenly, you’ve got the capability to create great crashing chords, or to wallow in long and legato melodies, or just to listen to the quiet intensity of a repeating riff.

Matthew, though, was less sure. He’s enjoyed the flexibility that his fairly empty living-room has afforded him, very easily moving furniture around to transform his humble bachelor’s pad into a party venue. The addition of a piano could clutter his minimalist space. “Rubbish!”, I told him. “You only need to accommodate it for the next five years, and after that I’ll have somewhere where I can house it.”

And so, relatively early this morning, Dad and I turned up with a stolen trolley to move the spared Knight. The first job was to detach the front panels and walk them around to Matthew’s separately, shedding (admittedly only a little) weight from the overall object. Dad then used a tape-measure to check the length of the piano would fit within the porch, which comes off to the room at 90 degrees. In theory the porch was big enough, and so we began wheeling the piano on its castors towards the sitting-room door. Needless to say, in practice things didn’t go quite without hitch. The plan had been to point the nose of the instrument into one corner of the narrow porch, buying just enough room to swing the other end of the piano around. However, an impressive, expansive hoard of shoes temporarily foiled us in this, so Matthew was ordered to run home and get a large bin-bag to round them up in.

With the shoes out of the way and a space now cleared, I took the strain and lifted my end of the piano over the threshold and into the porch. Dad supported the front and edged the back further into my corner, as I squeezed out from the tight gap I’d found myself in behind.

Next came the most difficult part of the operation: getting the piano out of the house altogether. There was only enough space for one of us to stand in the porch with the bulky instrument, so I stood outside on the doorstep. The doormat would just get in the way, so I kicked that aside and brought up the wheeled trolley to the door. Ready to lift, I took the weight again but immediately realised there was a problem. The trolley wasn’t in the right position at all.

In order for it to work, we had to get the trolley right below the centre of the instrument; its midpoint pretty much dead in line with middle-C. This was not easy when the concrete surface outside the property was on a slight incline, making it impossible for me to position the trolley as required. Of course, a sensible suggestion would be for a third person to hold the trolley still whilst the piano was lowered onto it. However, dear reader, I might remind you that both Matthew and the homeowner’s daughter were trapped inside, their access to outside blocked by the Joanna.

Time was very much of the essence: poor Dad wouldn’t be able to hold the weight all day. But then, fortuitously, at exactly that moment, Mum came strolling across the green having driven around separately. I called out to her: “RUN! I really need some help!”. She immediately realised what she needed to do, and in a jiffy the piano was ready to roll. 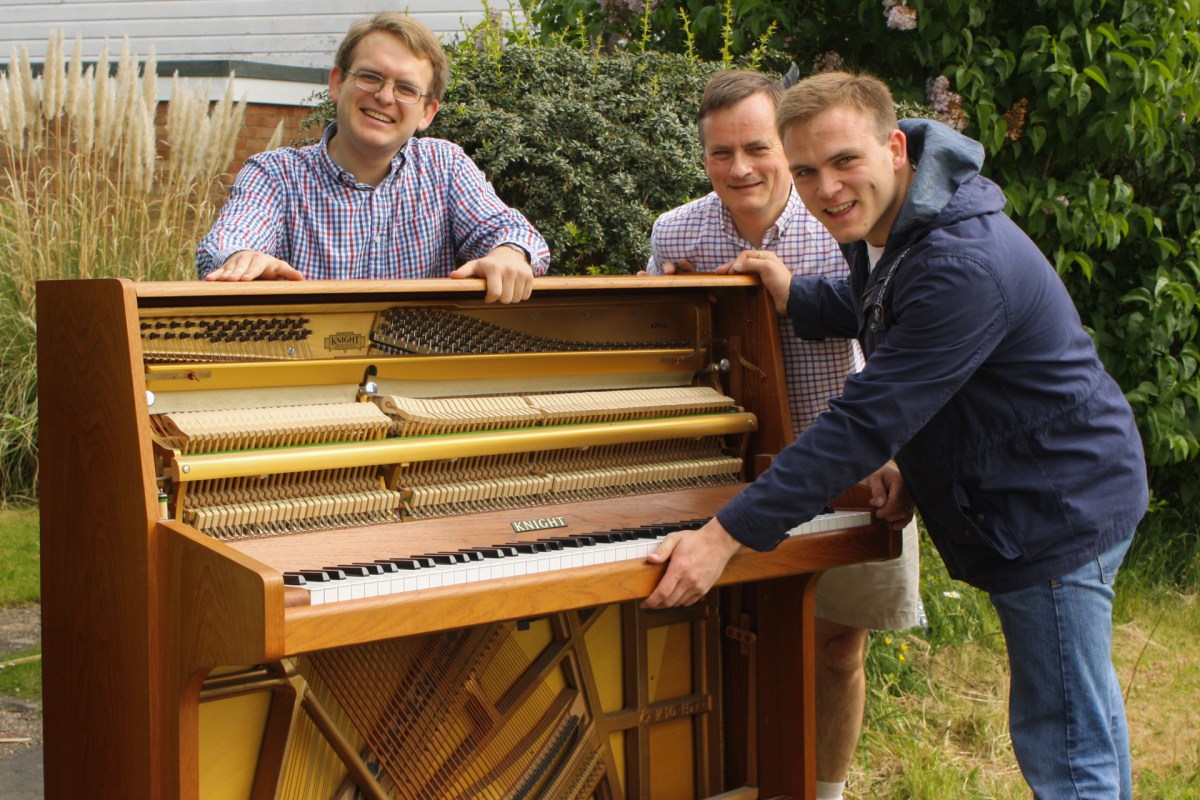 Matthew, Richard, and Andrew Burdett smile for the camera, during the piano move.
[PHOTO: Ann Burdett 2015] 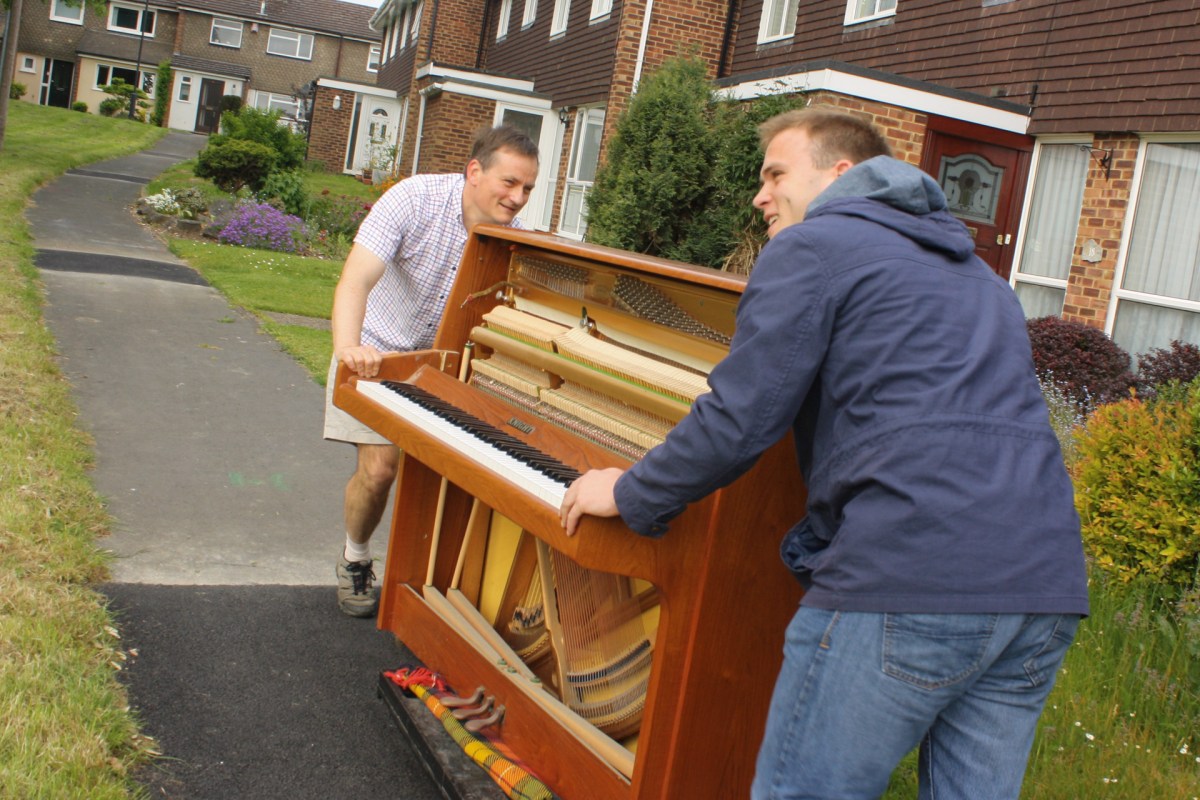 Moving the instrument would have been virtually impossible, were it not for a handy trolley, leant to us for the job.
[PHOTO: Ann Burdett 2015]

At this point, I should explain two things. First — if you were wondering, we couldn’t use the delicate castors on the piano itself as they would not have been able to cope with the rough tarmac, hence the need for the reclaimed Harrods stock trolley. Second — when I said earlier that these neighbours lived “just around the corner”, I really do mean just around the corner: within less than two minutes, we were at Matthew’s door. 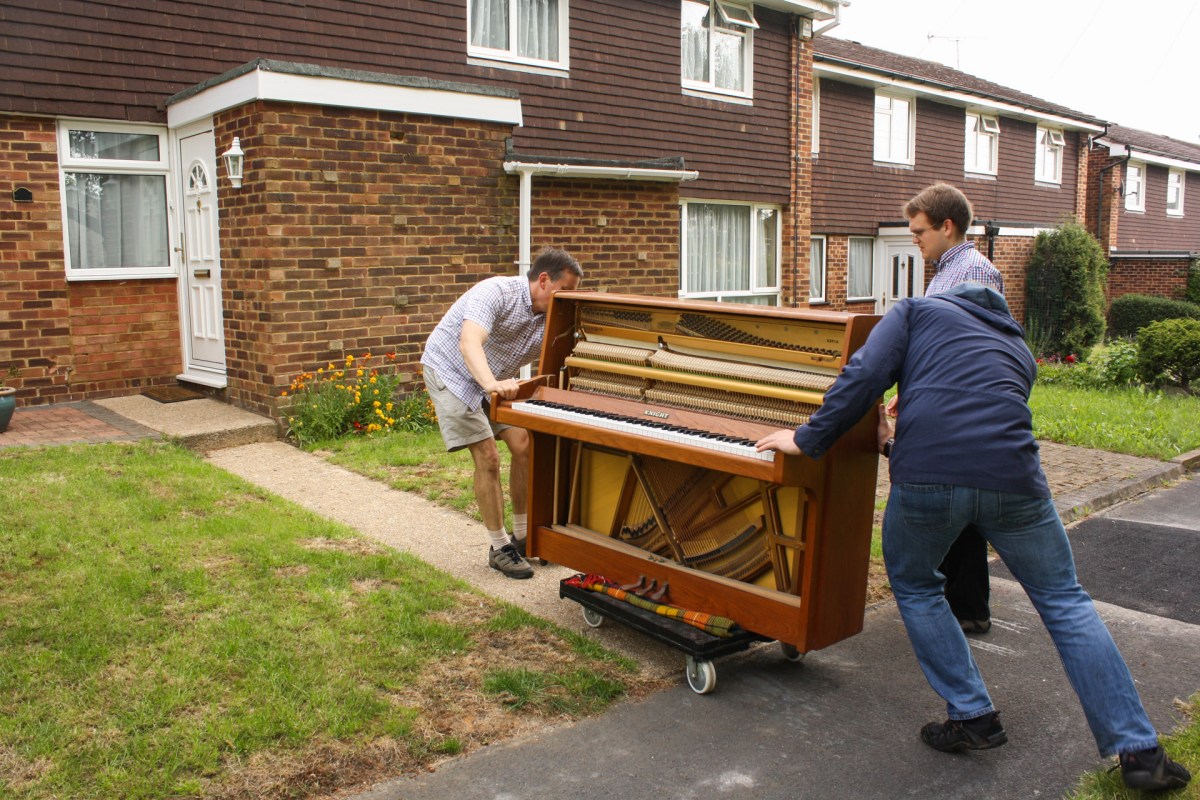 Manouevering the piano over his threshold, it took just two minutes to wheel the piano along the footpaths of Matthew’s estate.
[PHOTO: Ann Burdett 2015]

Just before we repeated the earlier process in reverse, though, I took a moment to marvel in the novelty of this event. Here I was, outside a row of terraced houses, with a bloody great piano that Dad and I had just moved. I might note, Matthew’s resting of his hands on the lid as we pushed fooled nobody; it was all down to me and my surprisingly hunky father.

To mark this momentous occasion, I gave an impromptu open-air recital, bashing away at the keys to the bafflement and eventual delight of some children over the green. One by one, they came out and played as my simple tunes filled the air. 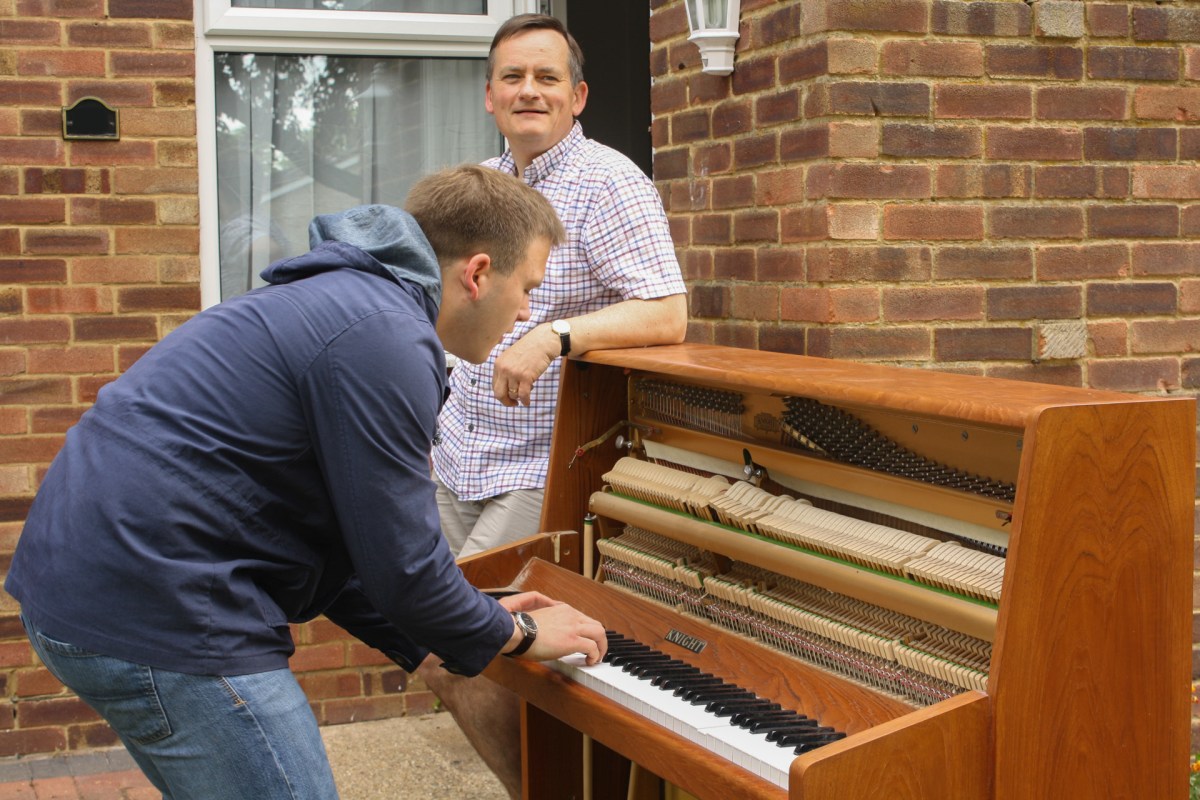 “You’d be mad not to”, Andrew explained to his father, Richard, as he started playing.
[PHOTO: Ann Burdett 2015]

Sat in Matthew’s back garden fifteen minutes later, piano dusted down and in its new home at last, Dad and I enjoyed a well-earned cup of coffee — both quietly proud of our morning as volunteer piano movers. 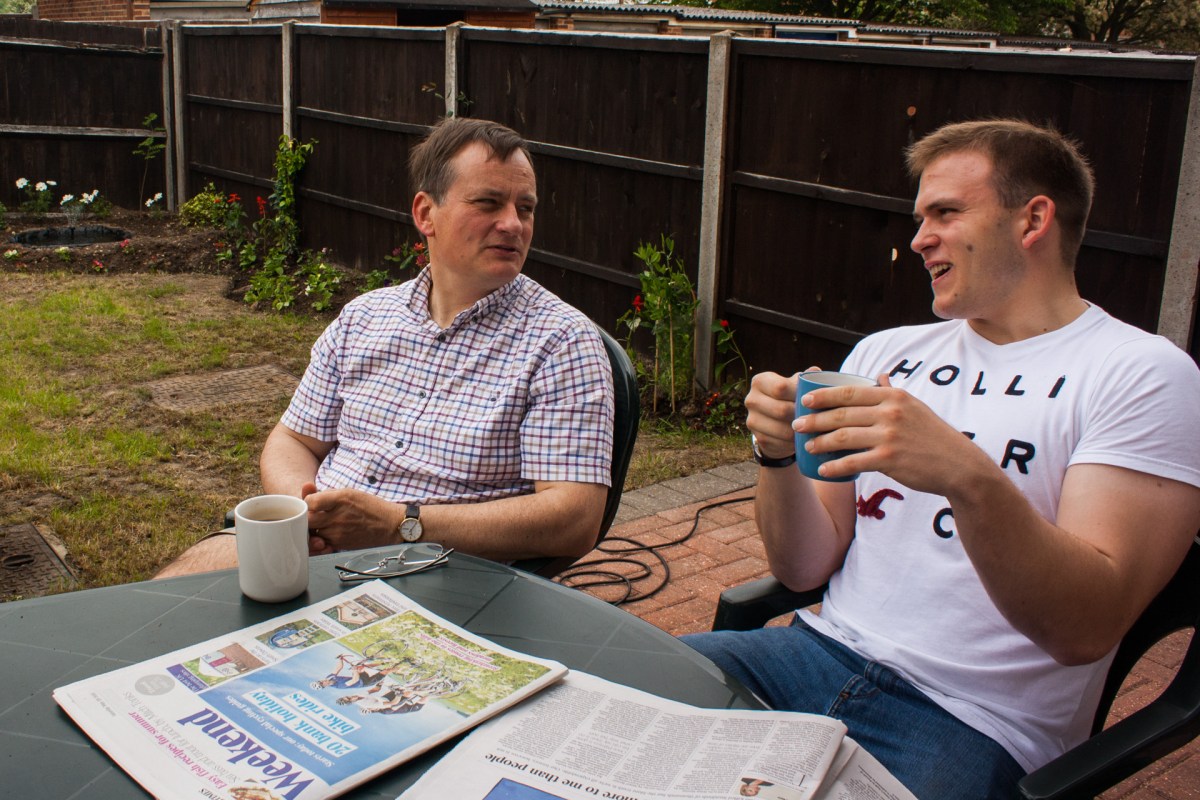 “You’d be mad not to”, Andrew explained to his father, Richard, as he started playing.
[PHOTO: Ann Burdett 2015]