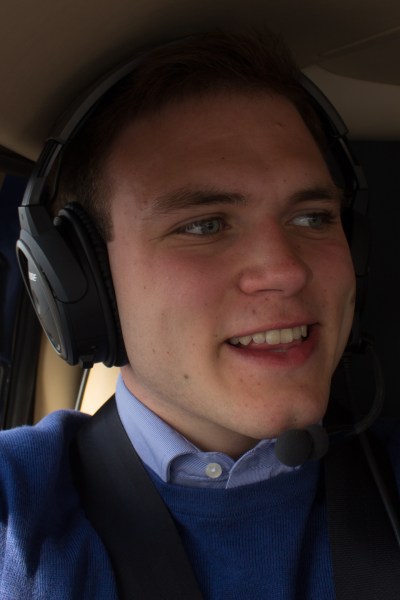 As soon as it was booked, I knew I’d want to make a video of my upcoming helicopter flight over London.

On the actual morning, we arrived at Elstree Aerodrome in plenty of time of the 10:00am take-off, so an opportunity presented itself to film the opening piece-to-camera. There’s no exaggeration in the script: it really did take me the best part of a year to finally decide on a date, but I’m glad I waited until the spring because, as it turned out, it was such a clear day.

Once checked-in, I was given a brief safety lecture, during which it became worryingly apparent that there was no guarantee I’d get a good view of London below. It seemed to me that the operating company try to fleece you at every opportunity: on top of however much you’ve already paid, it’s upwards of £30 if you want a front-seat upgrade (the only way to guarantee a half-decent view), £10 to change the name on the booking, and another tenner for a crude ‘official’ photograph of my “special day”. To prevent you from just taking your own, you’re banned from using a camera until you’re actually sat in the helicopter, on the pretence of “strict safety and licensing rules”. Worse, not even your watching family can take pictures; the closest they can get is a few hundred feet away from the aircraft, ‘but don’t worry: our official photographer can capture photos…’. Now, look, I get it: they’re trying to run a business, and they’ve got to make money. But if you want people to go home and tell their friends what a lovely time they’ve had, they’ve got to actually have had a lovely time. The continual, unnecessary restrictions almost threatened my enjoyment of the morning.

Unwilling to cough up for a view of London (I had, perhaps naively, assumed that this was included in the cost of my ‘London helicopter flight experience’), I realised I instead needed to maneuver myself to be the first to board the helicopter. By doing so, I’d guarantee myself one of the two window-seats on the back-row of four — and, crucially, some decent shots for my video. My plan worked and I was soon strapped in. Meanwhile, Mum and Dad had positioned themselves in a corner of the Aerodrome cafe, giving them (with a long lens) a view over to the helipad.

With the other five passengers belted in, our pilot made his last checks and we set off for London. The first instantly-recognisable bit came in the shape of the Olympic Park, and I knew that this would be of interest to viewers. Although I loved spotting all the lesser-known landmarks, like the old Times offices and the Starbucks at St Katharine’s Docks, I tried to focus exclusively on the buildings that make up the city’s distinct skyline.

Trying to get well-framed shots was much harder than I’d been expecting. Leaning right up against the window, I did my best to anticipate what we were about to pass, focus up, and get a second’s worth of video before we flew by. This job became all the harder as we reached the climax of our flight, approaching Westminster, when the windows started steaming up and I had to wipe condensation from the glass between shots.

Overall, I am relatively pleased with this video. The ending’s a bit abrupt, partly due to the music’s sudden stop (it’s just royalty-free stuff, appropriately entitled Cockpit) and partly because of the lack of material. Dad did his best to film me disembarking the helicopter, but there was no time afterwards to do a brief piece-to-camera reflecting on the experience. Thus, in lieu of this, I close the film with a few last shots looking out to the East, before the usual end title-card. I thought it appropriate to credit my sister in this space, as it was she who paid for the flight: therefore, below the recording dates, a simple line reads: “With thanks (and love) to Harriet Burdett”.