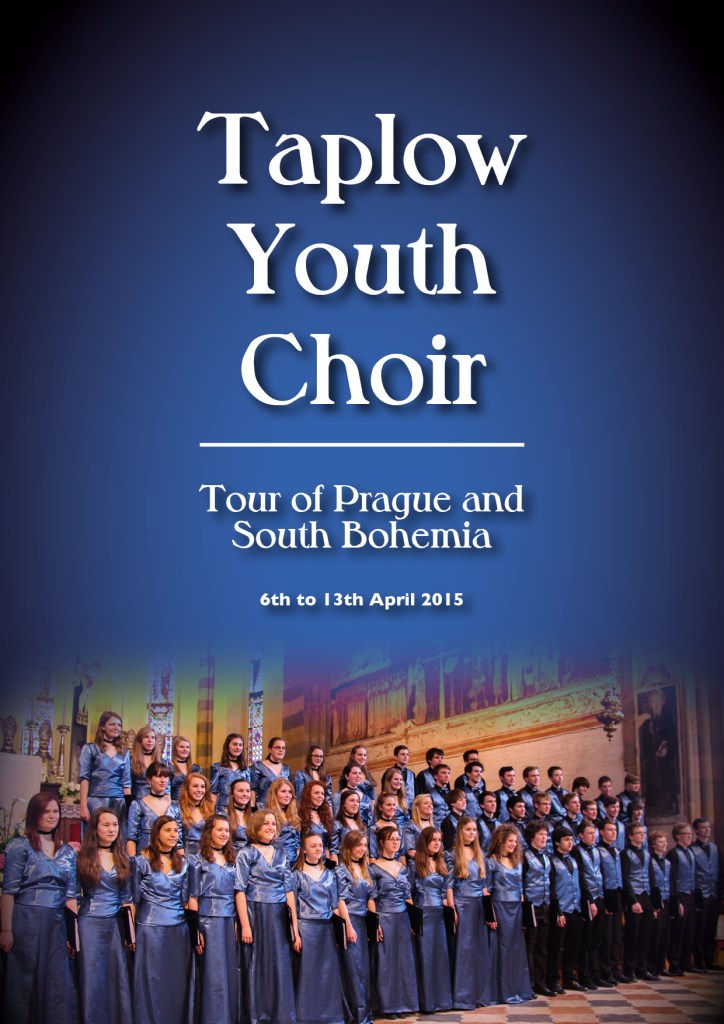 The front cover of the Taplow Youth Choir tour programme 2015.

Today, as Taplow Youth Choir assembles on the village green – awaiting a coach to Heathrow, and from there a plane to the Czech Republic – I officially unveil the programme for this year’s choir tour. Hard copies have been handed out to tour members and their families, and we’ll be flying 400 more out with us later this morning.

Throughout the next week, we’ll be singing in churches and concert venues across South Bohemia and Prague, bringing our wide repertoire of music – sacred and secular – to the Czech people. Germany is as close as I’ve ever got to that part of the world, so I am looking forward to seeing the cultural, political, and historical delights that the region has to offer.

Really, the programme is far more a souvenir for singers than it is a concert guide: the publication is, after all, written entirely in English. Furthermore, I’ve noticed that the ready acceptance of free giveaways is far less common overseas than in Britain, and it’s often difficult therefore to persuade audiences to take a free copy. Nonetheless, our tour staff will doubtless do their dutiful best to distribute our programmes at each of the five concerts.

Over a warming pint in her local one cold January evening, Taplow Choirs director Gillian Dibden expressed her great joy in having seven ‘gap year’ boys not only remain in the choir, but also join the Tour. “Forsooth,” I replied, “half the reason that many of us took gap years in the first place was to participate with your tour”.

To the uninitiated: Taplow Tours are somewhat the stuff of legend. Whilst extremely hard work (virtually every possible opportunity to rehearse in the waking day is seized upon), there is also a good deal of sociable downtime built into the itinerary. It’s so important that choir members have an opportunity to get to know one another; I genuinely believe that the quality of music-making improves dramatically if this is the case.

Going back to my pub anecdote, I began to wonder how best I could help Gillian with the preparation for the tour. On both the previous tours I have attended, one thing that had always struck me as slightly letting us down were the Tour programme brochures. Though they were professionally printed, they were not professionally designed. Indeliberate white space was rife throughout. Pictures were rarely of a high quality. Text was not presented in the most attractive typefaces.

I volunteered to take charge of the programmes and, true to form, rather forgot about it for some time. Some information did dribble in (there were the biogs for Gillian and the other tour staff, a summary of Taplow Youth Choir’s achievements, and the acknowledgements for the back page), but it was not until the week before last that I received the first of the concert running orders. These went on to change slightly in response to one of the concert venues requesting a more spiritual emphasis to their programme, and as a result the programmes were not finalised until last Saturday.

Using different weights of Gill Sans, I hope I have been able to present concert information clearly and logically. Titles and headings are presented in Melbourne Bold, restoring some of the Taplow Choirs branding heritage to this publication, although a problem with its kern table and with licensing restrictions meant I nearly resorted to the visually similar Musketeer Extra Bold. Colour was generally converted to CMYK (for the printers) by InDesign’s export process, although in a couple of instances the conversion was made in Photoshop. Photoshop also came in handy in a few cases where photographs were to form the background for text – you wouldn’t believe the hours spent trying to blend the sky in Page 12’s picture to the page background.

Even finding the photographs proved immensely time-consuming. I did not have specific addresses for any of the venues, and for some I had to make educated guesses as to which – of several neighbouring, identically-named churches – the correct one could be. A lot of pictures could only be found by searching for the venue under its Czech name; others required googling a different wording of the English translation I’d originally been supplied. In the end, I was, thankfully, fairly successful in finding rights-ready pictures, using a combination of Wikimedia and Flickr. But for the picture accompanying Tuesday’s concert order, the only suitable images I could find were from a website that appears to allocate funding for good causes according to a public online vote. I never managed to identify the rights-holders, and had little option but to use the picture attributed simply to Kompas.

And then I arrived at the difficult issue of finding pictures of the choir itself. There are not, really, a great many high-resolution photographs of the choir singing in its distinctive uniforms, the one superficial factor that makes our youth choir the Taplow Youth Choir. Professional photographs from the Youth Choir of the Year final have been used, and continue to be used, endlessly since 2008… despite the last remaining member of that award-winning line-up having graduated from the choir in the summer of 2013. We did recently perform in a big-budget, joint-choirs concert at St Alban’s Cathedral, and I had been hoping that the photographer present would snap all aspects of the evening. If he did, the pictures of Taplow’s lone set never materialised: and, thus, still blank spaces remained in the design.

With a couple of file photos unearthed in my Lightroom catalogue, filling the front and Page 5, I was still left with two pages to fill. I’d been thinking about ‘interviewing’ a handful of members – the youngest going, the oldest member, one of the soloists, et cetera – and plying their enthusiastic words alongside pretty individual profile shots of them. For a number of reasons, I eventually decided against this, and asked permission instead to photograph last weekend’s plain-clothes rehearsal. Unfortunately, Gillian chose this session to hand out a lot of new music, and as a consequence my earlier shots featured only confused-looking grimaces buried deep in copies! Yet to my great relief, on hearing of my troubles, Gillian did agree to run one of the better-known, jollier numbers in the last five minutes, so I could photograph happy faces – which always work better in a brochure like this! (I am grateful to my friend Phil Bray for loan of his 50mm f/1.4 lens.)

Frankly, this is one of those rare projects I’m truly glad to see the back of. True, in taking it on, I have learnt a lot. I finally understand the basics of colour profiling, have taught myself about Rich Black, and now know how to use cmd.exe to strip embedded prohibitions from a TrueType font. But for whatever reason, the final comping just seems to have dragged on for grossly longer than it ought to have. Still — the thrill of receiving a box of 500 A4 booklets, 2,000 sheets of finest 170gsm silk-printed paper, presenting the world a design that came off your little computer in a corner of your bedroom? It gets me every time.

You can download a web version of the 2015 Taplow Youth Choir Tour programme here.