After a scandal that had rumbled on for plenty long enough, a good man lost his job and was left feeling understandably aggrieved. Shown the back door by the BBC, he couldn’t help but feel he had been unjustly treated. In spite of vehement protests outside the corporation’s offices, it was too late: the decision had been made.

The erstwhile Director-General Greg Dyke was perhaps, then, well-placed to comment on the whole sorry saga the BBC found itself in regarding Jeremy Clarkson. On Monday, Dyke told reporters: “I’m glad I’m not the executive who has to take that decision because if you were, you can’t win either way now”.

He was right. In the eyes of a million signatories, the suspended Top Gear presenter deserved to keep his job. And yet, plainly, the BBC would then be opening itself up to a barrage of angry voices; “if he remains, a lesson will be taught that if you are well connected and wealthy, you can do as you please”, argued Owen Jones last week.

Thus, after an inquiry chaired by Ken MacQuarrie, Director-General Lord Hall was the unfortunate soul stuck with the impossible decision. Either he disappoint millions of loyal Clarkson fans around the world, or he disgrace the corporation to the chattering classes. He chose the first option. 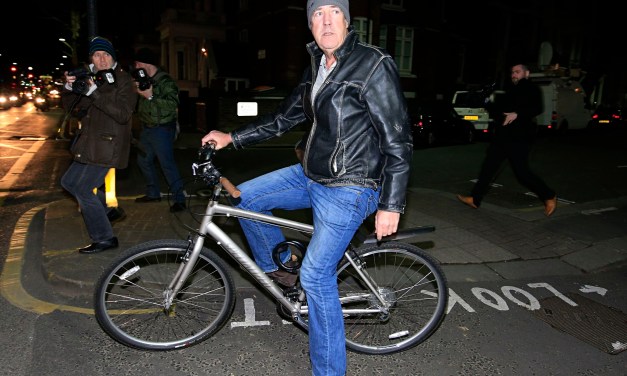 Jeremy Clarkson, pictured on his bicycle tonight, after hearing the BBC is not going to renew his Top Gear contract.
[PHOTO: Jonathan Brady / PA]

A part of me can’t help but feel disappointed at that. Clarkson’s departure obviously spells the end for Top Gear in its current guise — a huge shame, as I’ve long loved the way it’s made. It’s cleverly produced, beautifully shot, and cinematically edited. It’s brilliant television. In all the discussion of the last couple weeks, people have struggled to see how Clarkson’s suspension can bring down one of the BBC’s best-loved shows (not to mention most valuable brands). The answer lies in the fact that Clarkson, alongside his Repton schoolmate Andy Wilman, himself invented the programme from the ashes of ‘old Top Gear‘. Somehow, he identified a format for a car show that anybody could watch and enjoy without even knowing how to lift the bonnet on their (or, just as likely, their parents’) car. Ambitious challenges filmed in amazing locations were the backdrop to what became a sitcom about three middle-aged mates, although the programme honoured its more ‘die-hard’ car fans by featuring some of the world’s finest cars driven by the mystical racing-driver, The Stig. “We have to make the programme for everybody,” Clarkson once said, “Top Gear is a very broad church. For every one person who can name the firing order of a Lamborghini V12, we have ten people watching who are not sure what a Lamborghini is, and a hundred who couldn’t see over the steering wheel.”

With my ‘sensible’ hat on, though, I fully understand why Lord Hall made the decision he did. Really, he had no choice. If it had been under any other broadcaster, Clarkson would probably have got away with punching a producer over the lack of catering. Yet, (and in Clarkson’s own words, “due to the unique way the BBC is funded”) there’s no way that a public-service broadcaster could be seen to have permitted such behaviour. That’s despite the fact that Clarkson reported himself to his managers, having sought forgiveness from his victim Oisin Tymon (who, it must be noted, “offered no retaliation” during the 30-second physical attack, and who took himself to A&E). Lord Hall’s statement was genuine, sincere, and well-measured. Cleverly, it also addressed the concerns of those who feared this episode was being seized upon by BBC managers, as a chance to get rid of a ‘politically-incorrect’ member of the Chipping Norton set: “We all know that Jeremy is a huge talent, and has made an extraordinary contribution to the BBC. His voice, and voices like his, have an important place on the BBC. But not at any price.”

“It is with great regret that I have told Jeremy Clarkson today that the BBC will not be renewing his contract. It is not a decision I have taken lightly. I have done so only after a very careful consideration of the facts and after personally meeting both Jeremy and Oisin Tymon.

I am grateful to Ken MacQuarrie for the thorough way he has conducted an investigation of the incident on 4th March. Given the obvious and very genuine public interest in this I am publishing the findings of his report. I take no pleasure in doing so. I am only making them public so people can better understand the background. I know how popular the programme is and I also know that this decision will divide opinion. The main facts are not disputed by those involved.

I want to make three points.

First – The BBC is a broad church. Our strength in many ways lies in that diversity. We need distinctive and different voices but they cannot come at any price. Common to all at the BBC have to be standards of decency and respect. I cannot condone what has happened on this occasion. A member of staff – who is a completely innocent party – took himself to Accident and Emergency after a physical altercation accompanied by sustained and prolonged verbal abuse of an extreme nature. For me a line has been crossed. There cannot be one rule for one and one rule for another dictated by either rank, or public relations and commercial considerations.

Second – This has obviously been difficult for everyone involved but in particular for Oisin. I want to make clear that no blame attaches to him for this incident. He has behaved with huge integrity throughout. As a senior producer at the BBC he will continue to have an important role within the organisation in the future.

Third – Obviously none of us wanted to find ourselves in this position. This decision should in no way detract from the extraordinary contribution that Jeremy Clarkson has made to the BBC. I have always personally been a great fan of his work and Top Gear. Jeremy is a huge talent. He may be leaving the BBC but I am sure he will continue to entertain, challenge and amuse audiences for many years to come.

The BBC must now look to renew Top Gear for 2016. This will be a big challenge and there is no point in pretending otherwise. I have asked Kim Shillinglaw to look at how best we might take this forward over the coming months. I have also asked her to look at how we put out the last programmes in the current series.”

Quite what led to the events of that night at the Simonstone Hall Hotel may never be fully known. Steve Hewlett, of Radio 4’s The Media Show, asked earlier today: “Were the warning signs of extreme personal stress acted on, or even noticed at all? How did Jeremy Clarkson come to feel, according to his friend AA Gill, that he was ‘working for the enemy’?”

Clarkson has weathered many storms during his time. With each new ‘scandal’, traffic-hungry news websites have taken much delight in providing clickable timelines, charting the latest controversy alongside all of the others — from plategate, the ‘coincidental’ H982 FKL registration of Clarkson’s car during last year’s Argentina shoot, to a stunt way back in 2003 when the BBC was forced to apologise to a Somerset parish council after the presenter drove a pick-up truck into a horse-chestnut tree in a village car-park.

Luck has played a large part in his career, indeed in his life, Clarkson has often claimed. Beginning with his mother creating stuffed Paddington Bears, the kitchen-table project quickly became the family business. Speaking to Desert Island Discs in 2003, Clarkson said of the operation, which was licensed by Michael Bond: “It was the start of my good fortune, which has followed me all the way through life; that they [my parents] just happened upon Paddington just as I was turning 13 […] so the school fees were able to be paid.” Tonight, no doubt, Clarkson will go to bed holding dear his little bear, thinking of his beloved mother and wondering what adventures are yet to be had.

In August last year, Director of Television Danny Cohen told the Edinburgh International Television Festival that “no-one is bigger than the BBC”. That’s all very well, but the inconvenient truth is that Clarkson is bigger than Top Gear. This is not the last we have seen of the man for whom the phrase ‘motormouth’ could well have been created.

And on that bombshell, I’m off to bed.

Jeremy Clarkson in his own words

“The actual driving was always a drag. You sat in some Godforsaken hedge, on a blind bend waiting for the walky-talky to say the road was clear. And then you set off to find it wasn’t or that the cameraman had lost focus and that you’d have to do it all over again, and again and again.”

On ‘Star in a Reasonably Priced Car’…

“When a guest comes to do [Christian O’Connell’s] show or to do Graham [Norton’s programme], you turn up, say: ‘I love everybody, isn’t everybody lovely, fluffy bunny rabbit, funny anecdote’, go home. With Top Gear, you’ve got to get there for lunch and then spend all day with a man who won’t talk to you, in a white helmet, you don’t know who he is. And it’s grey. And the food’s rubbish. And you go round and round and round trying to get a fast time, in a car with a steering wheel on the wrong side. And then a fat man with idiotic hair laughs at you for a bit and is rude to you. And then you go home, bewildered, saying to your agent: ‘Who the hell booked me on that show?’.”

On leaving the making of films to last minute…

“We’re actually in the middle of filming Programme Eight. We’ve had a year. But we’ve all been there: ‘homework’s due in, I’ve got a week to do it, I’ve got six days to do it, four days, two days, one day, IT’S IN IN THE MORNING!’. And that’s exactly where we are. It either goes out or it doesn’t. The world still turns. Nobody’s going to say: ‘Well that’s it. The end of the world: Top Gear‘s not on’.”