One is a female, 21-year-old Cambridge University student. The other is a 55-year-old man, convicted of murder and with a history of drug crime.

It would, perhaps, be reasonable to assume that they have little in common — but for a letter, sent by the Long Lartin inmate at the end of last month, after a reading that the student gave during the televised Carols from King’s service “touched [his] heart”. Seeing the student’s name appear on-screen as she spoke, he noted it down and sent an epistle addressed to the university on the hope that it would reach her. 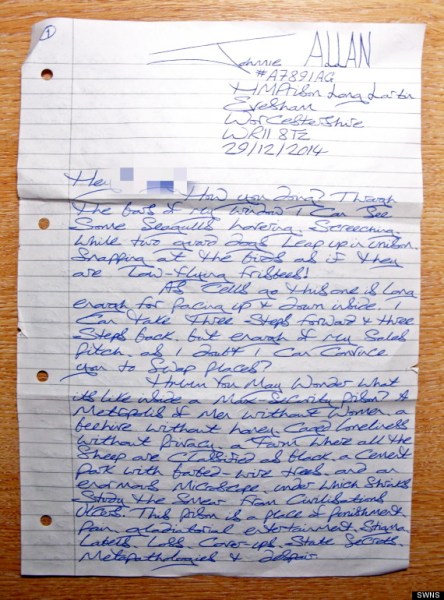 The letter was delivered to the student after the prisoner wrote her name, which had appeared on-screen during the BBC2 broadcast of Carols from King’s, and the generic University of Cambridge address on the envelope.

The Mail called said letter “chilling”. The Irish Independent described the “young student” as being “left terrified”. Student paper The Cam even reported the undergraduate as saying: “I do worry for my safety”, noting that the killer could be released as early as next year.

Me? I think it’s risible. If you actually read the letter (or certainly the bits that I’ve found online), the prisoner says nothing ‘creepy’ or sinister. In places, it’s surprisingly funny. Funnier still, though, is the apparent ignorance of the Cambridge student who, the Telegraph reports, asked: “If he’s in maximum security prison, how was he able to watch the television?”. This – after declaring her ‘astonishment’ at  the very fact “he was able to send the letter” – does not speak well of the University’s bid to break free from its elitist public perception.

How dare she seemingly believe herself to be so elevated in society that she finds “unnerving” an act of innocent communication? Who is she to “hope to never be contacted by him again”? And why, given she was subject to a “cornucopia of harassment” from several “mostly creepy guys” after appearing on television, is it this man whom she found so “extreme”?

Although the student is unnamed – she wishes herself to remain anonymous – she has freely shared the full details of the letter with the world, including the prisoner’s name, address, and identification number. I think that’s unfair. The inmate in question, Johnnie Allan, clearly felt something resonate in the words she spoke — it is worth emphasising that professing to have been moved by words of the Bible is, in this country, no crime.

I too once sent a chance letter to someone who, I felt, had unknowingly deeply affected my life. Having stumbled across what I thought was his home address, I wrote a side or two of A4 to the former Editor of Blue Peter, Richard Marson. The television programme that he had produced for nearly a decade had encouraged and inspired me throughout my childhood (indeed, it continues to do so today), and I felt it was worth a shot at contacting him to thank him, on the off-chance that he would read my rambling prose. Weeks came and went without me hearing anything in reply, but as I opened the last of the envelopes I was handed on my 17th birthday, I realised this one was different. Obviously just gathered up with the rest of my birthday post by my parents, I was overwhelmingly pleased to have received a reply from Mr Marson after all. It meant the world to me.

I am not suggesting that the anonymous student should feel obliged to reply. She is well within her right to request the Prison Service to ban any further communication being sent to her by Mr Allan. But if she was going to acknowledge it at all, she could have accepted more gracefully the prisoner’s lonely cell cry.

Here is the truth. At the Carols from King’s service held on 14 December and broadcast on Christmas Eve, a 21-year-old female undergraduate rose to deliver a reading from Luke I, 26–38. The service’s third lesson told of the Blessed Virgin Mary being visited by the Angel Gabriel, who within the space of three sentences reached the startling crux of his coming: viz., Mary was to “conceive in thy womb and bring forth a son, and shalt call him Jesus”. Quite understandably, the virgin is said to have been “troubled at his saying, and cast in her mind what manner of salutation this should be”.

It may be wrong to do so, but I can’t help drawing a parallel between Mary and the Cambridge student who read at that service. The difference is that one dealt rather better with an unexpected situation than the other.

Truly, there is weight to the words we read.

How are you doing? Through the bars of my window I can see some seagulls hovering, screeching, while two guard dogs leap up in unison. Snapping at the birds as if they are low-flying frisbees!

As cells go this one is long enough for pacing up + down inside. I can take three steps forward + three steps back. but [sic] enough of my sales pitch, as I doubt I can convince you to swap places?

Hmmm You may wonder what its [sic] like inside a max-security prison? A metropolis of men without women, a beehive without honey. Caged loneliness without privacy, a farm where all the sheep are classified as black, a cement park with barbed-wire trees, and an enormous microscope, under which shrinks study the smear from civilisations ulcers. This prison is a place of punishment, pain, gladiatorial entertainment, stigma, labels, loss, cover-ups, state secrets, metapathologies + despair.

Night-time here tends to be a crazy symphony of overlapping sounds: shouting, screaming, banging, snoring, bursts of anger + laughter, mingled with music + nightmares. I can hear some people speak in their dreams, to their family + friends who aren’t there, to Gods who they feel have ignored their prayers, to demons that torment them.

XXXXX, I’ve been incarcerated and cut off from life for the last 18½ years. Quite often watching the blank wall expecting to get nothing, counting + recounting the bricks (142 each side), even having crazy I-spy-with-my-little-eye chats with myself, because for very long periods, the only time I’ve seen another human-being has been: ‘Clang clang!’ An eight-inch square slot opening in the middle of my door, getting passed my porridge… I’ve meditated on everything I know (About things that happened years ago – small things, big things – childhood to adulthood + back again – where had I been right and where had I been wrong?) I’ve sang all the songs I can recall in whole or in part… I’ve thought about God is there one or many? And why He/She allows so much pain and injustice if He/She is a loving God? (From my perspective, languishing in prison wrongly convicted) I frequently feel like someone has used a vacuum cleaner + sucked out the best bits of me!

Anyway XXXXX, enough of my unusual introduction! I found you tweaking my imagination after seeing + hearing your beautiful reading at King’s College (Christmas Eve) which touched my heart… and trapped inside my concrete cube, I decided to send you this speculative (almost message-in-a-bottle) type letter, taking the million-to-one chance you might be interested to bounce ideas, despite the negative image associated by where I currently live. Maybe my letter could:
a) Spark off a stimulating connection
b) Make you turn my envelope into a paper aeroplane floating into your wastebin.

Why am I imprisoned? Well XXXXX its [sic] hard to paint a picture of yourself onto an already blackened canvas. I’m alleged to have organised the importation of a large amount of drugs + worse still shot someone. However the flip side reality is that after I tried to expose serious high level police corruption I actually became their prime target to silence + cover their ass… They fabricated and manipulated evidence using extreme tactics of fear, threat, promise and misinformation utilizing techniques developed during ‘PROJECT MKULTRA,’ ‘KUBARK’ and more recently ‘Persistent Adversity’ methods employed by the CIA.

I could lay in my cell and remain paralysed by the situation or I can try to […] influence my future by starting a campaign of writing to people.

What do you study? Tell me a bit about you? What makes you happy?

Right, the ball’s in your court now. Please write if the feeling takes you. Que sera sera. Over to you.