Earlier this month, Jay Brickell – my DofE comrade, classmate, and friend – turned twenty. Whilst on the phone to him, and having just wished him a very happy birthday, I expressed an insurmountable urge to go out and make a video for Online. It feels like a lifetime since I went on that Duck Tour in Windsor, and our family’s USA Road Trip film (mentioned in my August Express Check-In blog) is months off completion. Addressing my desperate desire to generate some new content, Jay suggested we visit GoApe in Bracknell – inviting along our mutual friends Alex Garrett and Oli Palmer  – to spend a couple of hours on their high-ropes course.

I’ll be honest. I’m not exactly thrilled with how this video turned out. The colour is truly terrible throughout — partly the result of using a combination of GoPro and iPhone footage (with the opening link shot on DSLR), though that ought really to all have been corrected in the edit. (It would have been, were it not for problems with Final Cut regularly freezing, requiring many a full system reboot.) My own rule-of-thumb for these Short-Cut Productions is that they should not, in general, have more than an hour’s editing on them. By contrast, this one has actually taken most of the weekend to ‘get out’; most of that time spent trying to export it. It benefits a lot from the energy of the music: the brilliant Robbie Williams and Olly Murs cover of I Wan’na Be Like You is worth watching it for alone. But I do feel that, without the stress and  of my constantly failing Mac, I’d have had more time to make a better overall film. 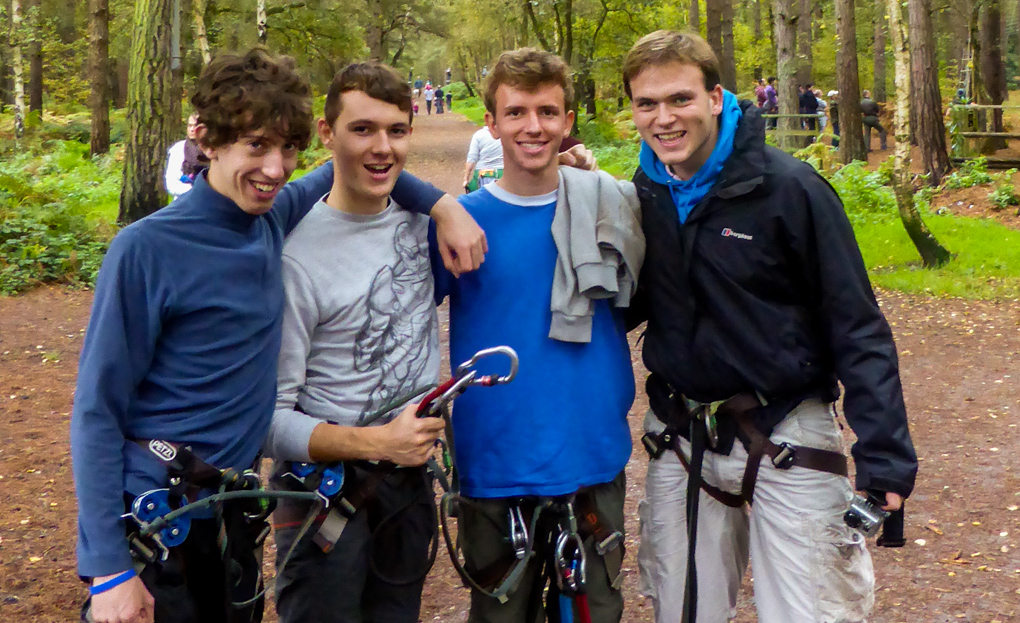 As is traditional at these such events, the four of us had a group photograph taken on completition of the course. From left: Alex Garrett, Jay Brickell, Oli Palmer, and Andrew Burdett.
[PHOTO: © Unknown 2014]