With the Bishop of Oxford due to retire in October, he’s walking the breadth of the Diocese, following the Thames Path. Andrew Burdett joined Saturday’s leg. 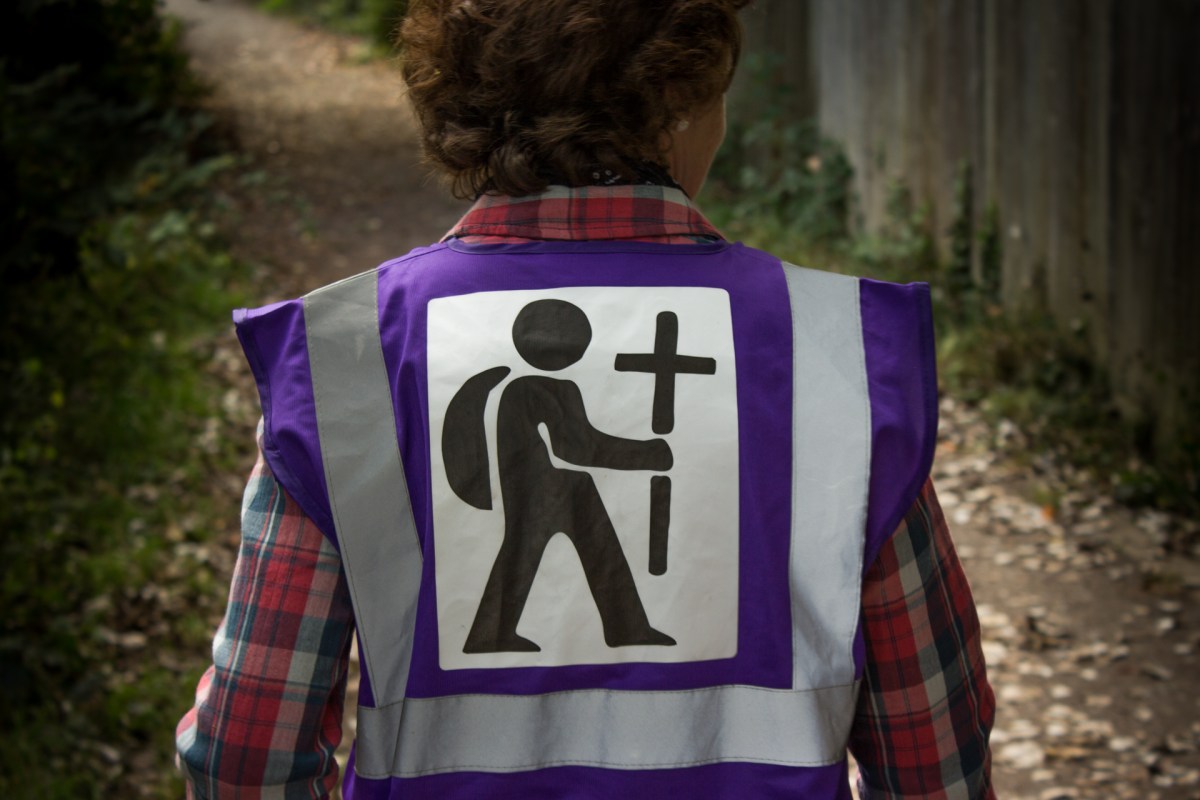 By any measure, allowing six hours to walk the eight-mile towpath from Marlow to Maidenhead was generous. Though this was a perfect cross-section of the Church of England, with almost all of the so-called ‘pilgrims’ north of 40, the projected average pace (amounting to little more than a crawl) was a woeful underestimate. Consequently, by lunchtime, the party was well ahead of schedule, fast advancing towards the day’s halt at Boulter’s Lock.

Arriving in Cookham just after 2:00pm, I knew I’d have to move quickly to get the pictures I wanted for the next InSpire magazine. I didn’t know where the walkers were, so I was pleased to see a friend approaching in the reverse direction.

He greeted me warmly. “Andrew! What are you doing here?”

I explained that I’d come to photograph the Diocese’s walk, which was being held to inaugurate the Thames Pilgrim Way. “The only problem is”, I feebly admitted, “that I have absolutely no idea as to how far the party has got.”

At this point, I was still half expecting the group to number few more than five walkers: there’d be a bishop, a vicar or two, and, I thought, a couple of Bible-bashing keen beans. Imagine my surprise, then, at Martin’s reply.

“Ah, yes, we passed them about five or ten minutes ago. There must be about fifty of them.”

I thanked him for his helpful tip-off, then started jogging to catch up with the mass. It took me a while before I finally caught sight of them all, through the trees and across the fields on the right-angle where Mill Lane joins the riverside. There they were: a line of Christians, the length of which I was really rather encouraged to see. They’d be laughing and joking, sharing stories and prayers. Very soon I’d be at the back, no doubt joining in with the chatter.

I couldn’t have been more wrong. Everyone was silent. For the towpath users who passed us, it must have been a peculiar sight. Dog-walking mums and scooter-riding youngsters, strolling couples and bantering dads. They all passed our file with some uncertainty as to the intentions of this softly, silently-moving crowd. One chap, having walked past everyone else, did stop me at the back to ask, but I was equally unsure of the cause of the piercing silence. 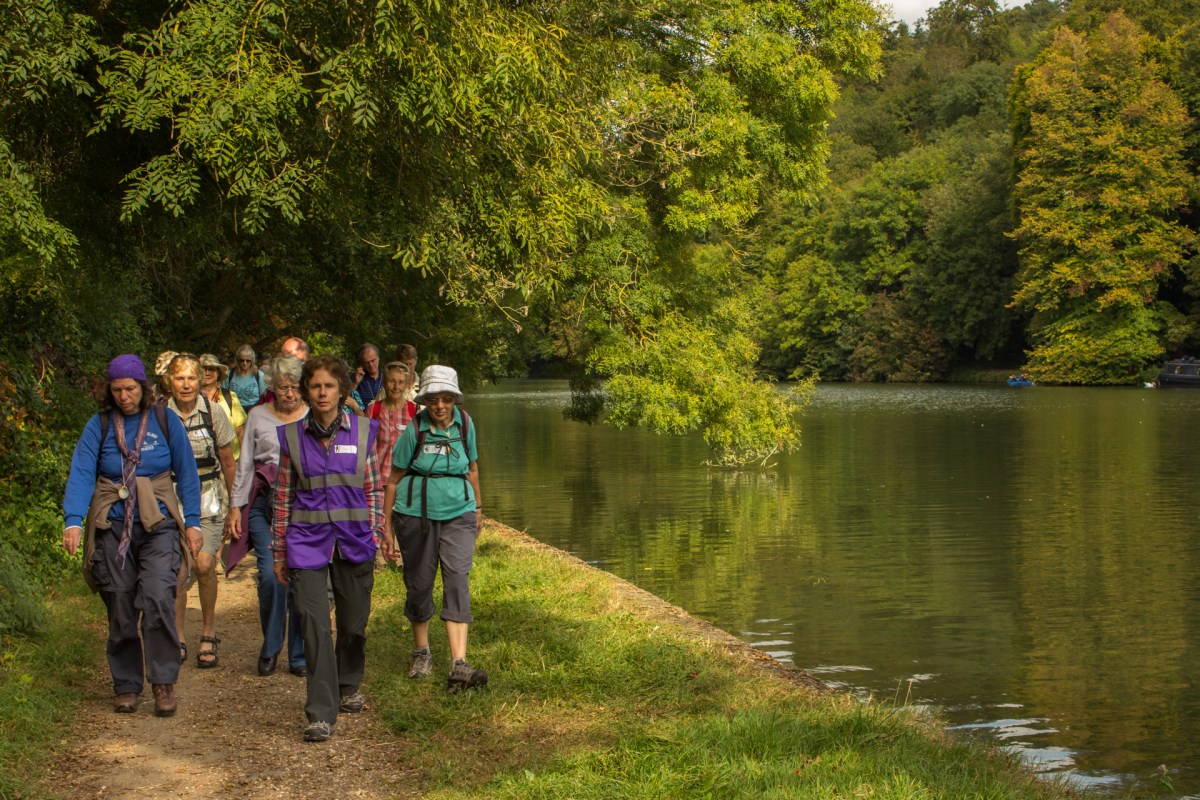 For the very last leg of the day’s journey, the pilgrims resumed their conversations.
[PHOTO: © Andrew Burdett 2014]

Finally, after twenty minutes, Bishop John rounded up us walkers at a suitable spot and, breaking the silence, led prayers. With everyone else now continuing on to the final leg of the walk, he shook my hand and apologised for the aloof welcome earlier: “Towards the end of each day, we take an hour to walk in quietude, collecting together our thoughts. It gives us time to reflect on the things we’ve seen and the conversations we’ve had throughout the walk.” 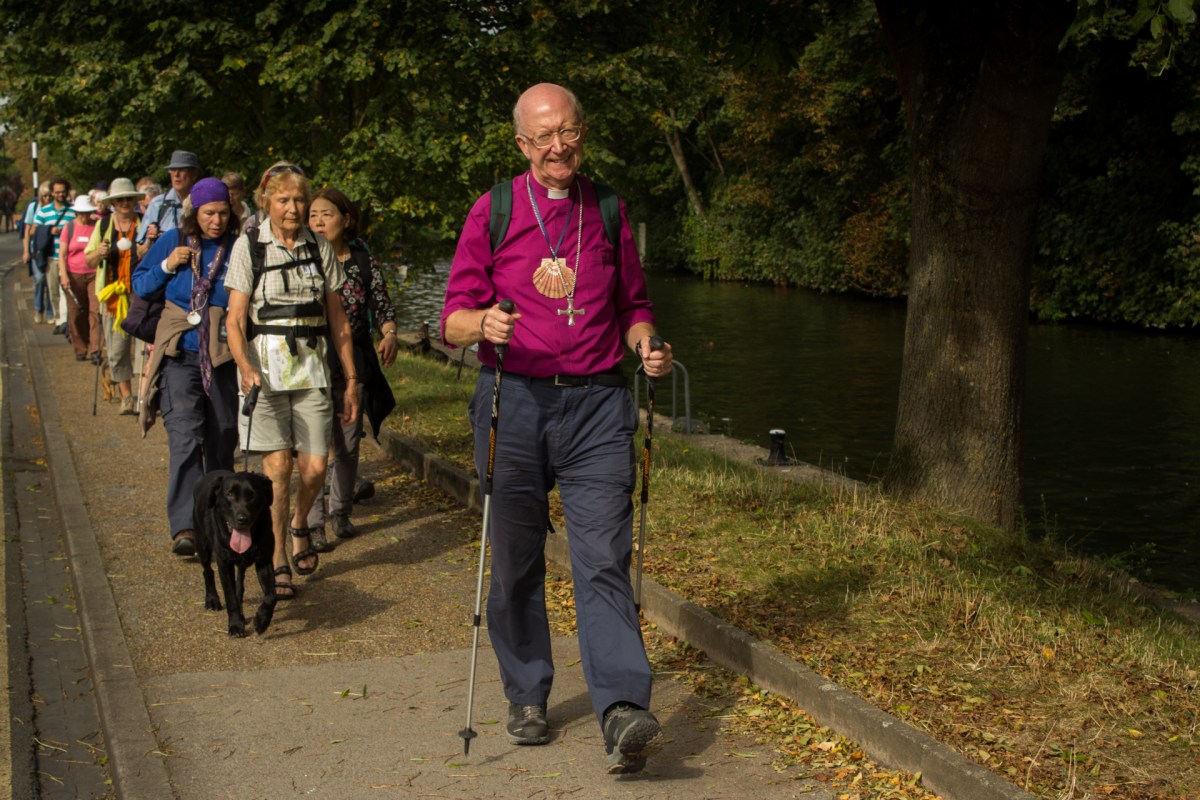 This is the penultimate day of the Pilgrimage, which concludes in Runnymede tomorrow; after ten days, and 104 miles, the Bishop’s journey through his Diocese will be complete. “You must have seen a lot of it before,” I put it to him, “but presumably never like this, in one go?”. “No, actually there’s a lot that’s new to me. Why would I have seen it when we all spend so much time driving?”, he replies. “That’s what’s made the walk so enjoyable; being out in the fresh air, seeing the glistening Thames, meeting hundreds of people… and we’ve been blessed with the weather!” True. The much-discussed ‘Indian summer’ has kept dry those who’ve participated in any aspect of the walk, whilst colouring the river-flanking foliage in delightful autumnal colours. 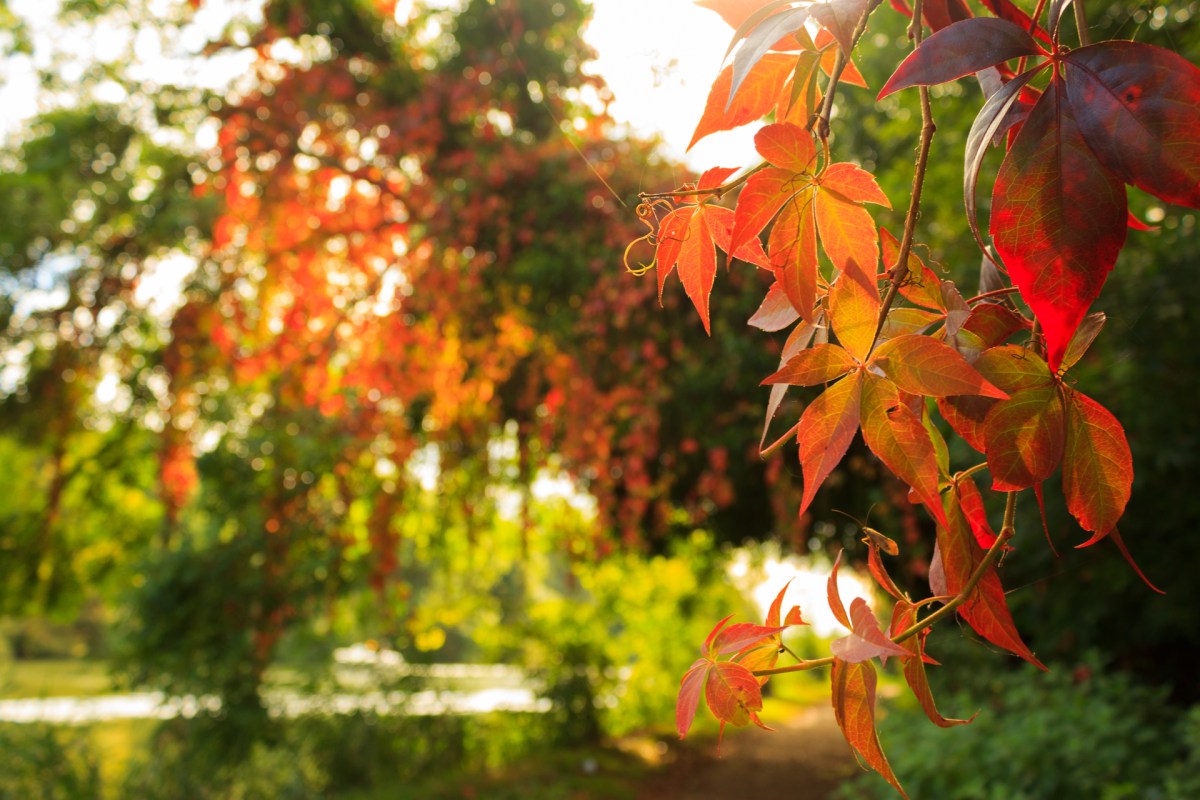 This balmy, final weekend of September was painted in an autumnal colour-scheme.
[PHOTO: © Andrew Burdett 2014]

Nearing the reception on Ray Mill Island, we were now two hours in advance of the original estimated arrival time, but members from St Luke’s (the evening’s host parish) had worked around this to ensure everything was ready. Thus, in true St Luke’s style, an elaborate tea was served to the lively pilgrims, all glad to accept a cake and cuppa. 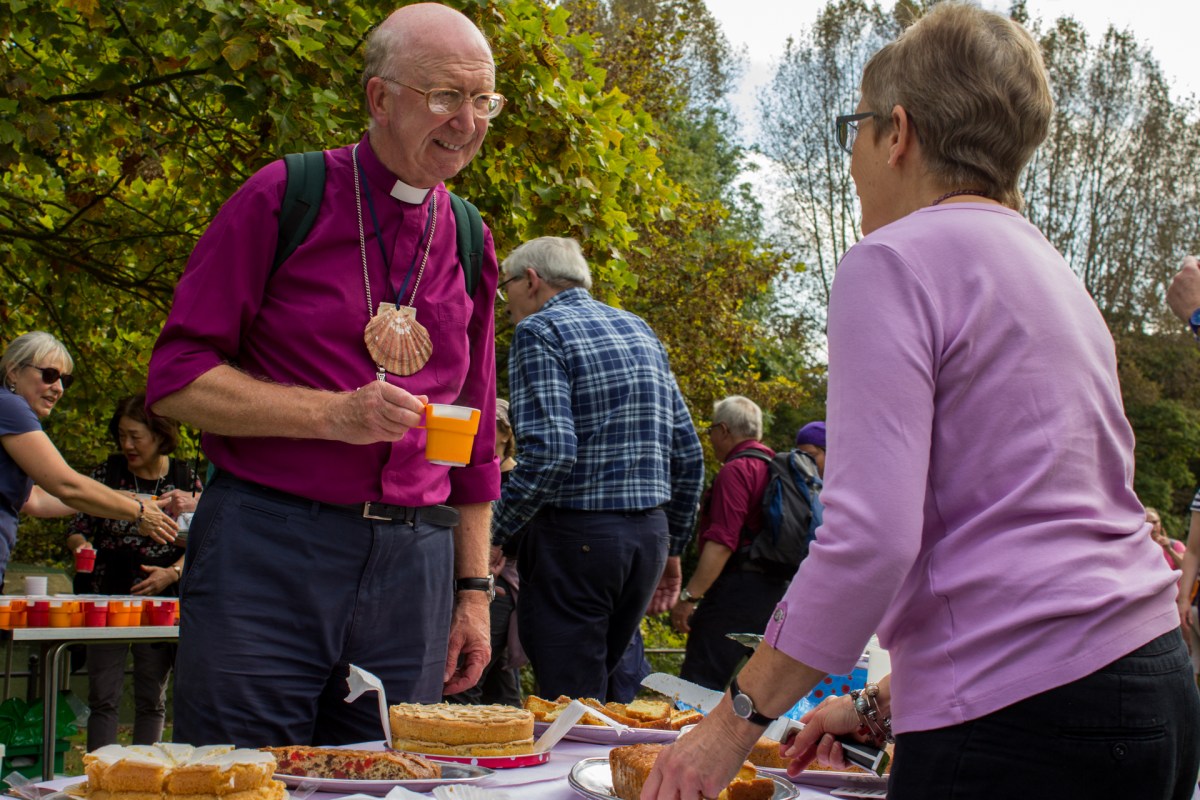 “It is in the action of travelling, of encountering the new and the unfamiliar, of sharing conversations and allowing ourselves time and space away from our everyday routines that we find refreshment and spiritual growth.” 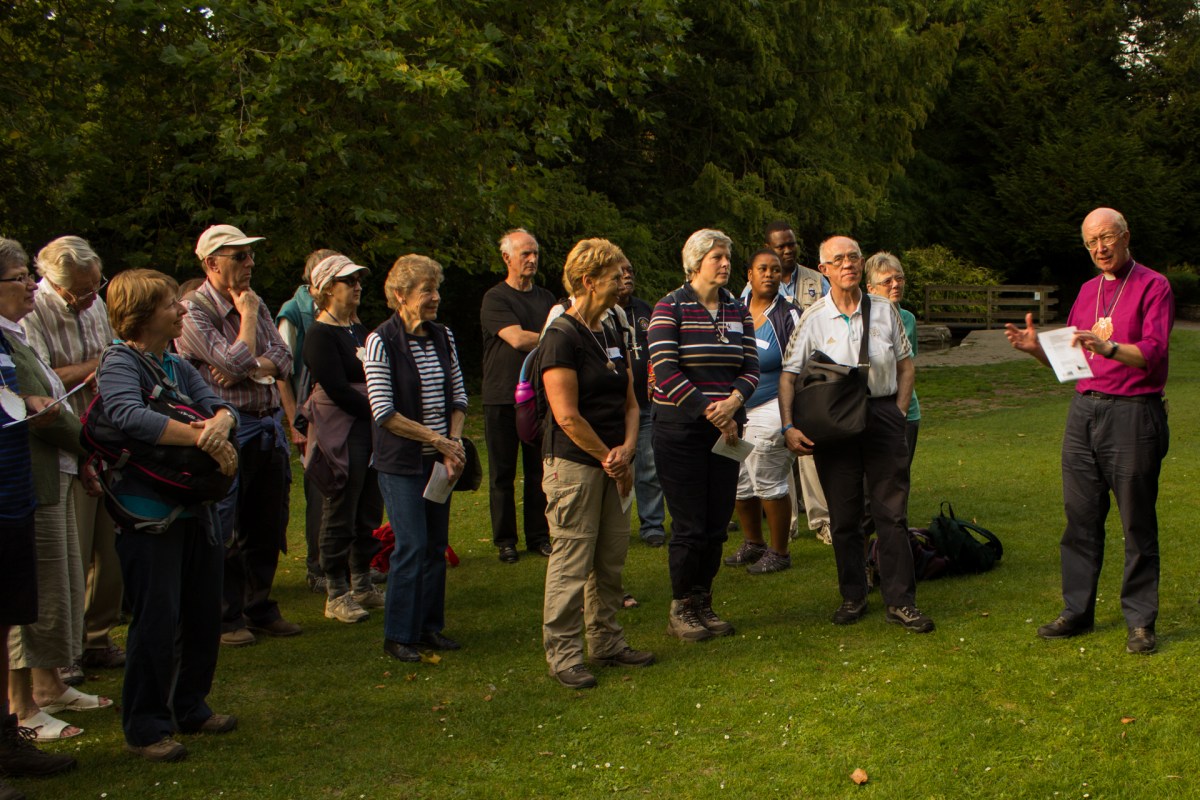 At 3:15pm, Revd Sally Lynch led a simple service with prayers, poems, and songs, during which I read from Psalm 91. As the afternoon drew to a close, all of us said the words of the grace from 2 Corinthians 13:14.

The grace of our Lord Jesus Christ, and the love of God, and the fellowship of the Holy Spirit, be with us all evermore. 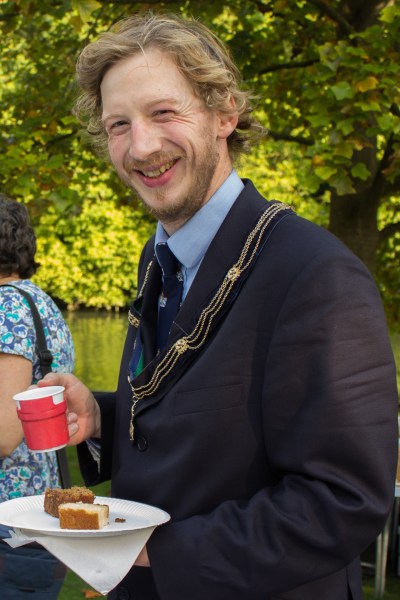 This point marked, for most, the cue to leave, but a few of us remained on the island for another half-hour or so, knowing that the Deputy Mayor, Cllr James Evans, was still due to visit. Unaware of the much-advanced schedule, he turned up at 4:00pm, just as the refreshments were originally due to be served. The parking space that had been thoughtfully reserved for the anticipated chauffeur-driven car proved unnecessary: Cllr Evans arrived instead by bicycle. Leaning his bike up against a tree, he then proceeded to reach from his backpack two chains – one to lock up his cycle, and one to hang around his neck.

The Deputy Mayor had brought with him a certificate from a “pilgrimage of my own”, which he shared with Bishop John after the latter man returned from a stroll up to the weir. Taking tea, the two men chatted for about fifteen minutes, whilst the rest of us folded away the remaining tables and chairs and took them off Ray Mill. I was pleased that Cllr Evans saw the funny side in the confusion over timings and was not obviously offended by our tidying up around him. 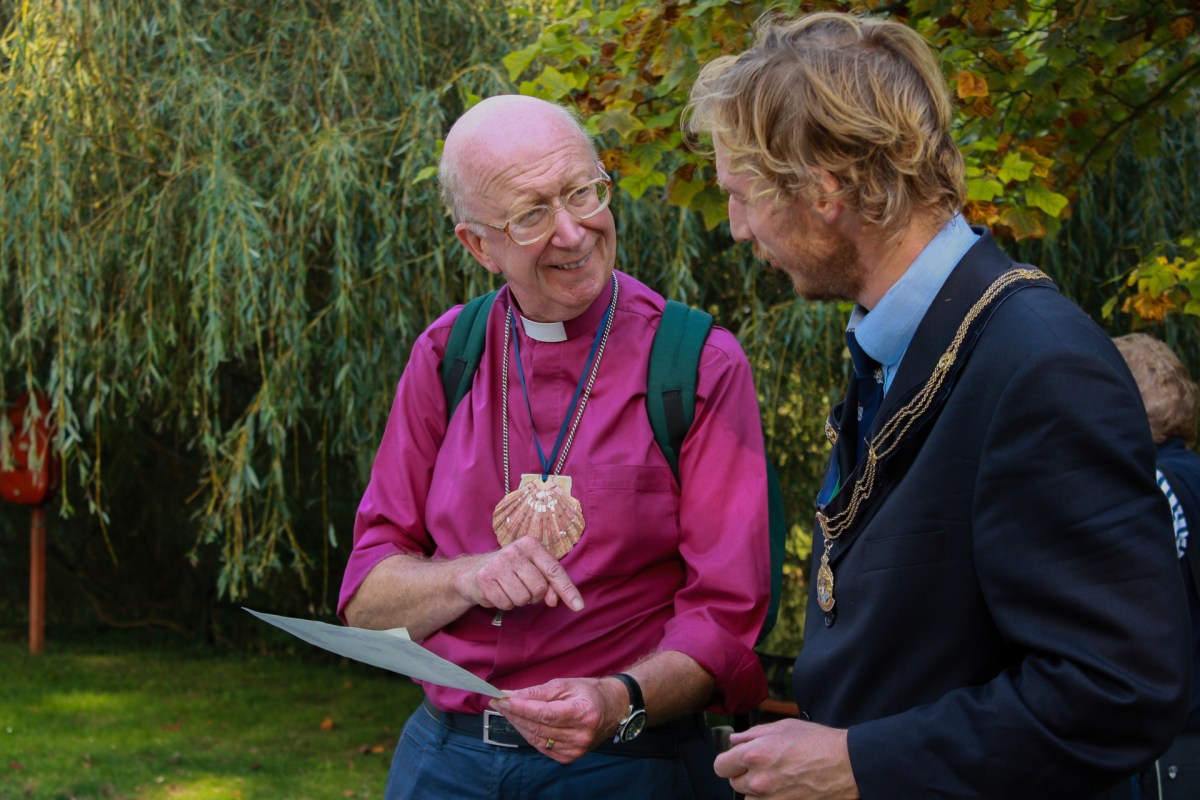 It was a splendid afternoon, with space for serenity amid much laughter and adda. 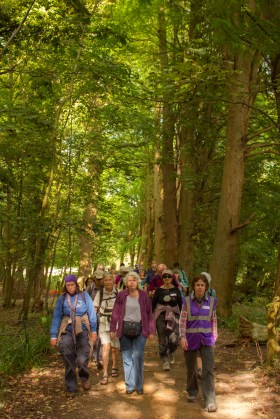 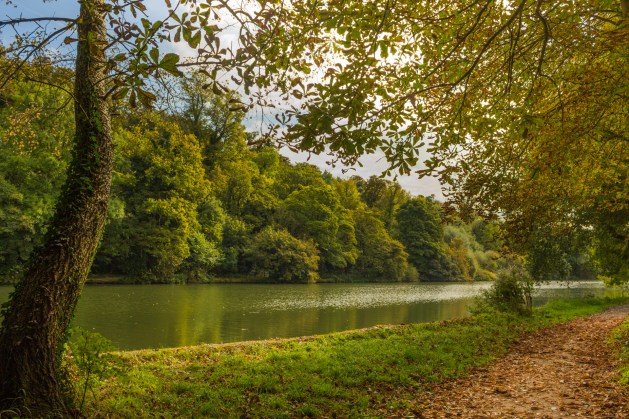 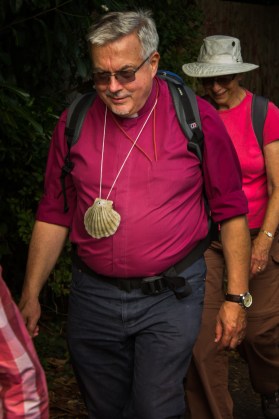 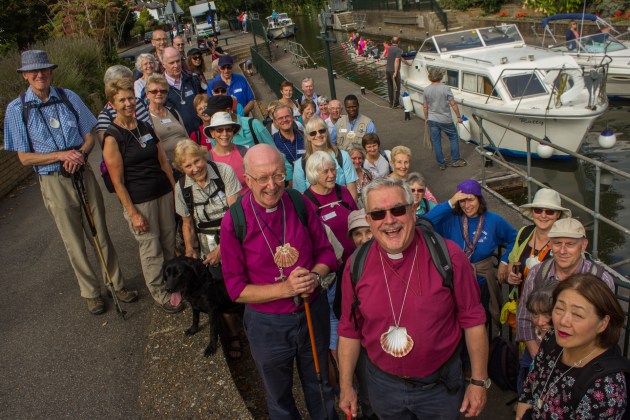 Some of the Christian walkers who’d pilgrimed with Bishops John and Andrew. [PHOTO: © Andrew Burdett 2014] 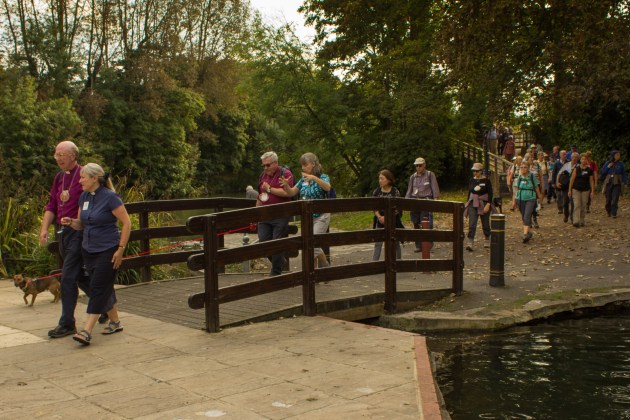 Ray Mill Island, part of the St Luke’s parish, was the last stop of the day’s walk. [PHOTO: © Andrew Burdett 2014] 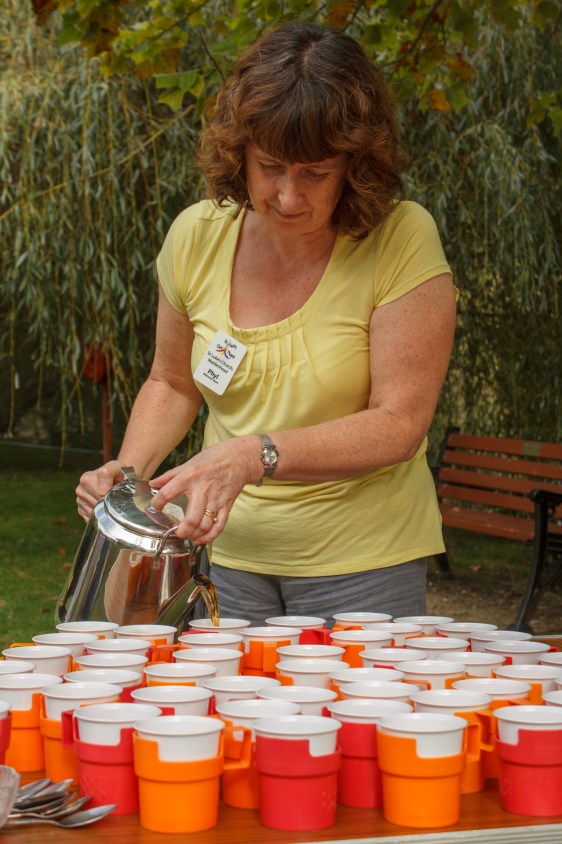 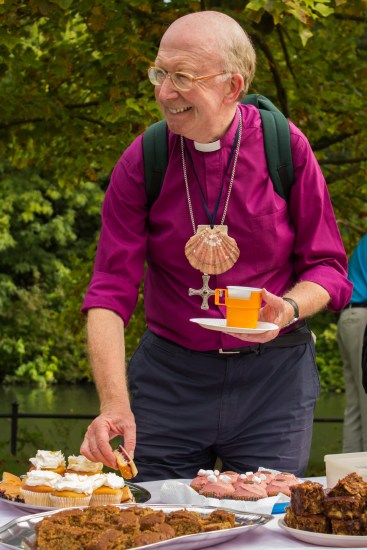 John and the walkers were treated to a trademark St Luke’s tea. [PHOTO: © Andrew Burdett 2014] 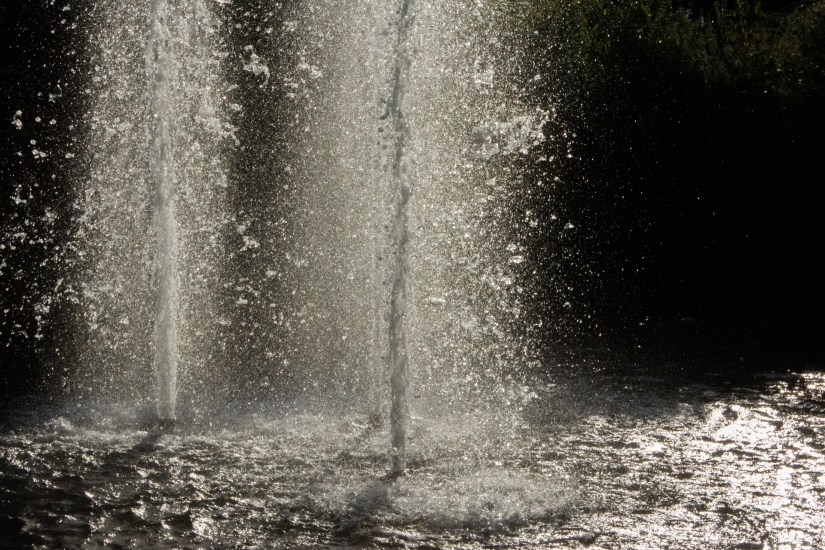