It is ten o’clock and the polling booths have closed. Scotland’s future — vociferously debated over the last eighteen months, and voted upon over the past fifteen hours — is sealed. 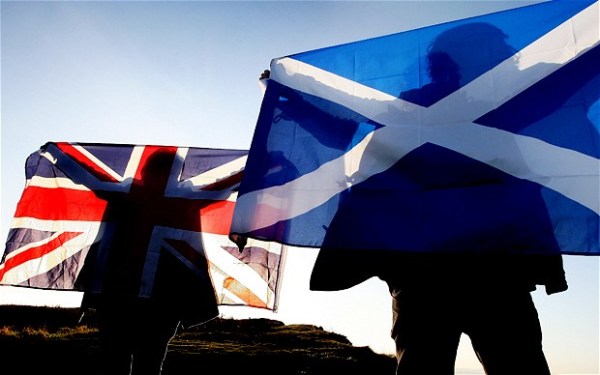 The polls have led this referendum campaign to be one of the most tense in history.
[PHOTO: PA]

Both sides have accused each other of cowardice and folly throughout — the ‘Freedom’-fighting Yes camp has repeatedly condemned the Noes for inciting “scaremongering”, whilst the spirit of Salmond’s campaign has often been judged to concentrate too much on ‘heart’ rather than ‘head’. What started with a friendly agreement in Edinburgh, signed back in October 2012, has grown and grown to the behemoth contest of these final weeks. In the process, geniality has been pushed aside by raw vehemence. To give but one example, last night graffiti appeared on the walls of a church in Lennoxtown: the intimidating message “VOTE YES OR ELSE!” greeted everyone who walked in to cast their ballot. Forget polite politics, this debate has been everything that ‘being British’ is not.

Of course, the definition of ‘British’ is about to change anyway, whatever the result of today’s referendum. Even in the largely foreseen event of Scotland voting No, the United Kingdom will be reformed. On balance, I do agree that gradually introducing a more federal system of government is probably the only realistic solution from here. Feelings of Scottish disunion have finally been exposed to the so-called ‘Westminster elite’; if the three main party leaders get their way tonight, the very least they can do — and, I think, must do — is grant more powers to Holyrood.

That, however, only goes some way to answering the problems raised by this debate. The Edinburgh Agreement was right to exclude UK voters from outside Scotland, but that has not excluded them from the wider discourse. The West Lothian question has got to be answered sooner rather than later. The Barnett formula needs to be recalculated as a matter of urgency. And this is only the start. If Britannia makes it through the night, she’s going to need revitalising to keep her going — debate around which ought to begin at first light, and must involve the whole of the UK.

For the sake of its history, culture, and world-standing, I sincerely hope that tonight’s vote will endorse the continuation of the Union. In these times, more than any other in the post-war world, it is international cooperation and understanding that we need. If we can’t show that we have that at home, how can we possibly expect it on the world stage?

Since the official campaign began, the metaphor of a marriage has been endlessly used. Decisions about governmental offices, the siting of Trident, and the fate of the BBC have jokingly been compared to the post-divorce split of a record collection. This, though, is so much more than that. It is no joke. It’s potentially the end of the greatest political union in history — and it makes me sad that, like innocent children torn between warring parents, the referendum has become so polarising on the population.

Sure, the ‘Yes’ lobby can be proud of overturning a 22-point ‘No’ lead in the space of a month, but we criticise too readily Alastair Darling’s team for the ‘negative tone’ of the No campaign. As Simon Kelner wrote last week: “They have, it has to be admitted, [had] a rather difficult job in this respect, and the clue’s in the title.”

Now, it is for the ballot boxes to decide. Every passionate politician, every outspoken opponent, every fervent voice; today, their power and influence was reduced to a single leaden cross. Let those crosses speak louder than words, and may they guide this one nation into a future that is, together, better.