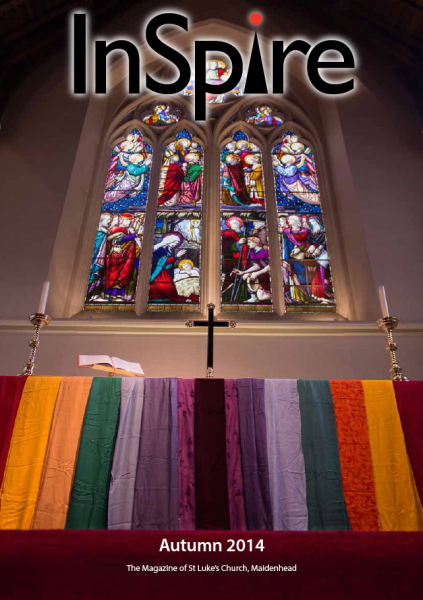 The front cover of the Autumn 2014 edition of InSpire.

Tomorrow, the latest edition of the St Luke’s Church magazine, InSpire, will hit newsstands across the, erm, church.

The publication, which I’ve edited since 2010, is always a bit of a chore to put together. I forever find it difficult to gauge an accurate, early idea as to whether I’ll have enough content to fill the twenty-odd pages. For this latest edition, I announced the deadline six weeks in advance, and yet, despite doing so, still the vast majority of material came in only in the final few days.

That all said, I am, of course, enormously grateful to the contributors to our magazine – regular writers and newer correspondents alike.

Editing the articles to enhance audience engagement always takes a fair bit of time. Often this means abridging great swathes of text in the longer contributions, but also (more subtly) requires the addition of subordinate clauses to indicate who is being referred to in first-name terms. Whilst I pick up on most typos, vicar Sally helpfully casts a second pair of proof-reading eyes over the words.

Sourcing pictures is fairly easy – in general, most of the photography comes from my Lightroom catalogue. This is nothing to do with my egotism; rather, it is because very few images (and sometimes none) are sent to the InSpire mailbox.

My informal research, though, regularly names the illustrations as a top priority for our readers – and, for that reason, I’ve thrown together a four-page picture pullout from the Isle of Wight bank-holiday weekend.

Also included is a four-page feature on the Stanley Spencer Gallery in Cookham, whose exhibition Paradise Regained fitted well with the other articles I’d received on the Great War. With still a small gap to fill, I reedited my recent blogpost about reading at a WWI commemorative service, so as to continue the theme.

Pictures taken last week at the church’s Arts Festival, Noah’s Ark, made it into this edition in the nick of time, with one filling the front cover. There’s also a great article entitled Lessons in Life and Horticulture, a beautiful poem and accompanying watercolour on Happiness, and the usual updates from St Luke’s walking groups.

Ladies and gentlemen I give you: the Autumn 2014 edition of InSpire. Thumbnails of the pages from the Autumn 2014 edition of InSpire – the St Luke’s Church Magazine.

Here’s my problem. Every Sunday morning, all of us address our “most merciful Lord”, when outside there’s a cruel and bloody war on. It’s trapping fleeing families in the Kurdish desert’s baking heat, and then, there, they’re starving to death.

Nutters are running around with the heads of those who happened to disagree with them. Worse, the brutality of it all is being live-tweeted, taking Isis to the laptops and iPhones of potential radicalists in the West. The supposedly ‘Islamic’ extremists are using the internet to spread their homocidal message, with the result being hundreds of young Western impressionables flocking to fight in the distant jihadist war.

If you live in northern Iraq right now, you have two options. Convert to a deranged version of Islam, or die. If you choose the latter, you can expect a public and humiliating execution – punishment for the apparent crime of being a Christian. “There’s a park in Mosul”, a CNN correspondent reported recently, “where they beheaded children and put their heads on a stick.” That’s only the start of it – there’s dark corners on the internet, filled with unspeakable pictures of the most horrific crimes against humanity.

What we are witnessing is medieval bloodshed with a frightening modern twist. And, to be honest, I don’t know what to do about it all.

What I do know is this. More than ever before, the nightly news is certainly making me question my faith. If God really is “almighty”, what the hell’s he doing decapitating his followers? And how, by any measure, is it “right to give thanks and praise”?

Such a stark juxtaposition between the words on the service-sheet and the words in the newspaper makes it hard to be a Christian in Britain today. But, I’ll tell you what: it’s a million times harder being a Christian in the Middle-East. Perhaps our creed should be abridged – “Christ, have mercy.”.