An exhibition at the Stanley Spencer Gallery in Cookham looks at how the artist recovered from the atrocities of World War I. I was invited to look around.

Greeting me warmly at the glass door of the Stanley Spencer Gallery, volunteer Shez Courtenay-Smith wastes no time in welcoming me in. The converted Wesleyan chapel – the very building in which Spencer worshipped as a boy – is, despite its small proportions, surprisingly commodious inside. “When we refurbished in 2006, the designs included this new mezzanine floor, which allows the space to be used more effectively. It is, now, a really lovely place to spend time.” I immediately confess that, though I have often passed the gallery, which is sited at the top of Cookham High Street, I have never before stepped inside. Nodding as I talk, it’s a line she’s heard before. “We have visitors from all over the world – from the USA and Canada, to South America and even Australia – yet many local people don’t appreciate what they have on their doorstep.” Indeed, the gallery contains the world’s the largest collection of Sir Stanley Spencer’s works, many of which are set in the surrounding area.

The gallery’s latest exhibition coincides with the centenary of the start of WWI and examines the effect the war had on the young artist. Stanley was one of five Spencer brothers, all of whom fought in the Great War; his older brother Sydney died at Epehy in September 1918, and is the only holder of the Military Cross remembered on the Cookham village war memorial. This photograph, taken at the dedication of the new Cookham War Memorial in 1919, shows the scene Spencer was later inspired to paint.
[© The Stanley Spencer Gallery]

The unveiling of that very memorial was painted by Stanley in 1922. Although the artwork is now owned by a private collector, the original canvas is currently on display at the gallery as part of its Paradise Regained exhibition. Despite the bright colours, there is a dark side to this picture. Spencer’s style had changed, just as his perfect pre-war vision of the world had been smashed by WWI.
[© Estate of Stanley Spencer]

It’s a truly striking image. Against the peaceful background – Spencer’s verdant stomping ground, unchanged since he was a lad – stands the defining new landmark which symbolises what has changed: in just a few short years, sleepy Cookham lost scores of her men.

“This is Spencer’s distinct take on the ceremony”, says Shez, adding: “Like many of Spencer’s works from the time, it avoids the pain of war. It features frivolous elements, which contrast with the grievous reality of the carved name of Spencer’s brother. It’s an image of hope.”

At first, Stanley did not actually serve on the front-line: on account of his diminutive stature (he was 5ft 1in), his mother had advised him to apply instead for ambulance duties. For the first thirteen months, he worked in the UK, volunteering with the Royal Army Medical Corps and stationed at Beaufort Hospital in Bristol. However, in May 1916 he was transferred to overseas duties and, after ten weeks’ training, was sent to Macedonia with the 68th Field Ambulance unit. It was there that he saw the worst of the war, especially after volunteering to join the Royal Berkshire [Infantry] Regiment.

“Unsurprisingly, the horrific violence of war had a huge effect on the young Spencer,” Shez explains, “so his return to Cookham was like finding refuge.” Nonetheless, he was deeply troubled when he resumed work on Swan Upping, the painting he started before enlisting. “It is not proper or sensible to expect to paint well after such experiences”, he wrote.

But paint he did, and the immediate post-war years spawned many of his finest, most revered works.

“It was his salvation, in many ways,” concludes Shez, “to refuse to dwell on the horrors that he saw.” He painted wartime images, of course, but always with a sense of looking forward.

Spencer continued painting until his death in 1959, never finishing his long-planned Christ Preaching at the Cookham Regatta. Today, it hangs at the centre of the gallery, a poignant reminder of the man who lovingly called this village his home, and who this village proudly calls its own. 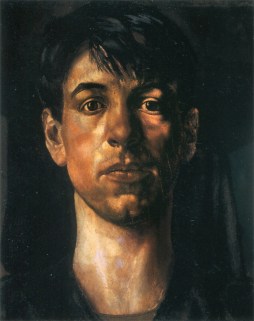 Who was Sir Stanley Spencer?

◙    Sir Stanley Spencer was born in 1891 in the family home in Cookham High Street. He quickly developed a passion for drawing, taking lessons from a local artist and, in 1907, attending the Maidenhead Technical Institute on Marlow Road – a stone’s throw from St Luke’s. A year later, he began at the Slade School of Fine Art (part of University College London), studying and taking inspiration from the techniques of the Old Masters.

Regarded as one of Britain’s greatest twentieth century painters, his works depict joyous and vivid fusions of the ordinary with the extraordinary; of the earthly with the spiritual. Those of his paintings that are set in his beloved Cookham speak of the village, the river, and the surrounding hills; commons and meadowland from a less materialistic age than ours, yet with a timeless quality, often touched by the trauma of his wartime experiences.

This post originally appeared in the Autumn 2014 edition of InSpire, the magazine of St Luke’s Church, Maidenhead, in a collaboration between it and the gallery. It was first published on AndrewBurdettOnline on 12 October 2014.
Paradise Regained runs at The Stanley Spencer Gallery until 2 November 2014. More details can be found on the gallery’s website.
Advertisement