This week I’m working on the on-site newspaper at WINGS2014, an international Guide and Scout camp being held in Windsor. Yesterday (Tuesday) I was pleased to escort Baylis Media’s Justin Longthorne around the site. He was here to take photographs of the camp for an Express series report on WINGS in Friday’s paper. Sadly, he didn’t really come at quite the right time: at the end of the first activity session, many of the Scouts were happily relaxing, making it difficult to pose up pictures of energetic, lively kids. Nonetheless, he just about got what he wanted, and, after half an hour or so, headed off. 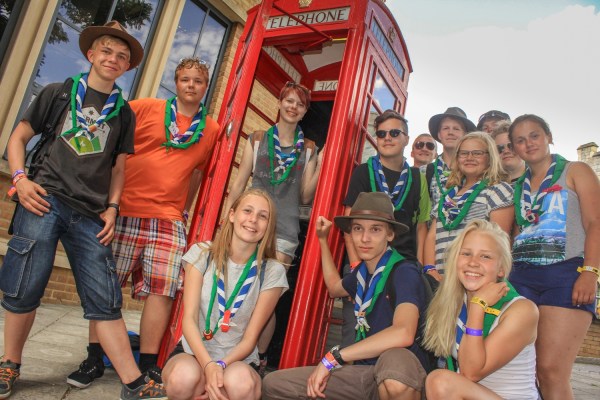 Heading out of the WINGS campsite and on to the treelined Long Walk, the sight of Windsor Castle instantly impresses the eight Scouts I’m walking with. Selina, from Jyväskylä (the largest city in central Finland), exclaims: “It’s so beautiful! It’s such a wonderful building, in such a pretty location.” Her unit has already spent time in the UK, having arrived here last week and stayed in Weybridge, but this, the 16-year-old says, is the pinnacle. “The weather is lovely too!”, she remarks, in the great British tradition.

Not all of her 58-strong contingent are visiting Windsor for the first time. “I have been here once before,” says Roope, “but I was very small – maybe five or six, only.” I ask what he remembers of the town. “Very little”, comes the 15-year-old’s reply, before a signpost at the road suddenly jogs his memory. “LEGOLAND!”, he reads in reminiscent rapture.

We cross over and continue towards the Castle, the Scouts pausing every few footsteps to take photographs on the ancient straight. We go as far as we can before reaching the palace’s security gates, then leave the Long Walk and head on to Park Street in Windsor town centre. “It’s very English;” comments 16-year-old Olli, “all the bricks, all of a sudden… and the red telephone box!”. This arouses surprisingly great excitement among the Finns, who take it in turns to be photographed inside the British icon. “That’s just plain awesome”, Eliel, 15, says. 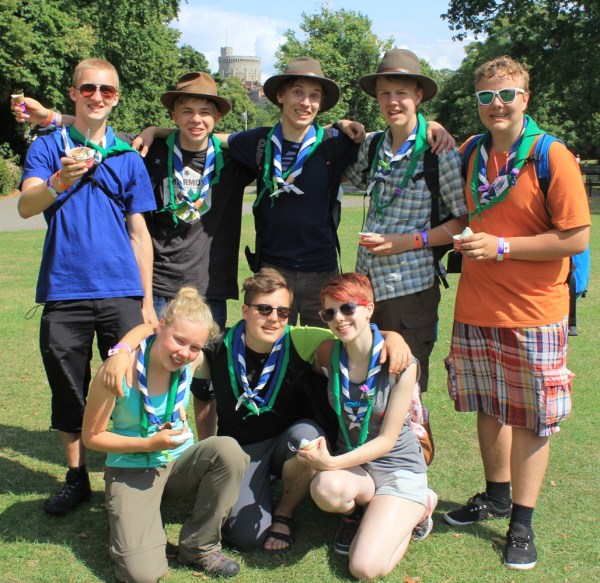 I lead the group down to the riverside, where we each buy ice-creams. Though most of the group opt for lollies, Olli was left disappointed when he didn’t get the flavour of his choice: “I shall not rest until I’ve had my Eton Mess cone!”, Olli declares, eventually settling for his third-choice after double-chocolate proves to be out-of-stock too. 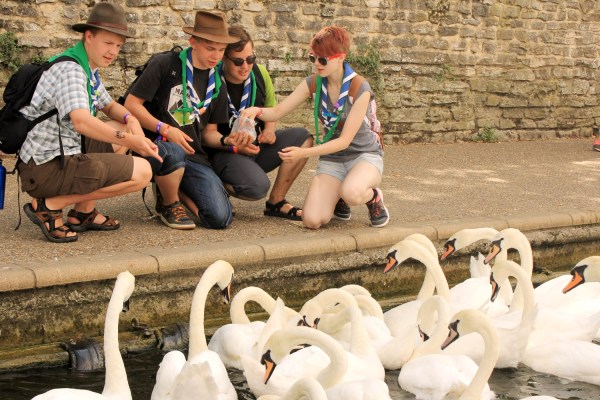 Visa, 16, buys a bag of duck-feed, which he shares out amongst his peers. “I’ve never seen so many swans in one place”, says Selina, as she helps distribute the pellets among the hungry cygnine mouths. We walk up the High Street, where the Finnish Scouts are warmly welcomed into the Windsor Fudge Kitchen. As they’re given a fudge-making demonstration by chef Sam, the shop’s frontman, Matthew, tells me how positive WINGS2014 appears to be. “There’s neckerchiefs everywhere” he says with reference to the Hike It! activity, which every day sends hundreds of WINGS participants into Windsor. “All the Guides and Scouts are giving off such an amazing energy. I’m quite gutted not to be involved, actually.” 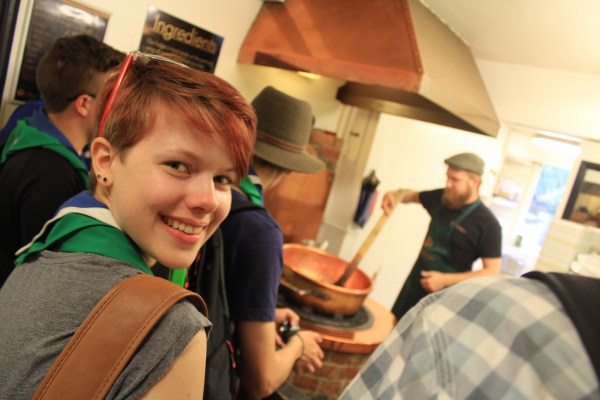 Selina smiles as a fudge-making demonstration is given.
[PHOTO: © Andrew Burdett 2014] 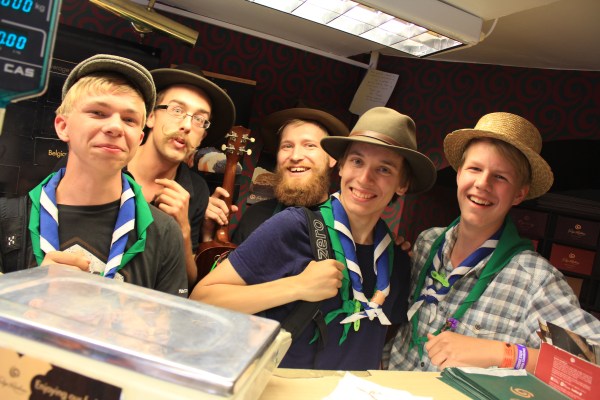 After a great afternoon exploring, there’s just time to write and send a postcard home to Jyväskylä before it’s time to head back to the campsite. Most of the Finns vow to one day return to Windsor, with many wishing to tour the world-famous Castle – and, of course, to sample the Eton Mess ice-cream.

Message In A Bottle

Leaders at the Exploration sub camp are organising a Message In A Bottle activity, offering WINGS2014 participants the opportunity to contact fellow Guides and Scouts from across the site.

A mock-up WINGS water bottle (made at 6:00pm yesterday afternoon) with a message enclosed, for the Daily Brew newspaper.
[PHOTO: © Andrew Burdett 2014]

Jen, Exploration programme director, said that the idea “provided a novel way for young people to meet others and contact each other”. She added: “One of the aims of WINGS is for participants to make new friends from units across the country, and indeed the world. By enabling messages to be exchanged in this totally accessible way, all children have the chance to strike up conversations.”

To take part, clean and dry a plastic bottle and remove the lid. Using the pens and paper provided, write your name; group, area, and county; contact address; and message, and post it into the bottle. You can then hand it in to the sub camp headquarters, who, if you state your Guiding or Scouting section, can exchange it with someone of a similar age.

Scouts from 5th Newport were positive about the scheme. 15-year-old Freya thought it sounded “like a great idea”, and that she’d “definitely like to get involved with that”. George, 14, said that he’d write to tell of how he’d “made loads of new friends at WINGS, including some cool guys from Denmark camping nearby”.

It’s A Dog’s Life for Odi

Meet Odi, who’s come to WINGS with a special job to do. The nine-year-old golden Labrador is a hearing dog, who lives with – and is looked after by – Henri, 16, of 1st Hedgerley Scout Group. 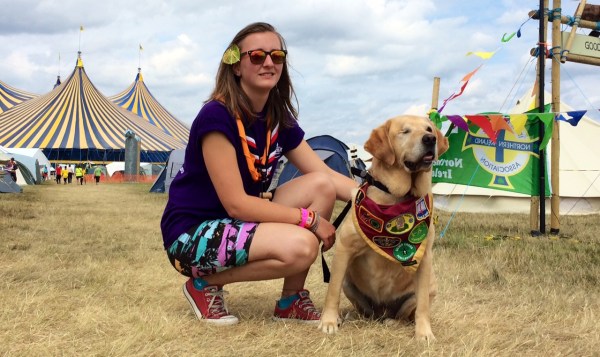 The pair are in the shortlist for a Partnership award by the Hearing Dogs organisation, having been in Henri’s care for seven years. The Scout quotes Mark Twain: “Kindness is a language which the deaf can hear and the blind can see.” The line is especially apt, as eighteen months ago Odi lost her right eye after a bout of glaucoma, a condition in which pressure builds up behind the eye. “Now,” Henri says,” she borrows my eyes, and I borrow her ears.”