This week I’m working on the on-site newspaper at WINGS2014, an international Guide and Scout camp being held in Windsor.

Yesterday (Monday) was very enjoyable, and gave me the opportunity to take some photographs around site for the first time of the camp. My report on Fling It! appears in today’s Brew, pointed from the front cover’s cheeky puff: “Fling with Friends”.

Tomorrow we’ll be welcoming a further 1,000 people to our home here in Windsor Great Park, for Wings on Wednesday (WoW). The vast majority of these are Cubs and Brownies – young people who, at the time of the next WINGS, will be old enough to attend as full participants. Wednesday’s paper will have an increased print-run and will be twice the thickness of the other editions, to offer the youngsters a souvenir of their day whilst providing all the usual great content for everyone else on site.

In readiness, I spent the afternoon yesterday with Scouts from a Finnish troop, who were doing the Hike It! activity. This gives participants the opportunity to head on into Windsor town centre to explore. The idea is that, by running my report on Hike It! in tomorrow’s paper, we can have a ‘Windsor Welcomes Wings’-themed report when the Cubs arrive, without repeating any previous content.

Issue 4 of @WINGS2014‘s favourite (read: only) on-site newspaper has been delivered by the #TheDailyBrew elves. pic.twitter.com/H9RvyGiJPU

Until then, my modest contributions to today’s (Tuesday’s) paper follow.

All the Fun of the Fling It! Fair The first thing that greets you, on stepping in to the Fling It! zone, is the breadth of activity on offer. Scouts are on stilts, Guides are on go-karts, and even the leaders are getting involved.

Circus activities are being provided by i.CIRCUS, a team of adults from across the country, all of whom are active members of Scouting and Guiding. “We’re not here to show off,” says Doody, the group’s leader, “we’re here to teach. Young people love our workshops because they can pick up a new skill and take it forwards.”

Fellow i.CIRCUS member Paul, whose nickname is QM, adds: “Yesterday, we had a ten-year-old who suffers from tics, but while he was juggling the diablo he was completely relaxed. It was wonderful to see.” Pointing to the corners of his mouth, QM notes: “He had a big, beaming smile from here to here.”

Behind Paul as he speaks, a youngster is spreading his weight over a teeterboard, which is little more than a wooden plank balanced on a small rubber ball. Suddenly, he loses his balance, the plank beneath him flies off, and he falls down to the floor. “I’m fine!”, says 11-year-old Harry, of 101st Odiham Scout Group in Hampshire, as he picks himself up and tries again. Asked what he thinks of this Fling It! activity, his new friend, 1st Trentside Scout Alex, 12, says the “standing see-saw is brilliant fun, but really hard to stay on”. 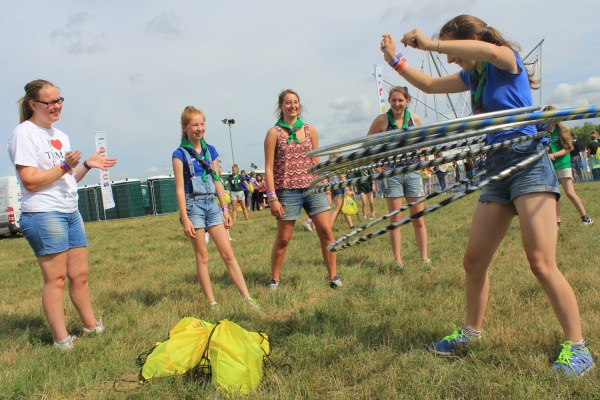 Elsewhere within the area, Guides from East Lothian enjoy the hula-hooping. Emma is wiggling with five hoops simultaneously, with more being thrown on all the time by her friends. Molly, 14, is less confident than her peers: “This is going to end badly”, she chuckles, as she attempts a modest two hoops. The Guides arrived at WINGS on Saturday afternoon, after a nine-hour coach journey. “We had to get up at 5am!”, cries 17-year-old Mairi, “But it was definitely worth it. WINGS is amazing!”. They’ve made friends with their campsite neighbours, a Norway Scout group, who’ve shared a game of football with the Guides. Katie explains: “They speak amazingly good English, but we’ve learnt some Norwegian phrases too. It’s incredible to be at a truly international camp.” At the back of the zone, a go karting track is on offer. Scouts from 8th Rushden were quick to head to the unpowered vehicles, and assemble on the start-line to begin a race. Harvey takes an early lead, grinning as he overtakes his fellow troop members. Quickly they fall far behind, and Harvey crosses the finish-line in spectacular fashion. Arms stretched in the air, he’s through to the next round of their informal Grand Prix. His delight is plain to see.

The 11-year-old says that Fling It! is “easily my favourite” zone of WINGS2014 so far. “I love the number of different activities that there are to do here.” Already he’s eyeing up the 10 foot trampolines and the bouncy slide, and looks as if he can’t wait to try them out – but, naturally, only once he’s had a chance to claim his go-kart glory.

This is my first ever WINGS camp this year,
And I’m grinning from right to left ear.
I’ve met loads of new folks:
Girl Guides and Scouting type blokes.
And made friends from afar and near!