This week I’m working on the on-site newspaper at WINGS2014, an international Guide and Scout camp being held in Windsor.

Yesterday (Sunday) was the first full day I spent here, having returned home from holiday last night, just in time for the opening ceremony. It’s been great to see the campsite so lively: always busy, with so much varied activity around every corner.

Issue 3 of #TheDailyBrew — the first one I’ve worked on — has now been delivered around the whole @WINGS2014 site. pic.twitter.com/iraZprDIzJ

Rock This Way to WINGS’s Hottest Night Out

WINGS2014 is providing a platform for fresh DJ talent to take to the decks, as well as welcoming established acts to its nightly rave scene.

This evening, 17-year-old Sam “Shuffla” Brice will play an hour-long set at The Club, opening with dance favourite The Vortex by grime band Hadouken!. Already this summer, he’s deejayed at birthday parties and school leavers’ discos, but he says that the 350-strong crowd expected tonight will be his biggest audience yet. “It’s all been a warm-up to this,” the Wokingham Explorer declares with a palpable sense of excitement.

“My mum bought me some decks for Christmas in 2011,” he recalls, adding: “I don’t think the family saw me again until late on Boxing Day!”. The bedroom-DJ enjoys remixing popular tracks to see “which songs work well together”, and has been honing his talent for the last couple of years. Asked what he was most looking forward to at The Club, he said it was the “buzzing atmosphere” which makes the venue a hotspot for participants.

In what is surely WINGS’s hottest attraction, the i.CIRCUS team will be giving fire performances all night, every night – and the team are offering Scouts and Guides the opportunity to learn a stunt too. Participants can be given one-to-one tuition to juggle fire, learn the basics of fire poi, or try their hand at fire staff. Anyone wishing to join in must come with their hair tied up, for obvious safety reasons, but no prior experience is needed.

To find The Club, look for the floodlit marquee next to the Fling It! zone. Josh, 16, is a Young Leader from Blackpool, and is working behind-the-scenes on the lighting. With James Noakes, Head of The Club, he’s devised a system that will illuminate the white tent in the WINGS colours.

The Club opens at 7:30pm and features two DJs a night, playing until 10pm.

How Long’s Your Welly Wang?

It is a peculiarly British activity. Select a Wellington boot, hurl it as great a distance as possible, and measure the length of your throw against your peers.

Here with her Chicago Scout group, Rachel, 14, limbers up at 1st Wellington Scout Groups’s base. “I’ve seen so many people doing strategic throws. I’m just going to lob it.” On her first go, she gets a respectable 11.5m. Friends Abigail, 15, and Amanda, 16, fare slightly better. After a second go, Rachel regains her lead, and comes out on top with a triumphant 17m. 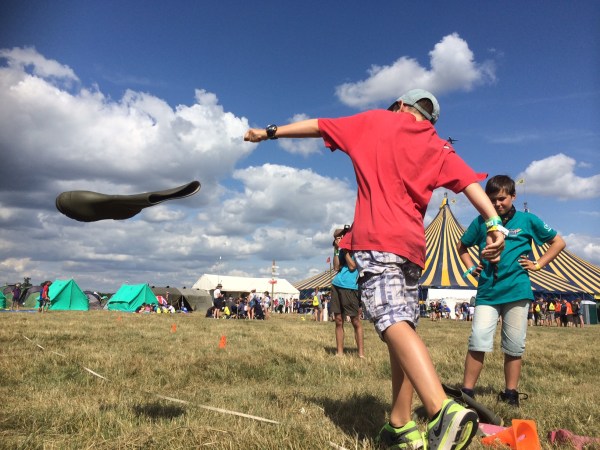 Amid the Disquiet, Pause to Reflect

Guides and Scouts across the WINGS site will join together today to mark the hundredth anniversary of the start of World War I.

A minute’s silence will be observed this evening, exactly a hundred years after the outbreak of the First World War, as participants pause to reflect on various conflicts over the last century. At the start of the evening’s entertainment tonight, the site will fall completely quiet with only the sound of the breeze and any aircraft passing overhead still audible. WINGS Radio are also supporting the initiative, with the station planning to go silent for the only time in the whole camp.

Our commemoration ties in to a national act of remembrance, entitled Lights Out and organised by the Royal British Legion. Brendan Booth, WINGS2014 Director, said that the silence will join all attendees, regardless of their home countries, in unity.

“Here at WINGS, we have Scouts from over 40 nations all camping together in one field. Young people have the amazing ability to talk to one another, in peace and without prejudice, in spite of any political situations back home.”