Tonight, at the Berkshire Scouts’ county Celebration Evening, I gave a short speech about receiving my Queen’s Scout Award, my experiences within Scouting so far, and what I think matters about the Vision for 2018.

“Without Scouts, I would not have done the things I’ve done, been to the places I’ve been, or met the people I’ve met.”

That line, with which I concluded my application letter to join the Berkshire Contingent for the 2011 World Scout Jamboree, keeps coming to mind. I read it at a ‘report-back’ event, soon after our return from Sweden. I repeated it during the County Celebration Evening a couple of years ago. And, tonight, I say it once more:

Without this great, marvellous organisation, “I would not have done the things I’ve done, been to the places I’ve been, or met the people I’ve met.”

In April, fresh from Hamish presenting me with my Queen’s Scout Award, I was thrilled to participate in the annual national parade at Windsor Castle. Now, I say this only for the benefit of those in the room without a Scouting background and very much at risk of sounding immodest, but the Queen’s Scout Award is the highest accolade a young person can achieve in the organisation. It does not, I hasten to add, make me, by any means, the archetypal Scout.

My uniform was never the best in my troop – I far prefer donning a practical T-shirt and comfortable IScout hoodie, than attempting to do activities in itchy shirts and tighty-belted trousers. I didn’t find out that ‘dyb dyb dyb’ was an acronym – let alone what that acronym stood for – until a moment of curiosity at some point last year. And, since the earliest days of my membership, successive leaders have endlessly bemoaned how utterly hopeless I am with knots.

For all of these reasons, four years ago I was certain that the Jamboree selection weekend, whilst a fun and enjoyable camp, was only that. Surely, I’d never actually get a place in the county’s contingent.

And yet, somehow I did. Someone took a chance on me, and for that – whoever they were – I’m very grateful. I really do think it marked a turning-point for me.

At that age – what? Forteen, fifteen, something like that – it’s too easy for Scouting to start seeming ‘uncool’. It’s no surprise that, whilst membership in the younger sections is growing at an amazing rate, still participation in the adolescent age-range is lower.

And that’s not because the activities stop being exciting. It’s because too many young people stop seeing Scouts as being relevant to them.

When, in May, the Scout Association’s plan for the next four years was revealed, I was delighted to see ‘relevance’ identified as a real target for 2018. As a member of both the Scouts and of the Church of England, I’m all too familar with unabashedly branded, unapologetically elaborate ‘Visions’. But behind the gloss, that’s a real deal. 70 per cent of the public “will see us as relevant to modern society” in four years’ time.

Berkshire is already doing amazing things with its Scouts and the wider community – just yesterday, we were involved in the multi-faith WWI service; there’s the great work going on with Project Africa; not to mention countless charity efforts. So, in this county, it’s more a case of becoming ‘even more relevant’ to the public by 2018.

It starts with the youngest Beaver. In that first Scout-hut ‘Sleepover’, youngsters are inspired to go on to weekend-long Cub Camps. There, they dream of Scout camps much further from home, and Explorer expeditions where they take on more responsibility for looking after themselves and their mates.

Experiences like these, over the years, have certainly ‘shaped’ me.

And that’s what’s great about the Queen’s Scout Award: it brings all these shaping experiences together.

That parade back in April was the last day of my childhood – I turned 18 the next day. At that point, naturally my thoughts turned to my ‘formulating’ years. Unsurprisingly, it was the Scout Association which I realised had provided me the richest range of opportunties.

I’m still hopeless at tying knots, but somehow that seems unimportant. I’m sure others in future generations will be able to say like I can today:

“Without Scouts I would not have done the things I’ve done, been to the places I’ve been, or met the people I’ve met”.

Wayne Bullpit, the UK Chief Commissioner, was among the attendees at this evening’s event. While visiting British units at the 2011 World Scout Jamboree, it was he who reportedly joked that he does “a job-share with [Chief Scout] Bear Grylls. I do three days a week; Bear does two days”, pausing for comic effect, before adding, “a year.” 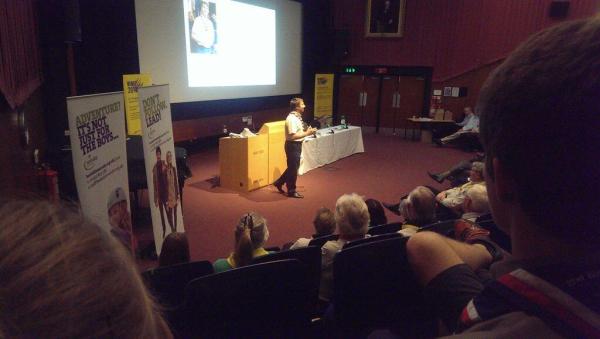 Wayne was on top-form tonight and, with the formal AGM business out of the way early on, there was a pleasant and lively vibe to this latter part of the evening. County Commissioner Hamish Stout, who over coffee last week had invited me to speak today, is this year leaving his role. It was therefore good to reflect on the progress made by the County under his ten-year leadership — an impressive selection of graphs plotted progress in terms of district population reach; numbers of colonies, packs, and troops; and the availability of Scout Huts in weekly use.

Highlights of the presentation included a video made recently by local Explorers who’d gone caving, and a wonderful TED talk by a Danish Scout leader.

Although I arrived too late to browse the array of displays put on by the Scouts, it was good to briefly catch up with several of my friends from County. With only a month to go until WINGS 2014 (an international camp, held in the grounds of Windsor Great Park), excitement is mounting as final preparations are underway.