I was honoured to be asked, as a recent Queen’s Scout Award recipient, to read at a service held this afternoon to commemorate the start of the First World War.

Although the outbreak of the Great War was not until August 1914, it was decided to hold the memorial service this month (July), so as to enable as many young people to attend as possible. This morning, the service’s key organiser, Brigadier Michael Aris, spoke to BBC Radio Berkshire’s about the event, and made (an indirect) mention of my contribution towards it.

The 400-strong congregation, which left only standing-room at the packed Reading Minster, included Scouts and Guides, members of the armed forces, and distinguished guests. I was impressed to see Theresa May, Maidenhead MP and UK Home Secretary, joining various local mayors in attending.

My reading, Rupert Brooke’s beautiful verse The Soldier, was one of two World War I poems recited in the hour-long commemoration; the other was In Flanders Fields by John McCrae, read by Caroline Dunning, a Queen’s Guide. 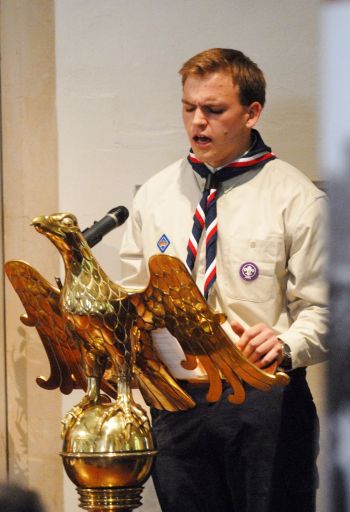 Andrew reading The Soldier by Rupert Brooke, at the multi-faith service marking the start of the Great War.
[PHOTO: Reading Post]

​​​If I should die, think only this of me:
That there’s some corner of a foreign field
​​​That is forever England.
There shall be in that rich earth a richer dust ​​​​concealed;
A dust whom England bore, shaped, made aware,
​​​Gave, once, her flowers to love, her ways to roam,
A body of England’s, breathing English air,
Washed by the rivers, blest by the suns of home.

And think, this heart, all evil shed away,
​​​A pulse in the eternal mind, no less
Gives somewhere back the thoughts by England ​​​given;
Her sights and sounds; dreams happy as her day;
And laughter, learnt of friends; and gentleness,
​​​In hearts at peace, under an English heaven.

— ‘The Soldier’ by Rupert Brooke, who fought and served with the Naval Division and died at Gallipoli in 1915.

At the service’s climax, just before the two minutes’ silence, the Hon Sir Thomas Boyd-Carpenter, President of the Royal British Legion in Berkshire, said those immortal words by R Binyon (1869 to 1943):

They shall grow not old, as we that are left grow old:
Age shall not weary them, nor the years condemn.
At the going down of the sun and in the morning
We will remember them.

It was a real privilege to participate in today’s event but, more than that, it was enormously humbling. That I can live to experience England’s “sights and sounds; dreams happy as her day” fills me with delight. In a traditional place of worship, this multi-faith, all-inclusive service was a proud celebration of freedom itself. I am thrilled to have been a part of it.