In this, the tenth anniversary concert of Taplow Choirs, there were all of the organisation’s traditions. As usual, a broad programme carried an eclectic range of music, from sacred to spiritual. A possibly slightly ill-rehearsed dance, to a lively African number, nonetheless attracted huge applause. And, as ever, parents fanned themselves madly; a vain attempt to relieve themselves of the insane heat.

Backstage just before the concert, there was a definite ‘school reunion’ atmosphere, as past members chatted cheerily with their peers. Many of them had returned to sing in a one-off Alumni choir, who achieved astonishing results with only an afternoon’s rehearsal. One singer in that ensemble, a former contemporary of mine, told me that he had never previously sung any of their three pieces; it speaks volumes that, but for this private admission, one would never have known. Collectively, they sounded incredible.

They were not the only one-off group. For one night only, a number of Taplow’s adult friends had rehearsed four-part favourites to sing in a Parents’ Choir. I think that Dad — fresh from his solo with Furze Platt Voices earlier this month — had toyed with participating, but reasoned that the standard of musicianship among fellow Taplow parents would be rather beyond his ability.

The concert opened with combined choirs singing The Pasture (Z Randall Stroppe), which was an amazing sound. After this, the six founder members who still remain a part of Taplow Choirs — myself one of them — were invited to the front to receive a white buttonhole rose. I must say, I struggled somewhat with the supplied pin, even more so as I was, at exactly that moment, passed the microphone and required to address the 400-strong audience. 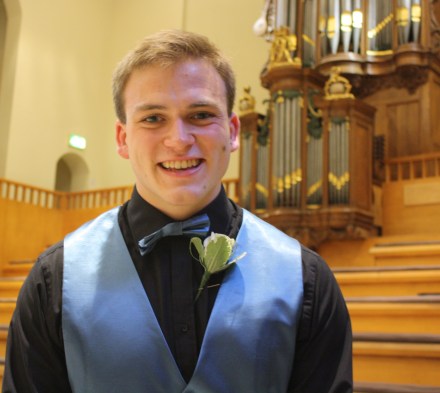 A week ago, Gillian Dibden, the choirs’ founder and director, asked if I would be willing to say a few words about the organisation. Happily I accepted the opportunity to speak, but was not really sure what kind of angle to take. There are many moments I treasure from the last ten years, but of these most are too personal to find relevance with a large audience. The merry-making of youth, in dodgy Spanish bars, would not appeal to the parents of the angelic-looking, prepubescent Boys’ and Girls’ choir members. And too obvious, I thought, was the “See? Not all young people are thugs” line (besides, Howard Goodall had gone down that route for his address at the Choir of the Year competition in 2008). So instead, en-route to Eton this afternoon, I bashed out something about the choral community of Taplow, and how wonderful it is to be a part thereof.

Adorning the walls of Taplow Village Hall (the rehearsal space we’ve used since the choir’s inception) is a series of murals, capturing vignettes of village life. I must (somewhat tentatively, whilst Gillian is about) confess that, on one or two occasions, my eyes have wandered from the conductor’s baton and marvelled instead at the amazing paintings.

They show all of the communities who call Taplow their home, from the Adventure Playground to the school, Scout groups to the church.

But notably absent from the walls are the Taplow Choirs, which were founded ten years after the murals were completed. In the ten years since, Taplow Choirs have brought together people of amazing talent; young people from across the area who revel in making music.

I feel confident, then, that if the murals were ever to be redone, Taplow Choirs would be right in the centre.

It’s a privilege to have been a founder member of the Boys’ Choir, and to have sung with this great organisation over the last decade.

Thank you very very much.

Such was the hurry in which I’d written my tribute, I hadn’t been able to print out the notes I’d made on my phone. Consequently, knowing how ill-fated it would be to attempt to look down at my tiny typings (my phone concealed behind my concert folder), I spoke without referring to what was in my hands. With hindsight, the peroration ought probably have been stronger, but to my great relief it received applause regardless.

Andrew Boddicker, who leads the Children’s and Boys’ choirs, conducted the concert’s opening piece, and it was lovely to see his predecessor, Philip Viveash, back to take the show-stopping Hope for Resolution (Paul Caldwell / Sean Ivory). It was Philip who really sparked my interest in choral music, and who – week after week – made singing such fun. For this, I took the opportunity tonight to thank him. David Manners, another brilliant fellow and a regular Youth Choir vocal coach, also took some of this evening’s conducting duties.

“A decade ago Philip Viveash and I sat on Taplow Village Green and talked about setting up choirs based in the village. That autumn, Philip began as Conductor of a Children’s Choir and Boys’ Choir.”

“Philip moved on and from September will be Head of Music at Tiffin Girls’ School. We are delighted to have Andrew Boddicker as Philip’s gifted replacement. And congratulate Andrew and the Children’s Choir on getting to the finals of the National Festival in Birmingham in ten days time.” 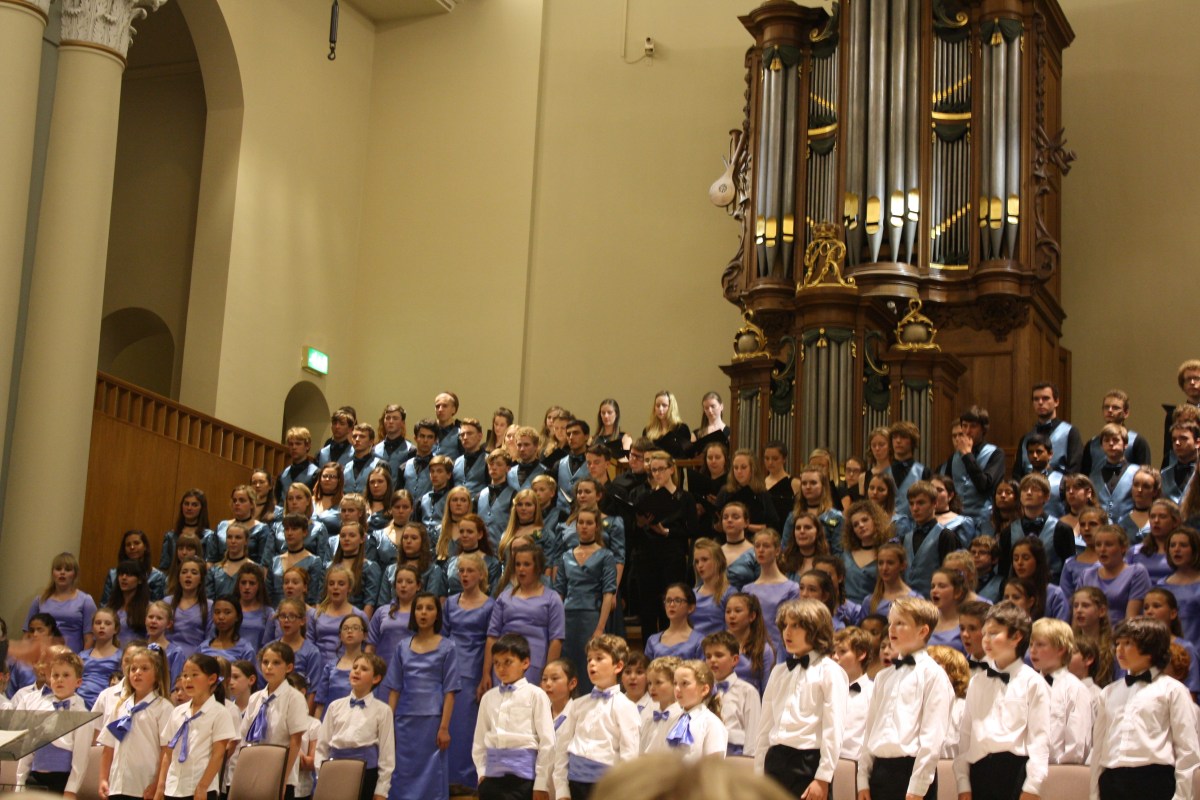 UPSTANDING SINGERS: The Combined Choir stand to sing ‘Hope for Resolution’ at the end of the concert.
[PHOTO: Ann Burdett 2014]

After the concert, some of the other senior Youth Choir members joined me for drinks at The Carpenter’s Arm – a last hoorah for another Taplow year. Unusually, however, a large proportion of us are actually taking gap years next year and plan to stay on at Taplow; thus, we have one more year in the choir to look forward to.

But the end-of-term concert did make me think. Last year, in an email to a 2013 leaver whom I deeply (yet entirely platonically) admired, I mused: “Sitting here now, high on the quiet pride of a happy, successful day, it’s obvious that there’s never enough time at Taplow. I wish I could get to know a few people a bit better.” Joyously, I have widened my ‘circle’ over the last year, and eagerly anticipate 2015’s Tour to make it wider still.

Fundamentally, though, singing tonight made me realise this: “I’m so, so proud to be a member.”