In a study room at school in early-February, the Prom Organising Committee was suddenly presented with its latest major headache. Following long, drawn-out discussions (nay, at times, full-blown arguments), the date had been fixed, as had the budget. A policy on ‘Plus-Ones’ had been decided, and finalised too – or so the Committee thought – was the venue. Suddenly, though, a bombshell: the venue unapologetically and totally unexpectedly pulled out, threatening all of the existing arrangements, organised throughout the preceding weeks.

Suited and booted, and ready to go to the prom. [PHOTO: Richard Burdett 2014]

Finding an appropriate venue was, by far, the hardest of the tasks the Committee faced. It had to be held on the Monday evening because several Sixth Formers would be heading off to Glastonbury in the middle of that week, and because the final Year 13 exam was not until the Monday morning. However, Mondays are traditionally the ‘day off’ for such venues, making choice far more limited. This was further exacerbated by the fact that many other local schools faced the same dilemma – creating a nightmarish problem.

Although I’d hitherto avoided getting involved with the Prom Organising Committee, I was happy to offer my thoughts on potential places to hold the prom. The Legoland Resort hotel was dismissed for being too dark, and although the Henley River & Rowing Museum (a stunning, contemporary building) was available for hire on the required evening, it was slightly too expensive for our budget.

Suddenly, though, as I was embroiled in an email exchange to get my Queen’s Scout Award signed-off, I had an epiphany. I remembered speaking at a splendid ‘Celebration Evening’ for Berkshire Scouts, held a couple of years earlier at Hall Place, the Georgian mansion at the heart of BCA. It would be, I realised, the ideal venue: big enough to fit everyone in, close enough to keep taxi costs down, and grand enough to feel suitably stylish. For me especially, it was even more apt: my education began fourteen years prior at the Burchetts Green Infants’ School, five hundred yards up the road. It would be fitting, then, to bid adieu to my years as a schoolboy in the very same place as that where they began.

So that’s where we held it. Deciding its location was, I’m afraid, my sole contribution to the Prom. On a particularly grey and drizzly Saturday morning, I did go to meet the manager with friends Sophie Davies and Chloe Banks, but thereon the organisational duties fell to Chloe and Cally Gormally.

They did an amazing job; everything was just right. Each £30 ticket included a glass of champagne on arrival, a £4 drinks voucher to be used at the bar, and access to a bountiful finger buffet throughout the night. Providing the soundtrack to the event, Infinite Events (a company owned by one of my fellow Year 13s) deejayed from 7:00pm to midnight. I slipped in and out of the discotheque, but mainly found myself enjoying the still summer air of outside. 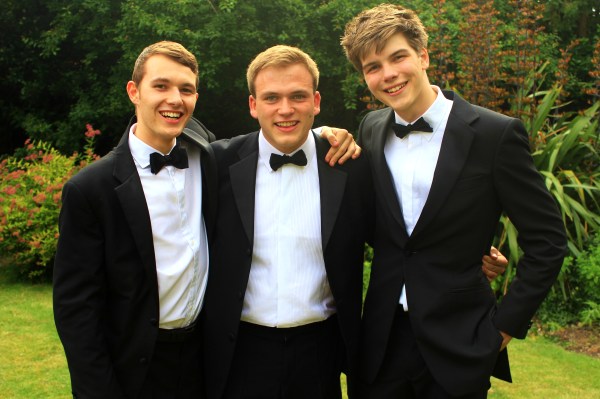 Among the prom’s attendees: boyfriends, girlfriends, and past Furze Platt students. Called forwards to the front, Mrs Wrenn (Sixth Form coordinator) and Mr Richards (Head of Sixth Form) were presented with a necklace and cufflinks respectively. With a nod to our 300-themed Leavers’ Day, the cufflinks were engraved with the inscription: ‘Furze Platt Leavers 2014 / THIS IS SPARTA’. Giving a brief acceptance speech, Mr Richards called us “the best year group ever”, attracting a vehement roar.

As the evening continued, it was good to talk to so many of my peers and hear about their plans for the summer. I finally had a real opportunity to catch up with my dear friend Lorna, and it was good to share stories from recent times with her. Outside, I welcomed the opportunity to be photographed with some of my closest buddies, as well as being pictured with Head Girl Sarah Donlon, Mr Richards, and Mrs Wrenn. I was impressed by the number of staff who had made the effort to come – this included Mr Sheppard, who admitted that he’d forgotten all about the Prom, until someone texted him to check he was on his way. 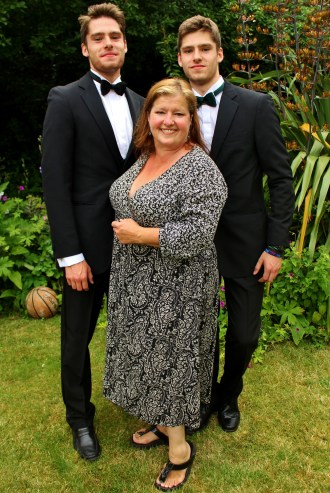 The whole event was wonderful – as, in fact, was the whole day. Earlier, straight from delivering cards and gifts to a few members of staff at school, I’d joined some friends for a pub lunch at The Bounty in Bourne End. Following a delicious fish and chips meal, Zac gave me a lift home to collect my freshly-pressed suit. I was very pleased to go on to ‘pre’ with the Barretts in the summerhouse at the end of their wonderful garden, before we all got changed with just enough time for our respective parents to take pictures, ahead of our departure. Travelling by a taxi minibus, there was a tremendous atmosphere on board, especially when we realised that the coach directly in front of us contained fellow Furze Platt students.

At the other end of the evening, at midnight, I shared a taxi home with Lorna, Sophie, and Sarah Janes, and although I’d vowed to head straight to bed, I texted Em to see if she fancied walking to a rumoured after-party. To my delight, she did, so after getting changed I strolled with her to the allotted meeting point. Unfortunately, it seemed there was no party there after all, but Jake rang me to give more precise directions. Eventually, we found our way to where everyone else was, and the partying continued for another couple of hours. Without wishing to elaborate any further, there was one slightly tense moment, but a sticky situation was avoided and all went home happy. 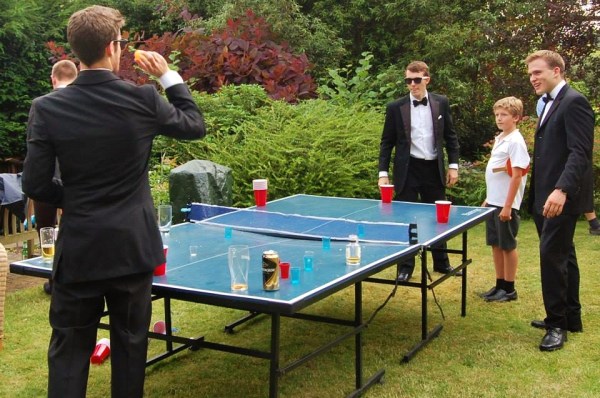 A game of Beer Pong in the Barrets’ garden, before leaving for the Prom.
[PHOTO: Karen Brooke 2014]

A fantastic finale to our time at Furze Platt, the Prom did one especially brilliant thing: it cleared the air. In the dying days of Year 13, the usual strong sense of community had somewhat collapsed. Tensions over the specifics of our Leavers’ Day celebrations had led to occasional unsavoury exchanges on Facebook; the malign effects of exams stress served only to compound the harm. But tonight you wouldn’t have known there’d ever been a rupture. Generally speaking, everyone was pleasant, everyone was merry, and everyone was happy.