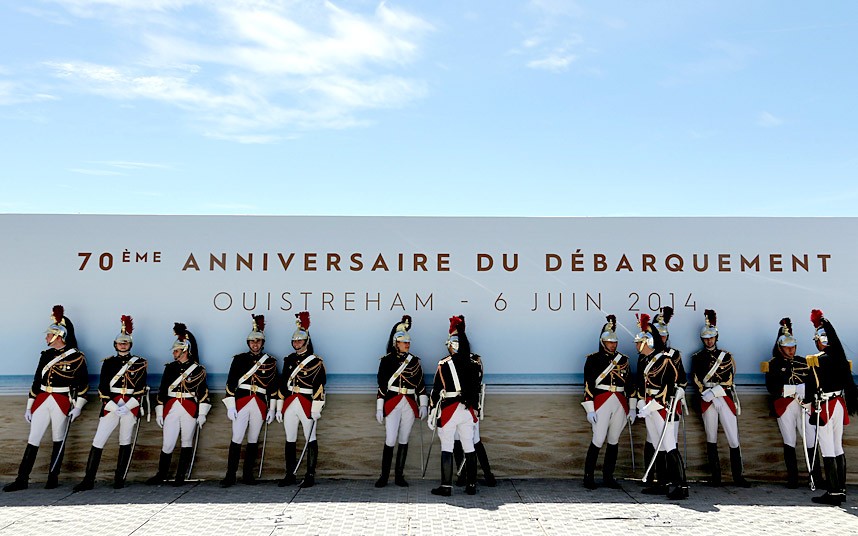 Under clear blue skies, sheltering from the heat of the blazing June sun, French Republican Guards stood in the shade of a giant hoarding. Upon it, a simple inscription: 70ème Anniversaire du Débarquement.

The weather on Friday could not have been more different to that which overshadowed “the Landings” seventy years ago. Masterminded with meticulous detail by General Eisenhower, Operation Neptune, as it was codenamed, had originally been scheduled for 5 June 1944. However, the night before, the RAF’s Group Captain James Stagg knocked on Eisenhower’s door, with fears – in that most typical British manner – for the weather. Stagg was a fascinating man, but in contrary to popular belief he “was not a good meteorologist”, according to one of his former colleagues. What he certainly was, though, was resolute. He would not be pressured into keeping quiet about the information he knew. 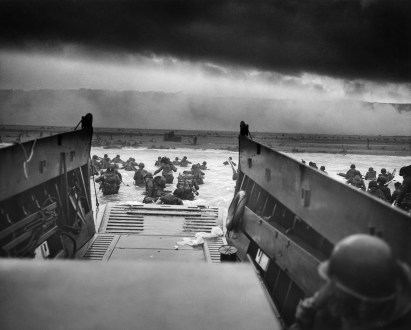 In order to understand the significance of Stagg’s meeting, you have to remember the sheer scale of the operation. This was to be the biggest seaborne invasion ever staged; the largest simultaneous movement of soldiers and ships. By this point, everything had been accounted for: moon, tides, and men. But now Eisenhower – who later went on to become US President – was embroiled in discussion with some plucky Brit, whose insight was threatening his brilliant plot. Stagg argued that the high winds would make it impossible for the air support to fly, and the sea would make the crossings extremely treacherous for the boats. Meanwhile, sat on the other side of the table, the American supremo knew that the same combination of tides would not occur for another two weeks – and any delay would put at risk the tightly-guarded secrecy of the operation.

Finally, Eisenhower made his mind up. Postponed by just one day, the armada would sail on the 6th. D-Day was on.

What always staggers me – actually whenever I hear of any of these big, bold, audacious assaults; staples of our nation’s military history – is the heroic bravery our forefathers displayed.

The spirit that ordinary blokes, some of them still boys, showed that day is awe-inspiring. Heading across the Channel, they cannot have hoped to have fully understood what awaited them. And yet, they went. 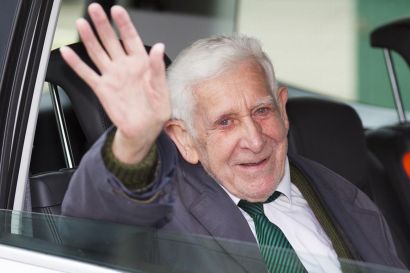 And so to 2014, where that fighting spirit proved still alive and well. On Thursday evening, 89-year-old Bernard Jordan was reported missing from his care home in Hove, and gone too were his medals. Care home staff had earlier tried to get him on a Royal British Legion accredited tour, but this had proven impossible. Not one to be deterred by a mere logistical dilemma, though, the former Hove mayor caught a bus and – without telling staff at the Pines care home where he lives – made his own way to Normandy. Speaking to ITV News as he headed home on Friday evening, with a definite twinkle in his eye he told correspondent Paul Davies: “Touch wood, if I’m still with us, I shall try next year as well”. Asked if he’d “be in trouble” when he got back, he responded with a chuckle: “I might be!” 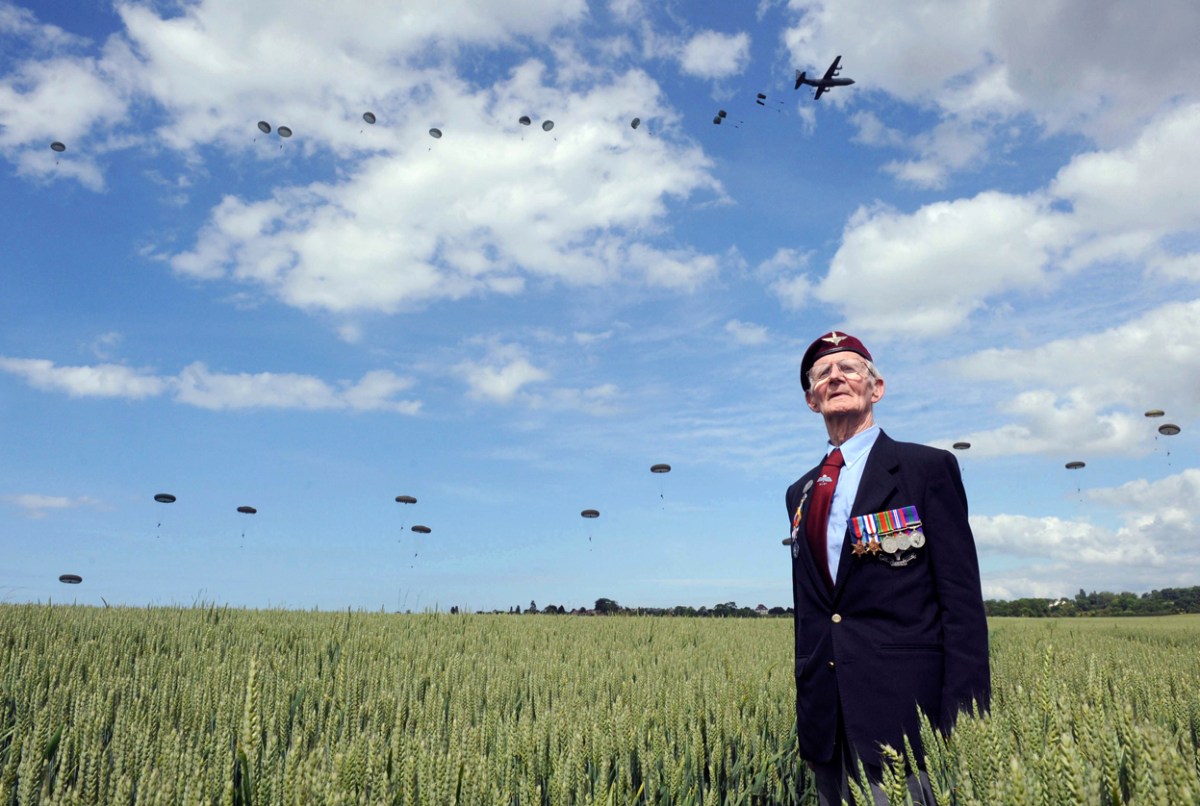 Frederick Glover, who was 18 years old on D-Day, looks out over the fields of Ranville, northern France, as soldiers parachute down. He himself was a member of the 9th Parachute Battalion, and part of a special volunteer force that was assigned to crash inside the Merville battery. (PHOTO: AP Photo / Thomas Bregardis)

Highlights of the commemorations in France included fireworks at Pegasus Bridge marking the moment British troops captured it, the Queen laying a wreath in a verdant Bayeux cemetery, and a service of remembrance in Bayeux Cathedral. As the day progressed, events became more informal, with a tea party for veterans, attended by the Duke and Duchess of Cambridge. 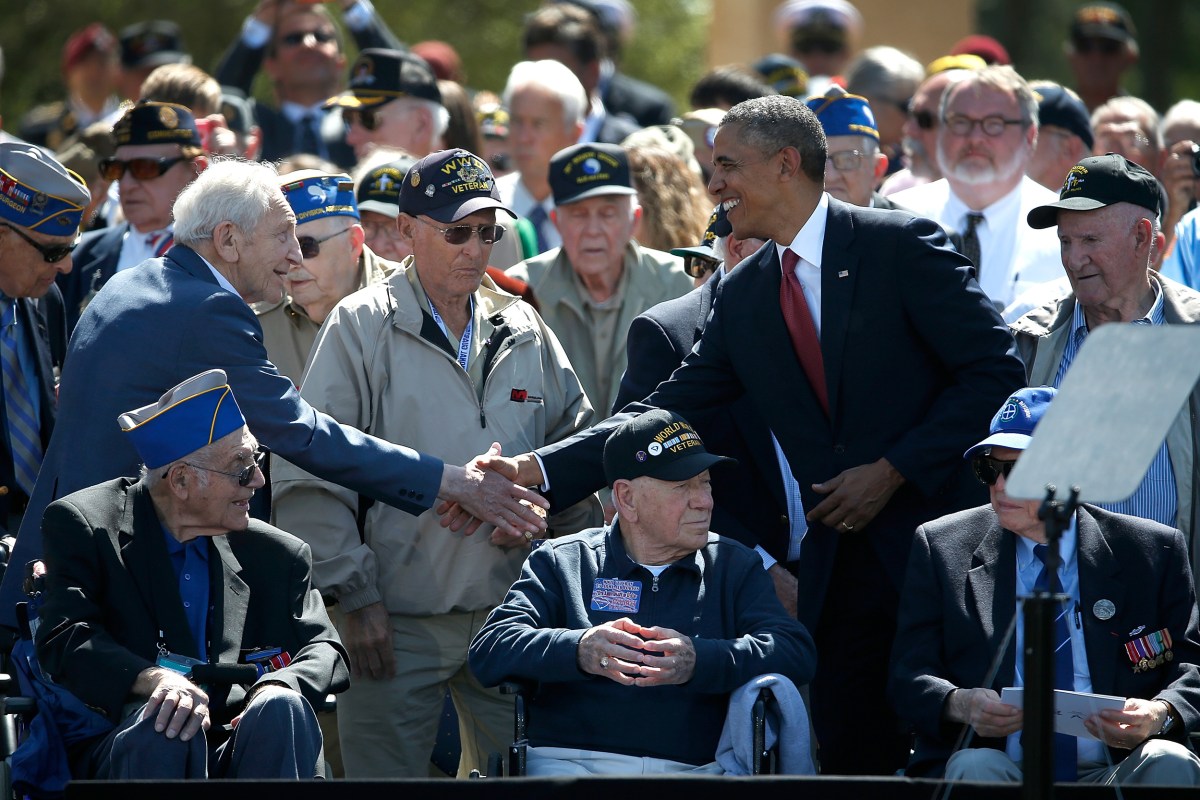 Barack Obama spoke on Friday (6 June) at the US military cemetery, paying tribute to soldiers of the D-Day landings. (PHOTO: Getty Images)

Barack Obama’s speech, given at the Normandy American Cemetery on Friday morning, was particularly touching. In it, he led a standing ovation for the servicemen, saying: “These men waged war so that we might know peace. They sacrificed so that we might be free. They fought in hopes of a day when we’d no longer need to.”

“If prayer were made of sound, the skies over England that night would have deafened the world.

Captains paced their decks. Pilots tapped their gauges. Commanders pored over maps, fully aware that for all the months of meticulous planning, everything could go wrong: the winds, the tides, the element of surprise – and above all, the audacious bet that what waited on the other side of the Channel would compel men not to shrink away, but to charge ahead.

Fresh-faced GIs rubbed trinkets, kissed pictures of sweethearts, checked and re-checked their equipment. “God,” asked one, “Give me guts.” And in the pre-dawn hours, planes rumbled down runways; gliders and paratroopers slipped through the sky; giant screws began to turn on an armada that looked like more ships than sea. And more than 150,000 souls set off towards this tiny sliver of sand upon which hung more than the fate of a war, but the course of human history.”

My grandfather, a real WWII hero 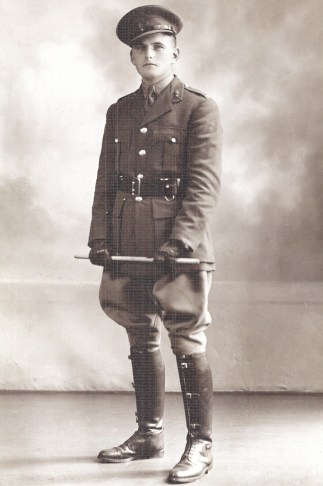 Capt Arthur Burdett, my grandfather, of the Royal Engineers.

My own link to D-Day is through my grandfather, Lieut Arthur Burdett of the Royal Engineers. Whilst sailing to France aboard the American SS Fort Macpherson, five days after the main operation and seventy years ago today, he “was awakened by a terrific vibration”. Giving his account of the event, he wrote: “I got up and found that something had hit a cabin on the starboard side and three men had been injured. I left the M.O. [Marine Officer] in charge and returned to my cabin. Then I was visited by the chief engineer who told me that a bomb had penetrated into one of the bunkers.”

“I went down into the bunker and found a bomb of about 1200 kilos lying among the coal. I sent my C.Q.M.S. [Company Quarter Master Sergeant] for some bomb disposal equipment which we had in a lorry in the hold and remembering that Cpl. Jackson had more recently been in a bomb disposal company, got him to assist me. We hoisted the bomb with a derrick and tackle, and then dumped it into the sea as I considered that it would have been dangerous to keep it on board in case there was further bombing.”

For his “conspicuous gallantry”, the King approved the award of the George Medal, recognising great bravery whilst not in the direct presence of the enemy.

My late grandfather’s story is just one from that astonishing time, and I’m sure that, over the past week, many such tales have been told. Lest we forget the sacrifices our relatives made, they are stories that must be continue to be told and retold.