Despite being the youngest, I’m also the most accident-prone member of the Burdett spawn. Somehow, both Matthew and Harriet have, between them, successfully navigated the last twenty years without so much as a cracked fingernail. I, however, in only half that time, have broken my left arm, my right wrist, and sliced open my left knee. With my saxophone teacher – whose lessons, by my injuries, I was prevented from attending – it became a running joke: “You must be due another hospital visit soon”. And, sadly, he was right.

Last Thursday morning, I emerged from the exam hall really rather pleased with myself. For the first time in my entire sorry school career, something I’d revised had actually come up in the paper. More than that, I’d been able to do virtually every question! I hadn’t run out of time. I didn’t go blank in trying to remember some obscure formula. Save for the last six marks, spread across two baffling subquestions, I’d given the paper a good go.

It was my last exam before the week-long half-term break, and meant I could now fully focus on preparations for the next day’s ‘Farewell Year 13’ event. Earlier in the week, Head of Sixth Form Mr Richards had – with Head Girl Sarah and me – compiled a list of various tongue-in-cheek ‘awards’. Although we’d nominated recipients for each prize, the slideshow we’d made looked terrible, so I’d elected to spend Thursday evening ‘dressing it up’. Concluding with a final valedictory video (Sarah’s voiceover for which I recorded on Thursday afternoon), I had almost everything I needed to work through the night and get it all done. My friend Jay Brickell had one last USB stick with suitable material so, en-route home from school, I cycled around to his house to collect it. And that’s when my accident happened. 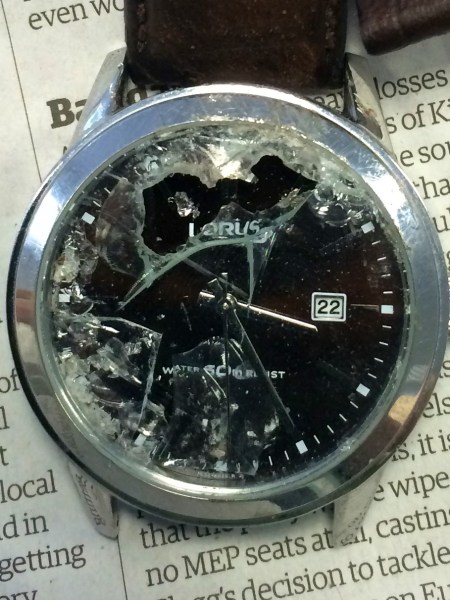 My watch, a present from my parents on being made Head Boy, lies smashed and broken. (PHOTO: Andrew Burdett)

Changing gear on my bike, my chain locked up and threw me off. Beneath me, my bike slid right across the road, twisting the handlebars and bending the derailleur. Picking myself off the floor, I brushed myself down, but my suit was ruined. Irreparably torn, my trousers were a state, and my jacket – with almost all of its cuff buttons now broken off – was unwearable too. My shirt and tie survived, but were dirty and bloodied. I’d badly grazed my left hand, and my watch – given to me exactly a year earlier, on being made Head Boy – was smashed. Its face, in pieces, had glass lodged between the hands; its time will forever read the moment of the crash: 3:25pm.

Forgive me, for making melodrama of my little fall. Certainly, at the time, I didn’t realise the full implications. I straightened the handlebars and carried on to Jay’s, knowing time was already tight. Opening his front door, his face betrayed his surprise at the scruffy urchin stood before him.

“Bloody hell, what happened to you?!”

He invited me in to wash my hands, and I cleaned my wounds in the bath. On his mother’s insistence, I accepted Jay’s offer of a lift home; my death-trap bike was duly wheeled into his garage. Bending down to grab my bag, something wasn’t right as I lifted it with my right arm. I’d noticed some swelling a few minutes earlier, but, putting weight through it for the first time, it was worryingly painful. Once home, Jay kindly carried my things into the house, then entertained me by showing a hilarious video on YouTube. But the painful right hand was still distracting me.

Mum was still at work, and Dad was manning a Dedworth polling station for the European elections. It was difficult to know what quite to do, but in the end I got Mum to come home slightly early, knowing it was now a matter for A&E. 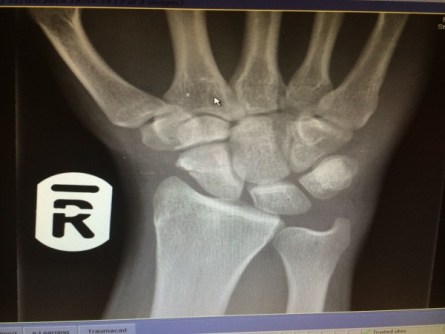 My broken scaphoid, as seen in the X-ray.

Hours passed between arriving at Wexham and finally being seen. When at last I was X-rayed, three doctors circled me, each stumped as to quite what the issue was. One was convinced it a mere sprain, and touched the debated region to prove it caused me no pain. Another chap – older and bigger than the last – was sure it was rather worse: a break to the scaphoid. “Sprained?!”, he guffawed, “That’s not sprained, my friend.” To disprove his junior colleague, he prodded my thumb with some force. I clasped my jaw, as pain surged my hand. “Yep, that’s the ticket,” I said through gritted teeth.

I was led through to the plaster department, where a nurse made a pretty cack-handed attempt at putting my arm in cast. So bad was it, in fact, that a more senior nurse looked on from the corridor in horror. She immediately instructed the nurse to remove the cast – prompting a remarkable five-minute search for an electrical socket, so that the oscillating saw could be plugged in. To my relief, the matriarchal figure then returned to my bed to do it herself. 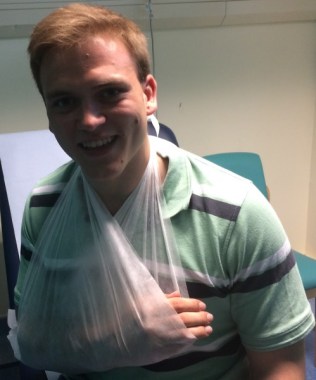 Arm in sling, prior to being X-rayed – and, ultimately, plastered. (PHOTO: Ann Burdett)

You have to laugh, because otherwise you’d cry. That’s not a dig at the NHS – generally speaking, it’s wonderful – but rather a nod to the triage nurse who needed me to help her spell ‘graze’, and the inept plasterer who clearly knew not what she was doing.

Leaving the hospital, five hours after the accident first happened, I was tired and disillusioned. My arm was heavy with the weight of the cast, and I hadn’t even begun recounting the same old story of exactly how it happened to every single person I met. Also, and more seriously, I probably hadn’t realised the full gravitas of the situation: the difficulty of completing exams with a (thankfully, only temporarily) useless right hand. Fortunately, after informing Sarah of the accident at 5:00pm, she’d coordinated with my friends Jake and Sam to complete the presentation on my behalf. They did a simply stunning job, and I’m immensely grateful that they were able to free me of that duty.

I honestly don’t know what I would do with Sam Ralphs and Jake Smith in my life, genuine lifesavers amen to them

Nearly a full week on, my wrist is slowly recovering… but typing for extended periods is uncomfortable and slow. I’m due to return to Wexham for a check-up tomorrow, at which point they’ll hopefully replace this plaster cast with a lighter fibreglass one. It remains to be seen, though, quite how I’ll manage in my exams, which begin in earnest next week.