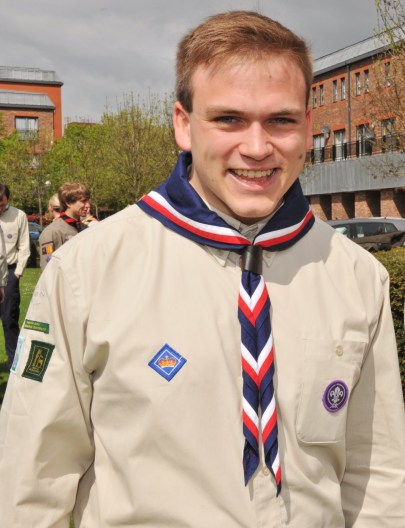 Andrew Burdett, at the Victoria Barracks on the morning of the Association’s National Day of Celebration and Achievement.
[PHOTO: Martyn Milner / The Scout Association 2014]

Anyone who knows me really well will know this: I’m not an overtly proud person. Yes, a picture of my enormous head sits at the top of this blog, and yes I occasionally over-hype my latest web content. But when my tongue is not buried deep within my cheek, I hate shouting about my ‘achievements’.

Today, though, I “can be rightly proud”, to quote the Very Revd Steven Lake, the Dean of Gloucester.

He wasn’t talking solely about me, of course; rather, he was addressing 500 new Queen’s Scouts, myself one of them, at the National Scout Service at Windsor Castle. His short yet touching homily discussed the parable of the talents, insisting that all of us – gathered in St George’s Chapel from right across Britain – must celebrate our success, but then return to our countries, counties, districts, and groups to continue our “good work”.

Billed as A Day of Celebration and Achievement, the Scout Association’s annual St George’s Day parade recognises those who have completed the Queen’s Scout Award – the highest youth accolade within the movement. To achieve it, 16- to 25-year-olds must spend at least eighteen ‘nights away’ as an Explorer or Network Scout; take up a skill; volunteer time to an individual or the community; and partake in a regular physical activity. As well as this, a four-day expedition must be undertaken; a further five-day residential project needs to be completed; and activities (under the headings ‘International’, ‘Environmental’, and ‘Values’) have to be signed-off.

Like most Queen’s Scouts, I was able to count my Duke of Edinburgh’s Gold Award for most of the sections. Better still, my attendance of the World Scout Jamboree in 2011 covered the ‘International’ requirement, while my faith-centric work on my church’s InSpire magazine was accepted for the ‘Values’ part. This is what was wonderful about achieving the Award: it brought together many of the things I love to do anyway. 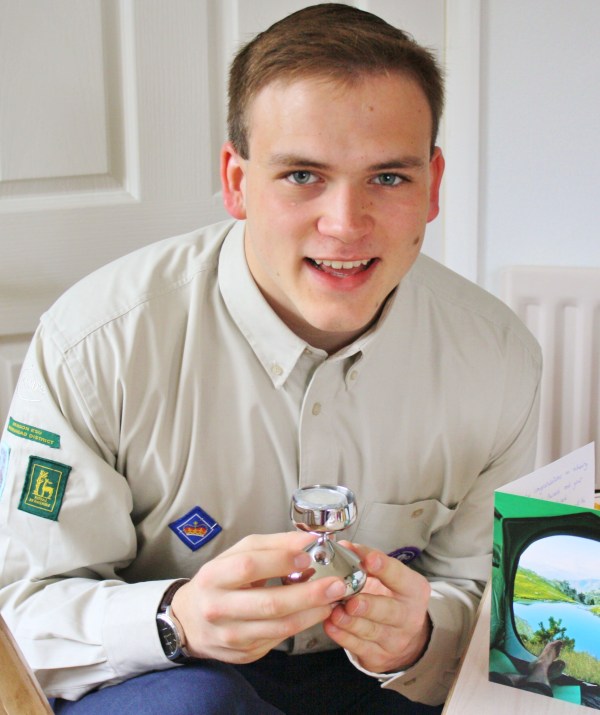 On the morning of the Queen’s Scout Award event in Windsor, Ann Burdett presented son Andrew with a tealight-holder in memory of his grandmother.
[PHOTO: Ann Burdett 2014]

At home this morning, my mother presented me with a beautiful tealight-holder, in memory of my grandmother. “She would have loved to see you collecting your award later,” Mum said, “so this is to remember her, and to mark your Queen’s Scout Award”. After breakfast, brother Matthew drove me to the Victoria Barracks in Windsor, which is where all of the Award recipients had been told to congregate. Registration was understandably slow, but eventually everyone was signed-in and our marching training began.

We were split into sixteen groups of about 30, then ordered into line. Later, we would be processing onto the quadrangle at Windsor Castle – the Scout Association being one of only two organisations permitted to march on that prestigious lawn; the Queen’s Guard being the other.

At lunchtime, we were given sufficient free time to head into town and find our families. Naturally, with so many uniformed youngsters contained in a fairly small area, it looked like something of an invasion – this was especially true in McDonalds, which proved a popular caterer! Mum, Dad, and Matthew had come immediately after church, so I joined them for a quick bite to eat before they left to have their special tickets checked, allowing them to enter the Castle complex. Meanwhile, I made a quick dash to nearby Crew, so I could purchase a T-shirt to wear underneath my Scout regalia. This is because, once the inspection of Queen’s Scouts began, I’d be standing directly in line with the Long Walk for a fairly lengthy period; strong winds would be funnelled up its 1.5 mile-long corridor, which risked making us quite cold. It sounds, perhaps, a little wimpish – not least for someone supposedly being commended, in part, for surviving bitter Scottish storms – but as the afternoon wore on I was pleased to have taken the precaution of wearing a second layer.

I walked up to the Royal Mews where, finally, twenty minutes later, the procession began. Marching as rehearsed, on into the Quadrangle, a mixture of proud parents and unaware tourists lined the route. As we took our places on the grass in each of our respective subgroups, the sixteen leaders bellowed commands prompting the synchronised movements of each party. Although I was supposed to be ‘eyes front’, I was pleased to have caught a glimpse of Mum and Dad, who’d managed to position themselves very near to where I would be standing. 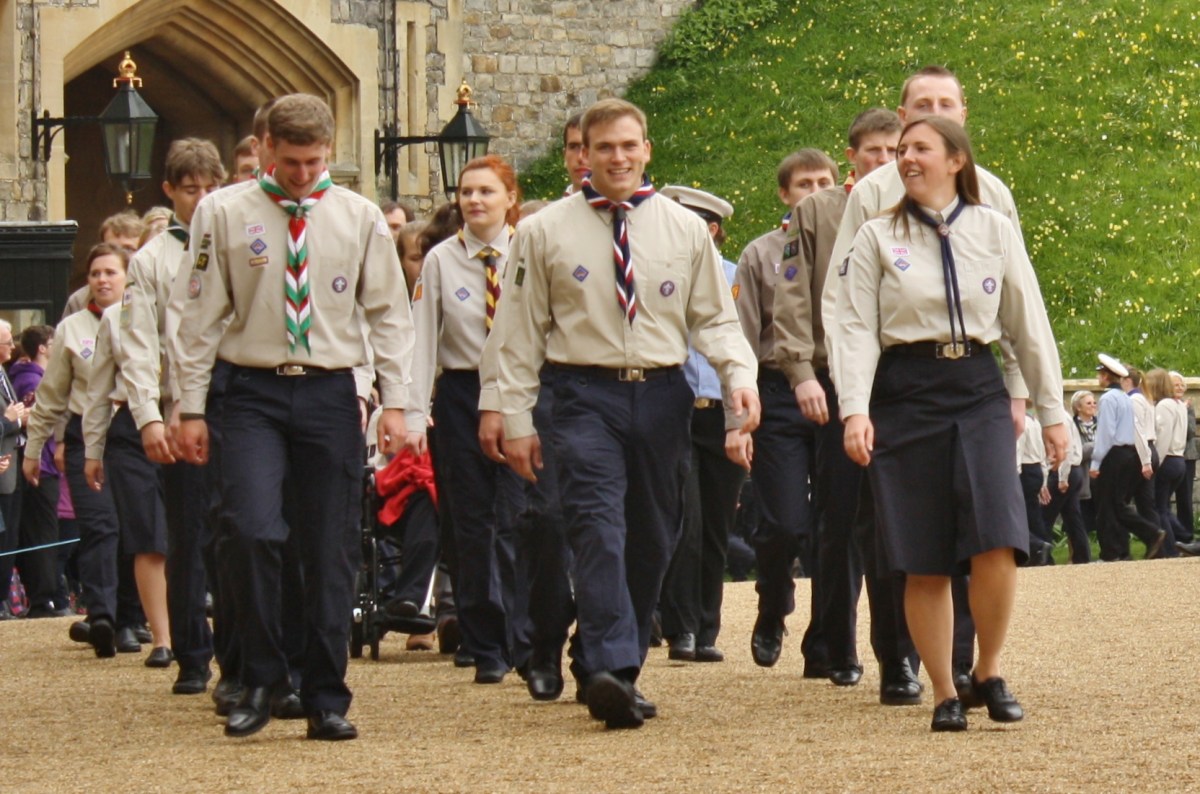 Andrew Burdett, centre, processes around the Quadrangle at Windsor Castle, at the end of the first half of the afternoon.
[PHOTO: Ann Burdett 2014]

Accompanied by music from both a regimental band and a marching ensemble of Scouts, the guests of honour made their way down the long lines of participants, striking conversations with small clusters of them as they went. The line in front of me was inspected by Prince Michael, the Duke of Kent, whilst the line behind had Wayne Bulpitt, the UK Chief Commissioner. In the distance, the rather radiant-looking Bear Grylls was speaking to Scouts in my line, and as he neared me I had a brief think about what I might say to him.

In the end, when he stretched out his left-hand to shake mine, I simply thanked him “for making Scouts cool”. I accept that, within some parts of the movement, there has been some ill feeling towards the man who marketed pen-knives “aimed at scouting” and the fellow who bombastically abseiled into the Jamboree opening ceremony. But make no mistake: membership has increased hugely since his appointment, and figures continue to rise. He is a positive asset for the organisation. (It is perhaps worth noting, though, that his role probably helped save his own career, as he virtually admitted in a 2011 Financial Times interview.)

Bear was taken aback by the view behind me (the same one which had prompted the last-minute T-shirt purchase) and at that moment encouraged me to turn around to take it in. This was especially nice, as it gave Mum and Dad the opportunity to see me with the Chief Scout – a proud moment for them both. 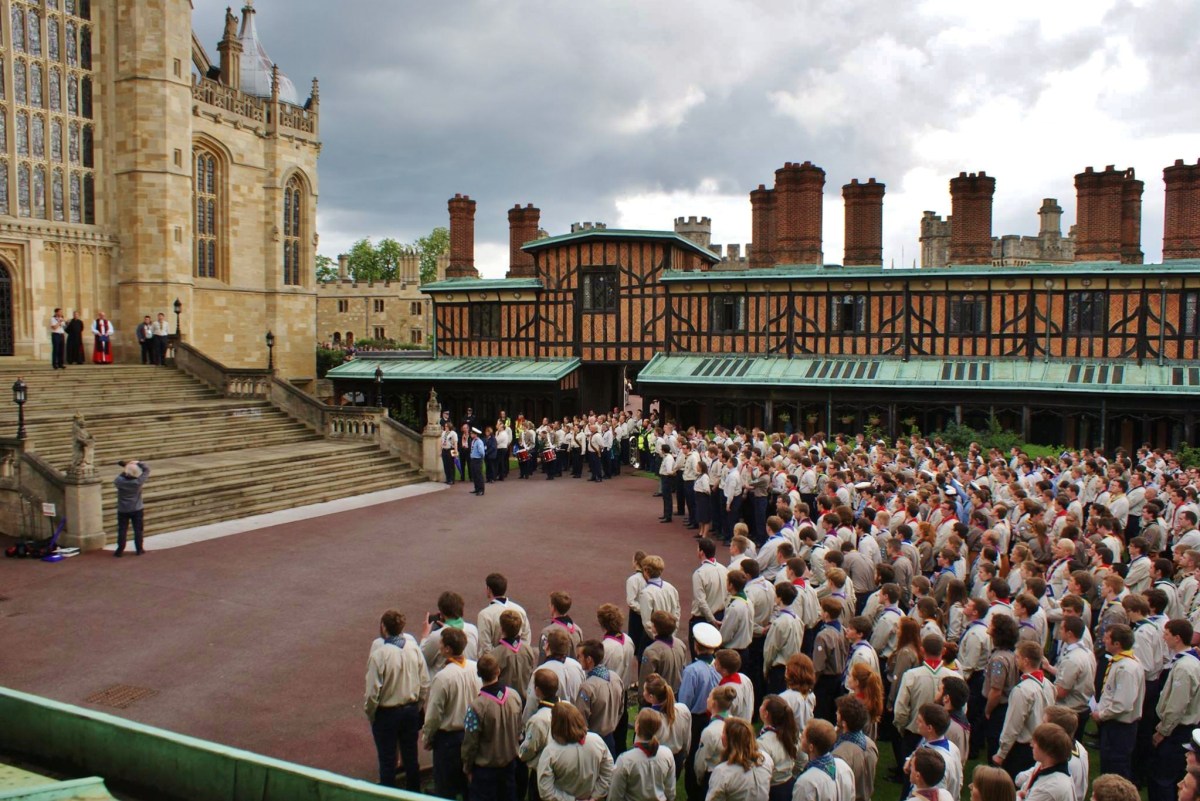 Assembled before the West door of St George’s Chapel at the end of the evening, Queen’s Scout Award recipients await the final sending-out from Chief Scout Bear Grylls.
[PHOTO: © The Dean & Canons of Windsor 2014]

The second part of the afternoon saw the lines processing around the Quadrangle and on into the lower precincts of the Castle. It was as we neared the steps of St George’s Chapel that I saw Matthew, whose ticket unfortunately prohibited him from standing with my parents. Therefore, it was good that we were able to exchange a glance at this point.

The service lasted around 45 minutes, and was relayed to loudspeakers outside the building, for the benefit of supporting families. During the service, we renewed our Promise, listened to a short sermon from an ordained Scout, and watched as a large banner (depicting the talents and achievements of Queen’s Scouts) was hung from the organ screen.

“This is not a passing-out parade. It is the end of your preparation for life. You can now be a full participant in it.”

After the service, I was complimented on my enthusiastic hymn-singing by one of the distinguished guests, whom I was sat beside. With a chuckle, I replied that it had been a mere warm-up for singing evensong over the river at Eton College chapel later this evening, itself being a kind of rehearsal for singing with Taplow Youth Choir back at St George’s next month. He smiled when I told him this, telling me warmly that I “embodied the spirit of the Award”. 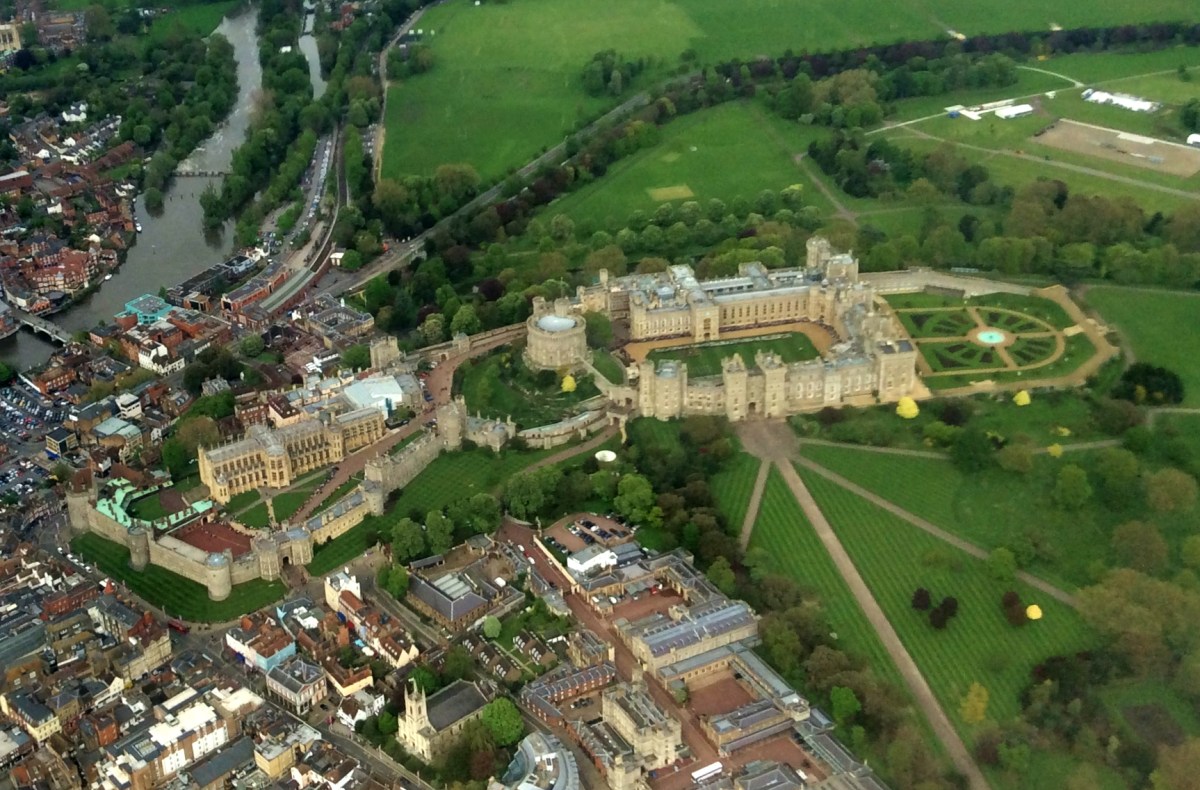 The Queens Scout Award ceremony, seen from the Heathrow flight-path. Observe the tiny row of uniformed Scouts standing on the grass within the Castle’s walls.
[PHOTO: Neil Morrison 2014]

This post was back-dated, having been written in mid-July 2014.
Advertisement