“We believe this is the most important event in history”, read the leaflet I was handed on arriving at this morning’s Walk of Witness. Referring to the original Good Friday, of course, rather than our own humble town-centre procession, it provided light reading. That was just as well, because – standing behind an impressively large crowd – I certainly couldn’t hear anything that was being said. 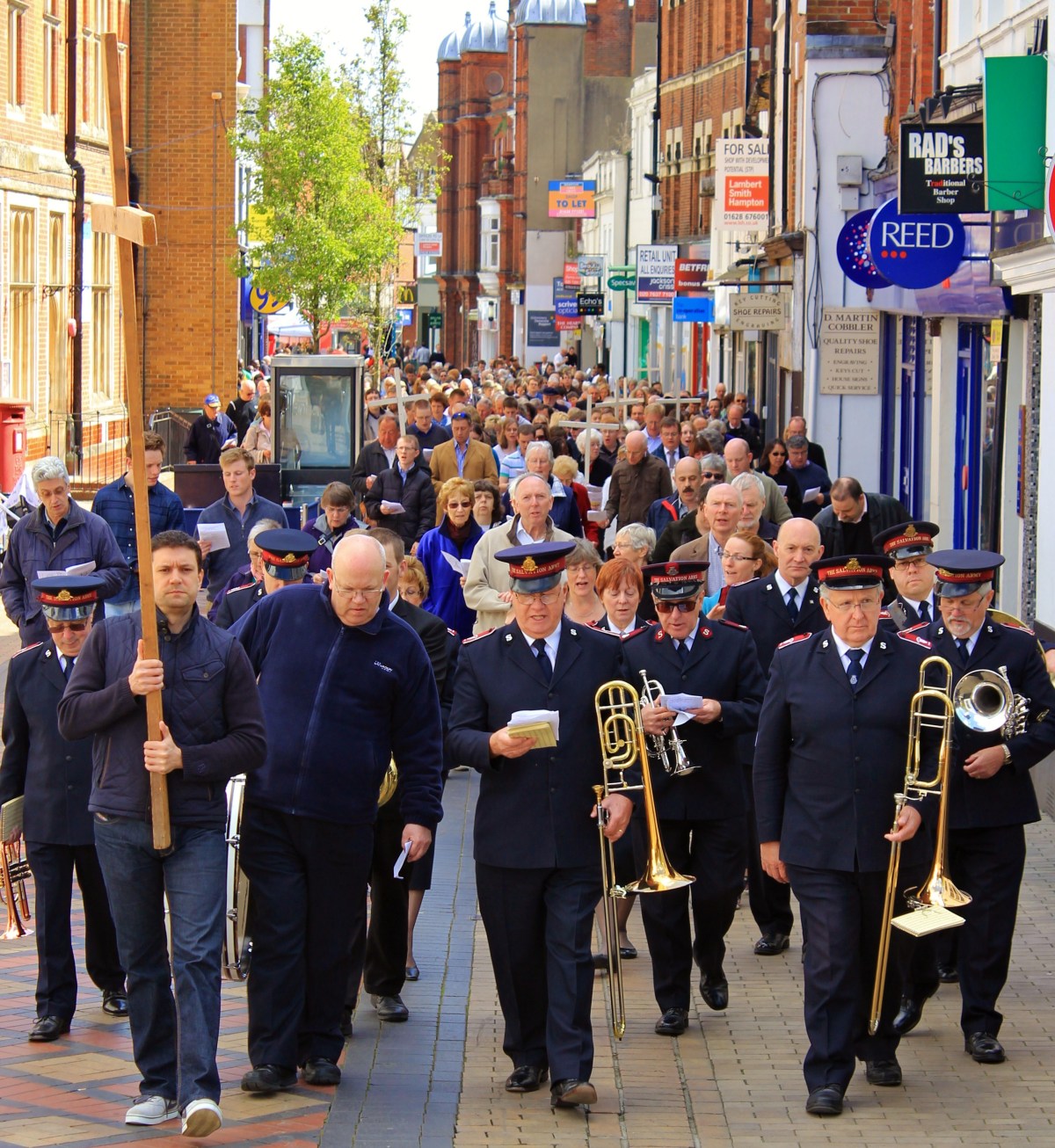 FOLLOWING THE CROSS: The cross-bearer leads Christians up the High Street. (© Andrew Burdett 2014)

For all manner of reasons, I was actually a few minutes’ late for the walk, which this year began at Sainsbury’s. Consequently, by the time I arrived, it was already at its second stop, at the bottom of the High Street. It wasn’t long before my friend Phil Bray arrived and, clocking me, came over to shake my hand. Feeling like naughty schoolboys, laughing in a situation at which we ought not, we mocked the poor amplification and dearth of hymn-sheets. Most amusing, though, were the hampered efforts of shoppers, trying to negotiate the enormous body of Christians blocking access to the Friday morning market.

Reverend Sally Lynch (vicar at my own church, St Luke’s) led prayers outside Boots, before the Salvation Army led the procession up to Wilkinsons. By this point, Phil and I had managed to move to be nearer the speakers, meaning that in addition to hearing what was going on, we could also see. Standing alongside Jeremy Harris of All Saints, a lady was signing John’s gospel as it was being read. Likewise for Nick Lowe’s inspiring prayers.

The procession’s final stop was outside the High Street Methodist Church. Assembled before its steps – and surrounding Lydia Karpinska’s Boy And Boat statue – the final words were delivered by Gary Homewood, the Methodist minister for Maidenhead. After one last hymn, accompanied by the band, Revd Homewood gave a blessing before inviting the crowd in for tea and a “huge quantity of hot cross buns”.

The public’s perception of Christianity is often blemished by the enthusiasm of street preachers. Overzealously inflicting their views upon ears that simply don’t want to hear, I have – on occasion – found myself mildly embarrassed to be even vaguely associated with them. But if you buy into the idea of a ‘Christian family’, such preachers are in fact my brothers and sisters, and my embarrassment therefore ought to be ill-founded. So to see so many Christians, walking side by side, as we did today, was a proud sight. Let us continue to annually beat our walk of witness, and permit us to shout – loud and audibly – of “the most important event in history”.