Every year, around this time, there’s always a fortnight of Comic Relief-related programmes broadcast across the BBC. Celebrities are always sent on lovely hill walks, or on amazing kayaking trips, or what you and I might regard as a holiday – and for which many people would pay hundreds (nay thousands) of pounds – all in the name of charity. The idea is that you watch the stars apparently “suffer” and, after an hour of feeling terribly sorry for them, you feel sufficiently compelled to “pick up the phone” and donate. 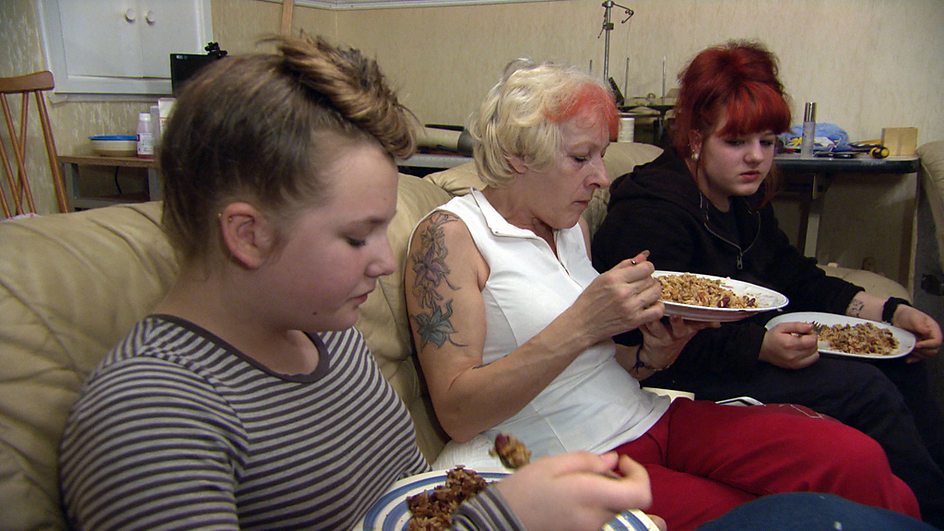 One of the host families with whom Rachel Johnson stayed eat a meal the journalist has prepared – albeit one that cost more than the weekly food-budget allows.
(PHOTO: © BBC)

A few years ago, I stumbled across a new take on the familiar format. Rather than hiking up Kilimajaro or swimming from one end of the Atlantic to the other, Famous, Rich, and In The Slums put four well-known British personalities in a different kind of misery: right in the thick of it, in the African communities that Comic Relief’s money helps. The programme’s premise was simple: the celebrities would be stripped of their wallets and possessions; given £2 to buy only the most essential necessities; and then, in order to stay alive, they would need to find work to earn a wage. Of course they would cry. Of course they would “suffer”. Of course they would read out the donation-hotline phone number at the end. But, unusually for these such shows, I actually went on to make a donation. 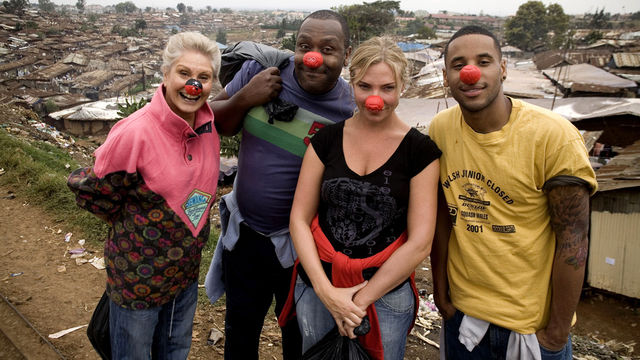 I don’t know what it was, but there was something about that two-parter that really struck a chord. The ‘talent’ fully embedded themselves in that society, living and working alongside destitute Kenyans, in what is Africa’s biggest slum. Samantha Womack shared a roof with a prostitute – there is apparently precious little career-choice for many women. Angela Rippon stayed with an HIV-positive hairdresser. Reggie Yates, it seemed, got lucky – a generous wage, and enough cash left over to watch a football match on a tiny television in the camp’s tavern. However, all this extravagance was funded through a rather less than glamorous job: it was his responsibility to empty the slum’s disease-ridden lavatories into the local stream. Lennie Henry was so saddened by the experience that he withdrew from the programme and bought a house for the family with whom he had been staying.

The company that made that programme is called Love Productions, and they attracted headlines earlier this year with all of the controversy surrounding their “fly on the fly-covered-wall documentary” Benefits Street. ‘Poverty porn’: the moniker that the press labelled its unique genre. Millions of people tuned in week after week, eager to see what the James Turner Street miscreants got up to this time – only to then tweet in disgust at the thought of such “lowlife scum” sponging off the state. At its heart, I think Benefits Street was a pretty decent portrait of some element of UK poverty, but that name betrayed its real purpose: to pull in the ratings for Channel 4.

Anyway, Love Productions has had another go at the Famous, Rich… format, and this week the BBC screened its new two-parter for Sport Relief.

Featuring British families on the breadline (that is, if they’ve got any bread to make a line), Famous, Rich, and Hungry was, for me, a worthwhile investment of two hours. Poverty is all around us, we’re so often told, to the extent where some of us are accused of poverty denial. (Erm, yeah, but between you and me… what poverty?!) Sure, money’s tight, but these days no one actually goes hungry. Do they?

Well, apparently they do. And to find out for certain, enter a teenager from Kensington who’d just had a £25 breakfast. Enter Theo Paphiterole – he of Dragons Den – in a characteristically flash Maybach. Enter Rachel Johnson – whom, thanks to occasional, irrelevant flashes of her brother Boris, we are reminded is the journalist sister of the Mayor of London. Oh, and there was some fat, other woman, who looked neither famous nor rich, but, as the first episode progressed, looked pretty convincingly hungry. 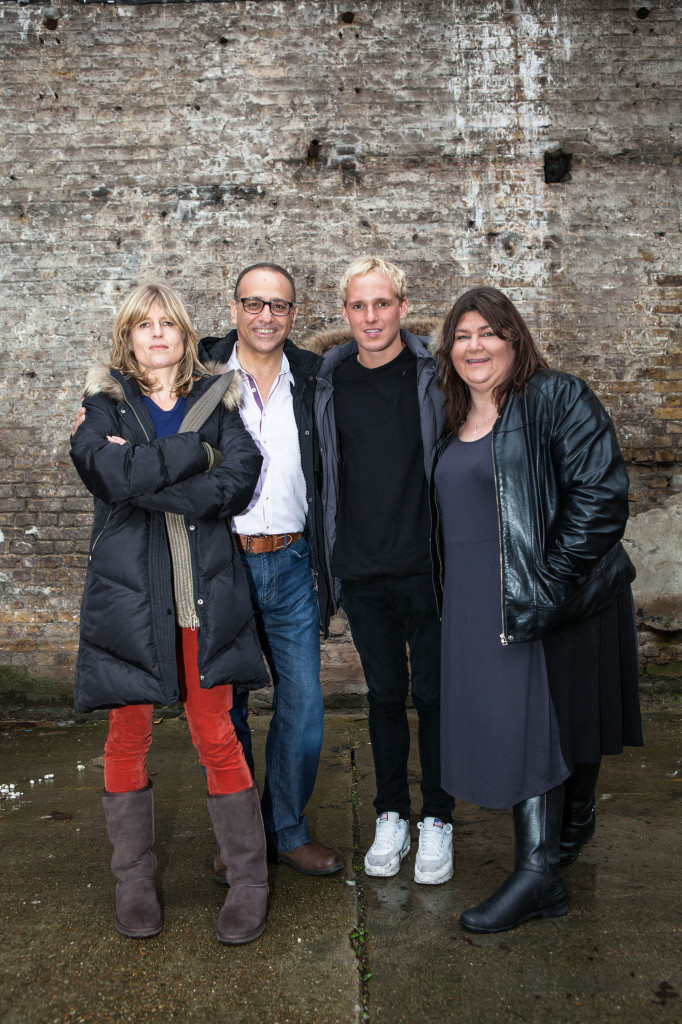 Actually, I diminish the ‘Kensington teen’ somewhat; Jamie Lang was superb. I have never watched Made In Chelsea, nor TOWIE, nor the Newcastle one, nor the Welsh one (to be honest, I didn’t even know there is a Welsh one until I started writing this line), I think mainly because I don’t understand the point of such programmes. At least when you watch The Apprentice, you know they’re all competing for a supposed job. The people who still watch X Factor know that everyone’s in it to get the long-prophesied “one-million pound recording contract”. But, as far as I know, the ITV2-style reality-television programmes revolve simply around people watching other people, erm, exist.

It’s prejudice, is what it is. I’ve never seen shows like Made in Chelsea, yet I happily slag them off, much like I would have slagged off this splendid young man Mr Lang before watching him tonight. Although trying to be empathetic, he wasn’t quite the ‘everyman’: one, admittedly self-corrected, comment stood out: “If the washing-machine breaks, or the Aga – not the Aga, the oven – breaks, what do you do?”. Nonetheless, it was great to see his opinions shift over the course of that first episode, just as mine did too, acknowledging by the end that “maybe my definition of poverty is slightly blurred”.

“This is a lovely street in suburbia, so you don’t expect poverty behind these walls.”

The programmes were not without flaws. Long, thorough examinations of debt are no way to retain an audience, so you can’t blame the makers for instead exposing ruthlessly the personal ‘story’ behind each case. Lincolnshire man Paul, Cheryl Furguson’s 49-year-old host, explained he was no longer fit to work – and, worst of all, he couldn’t bear admitting that to his several grown-up children. Many of the newspaper columnists have since given Famous, Rich, and Hungry the kind of cold reception they pseudo-profoundly delivered upon Benefits Street. Barbara Ellen is right to argue that poverty cannot “be grasped from a fleeting visit”, but a snapshot of it can be obtained. In a land of prejudiced, alleged ‘poverty-deniers’ like me, I’m sorry, but it needs to be shown to as wide an audience as possible. Poverty is real, and it’s here in Britain today.

Famous, Rich, and Hungry is available to watch on the BBC iPlayer now. (Links: Part 1 / Part 2)