As will doubtless be well-reported in tomorrow’s papers – which are, I’m afraid, still hungry for every remaining Mandela-related headline – today saw South Africa remember the life of its former President. And, as will also be well-reported in tomorrow’s papers, at the memorial service, Prime Minister Cameron and President Obama lent in, as Danish premiere Helle Thorning-Schmidt snapped a picture of herself with the pair on her iPhone. 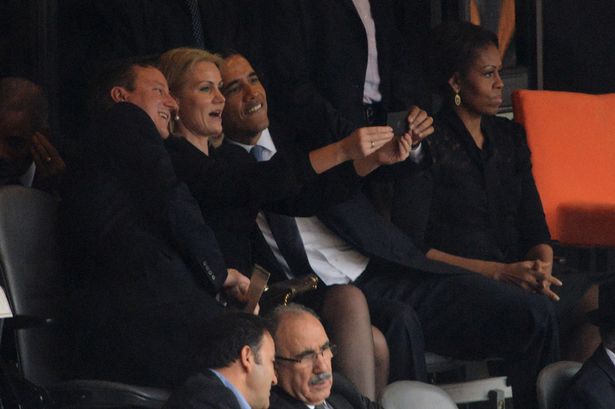 In a funny way, it’s interesting that this mammoth news event of 2013 clashed with a much smaller one: just last month, ‘selfie’ was named Word of the Year. Gone are the days of “been there, done that; got the T-shirt to prove it”. Now, it’s more, “been there, done that, and here’s 1,600 pictures of me that I’ve uploaded to Facebook for you to dispassionately click through”.

But, at one of life’s (now rare) sombre occasions, was it really acceptable for the picture to be taken?

Selfies, by nature, place oneself as at a higher status than the circumstances around one. In most instances, the thinking goes: ‘no one else was going to take a picture of me here, so I’ll take one myself’.

Surely, this self-centred act conflicts with the spirit of humbleness that Mandela is renowned for? Probably.

It gets worse. On Tumblr, there’s an astonishing self-explanatory blog called Selfies at Funerals. For me, many of its featured posts defy belief: as one girl buried her great-uncle, she was apparently more interested in sharing with the world her own curvy, black-clad figure, than paying any ‘last respects’.

Cocooned within their self-centric orbs, people forget that the world does not necessarily always revolve around them.

And yet, there is another way to look at ‘Selfie-gate’ today (and, seriously, how many more ‘-gates’ can there be?).

In that photograph, there is a mix of men and women. And there is a mix of black and white. All three people are world leaders and, more than that, they represent the first of a new generation of such: Obama, the first black US President; Thorning-Schmidt, Denmark’s first female Prime Minister. The fact that, in South Africa of all places, they can carelessly lean in so closely together is something that would have been unimaginable even a quarter-of-a-century ago. For the man whose life was being celebrated today, that freedom, that blurring of repressive dividing lines, is the greatest legacy – captured, unwittingly, in an arms-length photograph.

Mandela, I’m sure, will want a copy for his albums.