By whatever means you first heard the news, the chances are that you’ll forever remember where you were. Nelson Mandela, the South African President, has died aged 95.

He was a revolutionary, campaigning against everything around him, because he believed so strongly in democracy for all. He longed for not just the end of white domination but “fought against black domination” too. Crucially, he “cherished the ideal of a democratic and free society in which all persons will live together in harmony”.

– Nelson Mandela, statement from the South African Supreme Court dock at the opening of his trial against charges of sabotage, 20 April 1964

Although initially committed to (and probably famed for his support of) non-violent protest, Mandela co-founded the militant Umkhonto we Sizwe group. It is his leading of a bombing campaign, targeting government installations, which led to his arrest in 1961. He was put on trial, convicted of sabotage, and sentenced to life-imprisonment.

And there, in prison, would Mandela sit for nearly three decades.

The conditions were so cold and damp that Mandela fell ill with tuberculosis, eventually leading to his move to the Victor Verster prison. At this new facility, he lived in relative comfort: a warders house, his own personal cook, and the ability to complete his Bachelor of Laws (LLB) degree. The 70-year-old ‘terrorist’, now thought to be facing his final days, was at least afforded this stroke of luck. 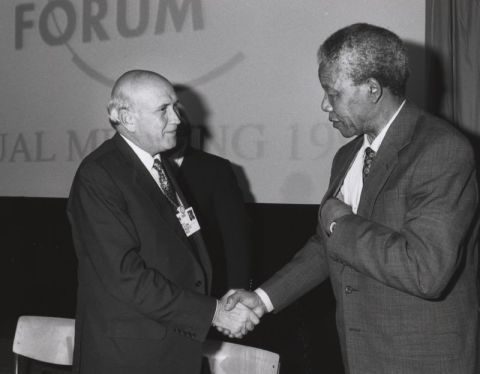 But his luck didn’t run out there. Far from it. The man who, decades earlier, had successfully blown up government ministers was invited round for tea with the new President, Frederik Willem de Klerk. It was astonishing – not least because de Klerk was a white conservative – but he really was convinced that apartheid was unsustainable. All leaders of the banned African National Congress (ANC) party were released… except Mandela. His freedom would be too politically painful just yet.But these were tumultuous times, and as the Berlin Wall fell in one corner of the world, de Klerk called his Cabinet together in another. First, he wanted the ANC to be legalised, and, then, he wanted Mandela to walk out of prison. 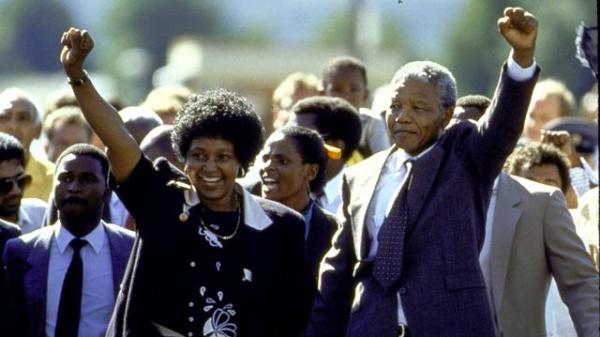 For me, most touching of all Mandela quotes is this:

“We soon grasp the concept that we are not kept conducting a struggle against individual whites. We are fighting the principle; we are fighting white domination. And in the course of that struggle, we can form friendships with people from other sides.”

That spirit of reconciliation was witnessed throughout the next decade. Mandela’s Presidential inauguration was broadcast to a billion people globally, and it was a white man who became his Deputy. FW de Klerk – the man with whom Mandela had sipped tea at the start of his road to Freedom – was the seventh and last President of apartheid South Africa, and the first Deputy of its post-apartheid era.

As the last day of the millennium faded away, Mandela (now no longer President) revisited the Robben Island cell where he served much of his sentence. There, he symbolically lit a candle.

In 2006, David Cameron admitted that the Conservative Party had been wrong to call Mandela a terrorist decades earlier. Tonight, the now-Prime Minister said of Mandela: “A great light has gone out in the world”

The one person he didn’t forgive was his own wife, Winnie Mandela, the ‘Mother of the Nation’ whose hand he held as walked out of jail. He’d been informed in the latter years of his imprisonment that she was responsible for the torture and killing of opponents in Soweto. Loyally, he vowed to stay with her, until she be found guilty by trial. The South African Truth and Reconciliation Commission went on to discover her to be “politically and morally responsible for the gross violations of human rights committed” by the criminal gang she formed. Nelson Mandela divorced her. Violence now had no place in his Africa: peace, now.

It’s no surprise that FIFA was so desperate for him to appear at the World Cup a few years ago: he was, every inch, an icon of the ‘new’ South Africa. A “courageous fighter” who embodied all that the new world stands for; in short, “he became a symbol of something”, as Nick Robinson reported this evening. 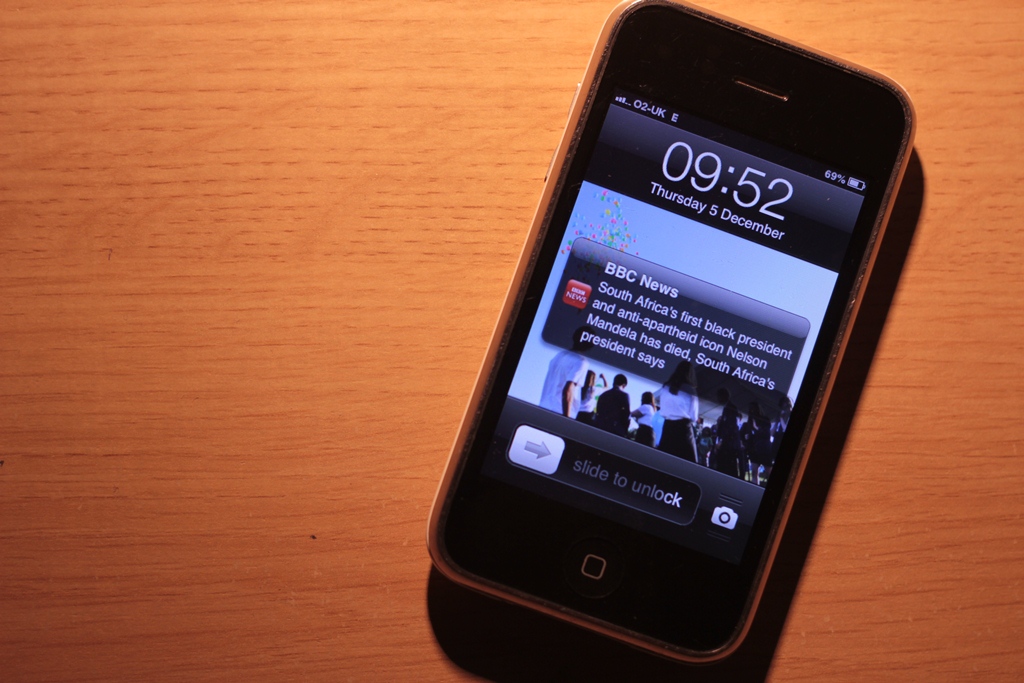 I heard the news of Nelson Mandela’s death at home, via a push-update from the BBC News app.
(PHOTO: © Andrew Burdett 2013)

The world is now so very different to that which Mandela was born into. Those phones and tablets and TV channels and Twitter-streams, through which the news was delivered today, didn’t exist in 1918. Even by the time Nelson Mandela was freed, most still hadn’t been dreamt up.

But Nelson Mandela had a dream, more powerful – more timeless – than any of those technologies.

– Barack Obama, the first black US President, on the passing of Nelson Mandela, 5 December 2013