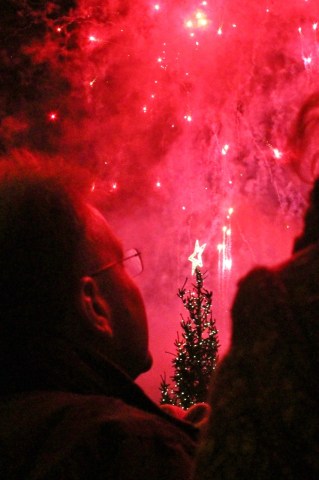 BRIGHT SPARK: The switching-on of the Christmas Lights – and accompanying fireworks display – was enjoyed by young and old. (© Andrew Burdett 2013)

Half an hour to go before the big switch-on, and a woman is pushing a trolley down the High Street. It’s fully laden with dozens of twinkling battery-powered lights; a dazzling aray of coloured glow-sticks are illuminating the lady’s face. But she’s not happy.

“There must be a hundred-and-one of us here,” she complains, admittedly somewhat exaggerating reality.

Nonetheless, it is true. The place is crawling with such trollies, each with its alluring products pitched perfectly to draw the attention of children.

This is Maidenhead Town Centre on the penultimate Saturday before December, and it’s wonderful to see the townspeople out in force. The rain at last year’s event was so torrential that it kept most people away – and led to the cancellation of the annual fireworks display. (Or so I gather… I was at home. In the warm and dry.) But with the weather looking set to hold – and on the promise of a bigger, better fireworks display than ever – I got down here in time to hear the last few songs from the band.

The Town Hall balcony became the stage for Master of Ceremonies Jeff Lloyd (a veteran of these such switch-ons), who shared the space with the Mayor, Cllr Andrew Jenner, and Basil Brush, the famous TV fox. I was delighted that the children’s favourite, here to promote the Theatre Royal Windsor pantomime, was being voiced by the real live actor of the Fountain sitcom. Being hidden from view – as ever – at first I feared that the puppeteer was merely reacting to a pre-recorded voice-track. My doubts were quelled, though, when an eight-year-old competition-winner was welcomed onto the balcony.

“Don’t step over the funny man sat on the floor, Sophie”, warned ‘Basil’, clearly concerned for his

With a crowd of thousands packed into St Ives Road, Jeff hilariously called for the “comedy plunger” to be ceremoniously brought onto the stage, and led the mass countdown.

The large conifer flashed into life, endless rockets were detonated from the roof of the building, and the PA system launched into some overplayed Christmas cheese.

You can knock the commercialisation of this ancient Christian tradition all you like, but Maidenhead hasn’t been as busy as this for years. How bustling it all seems tonight; how healthy.

The first big milestone in the Countdown to Christmas has been reached, and I for one am brimming with excitement.