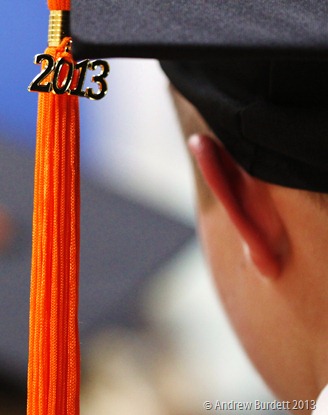 Twelve months ago, on the day in between my final GCSE exam and the ‘prom’ ball, my classmates and I donned academic gowns and mortarboard caps to formally ‘graduate’ from Furze Platt. For many, it was an entirely trivial affair: the vast majority of the yeargroup returned in September, to join the Sixth Form. But for others, it marked their last hours on the school site, at the end of five happy years at the Senior School.

Since last June, time – as I’ve occasionally stopped to remark – has flown by with shocking speed. Now Head Boy, in a year’s time I myself will have left Furze Platt. Again. Except this time it’ll have been for good.

But today I was able to pause to watch as, a year on from the start of my own glorious summer of Year 11, my younger schoolmates took their turn at wearing the formalwear.

Some of the photographs that I took today follow. 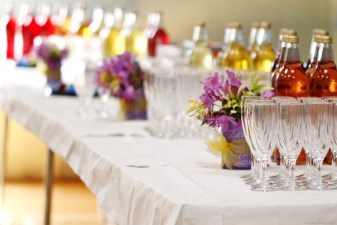 REFRESHMENTS PROVIDED AT THE BACK: Bottles of Shloer awaited drinking at the back of the Hall. 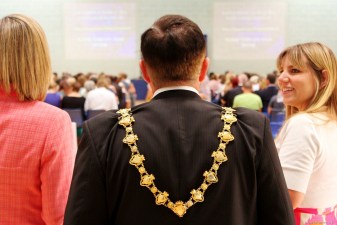 LET’S GET STARTED: Ms White, His Worshipful the Mayor, and Ms Morris before the ceremony begins. 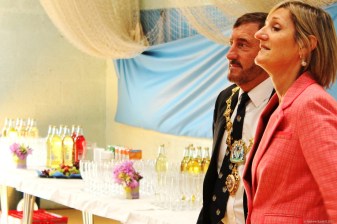 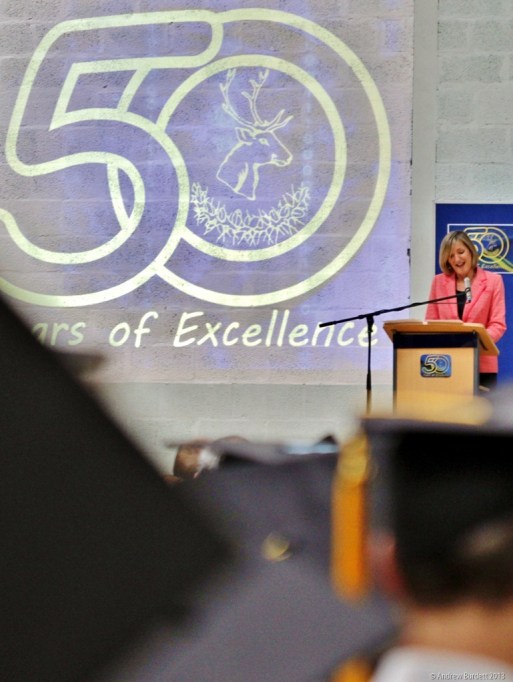 THE BIG FIVE-O: Ms White pointed out that these ‘graduates’ would leave Year 11 in the school’s 50th year. 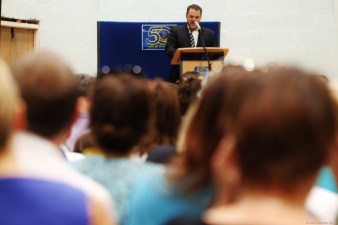 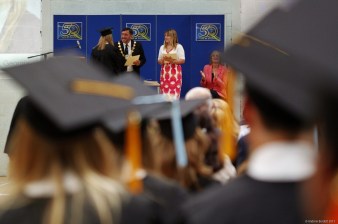 COME ON DOWN: Cllr Andrew Jenner greets one of the Year 11 ‘graduates’ on the stage. 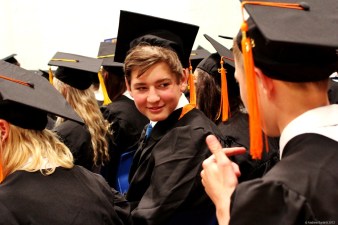 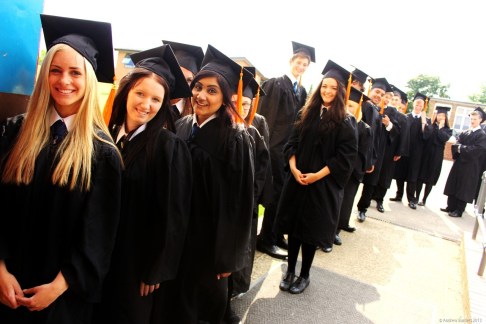 LINING UP NEATLY: Some of the girls of Year 11 stand outside before processing in. 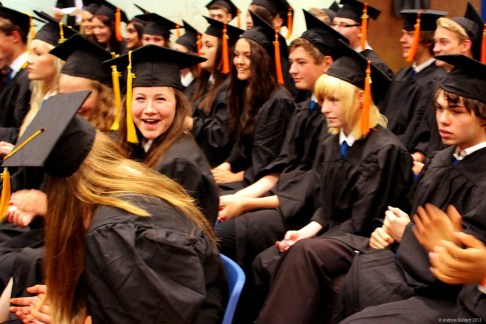 SMILES ALL ROUND: This Year 11 student seemed happy to be graduating. 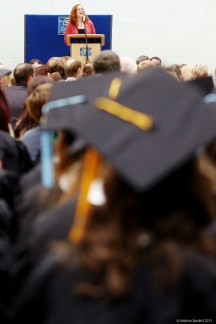 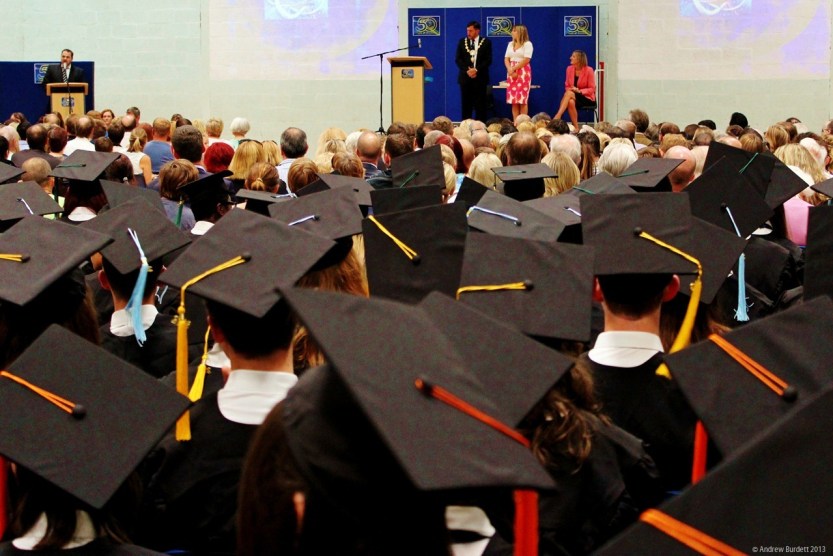 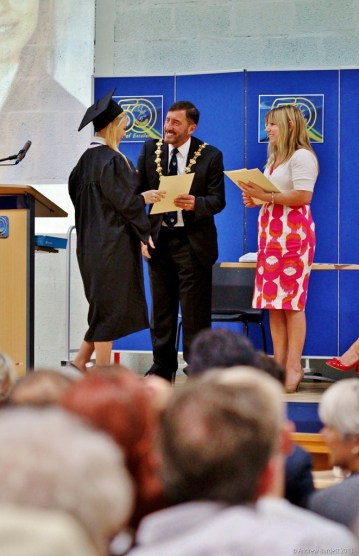 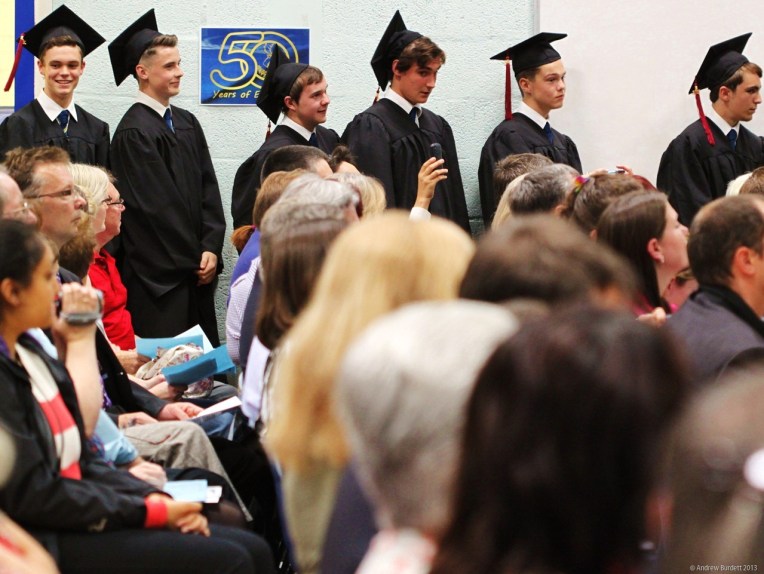 WAITING IN THE WINGS: The next set of ‘graduates’ wait for their names to be called. 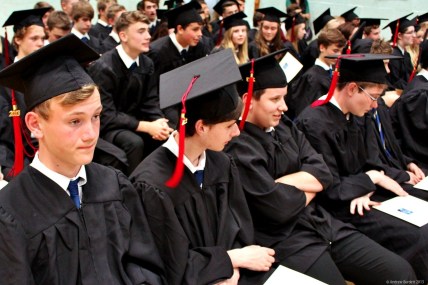 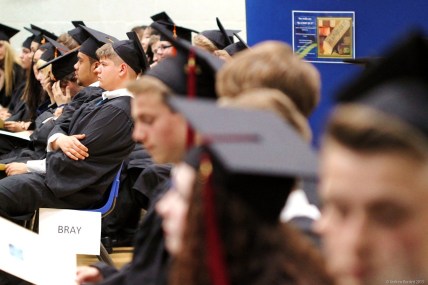 SITTING PRETTY: The heat of the room led some students to exhaustion, along with the fatigue finally catching up with students at the end of the exams season. 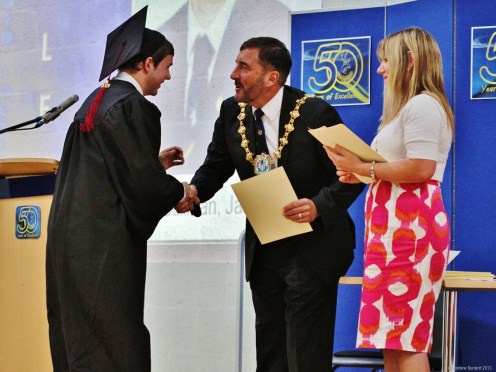 MADE IT AT LAST: Another Year 11 receives a certificate for completing their time at Furze Platt. 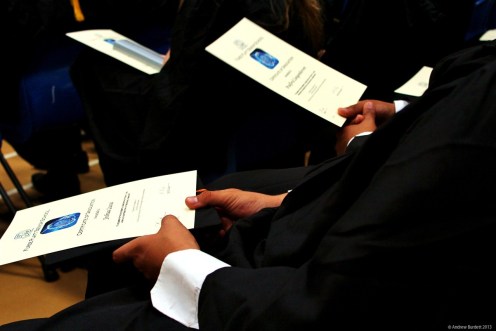 GOT THE CERTIFICATE TO PROVE IT: These Year 11s sit patiently with their certificates. 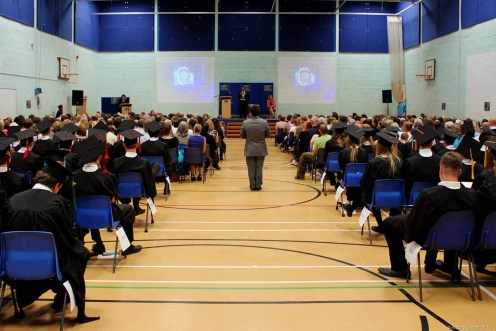 DOWN THE AISLE: Fellow photographer Lewis Bedwell was there to capture the moment too. 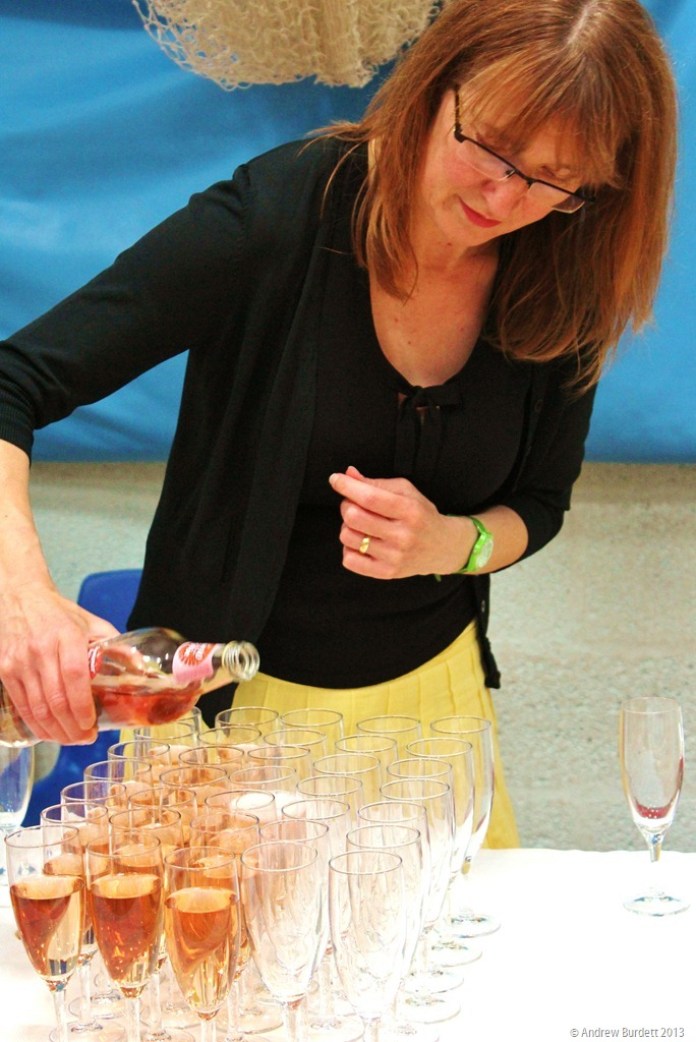 ALL THOSE GLASSES? POUR HER!: This volunteer helped with the mammoth task of preparing the refreshments. 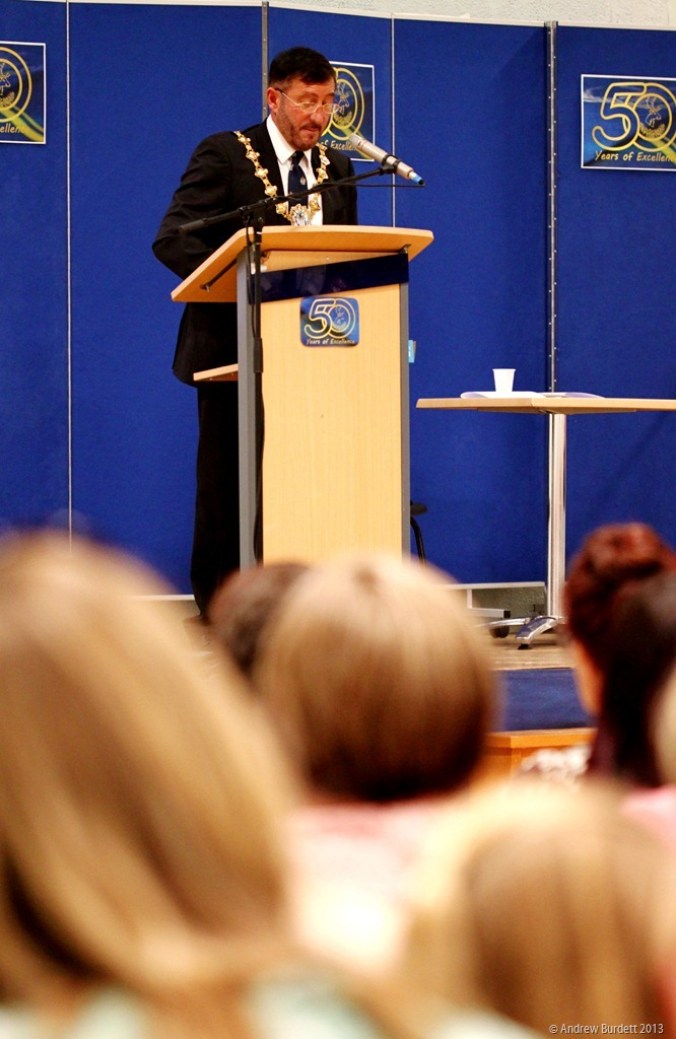 SHORT AND SWEET: Cllr Andrew Jenner spoke briefly about his fascinating life, and the biggest lessons he’s learnt in his time. 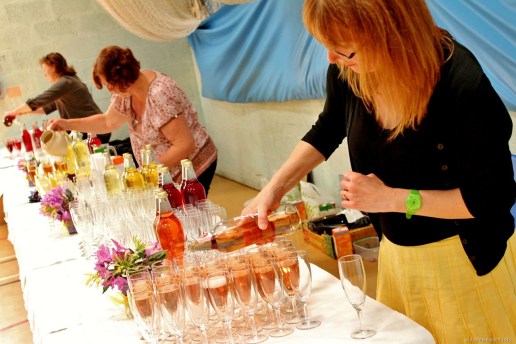 ALL THE WAY TO THE TOP: Drinks were aplenty. 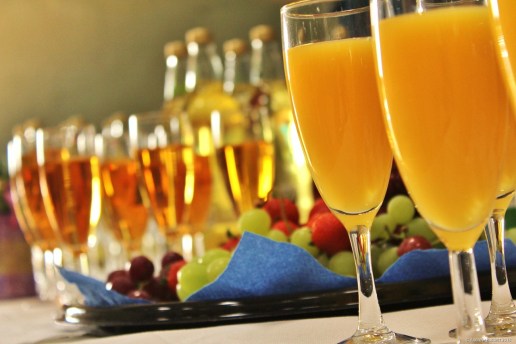 REFRESHING: These glasses quickly disappeared soon after this picture was taken. 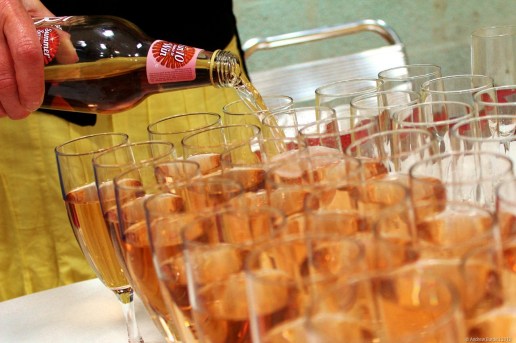 BRIMMING: Glasses were filled with Shloer, juice, and water, ready for parents and pupils to collect. 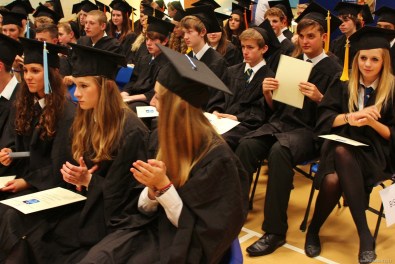 ALMOST THERE: All Year 11 students present sat patiently and attentively. 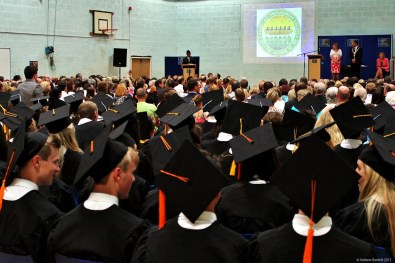 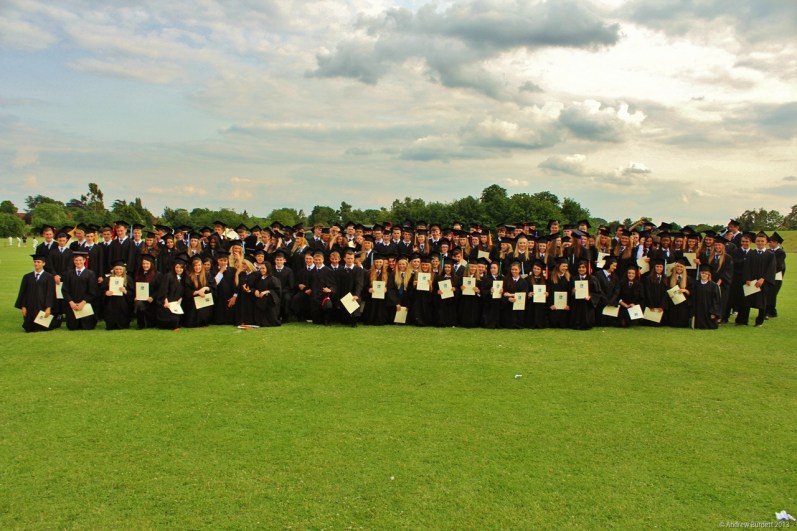 ALL TOGETHER NOW: Mr Bown asked me to take a group photograph… 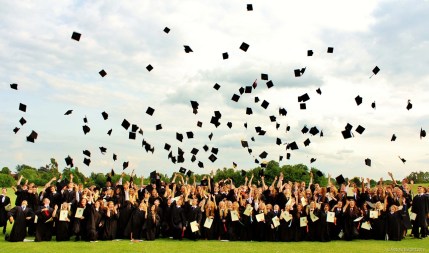 HATS IN THE AIR LIKE THEY JUST DON’T CARE: …before I cued Year 11 to throw their caps in the air. 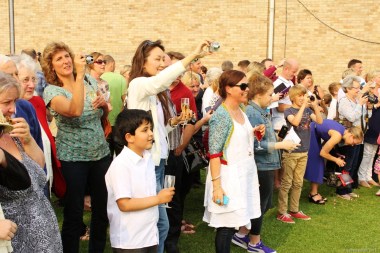 LOOKING ON: Parents enjoy the sight. 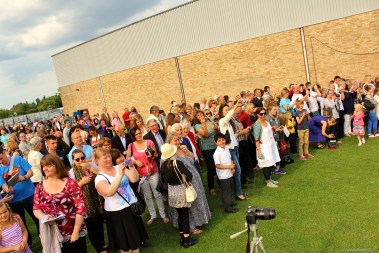 PROUD: Parents and friends stood behind my camera watched as the caps were thrown sky-high.

You can help support the school into the future by participating in the school’s Be A Part Of It campaign. For £30, you can buy a paving block – including two lines of inscription in gold lettering – to be laid in front of the new Mathematics block. Find out more about the scheme here, or click to download a form.