“Margaret Thatcher: 1925–2013”, led The Times, The Telegraph, and The Independent with rather more dignity. 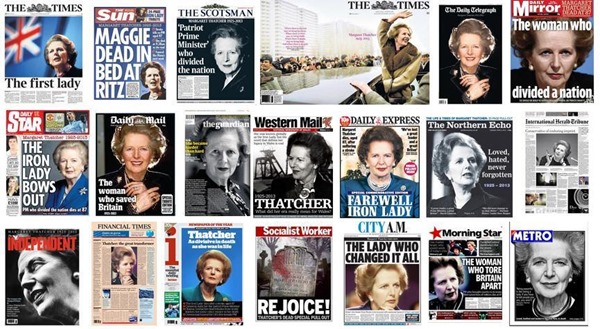 News last Monday of the death of the former British Prime Minister started it all: a week in which the public were accused of bad taste, broadcasters were accused of bias, and (in my opinion) the state massively overstepped the mark.

Above it all, one phrase was used over and over again:  that Baroness Thatcher is proving as divisive in death as she was in life.

What a poetic observation. And how witty. It’s all awfully clever.

But there’s something very unpleasant, I feel, about celebrating the death of somebody… anybody. Sure, she may have snatched the milk from a generation. And she may have ‘ripped the heart out of society’. Don’t mention the trade unions.

Ultimately, though, she did what she thought was right.

We can look back and question whether her ideas were really for the good of the nation. Some – many, perhaps – would argue strongly that they were not. Those who say that she changed the country for the better are met by those who say that she destroyed it forever. Either way, the undeniable fact is that, as leader of the Conservative Party, she won three General Elections – no small feat.

Days since her death have seen a resurgence in harsh comments from some of her toughest critics. Had she been alive and well, Mrs Thatcher would have been the first to respond to recent criticisms of her – indeed, in her time, she was, usually with steely conviction.

But in her final years, as her once-sharp mind fell victim to the hideous effects of dementia, she retreated to the privacy of being behind her own front door.

I think it speaks ill of our nation that Sunday’s Top 40 lists Ding! Dong! The Witch Is Dead as Number 2. 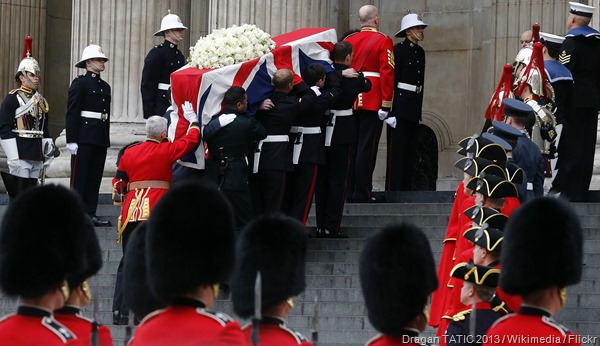 What speaks far better of Britain is our ability to stage pomp and circumstance. At a reported £10 million, Baroness Thatcher’s ceremonial funeral with military honours (which took place earlier today) did, admittedly, feel uncomfortably expensive. Fears were rife that the cortege would be intercepted or that the proceedings would be interrupted, while security was said to have been “stepped up” after the shocking bombings in Boston on Monday. 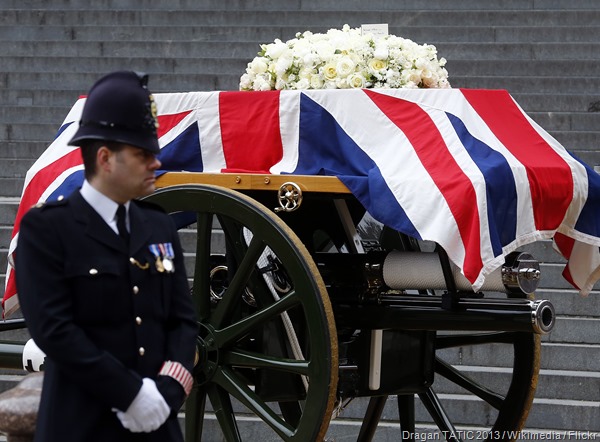 Yet, when it came to it, the few silent protesters were drowned out by the unprecedented, unexpected sound of applause. The crowd clapped as the gun-carriage (carrying the Union Flag-draped coffin) rolled by.

“Lying here, she is one of us, subject to the common destiny of all human beings.”

The woman who, in 1979, entered office as Britain’s first female Prime Minister left Downing Street in 1990 as the longest-serving incumbent of Number 10 ever.

Her remarkable journey from a Grantham grocer’s daughter to the most famous woman in politics has inspired and challenged in equal measure. Today, over twenty years since retiring from the Front Bench, she made one last journey – in dignity and in peace.