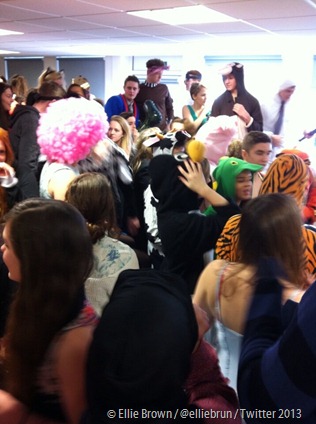 I wrote a post last month about filming our very own Furze Platt Sixth Form take on the popular Harlem Shake video phenomenon that is sweeping the web.

Here, just briefly, is how we did it.

We had a twenty-minute window to get the footage we needed. Given it was, after all, only going to result in 30 seconds’ worth of screen time, that may sound like a lot. It wasn’t. Not when you have to brief the scores of excitable participants, remove all clues of the mock-anarchy that is soon to descend on the common room, and politely explain to a teacher why it isn’t necessarily that easy to “honestly just really quickly” get a coffee from the machine right next to our camera. Factor in the need to fix a technical fault with the loudspeakers that would play the music track, and include also the time needed to get changed and reset for the second shot, and it becomes a miracle to think that we got what we needed in time.

I shan’t bore readers again by explaining how I wasn’t, initially, all that keen on the idea, which had been floated for a few days before it gained enough momentum to actually happen. That’s all covered in my earlier post, which you are, of course, free to read if you wish.

What I thought I would include in this entry is the reaction immediately after the video was posted. From those involved, whether behind the camera or in vision, the mood was one of great pride. This was our Sixth Form, in our school, doing our version of the video. There was no damage being done, no chairs being lobbed or people being jumped on (as one other nearby school’s edition depicted) – just smiles on the faces of young people having fun.

My ‘Furze Platt Schoolmates‘ Twitter list went wild, and the YouTube link that Jay (who cut the video) posted on Facebook attracted dozens of likes. Best of all, I have an inkling that it was my blogpost that directed journalists at the Advertiser to the video, and as a result we got a full-width nod in that week’s paper.

How the Maidenhead Advertiser reported on our Harlem Shake video. (Edition: 21 February 2013)

In a world in which spontaneity is increasingly hampered by risk assessment and bureaucracy, it was refreshing to see this video pulled off so successfully, so quickly.

Can't stop watching harlem shake by furzeplatt haha its so funny although.. Me as a tiger in the front makes me cringe..ew

Both desborough and furze platt have done a harlem shake video, probably time cg did one

Furze Platt sixth form's Harlem Shake shits on the others

Fp. Harlem shake. Well done you do us proud

I love my sixth form