I’m a great fan of Top Gear, but its India Special in 2011 was embarrassing to sit through. Happily, this year, it seems Andy Wilman and his team have redeemed themselves. 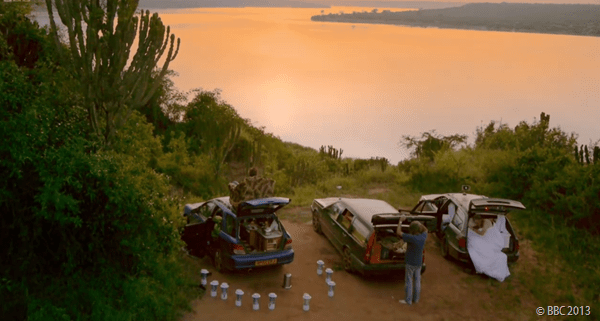 WATCH the trailer for the episode above. 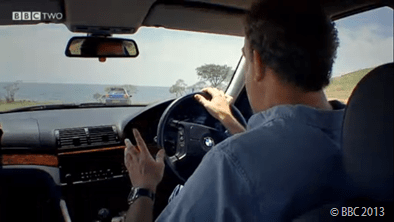 Jeremy Clarkson’s epic voiceover, hyping the gargantuan journey he and his fellow Top Gear presenters would be completing in this Africa Special to the source of the Nile, was cut short. “I’m sorry to interrupt myself, but I think we have a problem. Errm, we’ve found it”, he concluded, minutes into this first hour-long episode of two.

“This exploring is not as hard as I thought it would be.” 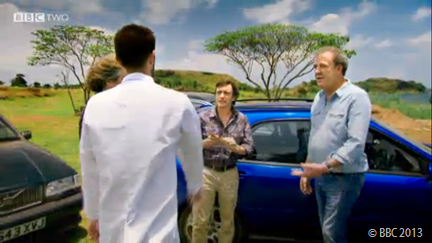 Staring at a vast expanse of water, all three – seemingly feeling rather smug – were met by one of the show’s lab-coated assistants (so familiar to regular viewers) holding an envelope. The message inside informed Richard Hammond, James May, and Clarkson that they had not completed the challenge in a record-time. No, what they’d actually found was Lake Victoria – the 26,600 sq mile Great Lake first sighted by British explorer John Hanning Speke in 1858. Long-disputed as the true source of the Nile, Lake Victoria is now widely-believed to be fed by many a minor river – one of which leads to the first trickle of the Nile. “Even today in 2012,” Hammond read, “experts have not been able to determine which it is. You will.” 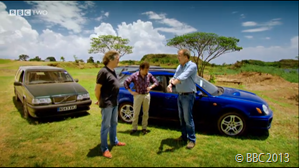 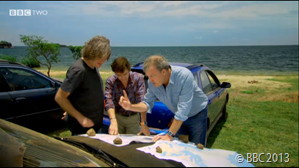 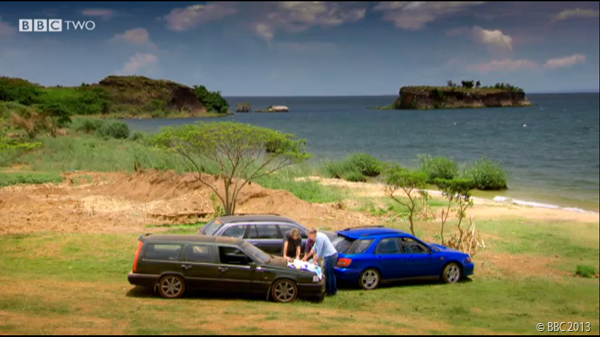 And so the expedition began. 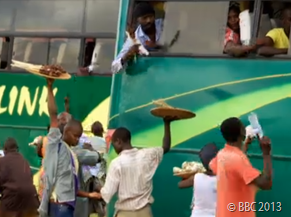 The first part of the episode was all a bit Michael Palin, showing the food and flavours of Uganda, as street sellers offered their produce to passing travellers. I liked it, but no doubt the lack of focus on the vehicles will enrage some of the programme’s more petrol-headed audience.

Still, those viewers can’t exactly blame the producers. It’s difficult to do a road-test when you’re stuck in traffic that makes the M25 rush-hour on a Friday look like Silverstone on race-day. 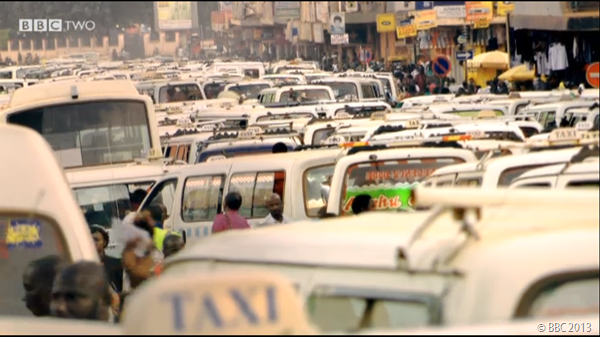 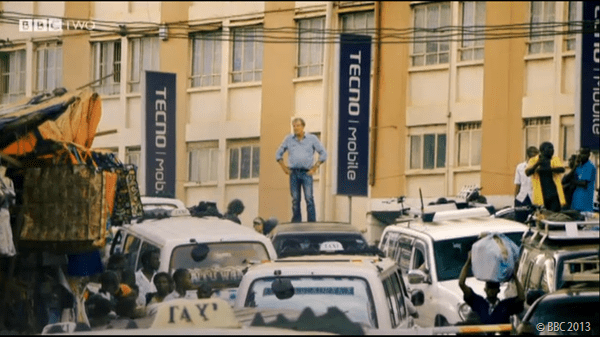 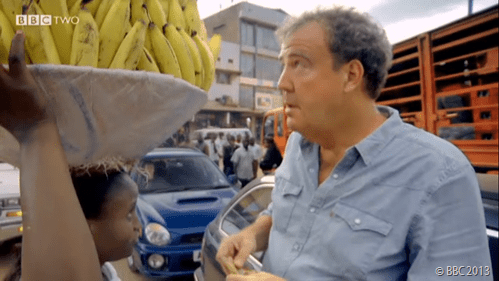 Whilst in the enormous traffic jam, there was a wonderful scene in which Jeremy got out of his car and accidentally bought a banana-girl’s entire day’s stock, after waving a banknote at her, completely unaware of the exchange rate. “Christ almighty, bloody hell,” he cried, taking the weight of the bananas he’d just purchased. As he winced, holding the piled-high bowl in his arms, it left me with astonishment as to how the much shorter local managed with such a heavy weight on her head all day, every day. 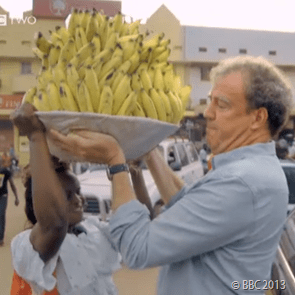 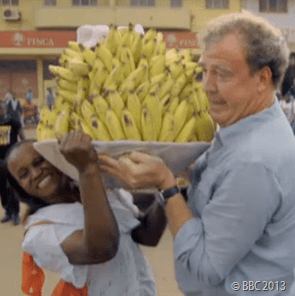 “How the hell do you do that?”, Jeremy asked the seller, reflecting the thoughts of viewers across the West. 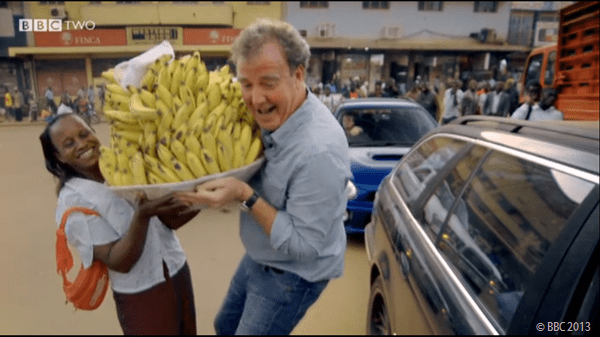 Stunning time-lapse footage advanced us into the next day, though the queues continued. “It wasn’t a dream. I’m still here.”, an unshaven and tired-looking May stated. 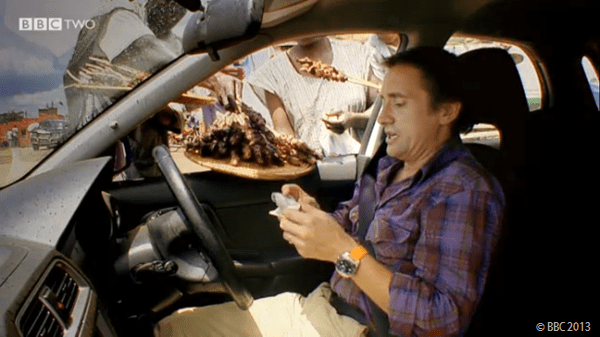 Breakfast was delivered to the presenters’ cars like room service in a hotel – but the actual hotel the trio eventually found that night proved to be less than first-class. 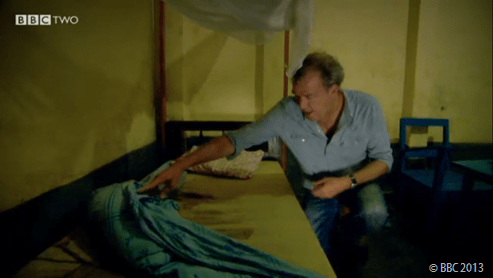 “I don’t see anyone coming out to help with our luggage”, Clarkson moaned, as the three presenters pulled up at the rain-soaked ‘Economic Lodge’. “JEEZUS”, he whispered with disbelief, looking at the sodden hammock and excrement-covered mattress that formed his choice of bed for the night.

Thus, the next morning, Hammond declared he’d had a good idea. And, unlike old, brash, silly Top Gear, this one seemed really quite sensible. “We’ve all three got estate cars, yeah? Why don’t we sleep in the cars?”

The three presenters then set about modifying their cars to make them appropriate as both vehicles and homes. Alongside his bed, Hammond built a kitchen in his Subaru car-boot, so that he could cook for his fellow presenters (although, in practice, he turned out to have somewhat a lack of culinary skills, managing only to warm up beans for his colleagues). 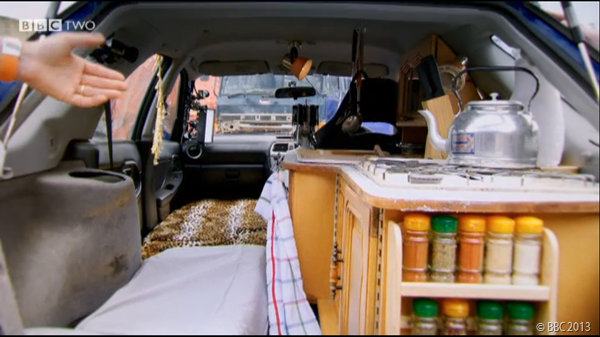 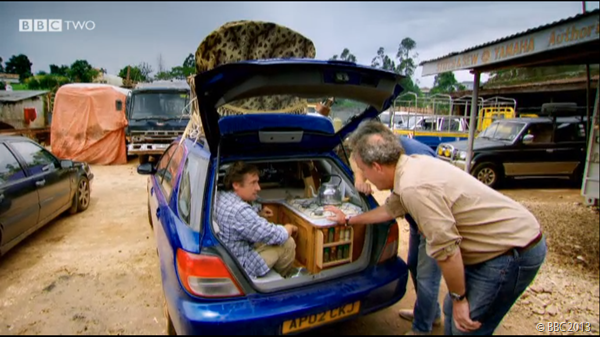 James May, meanwhile, next to his camp-bed created “a gentleman explorer’s quarters”, with a globe, maps, and a telescope. Clarkson, though, was quick to dismiss May’s ingenuity. “It’s a library, James,” he insisted. “Things you don’t need when you’re looking for the source of the Nile. Number one: library…”. Eventually, though, it was reasoned that James would be able to consult his wealth of texts in his ‘library’ and fix bits of the respective cars in his fully-equipped workshop, should the need arise. 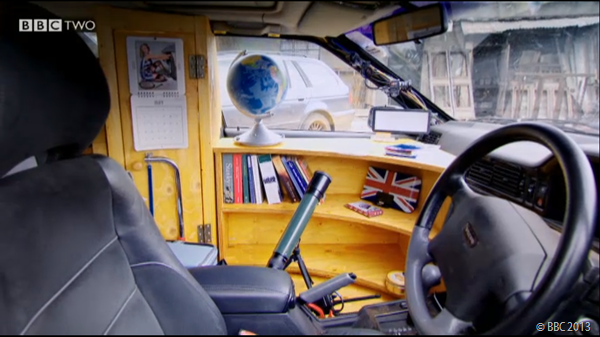 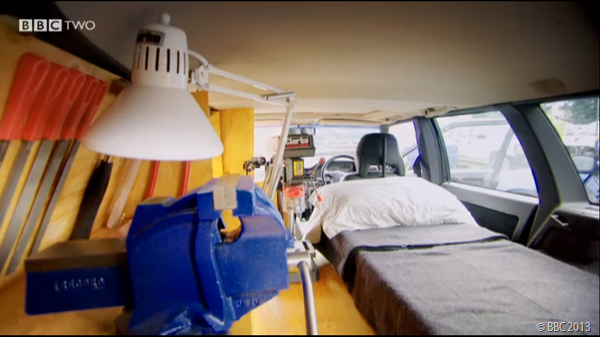 Of course, Jeremy’s changes to his car were wonderfully self-centred as ever. Opening his BMW’s boot revealed Egyptian cotton bed linen making for a very appealing ‘cot’. But his fellow presenters’ preconceptions that he’d acted extremely selfishly were silenced when he showed them a beer-filled fridge in place of his passenger seat. 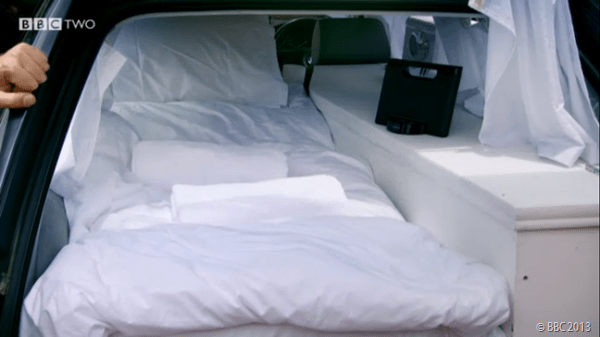 Needless to say, there were a few of the exhausted visual gags of bits of car falling off (especially those bits that they’d just put in with their ‘refurbishments’). But, that said, there weren’t so many that it was uncomfortable to watch. In fact, it was lovely to see a splash of the usual teasing of each other present in this episode. Referring to the Top Gear camera crew’s inability to film animals as well as they do cars – and Hammond’s apparently great ability to spot wildlife – Jezza joked it was much like his colleague’s much-criticised television 2012 series.

JM: “Was it ‘Richard Hammond coming to you from a tent in the dark‘? Was it that one?”

JC: “There was a little man and he kept saying, ‘I’ve had an amazing day, I’ve seen lots of animals, but sadly this is live and it’s dark now.'” 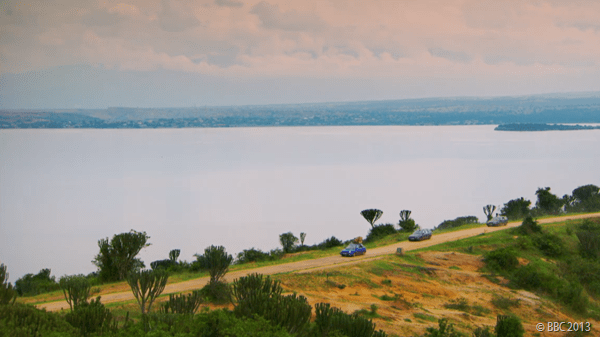 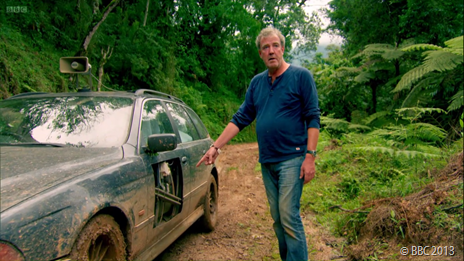 The rest of the episode comprised of the usual mix of brilliant photography, an awesome soundtrack, and great commentary from ‘the boys’. May was shown to be in agony from his back, met by Clarkson’s sympathetic: “Our colleague was in considerable pain. So we left him behind.” May’s revenge? Cutting a square in Clarkson’s car-door and using it to fashion a protective skid-plate, to replace the one that had fallen off his vehicle earlier in the journey. (Clarkson appeared visibly angry when he realised what had happened.) 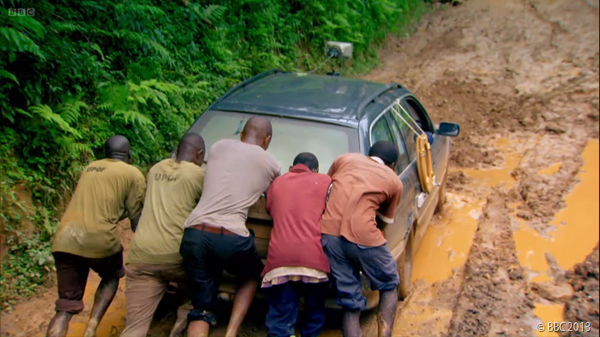 “Speed and power”, Clarkson was forced to admit before his laughing colleagues, only lodged his heavy BMW further into the thick mud on one especially hideous road. The Ugandan Army came to Jezza’s rescue and (promised a good wage) helped him out, congratulated – when they finally succeeded – by a huge cheer from the massive TG production team. (On that note, it’s easy to forget quite how many people are involved in producing an episode such as this, although the queue for Jeremy’s car loo did give viewers an idea of the crew’s size.) 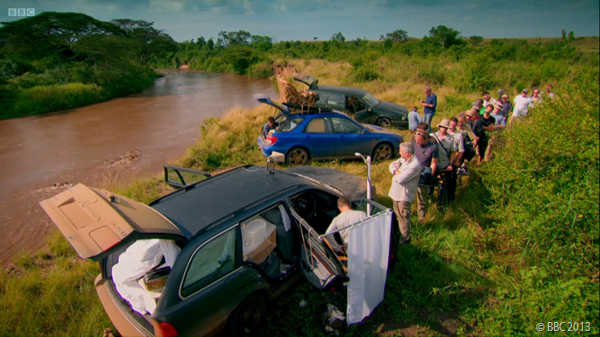 As the episode drew to a close, the route changed, meaning the men would have to travel half-way round Lake Victoria to reach what they now thought was the source of the Nile. 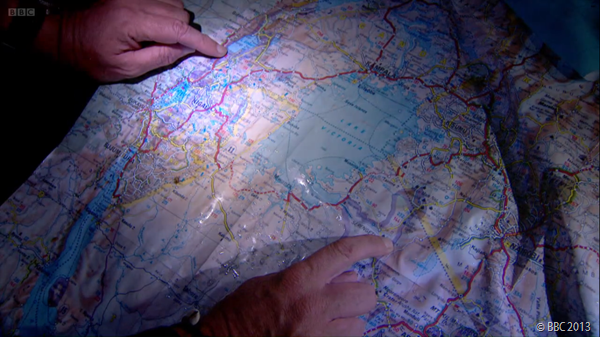 With 500 miles to go, next week’s Part Two looks set to be just as brilliant as this week’s edition. It was really great television: interesting and entertaining, humourous and enjoyable. I was, at first, quite concerned that two hours of ‘cocking about’ could become immensely tiring to watch, but it seems that the team have changed their game slightly. Hammond isn’t endlessly crashing into the others’ rear-bumpers, Clarkson isn’t being overtly racist or rude, May isn’t being pedantically slow and boring.

As the producer explains on his blog, this Africa special was never meant to happen as it has, and was originally going to be just a one-hour Christmas special. It’s now March and this first episode of two was only finished on Friday night. Far removed from the heavily-scripted, ridiculous India episode, for this one they “didn’t plan as much, instead just [let] things unfold”.

Personally, I think the gamble’s paid off – and the extra hours of polishing in the edit seem to have been wisely-invested.