The current season of weekly Seniores seminars – “interesting talks by interesting people about interesting things” – is coming to an end, but that doesn’t mean the quality of the speakers is beginning to dwindle. Quite the opposite, as Rt Hon Theresa May, MP for Maidenhead and UK Home Secretary, last month approached the school to ask to talk about her work, and this afternoon spoke to a 70-strong audience of Furze Platt students and teachers. 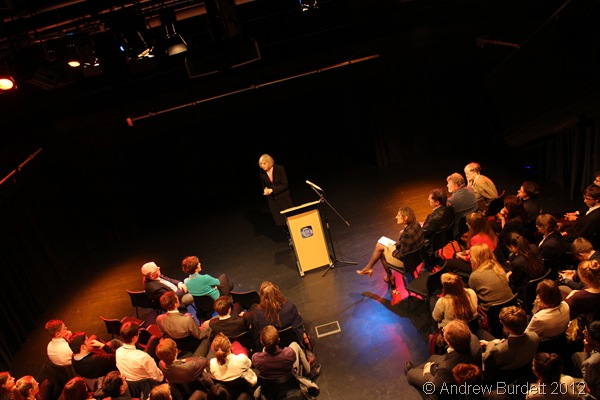 On last Friday’s PM programme, Theresa May was asked where the Australian-jungle ‘holidaymaker’ Nadine Dorries would rank on her Christmas card list this year. After a brief moment of laughter, Mrs May simply replied that, whatever her views on her fellow Conservative MP, the Christmas card she’ll be sending will have been designed by a child in her constituency.

“Forget your constituents at your peril”, she tells me, when I ask her about keeping a balance between being the Home Secretary and representing the views of the people Maidenhead. “Lose their support and you’ll lose their vote too.” She goes on to explain that even now she holds one of the four Great Offices of State, she still finds it important to “get out in the constituency” and “knock on doors” when she can. “Not only do your constituents have views that need representing, but they also provide feedback on what you’re already doing.” 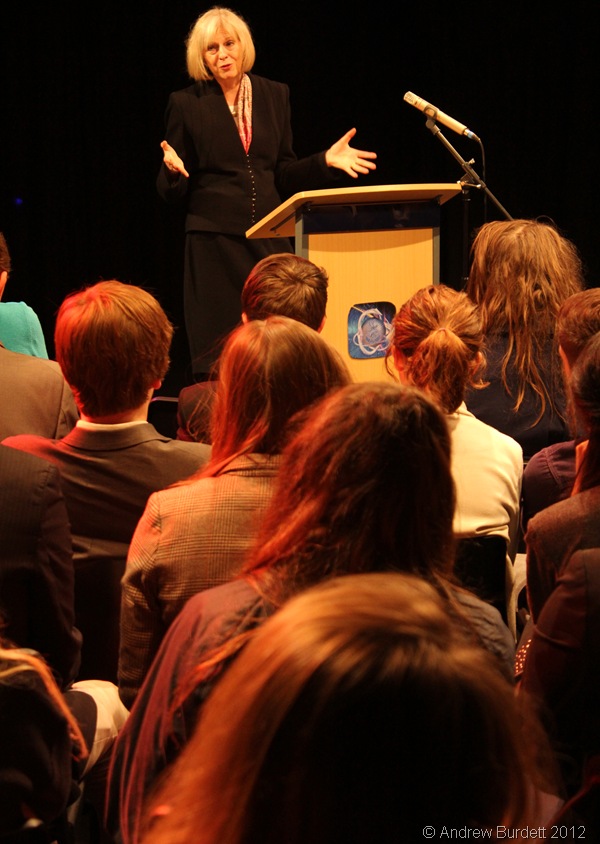 Her talk begins at 3:45pm, when she opens by announcing she’s always been interested in politics and current affairs. The daughter of an Eastbourne vicar, she grew up in an environment where public service was delivered through public speaking. “I knew when I was a young teenager that I wanted to be an MP, and joined the debating society set up at my school.”, she tells us. “We each picked out of a hat a subject to argue in favour or against. The piece of paper I chose read ‘Should school uniforms be abolished?’, and I looked at it and just couldn’t think of anything to say – not the best start to a career in politics!”

“I hope, though, that I’ve got a little better since then.”

Her first try at politics was when she stood as a local councillor in the London Borough of Merton for six years, something “worthwhile in its own right”. “You’re dealing in microcosm with the dealings of Parliament,” where she would eventually end up becoming a front-bencher. 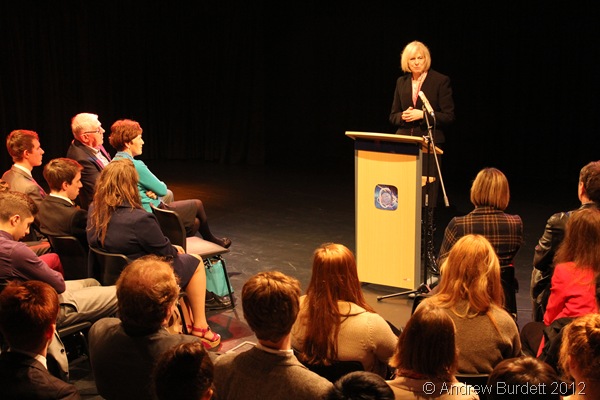 Before mentioning the Personal Protection Officers who guard her every day – and confessing to having not driven anywhere for the last two-and-a-half years – Mrs May is quick to point out that most of her time in politics has been rather unglamorous.

“There’s an awful lot of people who want to be an MP. Going and doing grudge work, like stuffing envelopes, gives you a good idea of whether you really want to stick at it.”

She explains that new recruits are often first expected to “fight a campaign you will not win”, by standing for election in a rival’s safe-seat. “Even though everyone’s saying you will not win, you always think you might just take a majority. It gives you experience, possibly prepares you for failure, but certainly proves your ability to lead a campaign largely on your own.” Indeed, in 1992, Theresa May stood as the Conservative candidate for North West Durham, a constituency whose electorate predominantly live in former mining or steel towns. She lost. “The people of the north were very friendly and kind,” she insists, “they just didn’t actually vote for me on Election Day.”

On the subject of campaigning, May states that “three weeks of knocking on doors morning, noon, and night” is “extremely physically demanding”. “I always wonder how American would-be-Presidents do it; the mileage covered is amazing, and it’s over a much longer period.” 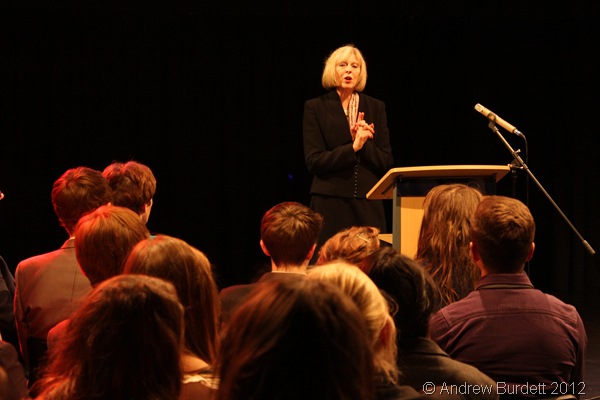 Her second attempt at getting a seat on the green benches came as somewhat of a surprise, in the 1994 Barking by-election, following the death of long-serving Labour MP Jo Richardson. She came only third, behind the Liberal Democrat candidate and over 10,000 votes behind the replaced Labour representative.

Then, in 1997, in a year when nationally the Conservatives lost 178 seats, Mrs May became the first Member of Parliament for the newly-created constituency of Maidenhead. “There was a strange atmosphere, because I’d won but there’d been such a loss for the Conservative Party. I think it’s easier if your first term is, like mine was, when you’re in opposition.”

She moves on to her 2010 victory, and tells of how she waited by the telephone, conjuring imagery resembling that of the opening scenes in the first episode of Yes Minister. “I was called to Downing Street to meet with David, and as I left somebody said: ‘Home Secretary, your Protection Team are now ready for you.'” She recounts a second-hand tale of how Jack Straw’s wife, soon after her husband lost his ministry, realised she needed a few items from Tesco. “That’s alright, I’ll just ring for the Team to get them,” Jack Straw said, before remembering that he no longer had the services of such officers to fulfil the favour. “You can get too used to the Team.”, Theresa May admits. 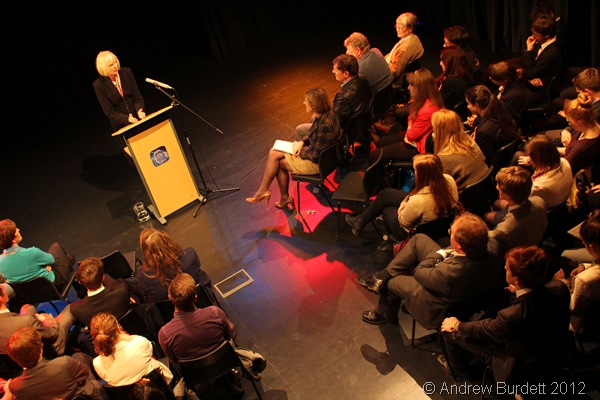 Another of the major changes that came with being given the role of Home Secretary was the “notorious red boxes”. “Every night, I get a stack of papers, each of which requires decisions that need to be carefully made. Some choose to stay up late into the night to get through the work, others get up early in the morning.”

“Our work for policy change in the Home Office takes a lot longer than you think it should, especially if it involves a change to legislation.” One example of this is the recent introduction of Police and Crime Commissioners, part of “ongoing” police reform outlined since 2010, also involving establishing a “Police and Crime Agency to deal with online crime, child exploitation, and creating a College of Policing.”

Explaining the delay, she states: “It’s important to gain real knowledge and research in what works in policing before implementing new policy. All of that takes time. It’s the first thing you learn when you become a minister – how long it will take to put things in place.”

“We’ve cut red tape, got rid of targets, and left just one aim: for police to cut crime.”

“The name ‘localism’ has been attached to it. That’s one of the themes from government at the moment.” 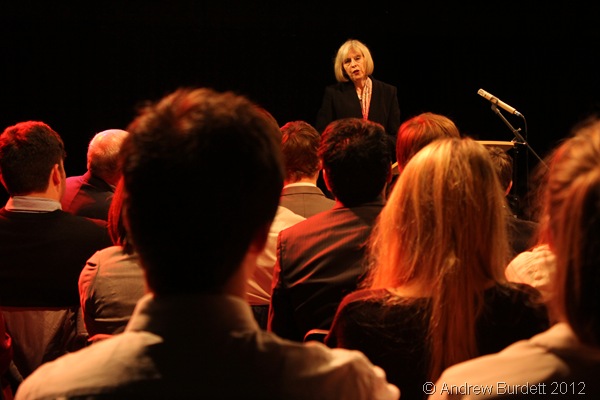 Her forty-five-minute talk comes to an end, and moves on to an engaging question-and-answer session. Fellow students ask about topics ranging from ‘Mad Nad’ (“I was always clear that I thought Nadine should have been in her constituency…”) and Abu Qatada (“First and foremost, I want to have Qatada exported as quickly as possible…”), with seemingly well-rehearsed answers delivered directly to my fellow students’ eyes.

My question, though, about the importance of her constituency, receives a perhaps unnecessary answer. It’s obvious through her generosity with her time, coming to stand before students in the very room she opened twelve months earlier, that half-way through her term as Home Secretary her constituents are just as important to her as ever. 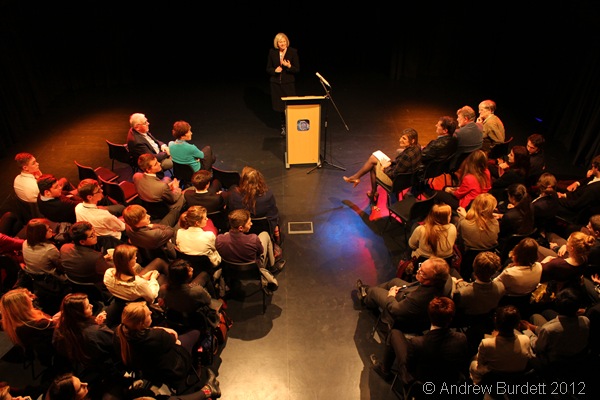