I was delighted to be nominated to receive a Subject Prize at my school’s annual Celebration Evening this year – but slightly baffled as to ‘Why me?’. You see, of the eleven subjects I was examined in last summer, it was German for which I was singled out. 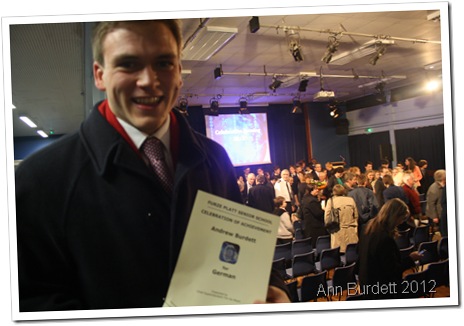 Anyone reading must first appreciate the fact that I’m not wishing to display any lack of gratitude – I know how fortunate and privileged I am to receive any award at the prestigious event. But German was not one of the small number of subjects I attained A*s in, nor was it one of the ones that I enjoyed studying the most. The lessons themselves were well-structured and fun – I’ve fond memories of our ‘Body Parts’ lesson, when we labelled such features as ‘große Nase‘ on my good friend Oli Palmer – but I really, really disliked the assessments.

It’s not just the fact that I – someone who’s hardly a born-linguist – found them difficult: it’s the relentlessness of it all. We had to submit two Speaking and two Writing pieces of coursework over the course of the two GCSE years, but actually completed several more than the required four tests. This allowed us to choose our best ones and have those formally reviewed by the examining board, so that we would receive the highest possible overall grade at the end of the course.

The only way I could guarantee I’d do my best in the Writings was to devote the week before each exam to memorising vast chunks of text. Whether I was on the train to London, on countryside rambles, or even in the bath, I’d look-cover-write-check my way through the hundreds of foreign words paying sharp attention to word-order, gender, and noun-capitalisation.

Speaking assessments (in which I was required to have a recorded conversation with my teacher about a pre-agreed subject) were more difficult, due to the need for the discussion to sound fluid and unrehearsed; the presence of surprise ‘extra questions’ thrown in throughout the talk; and the fact that – unlike the Writings – I only had a few minutes, rather than a whole hour, to recall the points I’d thought about in advance.

I still slightly regret burying my nose so deep in my notes that I was unable to really enjoy a weekend in Bristol with a dear family friend last year – but I was at least rewarded with decent marks in the assessment that followed. As a result, after all that work, I was understandably disappointed when my teacher advised me to only enter for Foundation Tier in the Listening paper. It seemed that all those hours of revision – and similar number of hours of Mum’s patience as I recited my ‘scripts’ to her – would be wasted, because 25% of the final course break-down was being capped to a maximum grade of a C.

Fortunately, as it turns out, my brilliant teacher did indeed know best. I scored near full-marks in the June Listening exam, and did relatively well on the Higher Tier Reading paper (the last exam of all those that I sat in the summer). As a result, my final overall grade was an A – totally unexpected, and a real delight to see when I opened the dreaded brown envelope.

Perhaps, then, tonight’s certificate is meant to reward struggle and determination rather than outstanding academic achievement. 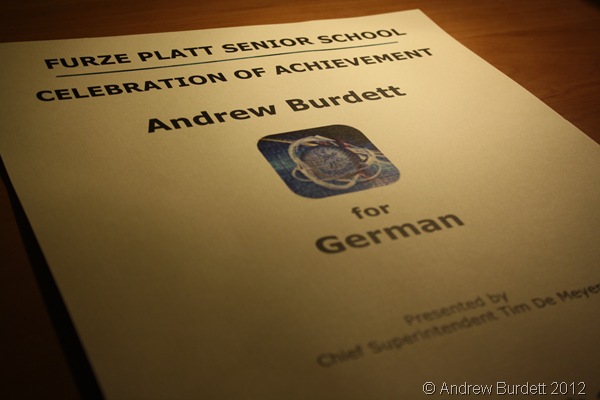 The prizes (vouchers summing roughly £1,000, kindly donated by the PTFA) were handed out by Chief Superintendent Tim De Meyer, who later delivered an excellent keynote speech about how a culmination of skills and talent is required for a Police investigation.

“In one nasty case I saw when I worked in London, thieves had preyed on the vulnerability of one elderly lady. She didn’t speak very good English, though, so Police linguists were required to help her prepare a statement of what had happened. Scientists lifted finger-prints from surfaces and examined DNA left on a discarded cigarette-butt. Computer specialists traced the suspects’ mobile phone signals, and concluded that they had been in the local area at the time.

Interests in these vital areas were all probably once honed in schools like this one.”

Musical entertainment was provided by the brilliant Year 10 pianist Andy Barr, by Year 13 classical guitarist Lois Brown, and by the jazz-quartet in which my beloved friend Lorna Young is a member.

Headteacher Ms White spoke eloquently as she began the evening, but most of the rest of the presenting was done by Sixth-Formers including House Captains and the Head Boy and Head Girl. Mrs Le Page, Chair of the Governors, proposed an expression of thanks before a much-updated version of my 2010 award-winning ‘Celebration film’ was shown at the end of the formalities.

The evening closed at around 8:15pm, at which point those in attendance began their journeys home – some alumni had come from as far as Yorkshire to receive awards, while other current pupils (myself included) only had to make the rather shorter distance back up the hill!