Back after a half-term break, tonight saw the return of Furze Platt’s Seniores programme (a series of weekly ‘interesting talks by interesting people about interesting things’). Dominic Hurst, a senior producer at BBC News, was one of the most eagerly-awaited speakers. 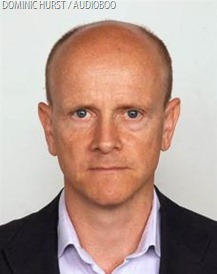 If I’m honest, this is the big one for me; the one I’ve been most looking forward to. As a news junkie, I’ve followed Dominic on Twitter for years, and have loved reading his tweets while he’s been working ‘out in the field’ – whether he be in the heat of the London riots, or with Welsh search and rescue teams looking for the body of April Jones. He has, I think, a fascinating job – unpleasant at times, highly enviable at others, but always extremely exciting.

His talk – entitled The Media And Its Role Within Society – could hardly be being given at a more appropriate time. “Currently, the two biggest media organisations in the UK are under investigation,” he begins, “News International and the BBC. One is being investigated because of the methods by which it obtained its stories, the other for not actually running certain stories.” He’s referring, of course, to the phone-hacking scandal (around which Lord Justice Leveson’s soon-to-be-published report is centred) and to the dropped Newsnight film about the Jimmy Savile child abuse allegations.

He’s open-collared, still wearing his BBC security pass, and oscillating between the two sides of the study room in which nearly thirty fellow Sixth-Formers have turned out to hear his talk. 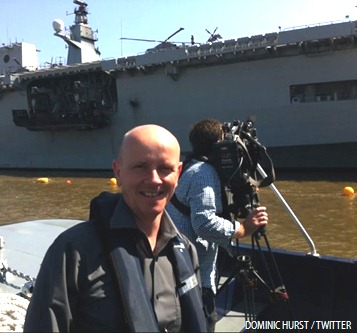 “The thing about Savile is that he used his celebrity to hide his actions. I believe absolutely the terrible things that it’s said he did – what’s not clear is why that Newsnight investigation was shelved.”

Dominic explains that Nick Pollard, a former executive at Sky News, is today starting his BBC-funded inquiry into what editorial decisions were made at the Corporation that prompted the near-complete item to be scrapped, and who knew what about why.

“What every news-provider relies on is the trust of its consumer,” Hurst explained. “As soon as that trust goes, the provider can no longer survive. Three days after the News Of The World was found to have hacked the dead schoolgirl Milly Dowler’s phone, the paper had lost the trust of its readers, and James Murdoch realised he had no option but to shut it down.” Hurst continued: “The only way the BBC can retain the trust of its own consumers is to find out exactly why the Newsnight investigation was shelved – and that it’s doing with the Pollard Review.”

In a quick survey, Dominic asks us how we get our news updates. A few (myself included) raise our hands to indicate that we read national newspapers every day, about half of us state that we regularly watch or listen to television or radio bulletins, but (as is widely expected) virtually every arm is extended high when the internet is mentioned.