For me, it’s the last day of the camp, and I’m excited about going home and repacking for the Berkshire Scouts Aragon expedition. But I also develop a sense of poignancy about leaving the place I’d had so much fun. (This is the seventh and final instalment: you can read about Saturday, Sunday, Monday, Tuesday, Wednesday, and Thursday by following the links.)

As I’d been expecting, it was not the best night’s sleep ever. I woke up in the middle of the night three or four times, and by the time morning came, I was absolutely desperate to spend a penny. Keeping the leg as straight as I could, under “doctor’s orders”, I rolled out of my sleeping bag, awkwardly unzipped the tent door, and hobbled over to a bush. What relief!

I was still wearing the same pair of shorts I’d effectively worn all week, and though they weren’t especially smelly, they certainly weren’t clean. I decided that, in light of the fact I was to be travelling home on public transport just after lunchtime, I would put on a completely fresh set of clothes – I wanted to ensure that I would go home looking clean and respectable, rather than in the somewhat trampish state I was in at the time. After changing, I was able to finalise my packing and move my bags – consisting of my large holdall, a decent-sized day-sack, and (unlike when I set off) a vast rubble-sack fully of dirty laundry – to Graham’s car-boot.

For breakfast, we had pancakes again, but after Josh and I accidentally used up all of the jam the night before, we made do with a simple sugar filling. 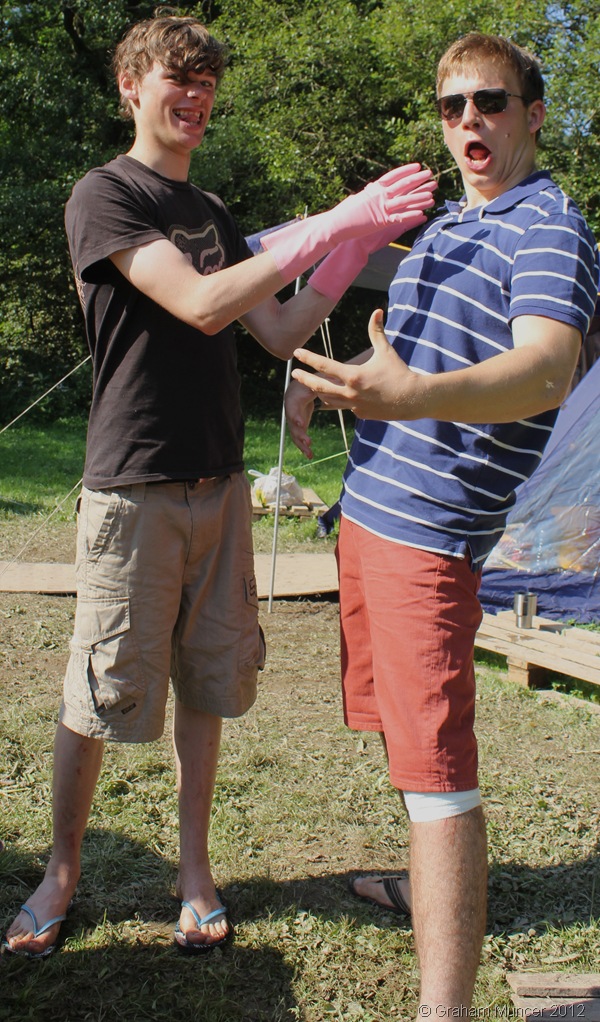 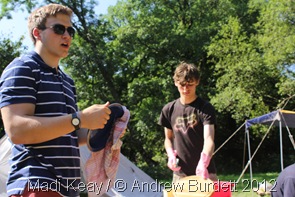 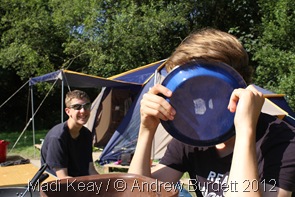 Taking advantage of the dry weather, Josh and I collapsed the tent we’d shared, meaning there’d be one less thing for the unit to pack up when they left the site the next morning. Josh agreed to share his brother Ed’s tent (as he’d very originally planned to), but in fact the team would later put away the majority of the hike tents and sleep under the stars.

Under the sun’s warming rays, as we all neared the end of the camp, the unit lay down on the grass (something that would have been unimaginable during the boggy conditions of just a few days prior). For only the second time, the washing line seemed to be serving its purpose: that is to dry clothes, rather than expose anything potentially hanging on it to more rain and dampness.

As much unit kit (the likes of the pots, pans, and gas rings) as possible was packed into the minibus ahead of the group’s departure in 24 hours. Graham discussed at lunchtime barbecue favourites, with a view to buy sausages, burgers, and chicken drumsticks for a last-night grill sizzle on the altar fires, knowing that would save washing up.

At 1:10pm, I was dropped off at Barnstaple Railway Station, as my time on the camp came to an end. With my funny knee, Graham was reluctant to let me carry three bags, insisting that I’d be better off letting them take at least one home for me. But I was insistent to take everything home myself, so that I knew I’d have all I’d need to pack for the exciting County Scout trip to Aragon (the lorry carrying personal kit was to set off at lunchtime the next day – a day before the participants themselves were to depart – so this was the final deadline for getting my kit cleaned and repacked).

I said at the beginning of the week, when the rain was pouring down and the ground on which I trod squelched with every footstep that “I just want to go home”.

But as the campsite basked in glorious sunshine and we enjoyed the baking heat, I felt a certain sadness with leaving. The group waved me off as we drove out of the gates (Danni and Madi were in Graham’s car with me) and we headed for the station. 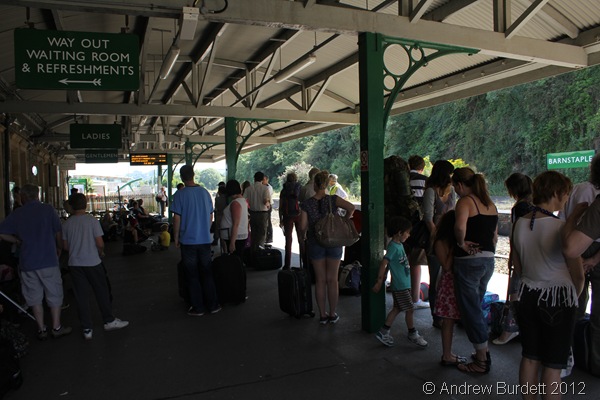 It is the most English of terminuses – just like the ones of days of old: a station master’s cafe, a grand ticket hall, recently reintroduced heritage signage. A station master who helpfully climbs aboard the train to raise attention to, and reunite with their rightful owners, discarded items left on the platform.

The idyllic, verdant countryside silently rolled by; hill and trees and grass – green, green grass. None of the brown, thick mud which, in its deception, cost me dear. Fields of gold, though, with crop beginning to be harvested. The most wonderful of journeys, with Elgar in my ears and my journal in my hand. I was leaving Devon exactly as I’d hoped to arrive: under a blue sky, in dry air, and in true warmth.

Sure, I may have soaked my boots, blistered my feet, and ruined my knee. Sure, a pair of my flip-flops may now be buried under a foot of sodden North Devonshire mire, unlikely to ever be seen again. But none of that matters: I’ve had such tremendous fun, thanks to the hard work of the leaders and the great friendship of my fellow campers – especially Josh, Ed, and, of course, Madi, with whom I shared late-night excursions that were a highlight of the trip. It’s such a shame that Danni and Matt never joined us on any of these, but I respect enormously the huge contributions they both made to the team as a whole.

I’ve loved (almost) every minute, from cooking breakfast to our secret midnight-picnics.

Goodbye Devon, and thank you. 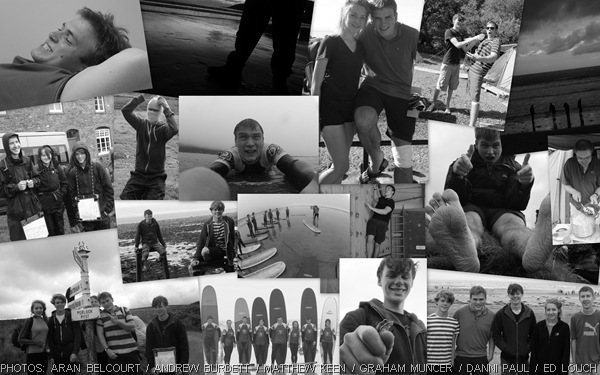 I never made it to Aragon. In my heart of hearts, I knew it was a pretty stupid idea to go on an adventure holiday where, by being so restricted in what I could do with my leg, I could have no real adventure at all. My parents took a surprising amount of persuasion to convince that it was best I didn’t go – I guess because I hadn’t really told them or shown them the extent of the damage – but when I saw a member of the medical staff at Slough Walk-In Centre on the Sunday (12 August) morning, they were pretty surprised no one in Barnstaple had expressed any doubt over whether I could go.

Since then I’ve bathed every day with my left leg wrapped in a kind of bin-bag and massive plastic ‘sock’, supposedly to keep the water out of the wound but in fact only having limited success. I went on Monday, 20 August to have the stitches removed, but after taking out five of them, the nurse left the remaining four as the wound hadn’t healed enough to permit their unsewing. Over two weeks on from the accident, and my body has narrowed the gap incredibly well – but I’ll be left with a scar for my lifetime.

Once again, though, I really must thank our leaders Graham, Aran, and Alex,  for making the camp so very enjoyable.

One thing’s for sure: I’ll never forget the week I spent in North Devon. All I need do to remember it is look down at my unwanted souvenir, and remember the pain, excitement, but above all the laughter of the seven days at the start of the August of 2012.