Now ever so slightly nearer the end of the camp than the beginning, the Dragons Explorer Unit start Day Five looking forward to the surfing lesson scheduled for 2:00pm. The day gets better still, with an evening spent in Lynmouth – and Josh, Ed, and I find ourselves with just eight minutes to get down the hill from Lynton, risking missing the minibus if we’re late.

(This is the fifth instalment, and the only one to feature a specially-produced video. That said, you can enjoy great text and photographic coverage of Saturday, Sunday, Monday, and Tuesday by following the links.)

Wednesday was set to be the first true day of gorgeous weather. The precipitation of the earlier part of the week would stop, and the final days of the camp would bask in sunshine. This was all good news, as Wednesday was the day of our eagerly-anticipated ‘beach day’, with time on the sand, a surfing lesson, and a fish-and-chips dinner. 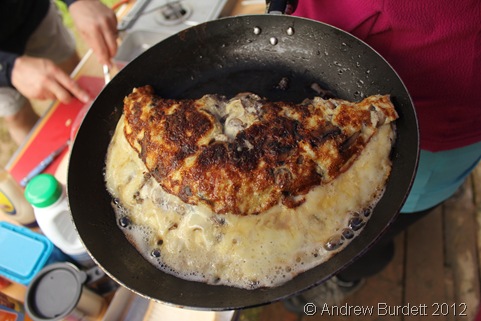 Disappointingly, we were all rudely awoken from our lazy lie-in by the sound of water on canvas. It was raining. What’s more, Matt and I were on the rota to cook breakfast (without proper shelter). Luckily for me, by the time I was out of the tent, Matt had already got the sausages going and leader Aran was preparing a giant omelette to share with the vegetarians amongst us. 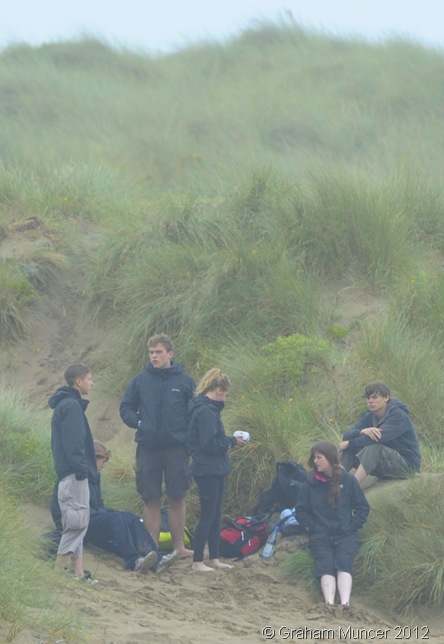 Once everything was tidied away, it was confirmed that the ‘beach day’ plans would go ahead, so we drove to Saunton Sands. It had stopped raining, but visibility was extraordinarily low. Arriving at about noon, I bought myself a warming cup of soup and then we had an hour to play on the beach. Some of us jumped over the dunes, and then returned to the others where Madi suggested we played a few rounds of beach rugby. Needless to say, in the first little match, I beat her almost as soon as the starting whistle had blown. Taking on Ed was more challenging, but again I quickly floored him. He then asked for a piggy-back, and we ran along the sand before returning to the rest of the party and suggesting we headed to the minibus for our lunch. Danni, claiming she wasn’t hungry, agreed to stay with the bags, but we did bring her back a bag of crisps to keep the wolf from her door. 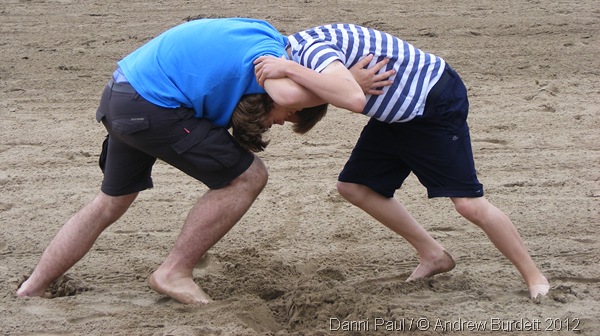 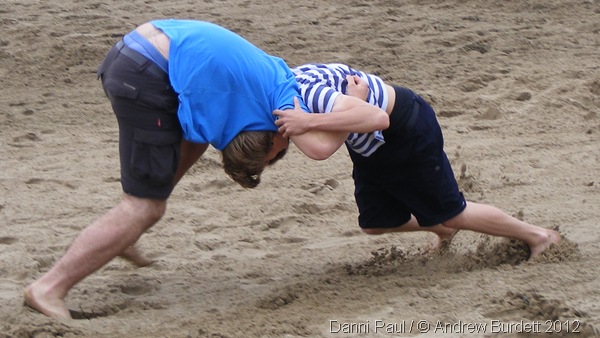 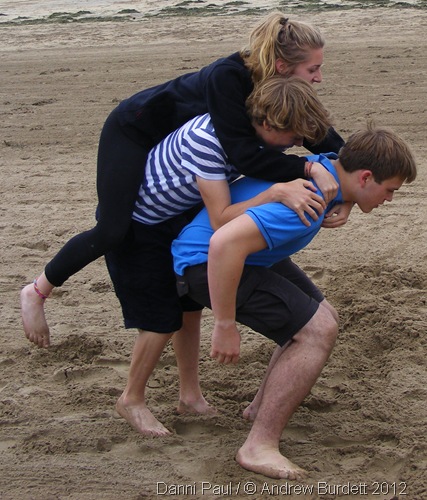 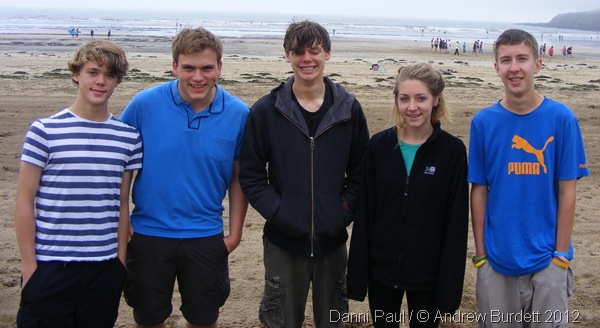 Just before 2:00pm, we met our surf instructors, changed into the supplied wetsuits and rash-vests, and collected our boards. We were advised to partner up to carry the surfing boards down onto the beach, either carrying the fronts of the two boards or walking behind and carrying the back. On the sand, we were given a ten-minute introductory talk, where we were shown the basics and told what to do if anything were to go wrong. That was it – we were left to walk boldly into the waves, where we surfed for the best part of the next two hours, under the watchful eye of our instructors. We weren’t quite Hawaii Five-O, maybe more ‘Devon Four-and-a-bit’… but it was immensely exhilarating. 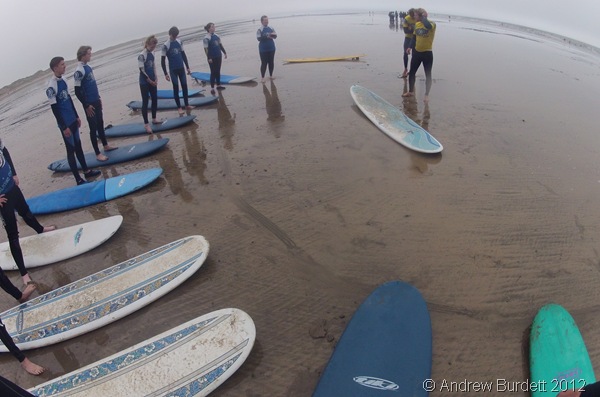 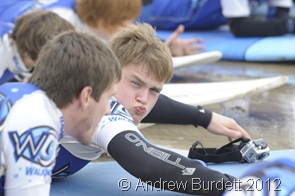 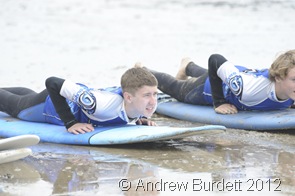 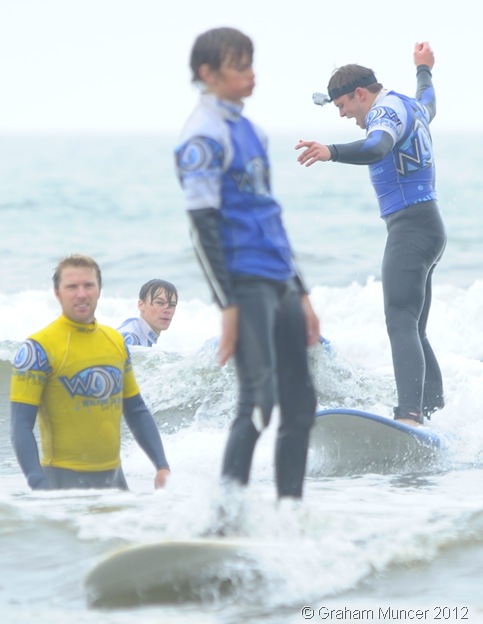 I was wearing on my head a GoPro HD Hero 2 professional video camera, allowing me to get some footage and photographs from the water. It was the first time I’d ever really used it – apart from for getting a time-lapse shot that I put into that video of Mallow Park’s Diamond Jubilee street party – and although I’d attached the LCD BacPac add-on (meaning the user gets a viewing screen), it wasn’t much use when I was busily trying to catch the waves. Even so, I was quite impressed with the results, and I’ve learnt techniques in how to use it for next time. The surf instructor at the start of the session warned me that a similar device worn by a previous client had fallen off after a particularly big wave hit him and it, and the camera was never seen again. He suggested that, in the future, I attach the GoPro to a floating cork and string, just in case. Once the SD card filled up, I surrendered the camera to Graham and was able to then just enjoy the water. 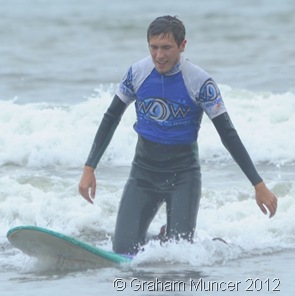 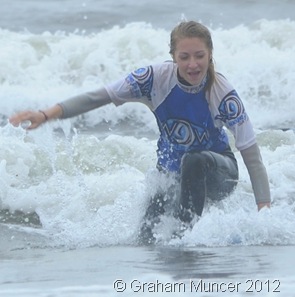 I never quite repeated the satisfaction that I gained on the second wave I caught, where I stood up in one clean move (perfecting an advanced technique for going from a chest to feet–base on the board) and ‘rode the wave’ for a good fifteen seconds or so. After the session everyone said that I’d managed to catch more waves than them, the extent of the truth of which I don’t know, but it was certainly a wonderful afternoon. 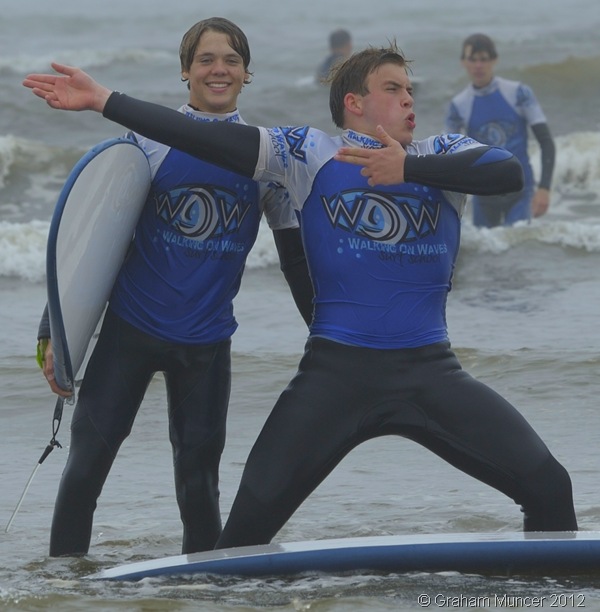 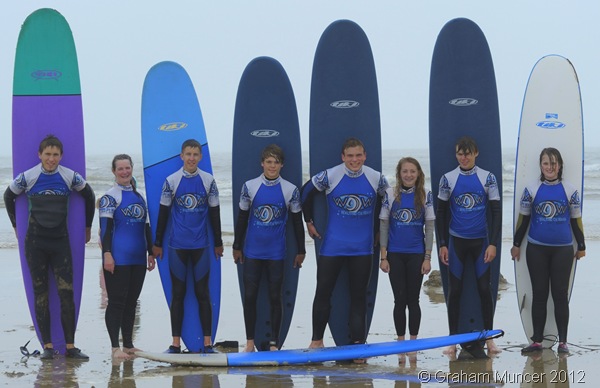 We smiled for the customary group photograph with us and the boards, then moved the equipment back up to the trailer in the car park we’d borrowed it from. The showers at the beach were very basic, but the cold water at least helped remove the salt from our bodies. 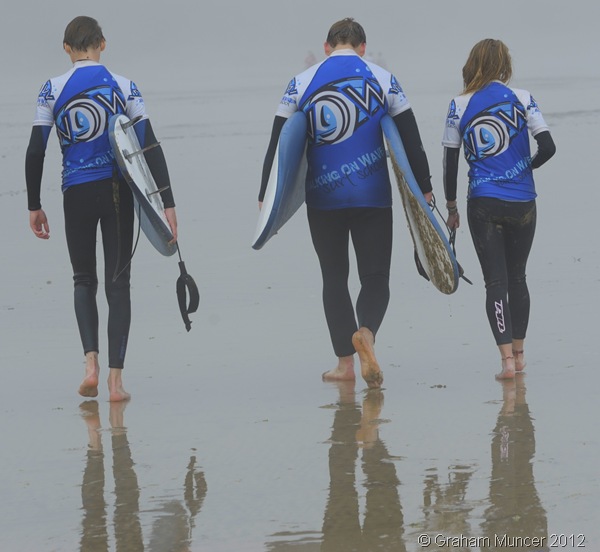 After hot drinks in the back of the minibus, it was off to Lynmouth for our takeaway tea. Never have I had fish-and-chips as tasty: the chips weren’t at all greasy, the cod was so tender and flaky. Whilst we sat, looking at the water, sitting on the sea walls, a lady got out of her extremely messy car and started removing takeaway boxes from the bin, feeding the crumbs to the seagulls. It was very strange, especially considering the nuisance that seagulls are (they’re commonly referred to as rats with wings), but we let her get on with it, trying not to laugh. 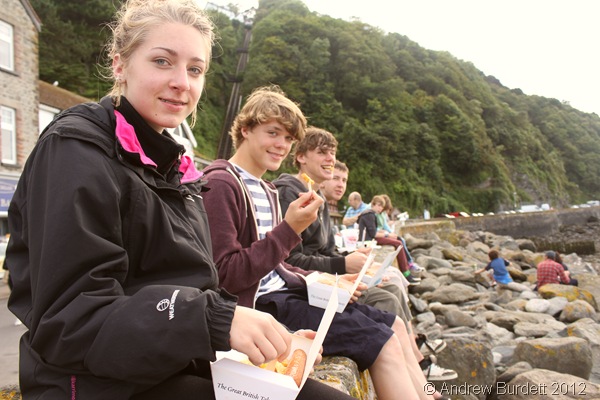 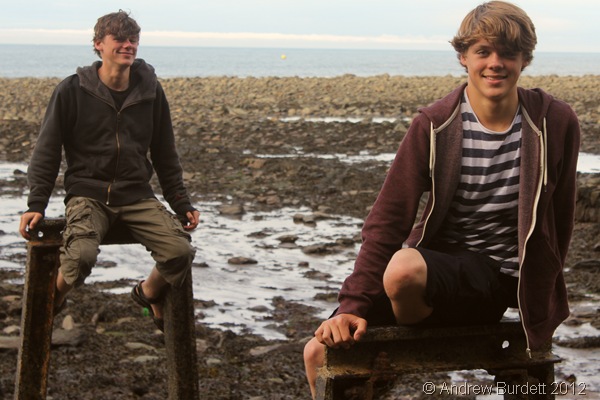 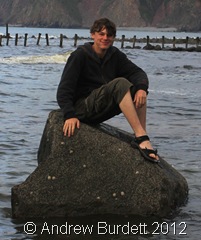 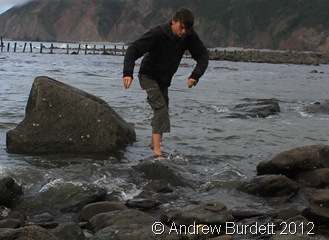 We ran down the rock field to the waters-edge, where I stacked some pebbles in a similar fashion to some that I’d seen in Mousehole a couple of years ago. The tide now coming in, Josh very nearly got stuck on the rock he was sat on, but fortunately managed to get off just in time. All of us desiring ice creams, I asked Graham to unlock the minibus so that we could get our wallets. He kindly cooperated, and we then queued up in front of the ice cream shop’s scooping freezer, debating which flavour to get. 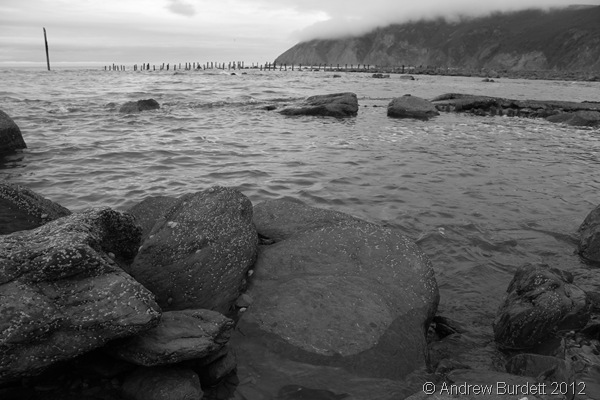 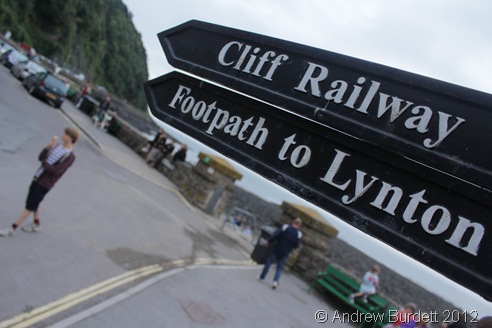 At 6:00pm, Josh, Ed, and I decided to run up the hill to Lyntown. At each of the three bridges along the footpath we called down the valley to the others, who were sat on the wall. It was a good, steep walk up, and I felt my legs working hard. I jokingly said to Josh who was behind me: “Look at my calves and weep, boy!” 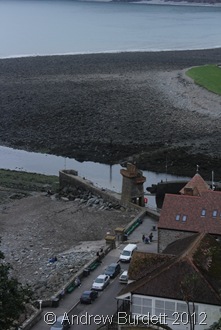 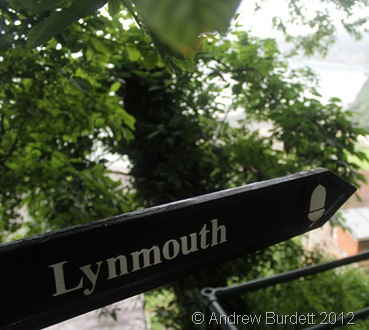 At 6:18pm, I realised a problem. We were due back at the bus at 6:30pm, and there was no grassy hill to quickly slide down like we had done in Ilfracombe. There seemed, therefore, no other option than to take the Lynton and Lynmouth Cliff Railway, a water-powered funicular railway. Although the track was most evident, it wasn’t immediately obvious how we got on it, but the carriage ‘driver’ shouted down some directions to us, and after running through the wonderful town of Lynmouth, we found the ‘station’ at 6:22pm.

“What time does the next train leave?”, I said. “Ahh, about five minutes.”, the man replied. Five minutes later, the ‘driver’ was still chatting to a couple. Josh politely said, “Excuse me, we’ve got to be back at the bottom at half-six. That’s three minutes’ time. How long will it be?” “I’ll get you down for half-past.”, the man replied.

Very shortly after that, the brakeman moved to the front of the railway car and we began descending the 58 per cent gradient hill. 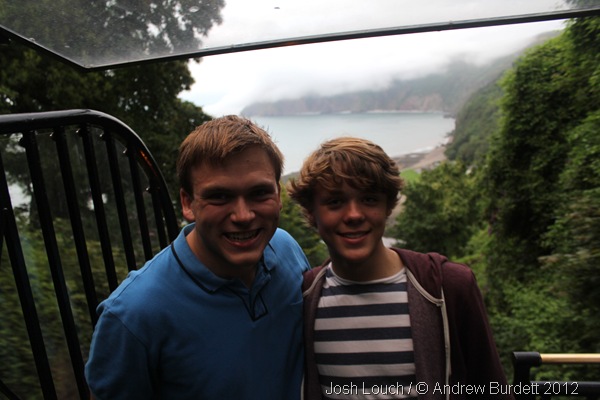 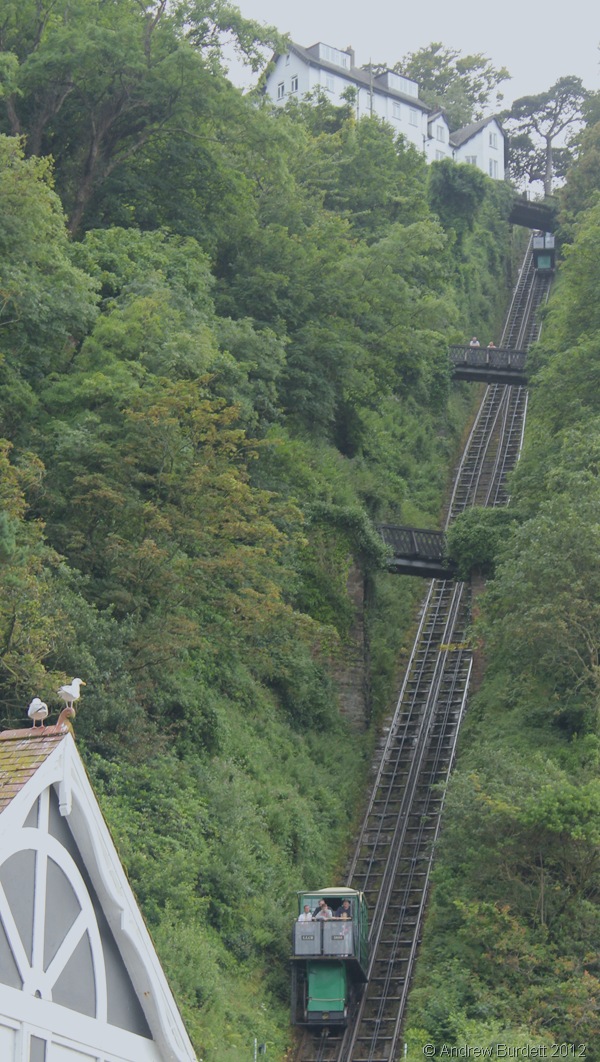 True to his word, we were back at the bottom on the dot of half-past, even if we still had to pay and to run back to the minibus. Graham teased us by pretending to drive off as we neared the bus, but let us in and forgave us for being a couple of minutes’ late.

When we pulled up onto the Collard Bridge Campsite driveway, there were more car park spaces than there’d been when we set off, as the Bradford Scouts had now left after their week-and-a-half-long camp. I read some of the day’s paper while waiting for Madi and Josh to shower (the poo issue had now been, well, cleared up), then Ed and I went up to join them for our midnight-picnic.

“Where are you two going?”, the leaders asked us. They were clearly onto our late-night excursions, and though they hadn’t ever explicitly said we mustn’t do it, we still felt a sense of childish naughtiness about going off without saying where. “Urm, to brush our teeth.”, Ed replied. Fortunately, through a series of well-considered alibies and excuses, we managed to get out for our fourth nightly wander. We started by scaling a section of the assault course activity and sitting on the top of one of the obstacles, but when Madi pointed out that, if Graham and Aran were to come looking for us, we’d be better on the more beaten track, we moved to one of the shelters.

At 1:00am, we headed back to our sleeping campsite, to catch some kip of our own before the day ahead.

And what a day it would turn out to be.