After our first night in Devon, I and my fellow members of the Dragons Explorer Scout Unit wake up to a day of on-site activities including orienteering and indoor climbing – and torrential showers on the way back from Tesco. (You can read the first instalment by clicking here.)

It’s hard to imagine my delight when I awoke on Sunday morning to silence: the deluge had finally stopped. Actually, I don’t think it rained at all, really, since we’d left the site the previous night for the fish-and-chips. The ground was, of course, even so still full of the morning dew, but there was that wonderful fresh smell about the air. After changing out of the pyjamas and dressing gown in which I’d slept (in my opinion, good quality nightwear is a must for a happy camper), I peeled back the tent door and crawled out. Madi was already awake, as were a few others from our unit – the rest would emerge over the course of the next twenty minutes, once the porridge Madi had been supervising was hot.

Once we’d cleared away the breakfast things, the leaders arranged the six of us into three pairs. It’s in these pairs that we’d carry out the vast majority of the necessary chores of the camp, from purchasing food and cooking meals, to cleaning the dishes and the site toilet blocks (though these latter two tasks would obviously not be completed at the same time, nor with the same cloths). 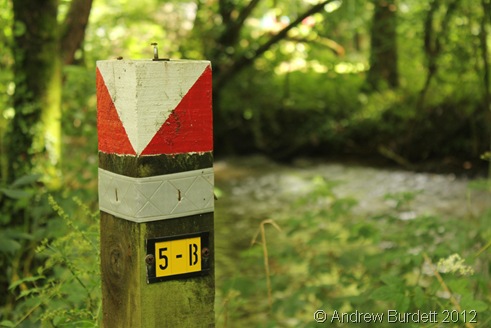 However, the first activity we’d be completing with our new partners (in my case, long-term Scouting buddy Matt Keen) was an orienteering course. For those not familiar with the sport – no, nor was I, until my sister became the Women’s Captain of the Cambridge University Orienteering Club – one uses a topographical map and a compass to navigate a course set out over a variety of terrains, trying to pass every point in the shortest time, by continuously making decisions about one’s route. Although, as I say, true orienteering fanatics run the course, we all decided to complete the activity at a slower, more sedate pace.

Each post we passed had a letter marked on it and our task was to record each letter, then rearrange the resulting nineteen characters (including spaces) to form the name of “a famous figure in Scouting”. Frankly, this was not the most subtle clue to have ever been given out, and it became clear from the start that the solution would be ‘Robert Baden-Powell’ (the founder of the movement), but we all enjoyed exploring the site in our twos. Whilst wandering through an area of woodland, Matt and I spotted a sign that read, in large, block capitals: ‘Shooting range. Do not proceed if the red flag is flying.’. Unfortunately, there was no indication of quite where the red flag would be flying if there were to have been one, so, unable to see even a flash of red, we were left to assume that it was safe to continue on the path. It was only when we got to the sign facing the opposite direction (warning of the impending risk to merry orienteerers approaching from the other side of the footpath) that Matt saw the flag – and it was indeed flying. Still, we were alive, so there was no problem. 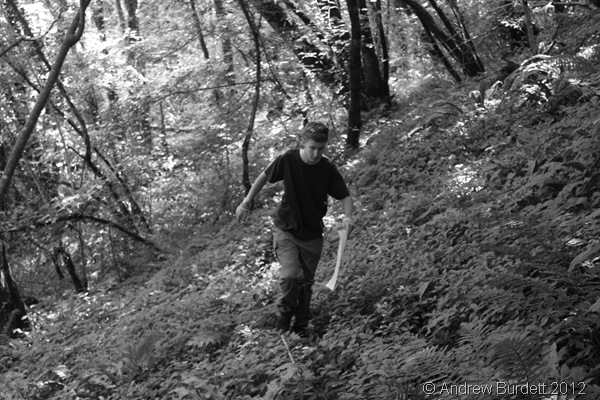 We all finished at roughly the same time, and walked together along the bridge over the marsh onto our little site. Madi suggested we all sat in my tent’s porch, and there we chatted about, among other things, the campsite features we’d just discovered. 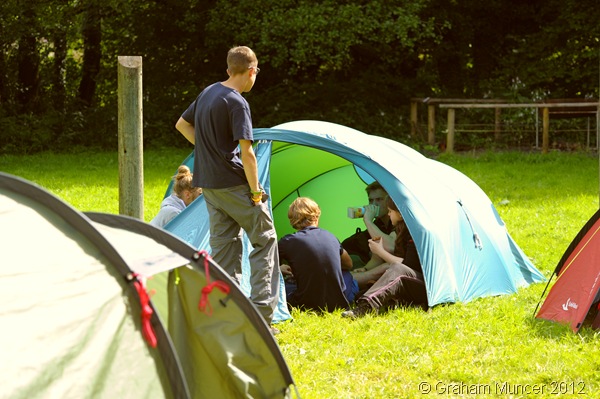 Leader Alex called us over to the shelter structure on the ‘main road’ that runs through the site, so that we could eat our lunch on the benches there. This was an order that was met by reluctance from some members of the group, who were quite comfortable where they were sitting already. However, when I got up and suggested we did move, the rest the group soon followed. We all helped lay out the lunch things, but I brought along the packed lunch I’d left uneaten on the drive down, so enjoyed that instead. 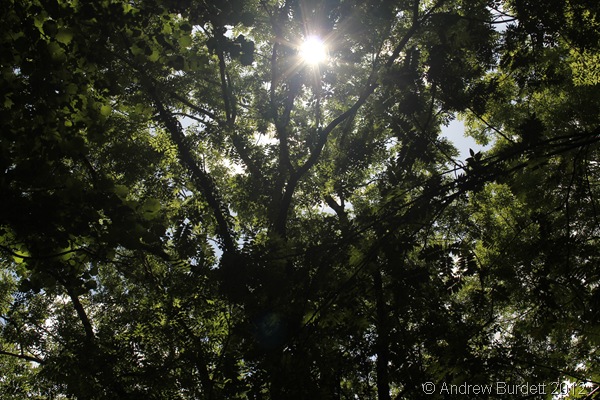 Mercifully, the rain had held off all morning: more than that, the sun was out, and I was at first a little disappointed when I realised that I’d have to miss some of the afternoon’s fun, for I’d instead have to help with the day’s Tesco run (a duty to be completed in the working-pairs we were put into in the morning). Although things changed slightly, with a couple of showers while we were in the store, there was nothing quite of the previous day’s magnitude. 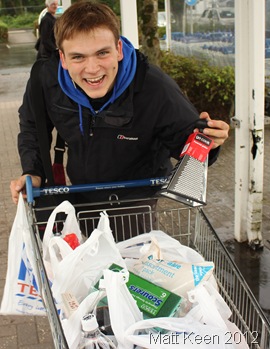 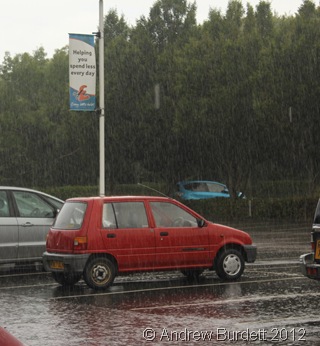 That was until we pushed our trolley out of the sliding glass doors. The heavens opened like never before. “A passing shower;” Graham optimistically said, “We’ll just wait a couple of minutes for the rain to stop, then we’ll push the trolley to the car; saves getting everything wet.” But a couple of minutes later, and the rain hadn’t stopped. If anything, it was worse. Realising there was no sign of it slowing, Graham moved the car closer to the path and, in one slick, fast move, Matt and I opened the boot and deposited all of the shopping bags into it. We shut the boot, ran the trolley back, then dived into the car and slammed the doors. We were just about dry.

Driving back, Graham (who knew the area well, having spent a lot of time as a lad with his grandparents in their North Devon house) admitted he’d “never seen it like this”. So heavy, in fact, was the rain that I mistook a brick wall for a kind of decorative water-feature, as the excess amount of rain water from a sloping car park – too much to escape through the drains – cascaded down the brickwork. 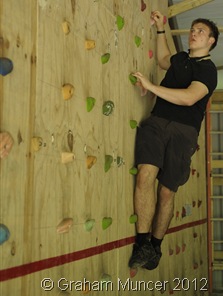 I later found out that, back at the campsite, there’d been none of the ‘fun-in-the-sun’ I’d been worried about missing out on. Apparently, ever since the showers began, the unit had been sheltering inside another of the permanent shelters: the linear bouldering hut (an indoor climbing wall), in which we eventually found them. I declared my intention to have a go, instantly prompting seemingly over-the-top announcements from leader Aran of my need to put down crash-mats along the base of the wall, in case I were to fall the mighty three-foot distance to my death – rules by which I did abide. I wasn’t that bad and, feeling strong and physical, I then moved discretely to the back of the hut where I started doing press-ups and other exercises. I looked up to see eight pairs of eyes looking back at me, and one of the girls approaching with a view to try and sit on my back as I moved myself up and down, but I decided that I’d had enough. Besides, the rain had finally stopped. 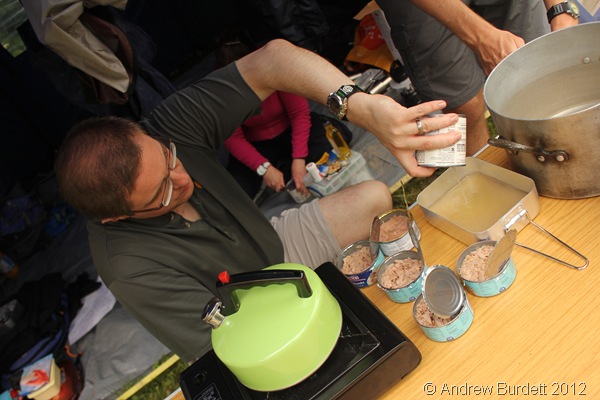 We began work on a variety of tasks, with a small team extending the length of the duckboards crossing the fast-worsening quagmire that was the site’s footpath. Matt and I, however, started cooking a pasta/tuna/sweetcorn dinner. Although altar-fire facilities existed, and some fellow Scout groups even made use of the campsite’s brick ovens, all our cooking was done on our own gas hobs (we had two sets of two hobs, plus Aran’s surprisingly brilliant personal gas-canister-powered hob for her kettle). Although once they were going they were invaluable, the hobs were a real pain to light, and whilst preparing the cheese sauce for our dish I found myself stirring the mixture in vain. Nothing was happening. It didn’t matter how much muscle I put into pushing the spoon around the saucepan, filled with packet-powder and fresh milk, it just stayed exactly as it was. Lifting the pan off the ring, I realised that there was no heat emanating at all. I relit the hotplate and started again: this time, the cheese sauce thickened almost instantaneously.

The dish we’d prepared, rather amazingly, filled even the hungriest of bellies (just as well, as we’d forgotten to show any attention to any form of dessert when we’d been shopping earlier). Washing up took shockingly long, despite Madi’s help with the drying, while everyone else just sort of sat there, lifeless. They weren’t necessarily tired, I don’t think, just (dare I say it) bored. Graham agreed, therefore, to drive us all to Croyde, for another evening on the beach like the one of previous. 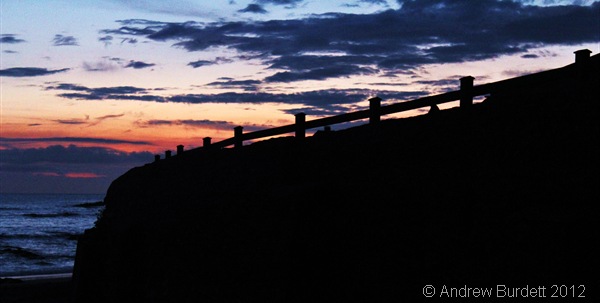 The car park we initially stopped at, under recommendation from Josh and Ed who claimed to have recently stayed nearby, turned out to be over half a mile from the sand, so we all got back in and parked much closer. We enjoyed another 45 minutes on the beach, with my ‘disciples’ and I holding hands and running in the post-sunset glory.

Once back at the site, I vowed to have a shower and was pleasantly surprised by the temperature of the water. After drying my body and hair, I had a shave and rapidly felt a lot better, in the knowledge that I was clean and fresh (even if I had that lingering thought in the back of my head that reminded me I’d quickly be dirty and wet again). On stepping out of the washing facilities, I was greeted by a rather overwhelmed Josh, Ed, and Madi, who’d been ‘enjoying’ a conversation with the Scouts from Bradford. Their accents were just as thick as their leaders’, but their language was (completely unlike their elders’) at times quite rude. That said, I didn’t take any hurt from being called “well posh” by one particularly lippy young Scout, and decided to play up to the group’s perceptions of our Home Counties tones by subtly dropping in non-day-to-day vocabulary. (Once the conversation ran dry and the children finally left us alone, we playfully agreed that we’d all speak to each other in much less ‘grand’ dialect if we were to ever pass them again, so as to confuse them completely.)

I’d had an idea that it would be nice, given the dry conditions, to go for a night-time wander of the site. With Madi, Ed, and Josh the only ones still up, I invited them along too, and we set off to the main part of the site together. We enjoyed a pleasant couple of hours, then returned to our area to silently zip up our tents and go to bed, hoping no one (not least the leaders) had heard us.