In the first instalment of my daily Explorer Camp Diary, our unit drives to Devon, is greeted by miserable weather, but attempts to set up camp regardless. I learn the joy of tea, meet a lovely Scout group from Yorkshire, and make a fuss about the size of the tent I was lent. (Readers of this post will notice the lack of the ‘brilliant photography’ promised – you’ll see some of that once the rain stops.)

With a great deal of imagination, one can just about picture our campsite for the week, Collard Bridge in Snapper (a North Devonshire hamlet, three miles from Barnstaple), in its full glory. The River Yeo would quietly trickle along an edge of the 21 acres of mixed woodland and meadow that make up the site, with a full range of Scouting activities offered without leaving the gates. The only thing that disappointed us, when our two-vehicle fleet pulled up, was the weather. 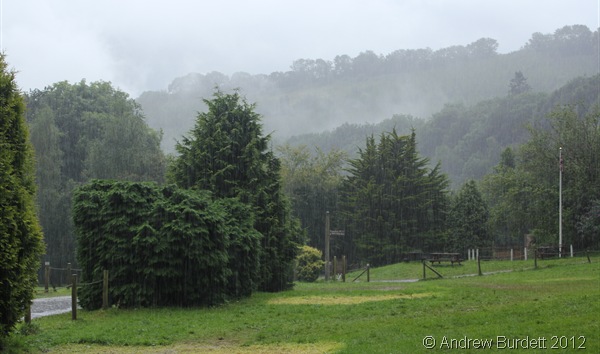 The rain was pouring. Every bit of ground was sodden. And it was getting worse – there was no sign of any stop in the waterworks. Tellingly, the river was already gushing – truly frighteningly fast-flowing – suggesting the season’s weather had already been poor. 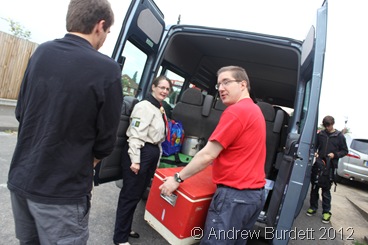 It hadn’t been a bad journey down by any means. Slow, yes, in our speed-restricted, weight-limited  minibus, but tolerable. There were only six Explorers from our usually fifteen-strong unit, but conversation was brisk. We’d met at 8:00am, packed our bags and unit kit into leader Graham Muncer’s Ford Galaxy, and were on the road by 9:30am. Just before noon we stopped at Gordano Services on the M5, where I refuelled myself with coffee and a croissant, but I wasn’t hungry enough to want the large packed lunch that my mother had sent me off with.

It turned out, though, that the Americano and pastry I’d treated myself to was to be the last meal I’d have for hours. Because of the strict 900kg maximum load rule on the hired Transit minibus, we hadn’t been able to afford the weight of taking with us any unit food at all, and as a result we were going to have to find a supermarket as soon as the tents were pitched.

As Matt helped the three leaders put up the canvases (they were each assembled under the shelter of a large family-style tent we all put up initially, and then taken outside to peg down into the ground), the remaining five of us went in search of wooden pallets to raise some of the communal areas off the mud. The campsite’s woodpile, large in size, felt terribly precarious to stand on, due to the flimsiness of the soggy timber on it. As the rain became heavier and heavier, I decided to ask the leaders for the keys to the minibus, so that we could seek refuge as the worst of the weather blew over. 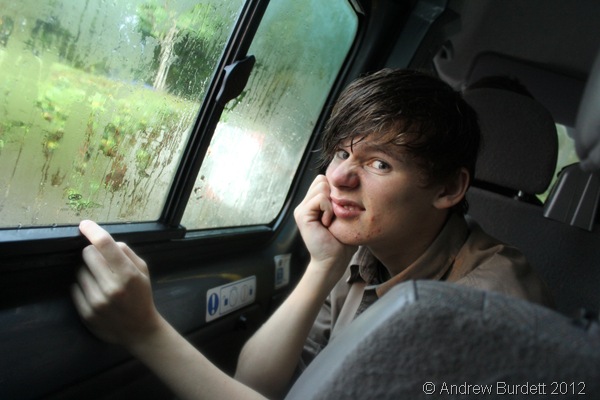 Whilst in there, a bearded man in his mid to late-20s, looking like he’d arrived at the campsite clean-shaven many days ago, came and banged on the window. Trying desperately to communicate with us through the window, he looked more like a goldfish, with all the sound  that he was producing being lost to the far louder noise of the rain hammering down on the tin lid of the minibus. Clearly realising his defeat, he let himself in through the driver’s seat door and turned around to speak to us properly.

I, naturally, was the first to respond to the man. I introduced myself and the group, explaining the fact that the other young member of our unit was still exposed to the harshness of the external elements, establishing our camp with the leaders. I told him of our hideously slow and tiring journey from our Cookham Road hut. And, spotting a potential opportunity to be invited for what I really wanted, I told of our lack of anything consumable: especially tea. My subtle hints were rewarded. “Whaa don’t yous come down t’ arr tent – we got a brew going.” Result!

Once we’d carefully avoided slipping on the bootprint-marked mud track onto their site (I was right about my leader beard-growth prediction – our camp neighbours had been unwittingly ploughing the earth on their part of the campsite for a week already), we found our way into their large mess tent. Essentially the headquarters of their eleven-night camp (they would leave on Wednesday), they’d neatly arranged everything in their marquee into a cooking space, a dining area, and a kind of medical corner. We had nothing like that, merely a white teepee (yellow with age) that was such an inconvenient shape we would spend much of our own next seven days cramped up inside it with our backs touching the wet ‘walls’ and the central pole obstructing our view of each other.

Happily, though, our complaints about everything so far – Aran’s (at times) hair-raising driving of the bus, the convoy getting lost en-route, the relentless rain, the distance between our tents and the loos, the still pouring rain, our already filthy boots, the even still unending rain – everything was forgotten. Why? Because in our hands were hot mugs. There is a line in Joe Simpson’s Touching The Void in which he, having been left for dead by his co-climbers, agonisingly crawls back to base-camp with a ruined knee (an element of the story that would become even more relevant to my own by the end of my time in Devon) to be greeted by a cuppa’. Only now could I understand the real cause for the exclamation marks: “Tea! Hot tea!”. Having mocked the book during my GCSE English course for its, in places, crass writing, this was the first time I felt empathy for the book’s author, fully able to appreciate the delight that the warming drink would have brought him. We still had no teabags of our own, but “you know where to come”, one particularly warm leader said, “to find some, if you ever need them”. Thanking them greatly for their kindness, but not at all in an unctuous way, we left to the now lighter drizzle to see the progress of our camp. All the tents we’d use were now pitched, but I must admit that I wasn’t fanatical about the one that had been kindly offered to me by fellow Explorer Danni.

“It’s tiny,” I protested, “I mean, seriously. The world’s biggest, fattest man has a bedroom the size of a shoebox. I’m sorry, I’m never going to fit in that, and certainly not with all my kit.”

“Beggars can’t be choosers.”, Danni replied, having taken light offence to my rudeness about the thing she’d earlier (I think unjustly) claimed was for two people.

Sensing the increasingly hostile mood to each other and, above all, the weather, Graham decided that making us cook without real shelter would not be the most popular decision. Instead, he told us all to get into the minibus, in which we’d head to buy a fish-and-chip supper and to find somewhere dry to eat them. We’d leave our kit in Graham’s car boot, where it had remained since our departure in the now distant dryness of the Maidenhead morning, until we got back.

On the way, we stopped at a Tesco store, where the sight and smell of the huge amount of food was somewhat overwhelming. Loaves and loaves of bread piled high. Chocolate bars in a seemingly endless supply. Copious amounts of confectionary. Though we were meant to stay with the leaders and the trolley, informing Aran, Alex, and Graham of the foods we were and were not prepared to eat, I reasoned that my unfussiness and I’ll-eat-what-I’m-given attitude was suitable excuse to allow me to create my own shopping list of an altogether sweeter taste. I don’t mean to boast, but in general whatever I did influenced the rest of the party, and soon my basket and I were joined by Madi, Ed, and Josh (a core group that would go on to earn the nickname of my ‘disciples’, due to their following of me and my actions) who convinced me, through repeated claims of their love for me, to fork out the quite hefty price of 50p for a soft football.

In the warmth of the minibus with its steamed-up windows, we ate our takeaway tea, then got out to race up and down the sands at Saunton. We ran side-by-side along the beach as we tracked the incoming tide, in an moment reminiscent of the famous scene from the film Chariots Of Fire – an image that had become well-known of late due to the re-release of the original movie, a version of the story being tailored for the West End stage, and a spoof clip featuring Rowan Atkinson becoming the highlight of the Opening Ceremony for the ongoing London 2012 Olympic games. The big news for us in Devon, though, was that the rain had finally stopped. 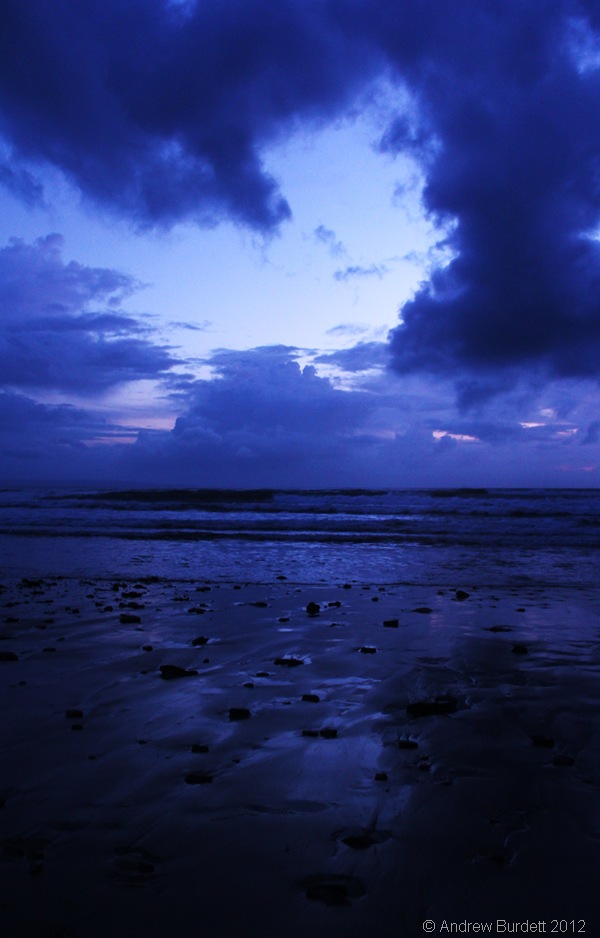 Even though it was dark by the time we got back to the camp, it was at least still dry. We decided, therefore, that there was no better time to gather our things from Graham’s car and move into the tents, as this would avoid postponing the task until the morning’s daylight, when, if the rain were to restart, our week’s-worth of dry clothing would get soaked. However, as soon as I’d delicately pushed my holdall to the farthest edge of Danni’s “two-man tent” (read here: small coffin), my earlier worries about my own ability to fit in were proved to be well-founded. It was now no longer a matter of personal preference. There was no way that I, of all people, was going to be able to lie down – even vaguely comfortably – with my massive bag in there too.

To my relief, I knew that Graham had brought with him a spare, supposedly three-man, tent. I think partly because of the undeniable obviousness of the problem, it took far less effort than I’d been expecting to need to promote the virtues of a bigger tent for a bigger chap. And so, not too long before midnight, the unexpected final tent of our camp was pitched. It was mine, on the one condition that I shared it with someone else – something I was initially vehemently opposed to, knowing from experience the much-increased ease of possessions to become lost, or the exaggerated likelihood of the tent becoming dirty.

My tent, my rules. My ‘roommate’ would have to promise to keep the place orderly; to keep the zip shut at all times; and, most importantly, to keep absolutely everything muddy outside the tent. Josh agreed to all of these terms so I welcomed him in, and we laid down our roll-mats and sleeping bags before heading off with Madi to brush our respective teeth.

In his stupidity, though, he’d decided to wear a pair of flip-flops. Amazingly, he did just about manage the 500-metre muddy walk to the washing facilities, but it was on our return that his foot squelched so deep into the mud that he required the use of my arm to pull himself out. I then helpfully volunteered to wash his ridiculous footwear in the river water, in an effort to clean the worst of it off a little – knowing if I didn’t, excess mud would eventually get trodden into ‘my’ tent anyway. At one point, while leaning out too far from the bank, I nearly lost my footing, but thankfully Madi jerked her arm out to grab me (without thinking of the risk to herself) and saved the day.